AEK Athens was able to frustrate Ajax in the Johan Cruijff ArenA for exactly one half. After a quick opening goal after half-time, Ajax showed its abilities against an AEK that might not be a Champions League worthy opponent.

Ajax had some demons to shake off tonight. The past four years were rough, from a result-based point of view. PSV (three times) and Feyenoord (once) won the last four Eredivisie titles. Four years without a domestic championship will bring some pressure in Amsterdam.

And, even though the Cinderella run in the Europa League of 2016/2017 under the guidance of Peter Bosz provided some unexpected international cachet, the performances on the highest European stage were even more disappointing than the domestic ones, with Ajax missing out on group stage qualification of the Champions League three years straight.

And so, director of football Marc Overmars did something he was so averse to in the earlier years of his tenure: he spent money. And lots of it. The high profile signings of Daley Blind and Dušan Tadić, combined with the retention of all the biggest young talents in the squad, were meant as a clear signal of urgency towards Ajax’ fans.

AEK Athens’ situation can be described as the polar opposite. Last season, AEK won its first domestic title in fourteen years. And in doing so, they saw most of their best players leave. With the departure of center-back Ognjen Vranjes (Anderlecht), midfielder Jakob Johansson (Rennes), creative winger Lazaros Cristodoulopoulos (Olympiakos) and striker Sergio Araujo (back to Las Palmas), each part of AEK’s formation was weakened this summer.

Formations
There was not much need for Ajax’ manager Erik ten Hag to change things up a lot. In eleven official games this season, Ajax won eight and drew three, with an impressive goal tally of 27-5. The only change Ten Hag had to make in his 4-2-3-1 formation was replacing the last-minute injury of Matthijs de Ligt.

A pretty tough task, seeing that the 19 year-old captain is the undisputed defensive leader of this team. Midfielder Carel Eiting came in as De Ligt’s indirect replacement. Frenkie de Jong – of Spanish tabloid, scouting video and hyperbolic tweet fame – slid back from his midfield role to center-back, whilst Eiting joined Lasse Schöne in Ajax’ double pivot. 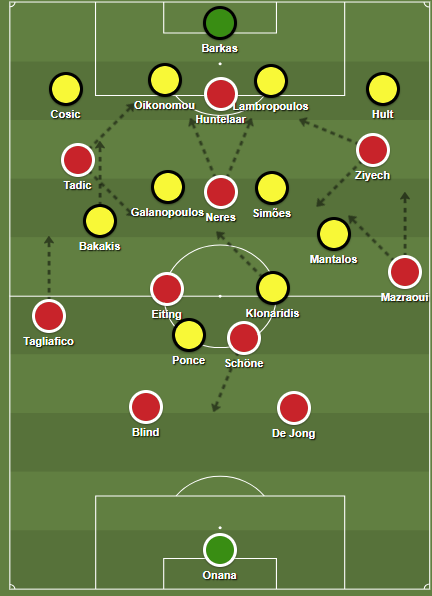 AEK’s new manager Marinos Ouzounidis – who in domestic play has set out to make the team play more adventurous – reverted back to the stingy, defensively tough ways that brought AEK the title. He played right-back Michalis Bakakis as a right winger, so he could add an extra center-back to the backline in Uroš Ćosić. 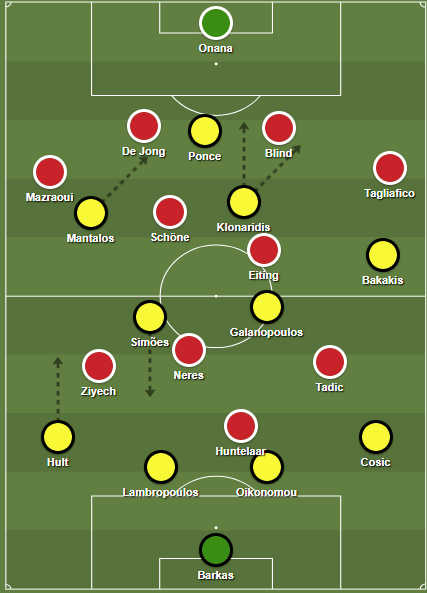 Even though it was rare, this diagram displays AEK’s positioning when they had the ball.

Ajax’ risky build-up choices initially almost backfire
The Ajax of Ten Hag can build up from the back in a variety of ways. The three main variants are: (1) a 3-2-4-1, where left-back Nicolás Tagliafico stays back with the two center-backs, and right-back Noussair Mazraoui joins the attack on the wing, sliding playmaker Hakim Ziyech to a central position; (2) both fullbacks stay behind, creating freedom for one of the center-backs to dribble into midfield, to create an overload in the center of the pitch; or (3) both fullbacks play very high, with one of the controlling midfielder dropping back in between the two central defenders.

With the presence of silky-smooth dribbler Frenkie de Jong in the center of defense, it would be logical to expect build-up option no.2. But because of the deep and very compact 4-4-2 block deployed by AEK, Ten Hag chose the third option. Mazraoui and Tagliafico constantly played high on AEK’s half in possession, with Schöne dropping back in build-up.

Besides self-neutralizing the dribbling threat of De Jong, this bold choice of Ten Hag had another side-effect. If Ajax would lose the ball, the central duo of De Jong and Blind would be put to the test with fifty to sixty yards of free space in its back. Blind is not an impressive physical defensive presence, while De Jong is a midfielder that has little experience playing as a center back.

AEK’s attack had a handful of almost-breaks in the first half, but those were usually snuffed out by Ajax’ aggressive counterpress. Once, in the 28th minute, AEK got a good chance via a counter-attack, but Viktor Klonaridis – whose runs, alongside the dribbles of left winger Petros Mantalos, posed the only viable threat AEK had to offer – failed to test goalkeeper André Onana.

The wrong Ziyech-Tadić connection
Let us not kid ourselves. Ajax’ foremost strength is the vast skill-set of playmaking wingers Ziyech and Tadić. Ten Hag’s whole system is designed to put these two in the most advantageous positions between the opponent’s defense and midfield in the center of the pitch to do as much damage as possible, as often as possible.

The first half was characterized by a lot of passes between Ajax’ wide playmakers. But not the types of passes Ajax would like to see, as AEK’s defensive shape forced Ziyech and Tadić to play lots of long cross-field passes to each other. The central zone of the opposing half was simply too densely packed with AEK defenders and teammates who could not provide depth behind the last line of defense or find space in between. 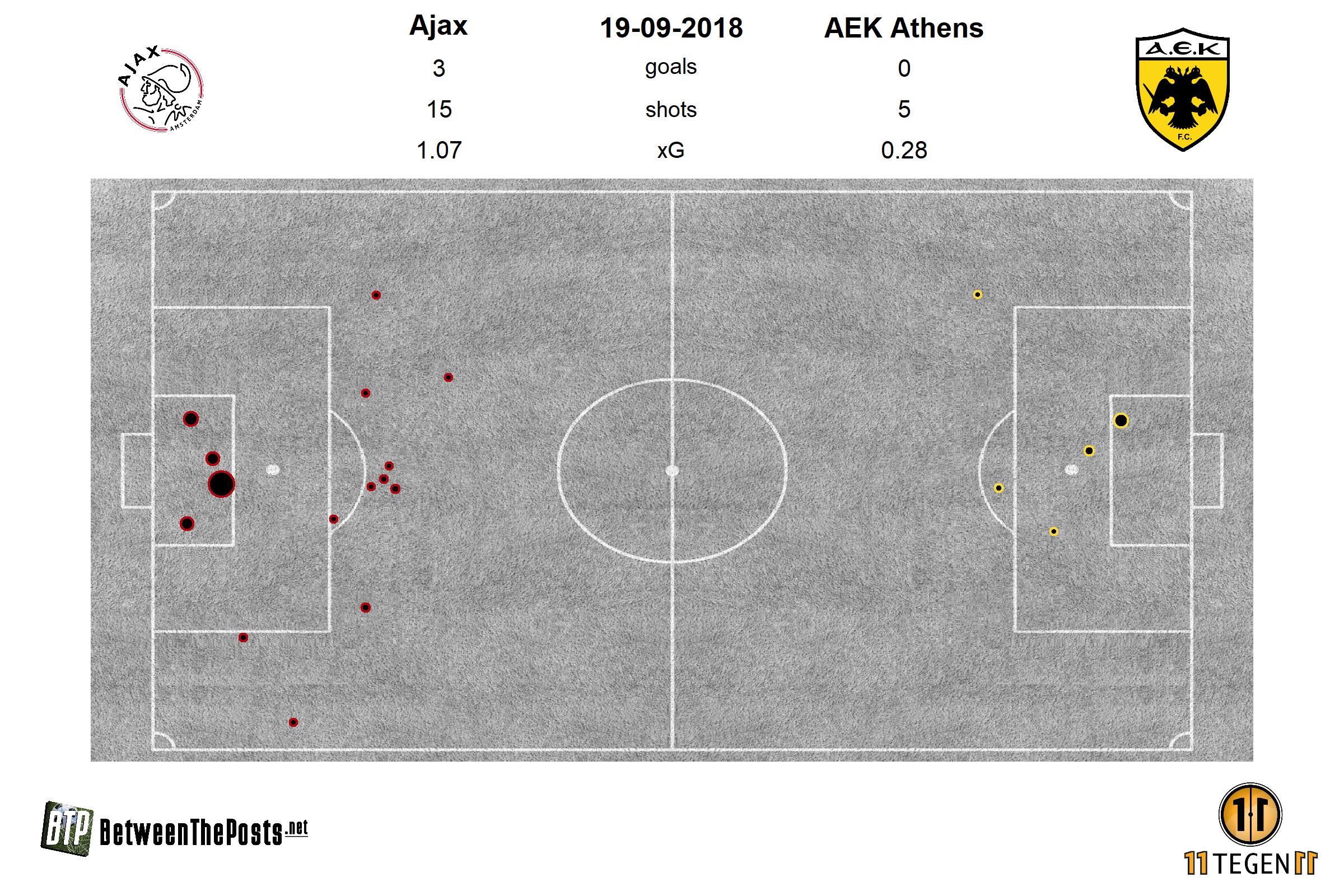 Opening goal has a ‘house of cards’ effect, enhanced by smart adjustments
A goal from a set piece situation broke the game open. Within a minute after half-time, David Neres got hold of a semi-cleared corner. The Brazilian lofted the ball into the penalty box, where left-back Tagliafico took advantage of some poor defensive positioning of Marios Oikonomou to open the score. The Greek center-back opted to man-mark striker Klaas-Jan Huntelaar, while all of his teammates played an offside trap.

The game loosened up for Ajax after Tagliafico’s opener. Not only because of the opening goal. Ten Hag made a couple of very subtle adjustments, that freed up Ajax’ options for positional play quite beautifully.

Eiting, who in the first half often remained in very close proximity to co-midfielder Schöne, was given license to drift forward behind AEK’s midfield line ánd to drift wide left in the controlling zone of midfield – one of the patented positional moves of De Jong, who usually plays in this position. Striker Huntelaar was also given more positional freedom, frequently dropping back ten to fifteen yards more into midfield in the second half.

The altered positioning of Eiting and Huntelaar freed up a lot of new central spaces within AEK’s block to explore for the three creative attackers Neres, Ziyech and Tadić. The Greek champions, urged by the 1-0 scoreline to attack a little more adventurously, could not cope with the newfound positional freedom for Ajax’ creative trio.

An effective press as the cherry on top
The advantageous offensive situation for Ajax did not change when Huntelaar had to come off injured for midfielder Donny van de Beek. Tadić took up his spot in the center of attack, Neres shifted to the left and Van de Beek would play in his traditional spot in central attacking midfield. Van de Beek provided what he usually does: dynamism in combinational play and smart runs into the box.

One of those patented box-runs was rewarded in the 77th minute, when Ziyech found Tadic between the center-back and left-back zone in the penalty area, from where the Serbian playmaker dropped in a beautiful short cross with his weaker right foot to a wide open Van de Beek at the opposing post.

Ajax’ 2-0 was earned after a long spell of very effective pressing of AEK’s build-up, who could only escape the Amsterdam high-press trap once – the ensuing four against four attack was suffocated by a tactical foul from De Jong on Mantalos.

The good news did not stop there for Ajax. A minute after the deciding second goal, striker Kasper Dolberg made his first minutes for Ajax since May, having dealt with a whole bunch of injuries since the start of this season.

Left-back Nicolás Tagliafico solidified his status as a fan-favourite amongst the Ajax fans by scoring a beautiful 3-0 in stoppage time. The Argentinian fullback was launched on the left wing by a classy lob pass by Eiting – who dominated the second half with efficient passing – and finished elegantly from the left side of the box into the far corner with a lob ball.

Takeaways
Ajax plays PSV in Eindhoven on Sunday. The level of play against AEK and in recent weeks should fill Ajax with some much-needed confidence for this crucial early-season domestic matchup. The main worries will center around the fitness of De Ligt and Huntelaar.

If AEK wants some semblance of a chance to finish third in this Champions League group, manager Ouzounidis will need to make a more rigid decision than he did tonight. Either totally embrace anti-football and try to steal a couple of results, or play with some more attacking intentions.