This game was fun, y’all. Really, really fun. Some smart tactical tweaks, a few brilliant goals, some of the most gifted young players in football, two bizarre red cards and a whole lot of twists and turns in the final minutes. Bayern look steadier than they did a month ago. While this very young Ajax squad seems to be legit-legit, as in: a team deserving a spot amongst the world’s sixteen best teams.

Even though PSV are still leading the Eredivisie table – albeit by a two-point margin now, after a defeat to Feyenoord – Ajax have been able to breeze by opponents in full cruise control-mode in their domestic league. Even though the total scoring margin in their last three games looks impressive (12-2), Ajax have not played their most inspired football in their own league lately. They were clearly looking ahead to this game: a chance to, shockingly, win this Champions League group, if they would be able to defeat Bayern in the Johan Cruijff Arena.

Manager Erik ten Hag tried to do so by opting for a starting eleven that was very similar to the one that grabbed a deserved point in the game at Bayern (1-1). In Ajax’ usual 4-2-3-1 formation, deep-lying playmaker Lasse Schöne was replaced by center-back Maximilian Wöber, with Daley Blind joining probably-PSG-bound Frenkie de Jong in the double pivot. 4-2-3-1 is one of the most frequently occurring formations in football. The two most defensive midfielders are called a ‘double pivot’. Up top, Dusan Tadić was reasserted as a ‘false nine’, with striker Kasper Dolberg making way for winger David Neres.

Bayern manager Niko Kovač seems – because of injuries and the benching of a couple of former key players – to have found somewhat of a ‘regular eleven’, as he went for the same squad as the last two games. Leon Goretzka was preferred to Thiago Alcântara in midfield, next to Joshua Kimmich, who seems to be the new ‘six’ in Bayern’s system. Javi Martínez was benched again, as veteran Rafinha played at Kimmich’s former spot at right back. 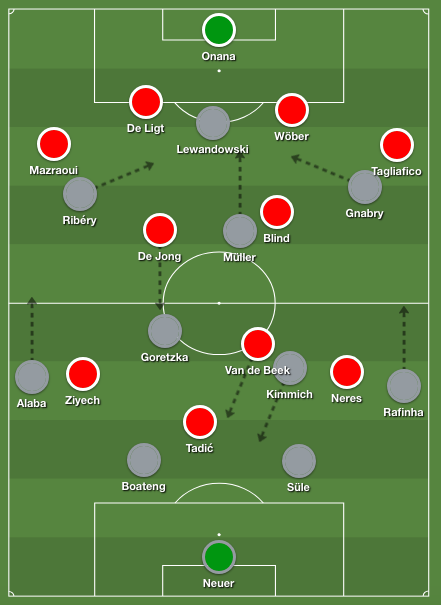 Bayern’s positioning and general movements in their 4-2-3-1 formation against Ajax’ hyper-aggressive pressing.

That this Ajax is more than just a Cinderella story type of team, could be seen by the way Ten Hag set up his squad against Bayern, still one of Europe’s football giants. Frankly, Ajax aimed to press the hell out of Bayern.

Just like the first match, Ajax showed no qualms in collectively pressing the German Rekordmeister on their own half in a very aggressive manner. There were numerous occasions in the first half where there were at least eight Ajax outfielders on the opposing half, when Bayern tried to build up from the back.

Ajax’ counter-press was even bolder. With back-cover help by even the center-backs, the nearest four to five Ajax players surrounding the ball lept forward everytime possession was lost. Which was often in the first half, to be honest, with star players De Jong and Hakim Ziyech making a lot of risky decisions with their passing.

Ajax’ 4-2-3-1 formation was very mobile, as the four most attacking players enjoy a lot of freedom to leave their position and interchange.

After Donny van de Beek scuffed the ball from close range at goalkeeper Manuel Neuer in the third minute, most of the chances in the first half fell to Bayern, who expertly moved the ball to their front four, whenever Ajax’ first wave of pressing was overcome.

Serge Gnabry was the danger man for the visitors. After he nearly punished a very lackadaisical back-pass from left back Nicolas Tagliafico in the twelfth minute – André Onana made his first of many incredible saves – the ensuing corner, after being half-cleared, ended up at his feet. Gnabry set up Robert Lewandowski for the opening goal with a nicely weighted through ball.

Gnabry should have had his second assist of the night in the 26th minute. With Ajax, as they did all game, committing both their fullbacks forward in a rather extreme way, Bayern ended up in a five-on-three counter. Thomas Müller found Gnabry near the back-line, whose low cross found Lewandowksi, but the Polish striker’s attempt found Onana in its way, who cleared his line with the lightning-like quickness only he and a few other goalies in the world possess.

Ten Hag and Ajax made some minor adjustments at halftime, which ended up working like a charm. De Jong was moved to the left side of the double pivot, his regular spot, Ziyech was asked to drift towards central midfield a bit more, and the interplay between the deep runs of left winger David Neres and ‘ten’ Van de Beek and the dropping-off of Tadić became better timed and more concise.

With the adjustments making the short passing game easier against Bayern’s well organized 4-4-2 medium block, A medium block refers to a team that retreats in their own half out of possession, generally only disrupting their opponents some way into their own half.Ajax started to string long spells of possession together. The best one of those came with sixty minutes on the game clock. After two long spells were broken off in the last second by an outstretched leg of a Bayern defender in the penalty box, Ajax strung together nineteen consecutive passes, en route to the 1-1. The eighteenth of those, a nifty semi-no-look through ball by Ziyech onto Van de Beek at the right edge of the penalty area, was the prettiest. Tadić’ finish on a low Van de Beek cross was an easy one.

With the score tied with half an hour to go, absolute craziness ensued. First, a header of Lewandowski (!) from five yards out was denied by a truly YouTube-able or Twitter search-necessary save by Onana. Then, in the 67th minute, Ajax was relegated to playing with ten, after Wöber knifed down Goretzka with a harsh slide tackle.

Bayern’s numerical advantage – and regained grip on the game – was short-lived. Müller was sent off in the 75th minute for ninja-kicking Tagliafico, who he may or may not have seen, in the head.

Truly a game for the ‘impact sub’

The final fifteen minutes (and seven minutes of overtime) after the Müller red card were astonishing. Just seconds after a very nice Bayern attack, where Rafinha slalomed two opponents in Ajax’ box, but then just missed putting the ball on a platter for Lewandowski’s second, Ajax got a penalty call to take the lead. Matthijs de Ligt booted away the danger after Rafinha’s solo, the subbed-in Dolberg chested the ball in true Marco van Basten-esque fashion and laid it off to Blind, who passed to Tadić on the left flank. The Serbian sent Dolberg deep with an outside-to-inside through ball, and the Danish striker, with a deft extra touch of the ball to move it a few more inches to the outside, goaded Jérôme Boateng into a silly challenge in his own penalty area. Tadić absolutely rifled home the spot-kick to make it 2-1.

Dolberg could only lay claim to the title of ‘prettiest way to win a penalty in this year’s Champions League’ for about five minutes. Because that’s when Thiago, who came on in the 62nd minute as an extra midfielder to counter Ajax’ stranglehold on possession in the second half, started a dribble from about thirty yards of the opposing goal, that ended after he played out three Ajax defenders and the fourth one, Tagliafico, crudely mowed the Spanish playmaker down inside the box. Lewandowski coolly converted the penalty, which meant that Ajax had about ten minutes to score the group-winning goal.

But the next goal was for Bayern as well. Lewandowski and substitutes Thiago and Kingsley Coman pressed forward aggressively, but De Jong tried to do his usual shtick in the build-up, which is being unfazed by pressure, taking his time, and to trust his insane amounts of technical finesse. Usually this works, to a brilliant degree even, but this time, he lost the ball playing into midfield. Kimmich was the fastest to the loose ball, and via Lewandowski and Thiago, the ball ended up at Coman’s feet. The talented French winger, who has had some serious bad luck with injuries in his young career, finished expertly in the far corner.

But that was not the last goal of the evening. In the final stages of the match, Ajax were playing with three central strikers in Dolberg, Huntelaar – who came on late as well – and the thrown-forward De Ligt. In the 95th minute, a blocked long shot somehow ended up at Huntelaar’s feet at the right side of the penalty area, with about seven teammates joining him in the box. Huntelaar passed the ball by Neuer, Tagliafico slid in the 3-3. Bizarrely, this was the Argentinian left back’s third goal of the group stage, with right back Noussair Mazraoui scoring two (crucial) goals at this stage as well.

With one or two other bounces of the ball, in this game or the first meeting between these two teams in the Allianz Arena, Ajax could have even won this Champions League group. Which, remembering the form of the Eredivisie teams in European competitions and the Dutch national team in the past few years, is more than any football fan with Holland’s interest in mind could have hoped or asked for at the start of the season. This young team is pretty special, and a couple of these players – Onana, De Ligt, De Jong, Ziyech – will most likely be household names in top European football for years to come.

Things also seem to be looking up for Bayern, right now. In the past couple of games, Kovač’ team finally resembles somewhat of a coherent top side. The decision to play Goretzka and Kimmich in central midfield – even though this means benching the brilliantly gifted Thiago – seems to provide the team with dynamism in the build-up and some versatility and athleticism when transitioning from attack to defense, things that were severely lacking earlier in the season. The emergence of Gnabry as one of the team’s newest stars is also a hopeful sign for FC Hollywood. Dortmund should be warned, the title race in the Bundesliga is far from over. 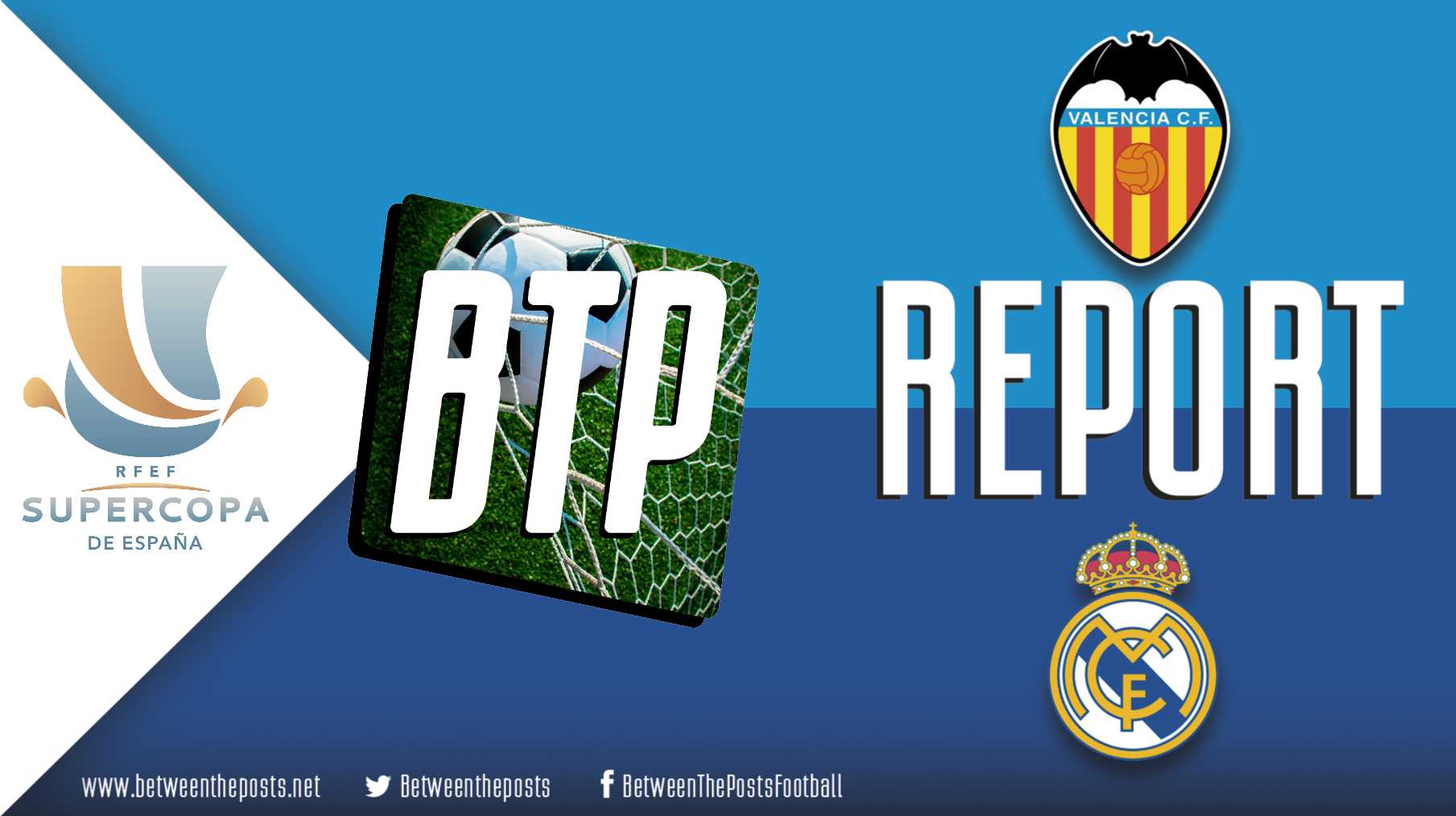 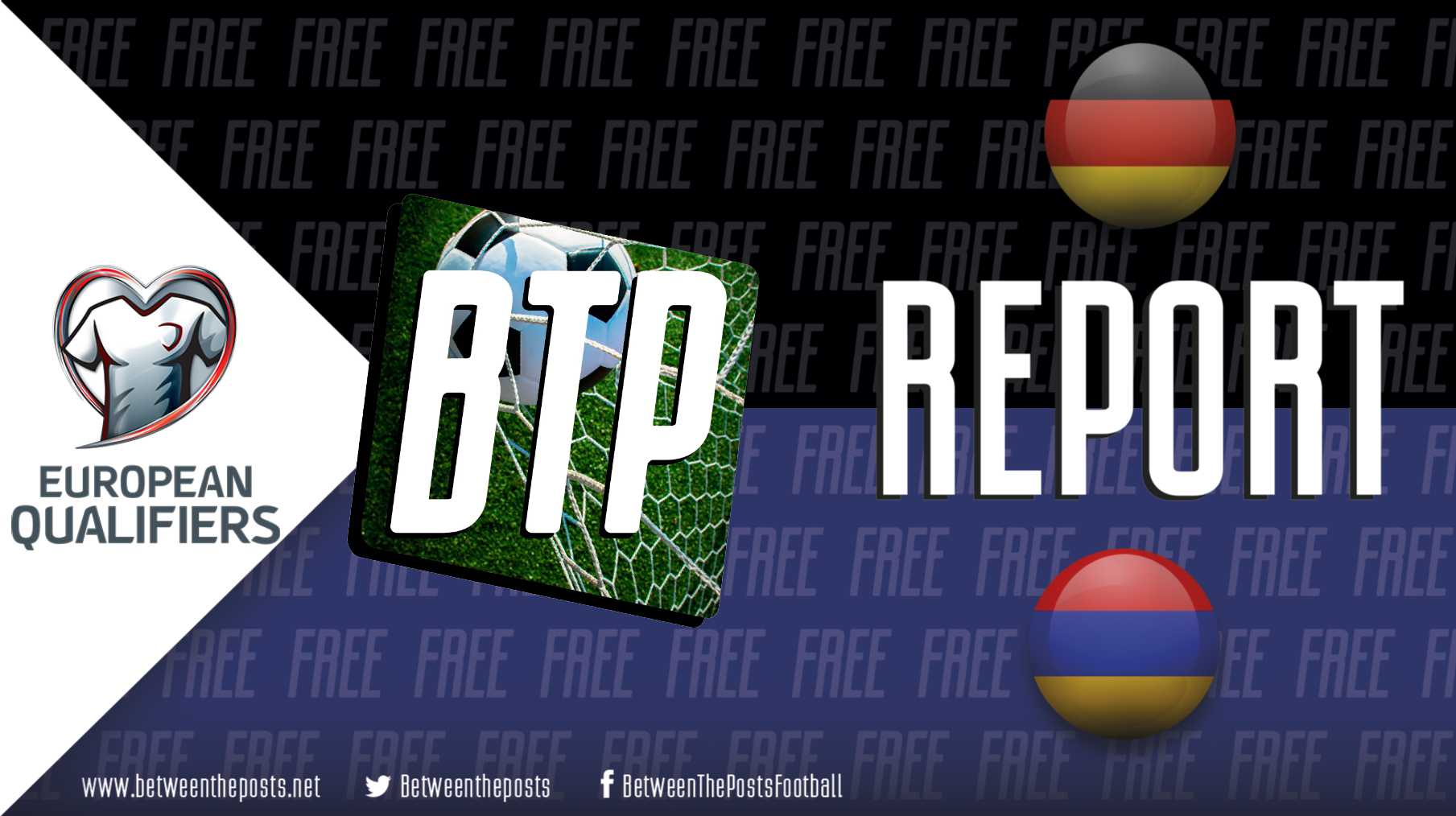