Athletico Paranaense dominated the early portions of the game with high pressing and direct attacking from the wings. However, unable to maintain their intensity Paranaense’s game dropped off, leaving space for Santos to find holes in their defense. From this point on, both sides evened themselves out and Paranaense escaped 1-0 winners.

The match left Santos with little to play for, as the second placed side had already comfortably qualified for the 2020 Copa Libertadores. Conversely,  for Athletico Paranaense the final two matches of the season could be the difference between a gruelling Copa Libertadores qualifying campaign, or direct entry into the continent’s premier tournament, as they battle with Grêmio for Brazil’s fourth a final automatic place.

Athletico Paranaense have been through a somewhat chaotic season. After a poor start, they recovered to win the Brazilian cup and have fought their way to Copa Libertadores qualification. Their last loss dates back to the middle of October, making it an eleven-game unbeaten run. Yet surprisingly, their manager, Tiago Nunes, resigned at the beginning of November. Nevertheless, the team has soldiered on, winning five of their seven matches under new manager Eduardo Barros, who has stuck with his predecessor’s 4-2-3-1 formation.

On the other side, Santos have enjoyed a fine season under Jorge Sampaoli. They have been in the title race for some time, but in the end could not hold up to Flamengo’s quality. However, winning six of their last eight matches, they are still in good shape. After their win on the weekend against Chapecoense, Sampaoli made a few changes to his personnel as well as his formation – switching from a  3-4-3 shape to a 4-3-3 formation.

In Paranaense’s buildup, the wingers Rony and Marcelo Cirino moved inside to open the wings for the fullbacks. Especially the right back, Jonathan, who took a very high position on the right wing from where he made constant runs behind Santos’ backline. His counterpart on the left side, Márcio Azevedo, remained deeper – rarely advancing. With their focus on the right side, Eduardo Barros’ team looked for quick combinations through the wing. They did well to progress play into the attacking third, but lacked the accuracy in their final ball.

Another reason for their dominance was their high pressing. They attacked Santos even in their own box, trying to force them to play long balls. They used a 4-2-4 formation where Rony and Cirino moved up to mark the fullbacks. In the center, one of Camacho and Wellington moved up as well to mark Alison. This resulted in a shorthanded situation for the other defensive midfielder against the two higher central midfielders of Santos’ 4-3-3 shape, but because the intensity of the strikers forced Santos into playing long balls this was not an issues for Barros’ side early on. 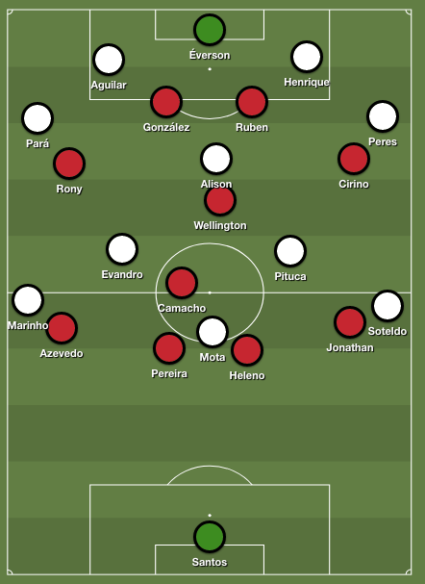 After roughly fifteen minutes, the intensity of Paranaense’s press decreased and Santos were able to build from the back. The fullbacks moved up a bit to create space for Felipe Aguilar and Gustavo Henrique. Because the goalkeeper, Éverson and the center-backs had more space, the distances for the strikers increased. With more time on the ball, the players were now able to look for the free man in midfield. If either Evandro or Diego Pituca was able to receive the ball, they looked for wingers Marinho and Yeferson Soteldo. Both players looked to take on their opponent’s and were able to progress the ball into the attacking third. These actions resulted in several promising s attacks, but genuine chances were rare.

In addition to their buildup, Santos also improved their medium block. Out of their 4-5-1 formation, the wingers kept an eye on the advancing fullbacks and tracked their runs, leading to a 6-3-1 formation. The central midfielders did a good job of preventing their opposition from turning after they received the ball, despite being in a four against five scenario.

In Paranaense’s buildup, number ten Lucho González dropped back into the hole on the right side which had been abandoned by his fullback. Here he was able to create the numerical superiority necessary in the buildup. The midfielders moved a lot, but failed to take the correct positions. The most promising attacks came through the right side, but Paranaense also used a lot of chipped passes that were easy for the Santos backline to anticipate and therefore did not cause any danger. 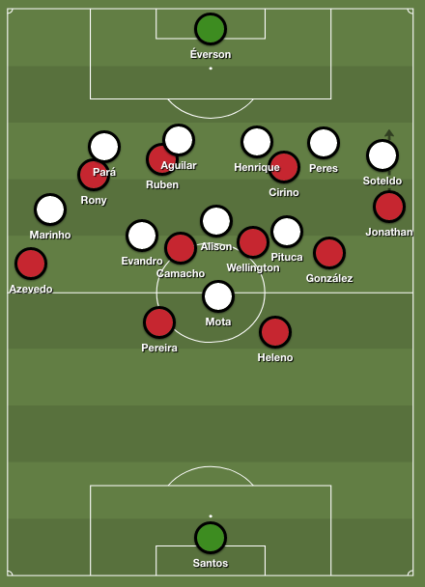 Paranaense had five against four superiority in buildup, but failed to profit.

After thirty minutes, both teams were at a point where they were able to keep the ball and have longer spells of possession, but could not create any chances. However, two minutes into the second half, Marco Ruben gave his side the lead. Wellington found Rony on the right side, where the winger was not put under pressure by left back, Luan Peres and left to cross the ball. In the box, Marco Ruben used a double movement to separate himself from his marker and scored via a flying header from roughly 12 yards out.

It did not occur in the buildup to the goal, but Santos changed their defensive formation at half-time. Left winger Soteldo did not play as a second left back anymore, but stayed next to striker Jean Mota in a 4-4-2 shape. It is unclear if it resulted from the early  goal or an instruction at half-time, but Santos also endeavoured to press higher. In their high block, they closed the center with the two strikers and guided Paranaense’s buildup to the wings – forcing their opponents to play long balls. As a result, Paranaense had fewer possession spells in the opponent’s half.

Like Santos, Paranaense restarted with their high pressing, but were not as effective as they were in the early portion of the match. If their intensity was high, they still managed to force Santos to play long balls, but the overall intensity decreased and therefore Santos were able to exploit the holes in their formation and advance forward. Because of this, Paranaense had to use a medium block more often than in the first half.

Paranaense generally stayed very compact in the medium block, declining passes into the center through the positioning of the strikers. Nevertheless, Santos applied good positional play as well. They were able to find the spaces in their opponent’s midfield chain – either through the positioning of the central midfielders in the halfspaces or through striker Mota dropping back in the center. Afterwards, the ball was switched to a wing, mainly the left, where Soteldo was able to beat his opponent regularly. Unfortunately for Santos, they could not create dangerous chances.

Despite falling behind, Santos looked slightly better than Paranaense in the second half. However, Luan Peres received his second yellow card after 68 minutes. Santos still stayed in control of the match, using a 4-4-1 formation where they played a lot of balls on the left wing to Soteldo who then was asked to create chances through his dribbles. But if creating chances with eleven players was an issue, it does not become easier with ten players – Santos only had two shots in the entire second half, none after Peres’ dismissal.

Paranaense did not play well after the red card, losing the ball too early after recovering it. Their longest spells of  possession came after the 80th minute, in which they were able to slow play and see out the match.

Both teams were not at their very best, but showed why they sit near the top of the Série A table. Athletico Paranaense impressed in the beginning with their high pressing, but Santos exploited the holes once the intensity decreased. In their own possession, Paranaense were too predictable, relying too much on the passes behind the opposition’s backline.

After some problems in the first minutes, Santos calmed the game down with a compact 4-5-1 medium block. A medium block refers to a team that retreats in their own half out of possession, generally only disrupting their opponents some way into their own half. The 4-4-2 shape they used in the second half was more aggressive and forced Paranaense to play long balls. In possession, they used a typical 4-3-3 formation and tried to play out from the back. Their buildup was good, but the offense was the major issue in this match. 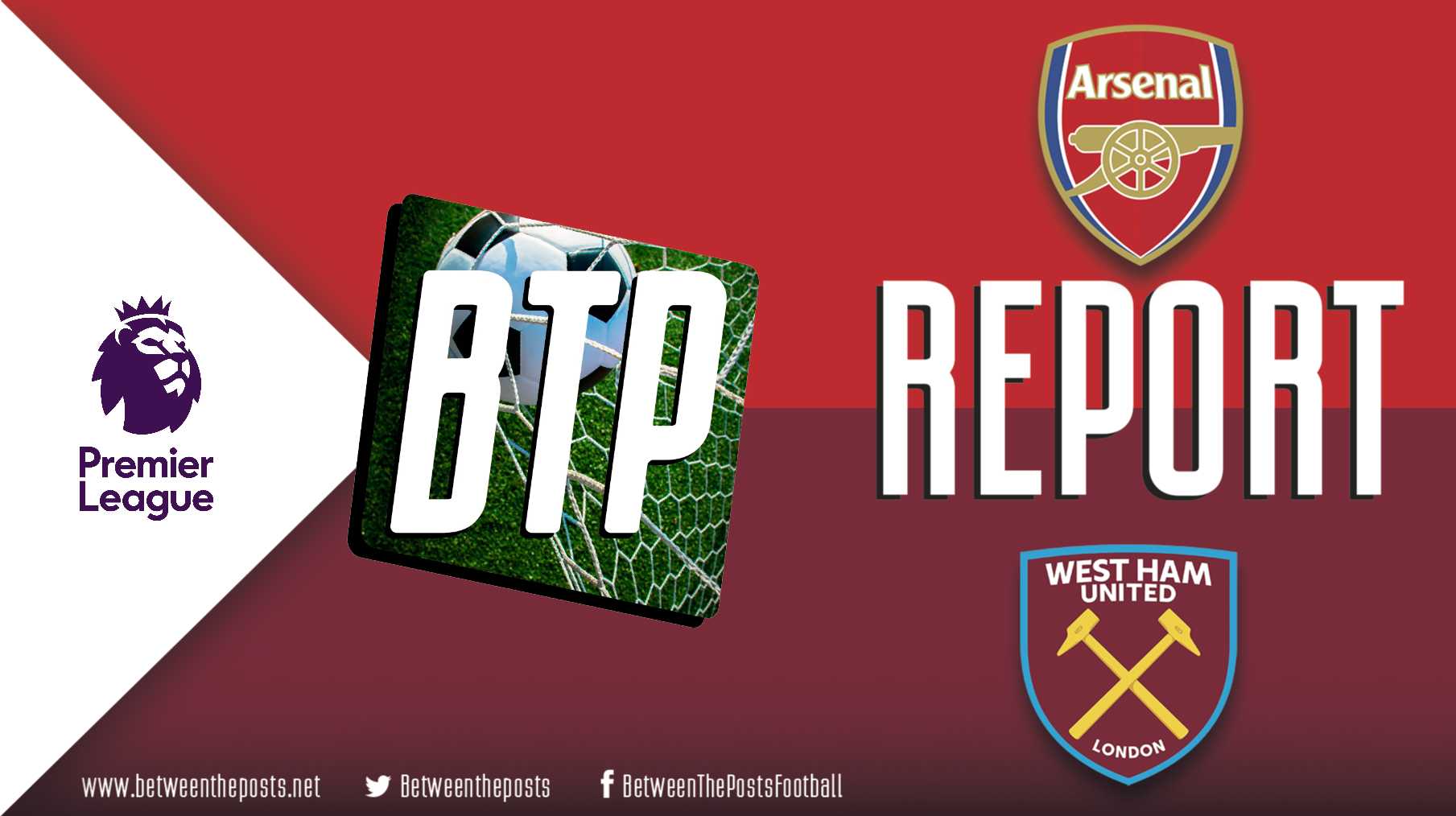 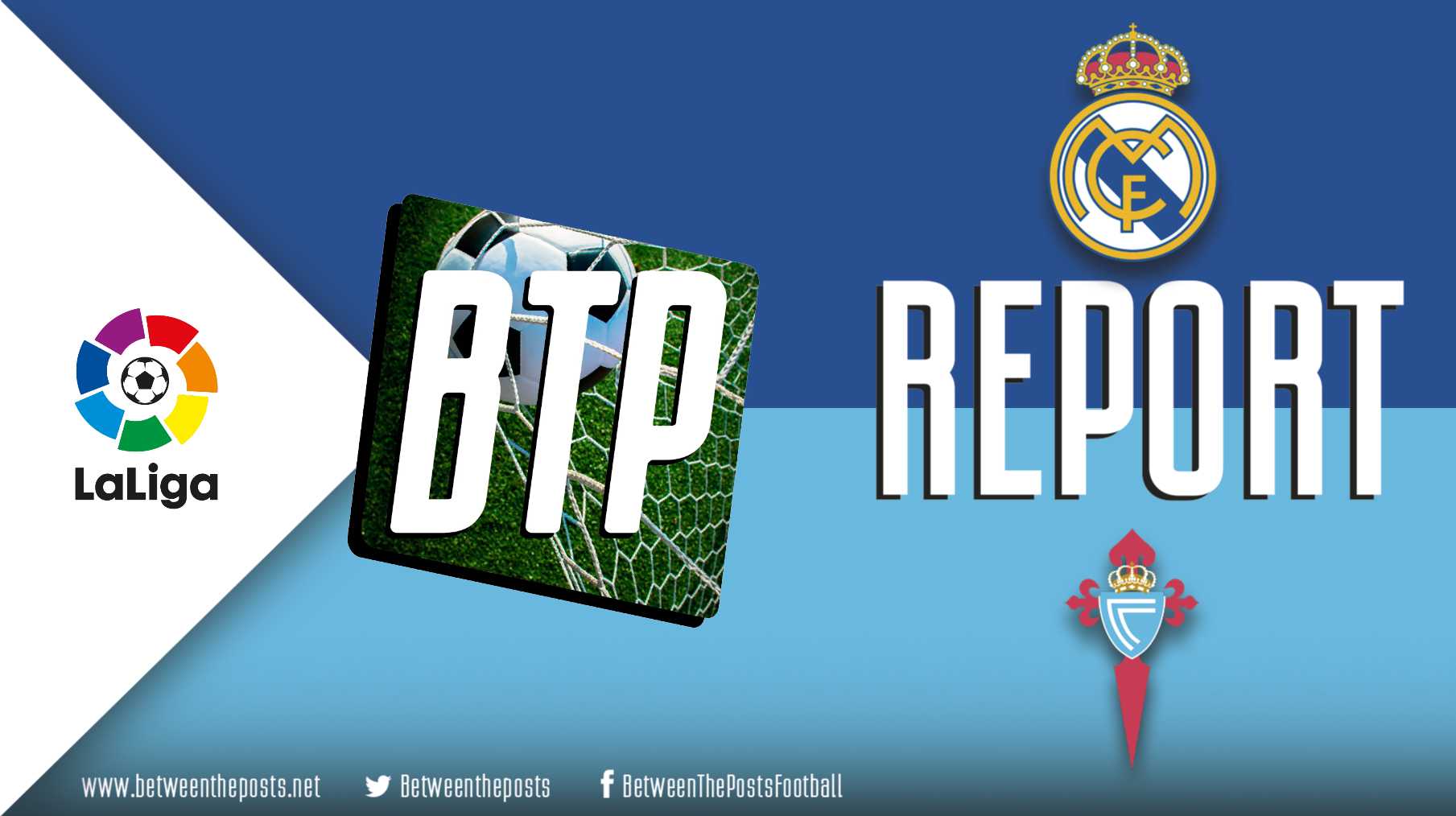