Saúl’s fourth minute goal set the scene for the rest of the game as it allowed Atlético Madrid to do what they do best – defend in a low block. Liverpool were unable to find the solution to crack Atlético’s compact 4-4-2 shape as the home side cleared almost everything that came into their penalty box. The pattern in the second half was largely unchanged as Jürgen Klopp’s changes were unable to meaningfully affect the game.

The draw for the Champions League Round of Sixteen produced a tie between two of Europe’s strongest defensive units in the shape of Atlético Madrid and Liverpool, with the teams having conceded just seventeen and fifteen goals respectively in their domestic leagues.

Liverpool sit top of the Premier League as they stay on course for a record-breaking season. They were also able to finish top of their Champions League group despite struggles home and away against Napoli as well as the interesting problems posed to them by Red Bull Salzburg.

Atlético meanwhile find themselves fourth in LaLiga, and have struggled in front of goal despite producing good underlying numbers, perhaps missing the clinical edge provided by the likes of Antoine Griezmann in recent years. They finished second in their group as they were only able to produce a draw and a narrow defeat against eventual group winners Juventus.

Atlético lined up in their usual 4-4-2 system, although Diego Simeone was without the services of Kieran Trippier, Héctor Herrera and João Félix due to injury. Meanwhile Álvaro Morata was able to make the starting eleven and Diego Costa made the bench after both strikers had been injury doubts coming into the game.

Jürgen Klopp on the other hand was able to call on his full strength starting eleven. He made two changes from the weekend’s victory away at Norwich, as Fabinho and Sadio Mané replaced Naby Keïta and Alex Oxlade-Chamberlain in Liverpool’s 4-3-3 system. 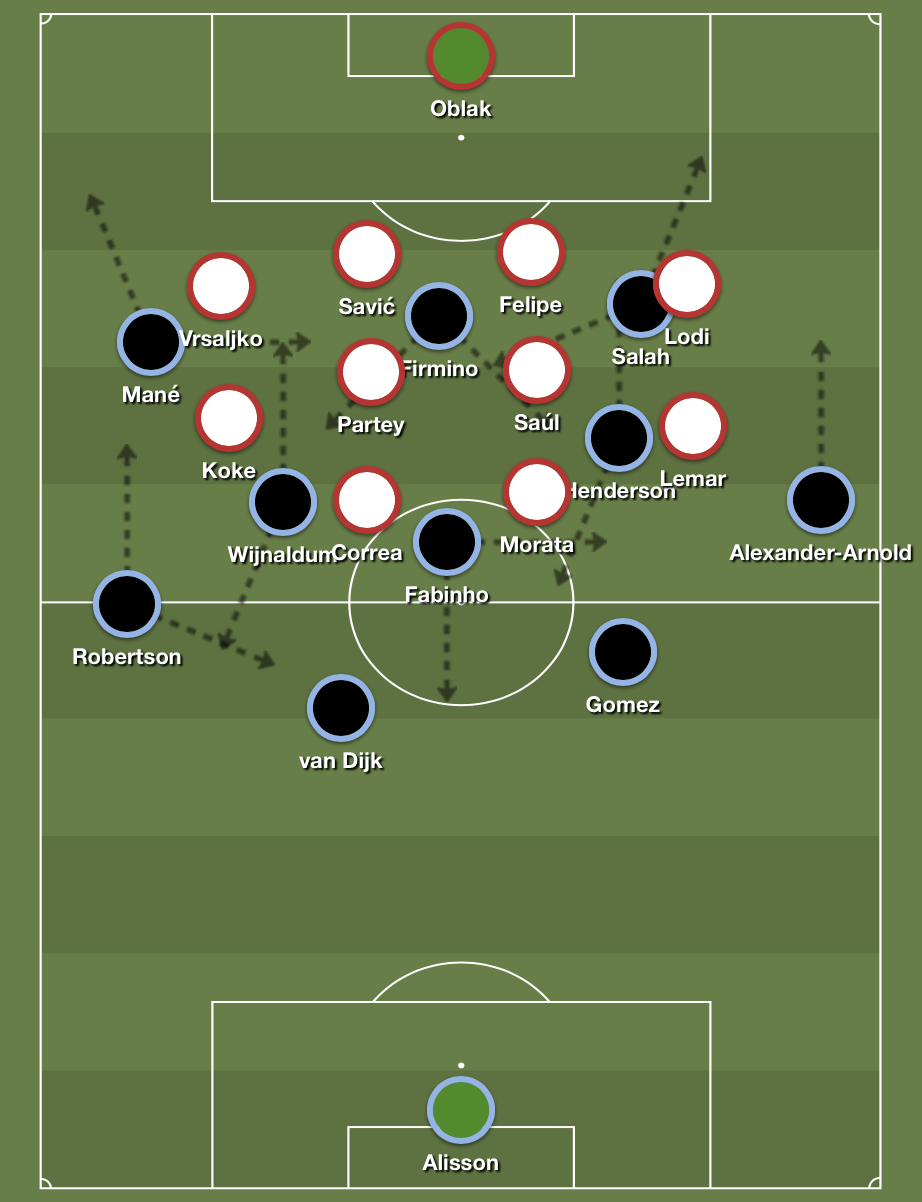 Atlético sit back after early goal

Atlético started the game strongly, and were able to force a corner kick after putting the pressure on Liverpool’s defense in the first couple of minutes. From this corner, Fabinho inadvertently deflected the ball into the path of Saúl inside the six yard box for a tap-in to put Atlético 1-0 up.

From this point, the game took a rather predictable course. With the lead, Atlético proceeded to do what they are most comfortable doing which is defending in a low block, A low block refers to a team that retreats deep in their own half out of possession, generally only disrupting their opponents around their own box. and Liverpool were faced with the unenviable task of breaking them down.

Klopp’s side attacked in their customary 4-3-3 shape. Their attacking scheme was slightly asymmetric in the sense that the players on the right side of the formation tended to push forward from their starting positions more aggressively than those on the left.

Trent Alexander-Arnold provided most of the width on the right hand side, and Jordan Henderson also pushed forward in the right halfspace If you divide the field in five vertical lanes, the halfspaces are the lanes that are not on the wing and not in the center. Because there is no touchline like on the wing, players have the freedom to go everywhere. But this zone often is not as well-defended as the very center. This makes it a very valuable offensive zone to play in and a lot of chances are created by passes or dribbles from the halfspace. relatively often. Georginio Wijnaldum and Andrew Robertson on the other side still had freedom to move forward when appropriate, but tended to start somewhat deeper.

Liverpool often formed a diamond in their buildup between the center-backs and two midfielders. For example, Wijnaldum could drop off to the left side of Virgil van Dijk, with Fabinho remaining in the six position and Joe Gomez to the right of Van Dijk. 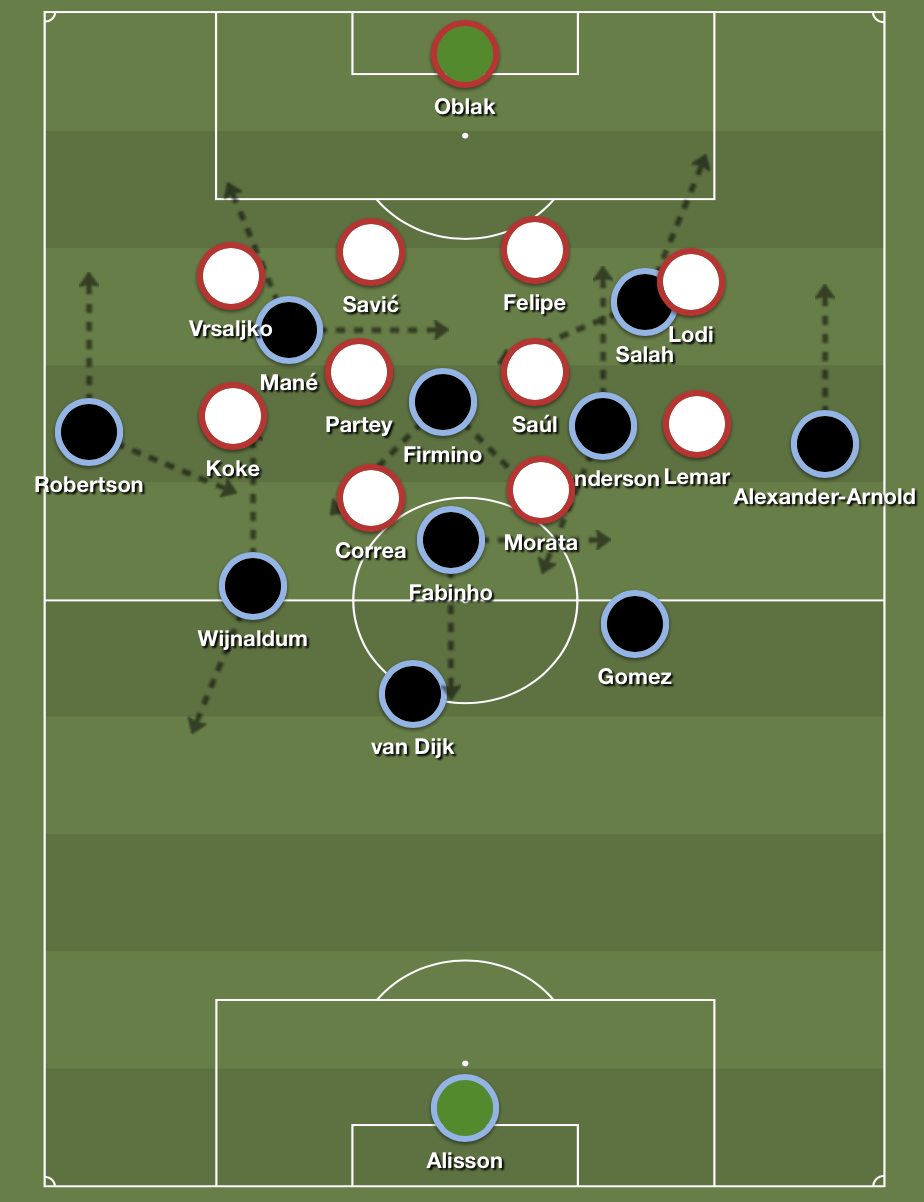 This afforded Liverpool a stable platform to launch attacks from, and the Atlético strikers would rarely push out to pressure the first Liverpool line anyway, since they preferred to stay closer to their midfield to offer protection in the center of the pitch, which was already well defended thanks to the strong organization of the midfield unit.

Liverpool as always tried to use switches of play A pass from one side to the other. to destabilize the Atlético defensive scheme, which did leave some space on the ball-far side at times due to the compact nature of their 4-4-2 defensive shape.

These switches were generally dealt with competently by Atlético. The fullback or nearest midfielder was usually very quick to move out to close down the Liverpool player receiving the switch of play. Furthermore, the follow-up movements were dealt with well.

For example, Liverpool would look to exploit the space behind Atlético’s fullbacks when they moved out to the wing to close down the likes of Alexander-Arnold. Liverpool players making runs into these spaces behind Atlético’s fullbacks were diligently tracked by Thomas Partey and Saúl, who both demonstrated great defensive instincts throughout the game as well as being efficient with the ball on the rare occasions where Atlético found themselves with possession.

Atlético’s penalty box defending when Liverpool attacked the box with crosses or more intricate moves from the wings was also very strong. The wide midfielders did well to double up in the wide areas to prevent the fullbacks being isolated one-versus-one.

The central midfielders, aside from covering the wide spaces as already described, also took up good positions in the penalty box in order to block the areas where Liverpool might look to deliver cutbacks to, leaving the center-backs to focus on defending the goalmouth. 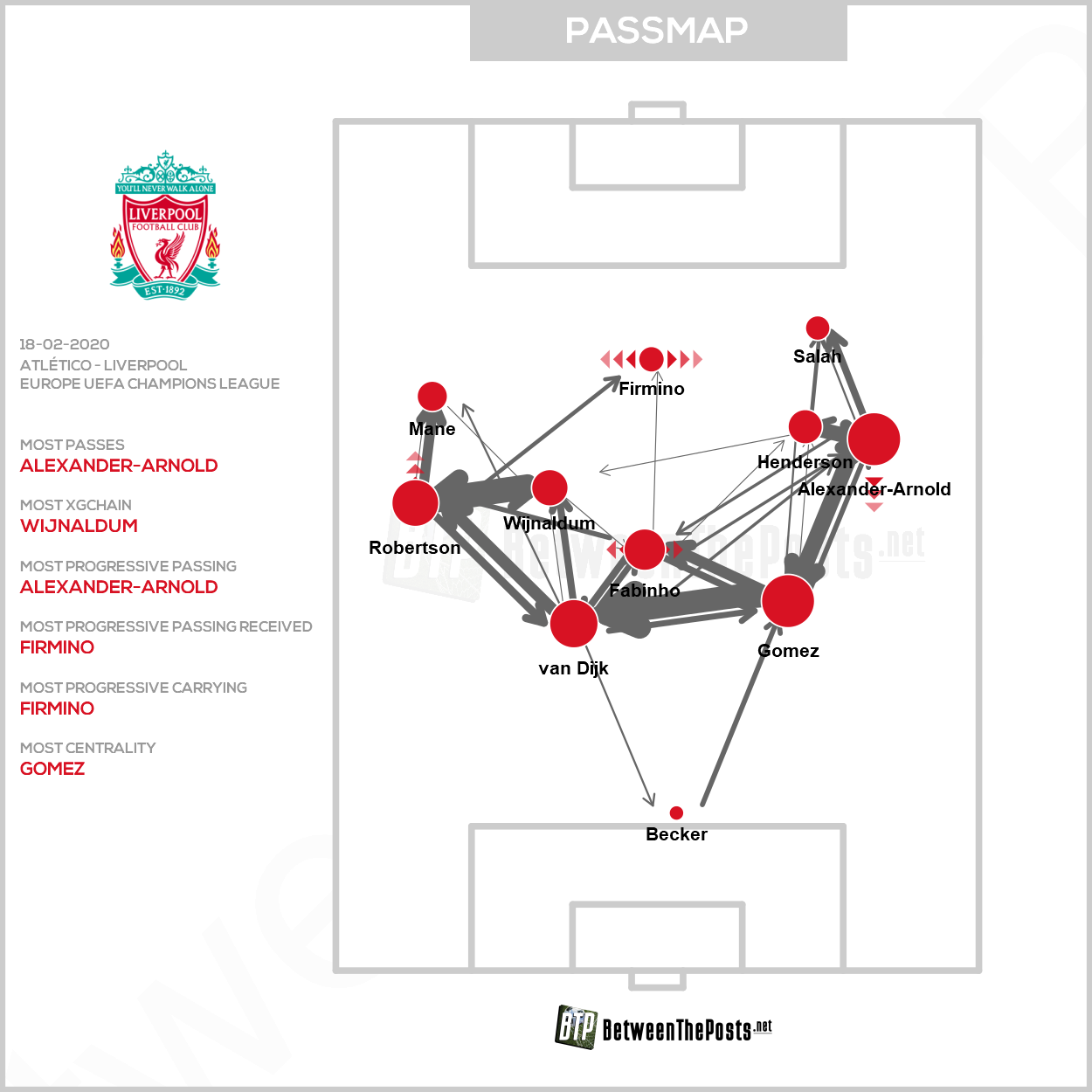 The first half passed without Liverpool landing a shot on target, and the second half would end up being a similar story. Atlético continued to defend in their compact 4-4-2 shape and Liverpool continued to lack the answers to break down the organized defensive unit in front of them.

In terms of attacking threat, Atlético were largely relying on direct passes into the strikers and winning the resulting second balls to attack the Liverpool backline. They looked to bring the fullbacks into play wherever possible, and Renan Lodi in particular was a threat going forward with some energetic dribbling and a couple of good quality crosses into the box.

Both coaches made changes at half-time, which were presumably due to injury. Thomas Lemar was replaced in the Atlético midfield by Marcos Llorente who took up the right midfield position with Koke moving to the left.

Meanwhile for Liverpool, Mané was replaced by Divock Origi, who ended up having a difficult time on the left wing for Liverpool. Klopp’s next change later in the half was somewhat surprising, as he removed Mohamed Salah to bring on Oxlade-Chamberlain. His final change after this was to replace an injured Jordan Henderson with James Milner.

Simeone meanwhile switched out both strikers. Vitolo replaced Morata who picked up a knock, and later Diego Costa made an entry to replace Ángel Correa, who was looking increasingly tired as the game wore on.

Overall, the second half continued in much the same pattern as the first, and Liverpool’s inability to get any change out of Atlético’s organized defense meant the game ended 1-0 to Atlético. 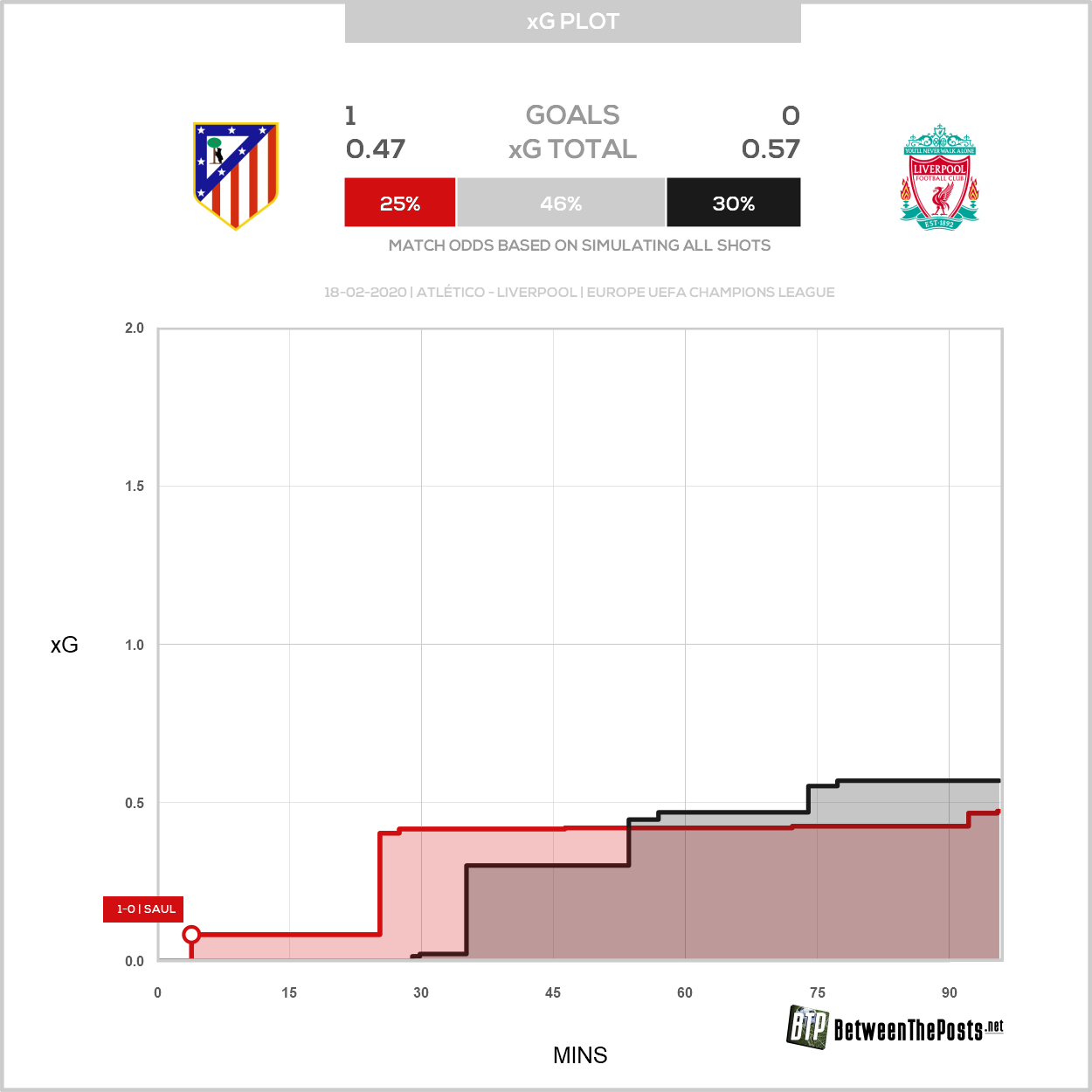 Atlético do not tend to concede goals at home in Champions League knockout ties, so Liverpool are far from the first team to struggle here and probably will not be the last. A possible area for criticism might be Klopp’s choice of substitutions, as potentially creative players such as Naby Keïta and Takumi Minamino were left on the bench when Liverpool seemed to be in need of players with such skill sets. From Liverpool’s point of view the tie is far from over, and they will be rightly confident in their ability to turn this tie around at Anfield.

Diego Simeone and his team will of course be satisfied with a classic Atlético home performance. Their incredibly well-organized defensive scheme served them well as it has done many times in the past, but going another ninety minutes against Liverpool at Anfield without conceding seems a tall task even for this team. Nevertheless, Atlético’s win in this first-leg match was largely deserved.