A ruthless City left no room for doubt, taking the lead early and firmly controlling the remainder of the game. As the game progressed, City kept mutating in a successful attempt to lock Burnley under a hypnotizing spell that sliced their defense in two, helplessly capitulating them into endless doom.

After drawing against Newcastle United despite a dominant display, Manchester City trailed eleven points behind a relentless Liverpool side that had dropped only two points in fourteen matches.

Klopp’s side is looking well on track to follow in the footsteps City left behind during their historic 2017/18 season, whereas conversely, as Guardiola’s men proceeded towards a third consecutive Premier League success, they encountered numerous obstacles that have prevented a clean title defense.

Therefore, after losing to Liverpool and dropping two further points in the following weeks, the game away at Burnley gained vital importance for City in an attempt to keep their title rivals on the radar. In the process, reclaiming a second-place spot that has been deservedly stripped by Leicester City formed the first step.

City started in a 4-3-3 formation that featured Fernandinho and Nicolás Otamendi in the center of defense with Angeliño and Kyle Walker at their sides. Ahead of the backline, in the six position, started Rodrigo, while Bernardo Silva replaced Riyad Mahrez on the right wing.

Burnley used a 4-4-2 shape with James Tarkowski and Ben Mee in central defense and Chris Wood leading the line.

Given previous meetings and the heavily contrasting principles between managers Sean Dyche and Pep Guardiola, the plot of the game could be easily anticipated. What remained to be seen was the script, as in the tactics City’s manager selected for a cold Tuesday night in December.

As City built the play, Burnley disturbed their construction by applying a slight pressure merely intended to slow down the opposition’s way up the field. From a 4-4-2 defensive shape, Jeff Hendrick marked Rodri; the two center-backs were given freedom to build up, which allowed City to access the wingers or central midfielders in the halfspaces If you divide the field in five vertical lanes, the halfspaces are the lanes that are not on the wing and not in the center. Because there is no touchline like on the wing, players have the freedom to go everywhere. But this zone often is not as well-defended as the very center. This makes it a very valuable offensive zone to play in and a lot of chances are created by passes or dribbles from the halfspace. easily. Angeliño would push up to pin the fullback while Raheem Sterling drifted into the halfspace. Meanwhile, on the right, Walker stayed tight, almost as a makeshift half-back, while Bernardo Silva provided width on the touchline. 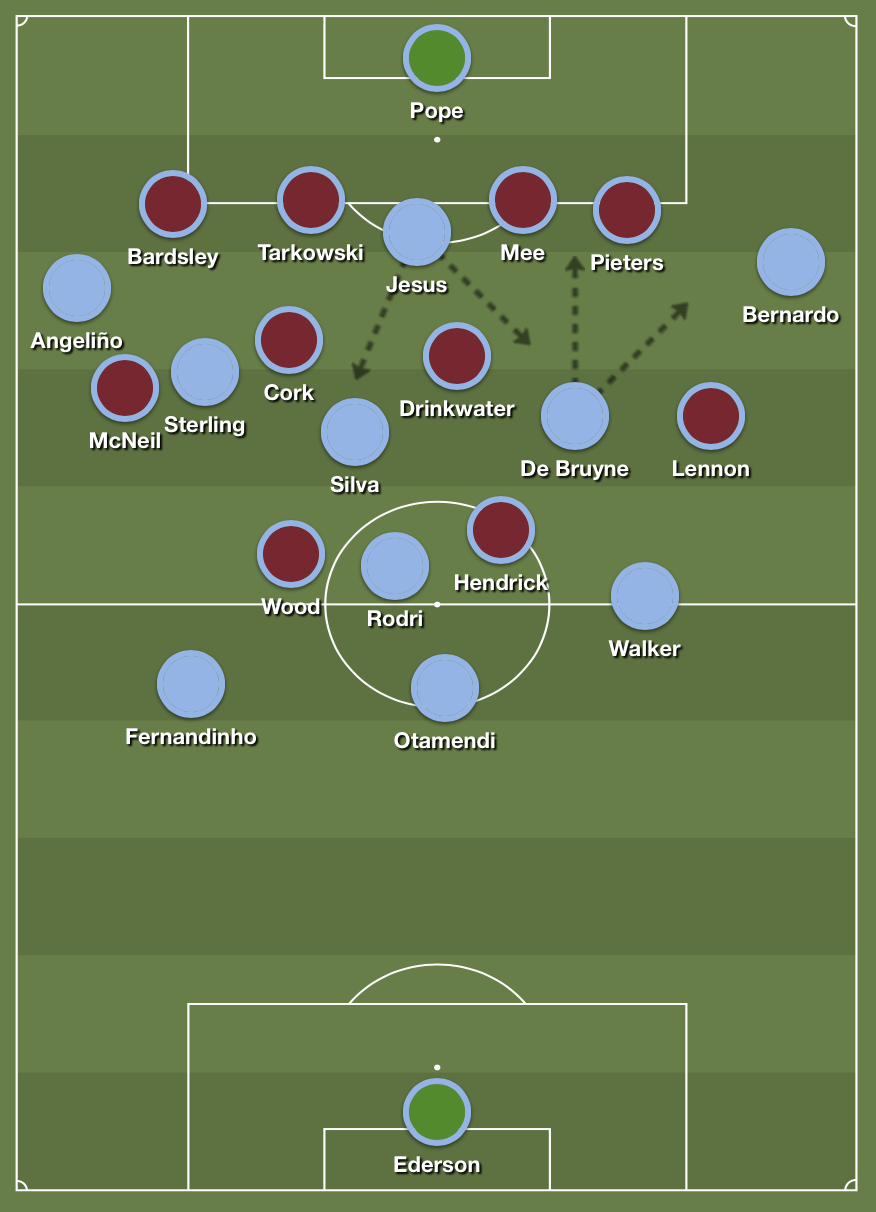 City’s shape on the ball against Burnley’s 4-4-2 low block. A low block refers to a team that retreats deep in their own half out of possession, generally only disrupting their opponents around their own box.

Once City progressed the ball, Burnley would defend in a 4-4-1-1 shape which left Wood up front to hold up the play in the occurrence of a counter. Although Sean Dyche’s intentions expected the striker to lay-off direct balls during counters, City dealt with this scenario very efficiently, anticipating passes and blocking the counters.

Despite the premises and the chips placed on City’s dominance, Burnley held their own during the first twenty minutes. Although the possession phases did not lead to much given the excessive directness and lack of elaborate patterns of play, the midfield line’s aggressiveness ensured the play was directed wide.

Consequently, City adjusted their initial approach by avoiding passes into congested areas for combinational play, preferring to repeatedly switch the play to the isolated winger instead.

By occupying different corridors on the same side of the half City could easily achieve space on the ball-far side, usually the right flank. In the thirty-second minute, City demonstrated the importance of supporting runs on different vertical lines when Rodri received the ball inside the midfield circle to glide through the opposition’s two attackers and lay the ball off to De Bruyne. The Belgian passed it to the wide Bernardo, who completed a one-two combination with the midfielder, now free in the halfspace. From the side of the box, De Bruyne then whipped one of his violent low crosses into the on-running Sterling and Jesus, whose shot was miraculously saved by Pope from close range.

Previously though, City had already taken the lead when in the twenty-third minute Kevin de Bruyne carried the ball up the field against an unbalanced Burnley defense. After initially losing the ball to a tackle, David Silva collected the loose ball and passed it to Sterling, who assisted Gabriel Jesus on the left corner of the penalty area. Seconds later, an inch-perfect curled effort from the Brazilian neatly rested in the back of the net.

Ultimately, Burnley’s few surges forward left the defense exposed against City’s counters due to the center-backs’ and midfielders’ involvement in runs into the box. However, when Hendrick was dropped into midfield in a positional exchange with Jack Cork, Rodri – and thus City as a whole – started finding more time and space to receive and control possession. 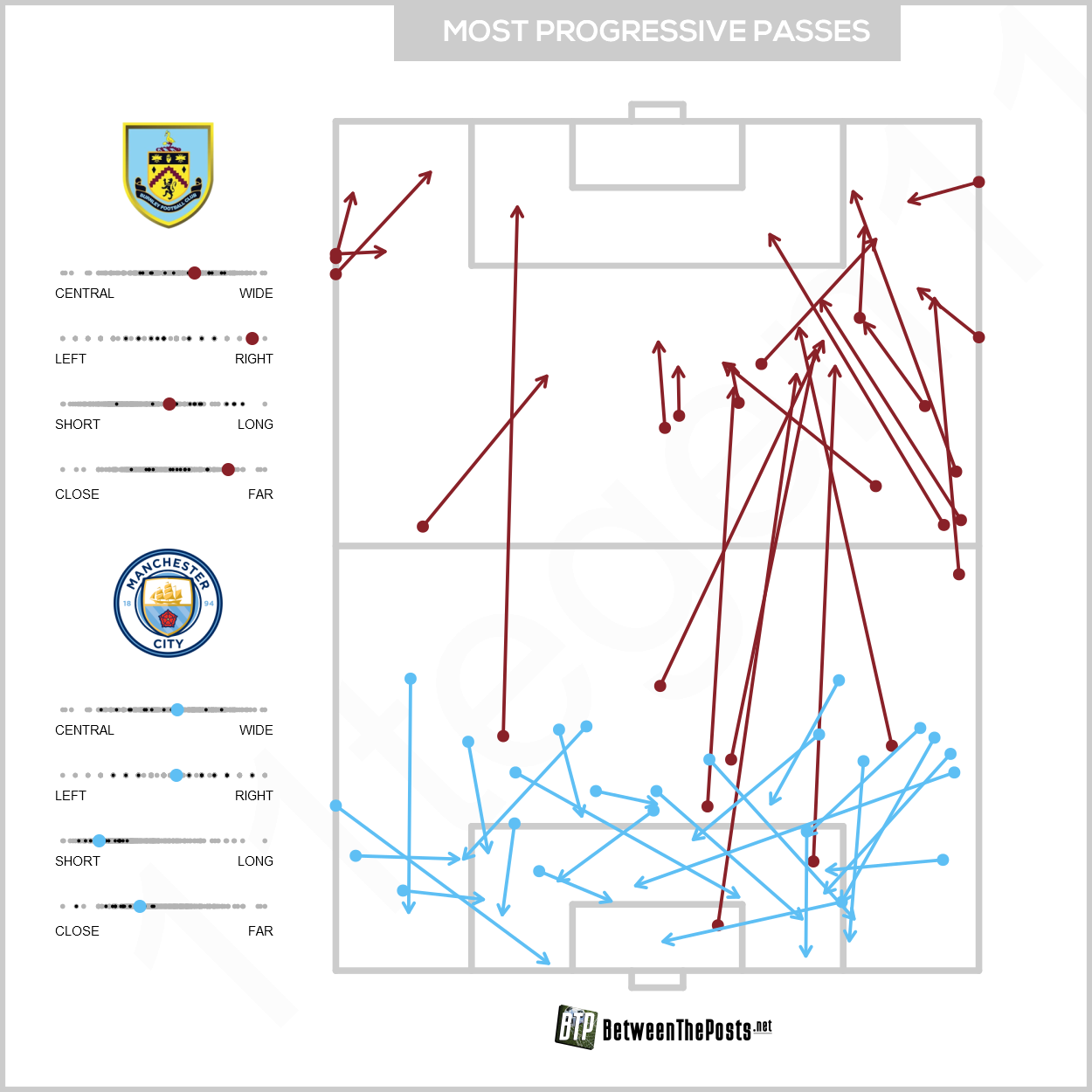 Quite the contrast in progressive passing style.

Immediately after stepping on the field for the second half, Jesus completed his brace in the forty-eighth minute after Silva crossed an inswinger onto the center-forward’s volley. The shot beautifully slotted into the top corner, giving City a safe advantage for the remainder of the match.

The goal safeguarded City’s game plan, meaning that the visitors could now calmly circulate the ball around without pressure, and look for a breakthrough at the right moment. As a result, De Bruyne and David Silva started dropping deep more often to collect the ball and secure the possession.

In doing so, Guardiola’s side was still rapid to recognize the chances to progress the ball vertically after having drawn the midfield line out of position. First, they circulated the ball from side to side, and as the eights dropped, the Burnley midfielders followed, opening space between the lines for Sterling to occupy. 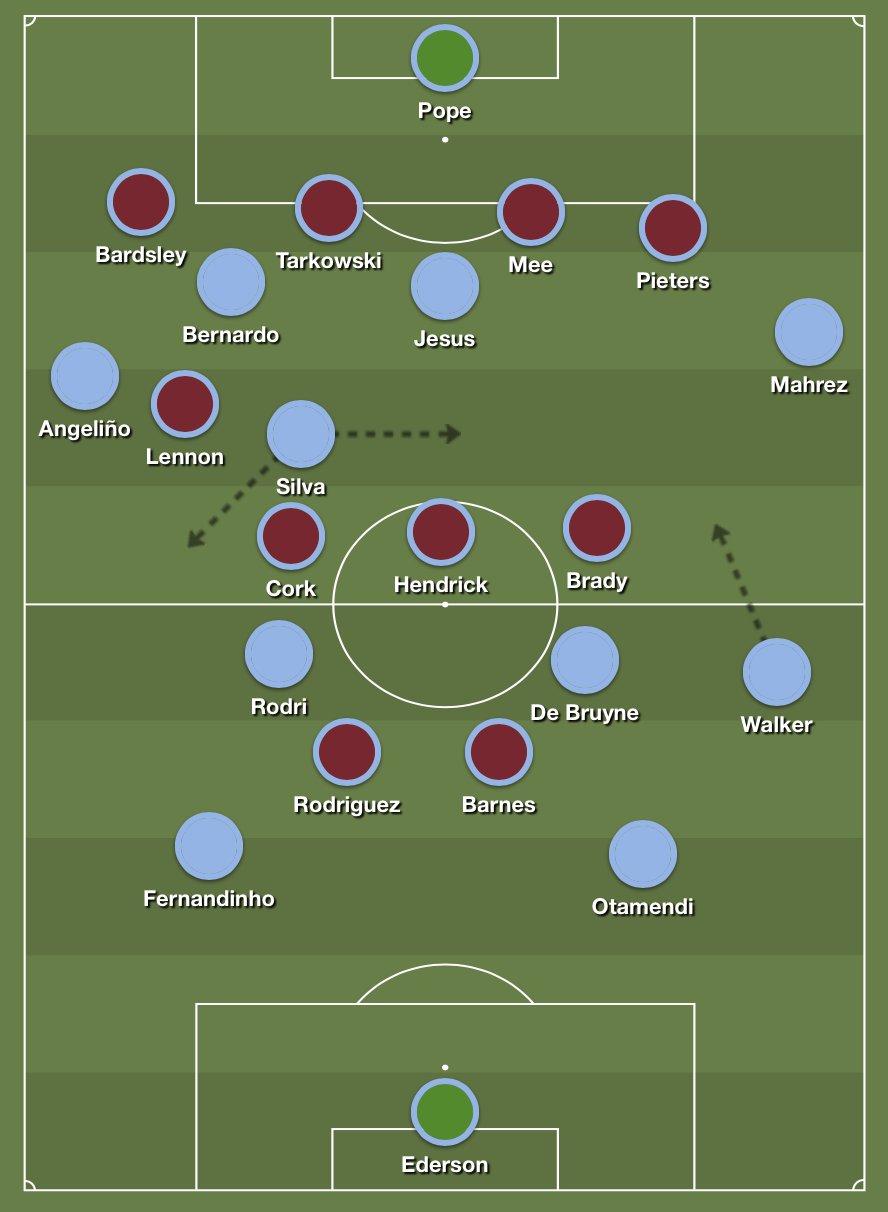 City’s buildup shape as the game progressed guaranteed support around the ball with and without possession.

In the 68th minute, a rocket was launched from Rodri’s foot into the back of Pope’s goal, putting an end to a game that never really saw Burnley threaten the English champions in charge.

With the game done and dusted, City continued dominating possession and increasingly stretched the opposition’s lines until, in the 86th minute, they finally capitalized by exploiting the space between midfield and defense. Bernardo picked up a second ball after Jesus headed it down, and assisted the substitute Mahrez for a goal from the edge of the box.

Just when Guardiola thought his team had achieved a well deserved clean sheet, though, Burnley scored a consolation goal, closing the curtains on a diligent show conducted by City.

Not bad for a Tuesday night 😄

Burnley never posed a threat to City, falling in their traps and failing to make any sort of impact in the final third. The one-third of the pitch that is closest to the opposition’s goal. However, given some of City’s recent stumbles, the home side’s chaotic nature had to be dealt with carefully, something Guardiola’s men demonstrated in their meticulously selected passes, as they wait for Liverpool to finally slip after their many last gasp exploits.