Antonio Conte is back in the Premier League, with a more difficult challenge bestowed upon him. In a rough game of football, Tottenham Hotspur showed signs of how they will look under their new boss, against an Everton team who looked to reinforce defensive stability.

A week in football is a very long time. One would be precarious to bin a new manager, especially the carousel that Tottenham Hotspur endured just a few months ago. A week later, one of football’s most prominent figures took to the dugout.

Antonio Conte has been the name on everyone’s lips. A world-class coach, renowned for short term signings, lifting trophies and watching his creation blow up, which one will Tottenham miss out on? Nevertheless, Spurs already showed some level of improvement, against Vitesse Arnhem, in midweek. Wide pinning for inside forwards to have space, a striker that combines and moves into areas for runs in behind, it’s easy to see how Conte will make it work with this Tottenham team in place.

His first challenge was to bypass an Everton team in turmoil. A good performance at Old Trafford was followed by three defeats on the spin and having looked as loose defensively as they have been over the past few years. Injuries to crucial figures such as Dominic Calvert-Lewin, Yerry Mina and Abdoulaye Doucouré have not helped, but this is no excuse for bad midfield pairings, lack of a game plan in possession and Everton being vulnerable to defending set-pieces again.

In the 4-4-1-1 formation, Rafa Benítez made three changes to the team that lost to Wolverhampton Wanderers on Monday night. Lucas Digne returned to left-back, which saw Ben Godfrey shift back to the center-back position and Mason Holgate drop to the bench. Fabian Delph started next to Allan, ahead of Jean-Philippe Gbamin whilst Anthony Gordon also returned, who came in for Alex Iwobi.

Conte has already reverted this Tottenham team to his trademark 3-4-3 structure, starting the same eleven that beat Vitesse in the Europa Conference League. This saw a midfield pairing of Oliver Skipp and Pierre-Emile Højbjerg, with Emerson Royal and Sergio Reguilón as wing-backs. Harry Kane spearheaded the team, with Lucas Moura and Heung-Min Son alongside.

Getting ideas to form

Tottenham enjoyed the bulk of the ball throughout the first half, trying to engage their wide center-backs with direct passes into the forwards, who occupied the halfspace. Moura and Son continuously moved in these areas, but Everton’s defensive approach had anticipated this happening.

Everton’s 4-4-1-1 organization had altered the positioning of its midfielders. Delph was the deepest, with Allan and Andros Townsend in the same line, whilst Demarai Gray started on the left and Gordon out on the right. Benítez’s team resembled a 4-1-4-1 shape at times, even a 4-3-2-1 medium block, as Allan and Townsend engaged with Tottenham’s double pivot.

With Allan and Townsend stepping up, this enabled Delph to scan behind them, with the Everton winger remaining deep and narrow, to squeeze space on Tottenham’s wide forwards. Without patterns being properly integrated and Everton’s block being effective down the middle, Spurs’ spells in possession were mostly unproductive. Tottenham did a lot of circulation between the 3-2, up to Royal or Reguilón, only for passes to go back towards the center-backs. 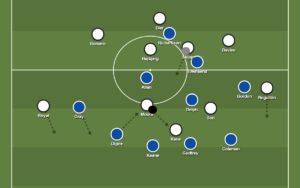 21st minute: Buildup to Royal chance. Overload inside, to isolate outside. Skipp passes through the lines (Grey ball, first pass), to Moura who is free in the center, due to Delph marking Son and Allan pushed forward. Moura’s wall pass to Kane (Black ball, second pass) funnelled play to Reguilón, who is free as Gordon doesn’t track his run.

However, Conte’s team did produce some moves, which caused Everton problems and opened them up down the flanks. This was mostly due to Delph being dealt with a two-versus-one overload and the vertical pass to far-sided forward being open. If connected, this forced Seamus Coleman or Lucas Digne into more central areas and Everton’s shape being bunched.

This produced one of the more recognisable changes so far for Conte’s Spurs to take place, high engagement from the wing-backs and pinning to stretch the last line. Gordon didn’t track Reguilón’s runs and this enabled the Spaniard to get into good positions down the channel. Both wing-backs had goalscoring attempts in the first half, the only two registered shots that weren’t blocked.

Early ideas were on show from Spurs, but the execution wasn’t. Everton protected spaces between the lines effectively and this stopped the opposition forwards from building deep connections. The two chances, for Royal and Reguilón, both came when Reguilón crossed to the back post and Harry Kane delivered a cross from the right.

Benítez’s team also had their fair share of possession, but unlike their opponents, there was no clear game plan in getting Everton into the penalty box. Everton couldn’t get into the transitional situations, that looked so accessible to them at the start of the season, with Tottenham getting into a 5-4-1 medium-to-low-block and forcing their opponents to circulate the ball.

Everton attempted to get the ball forward through long switches by Delph or Allan, mostly trying to find Gray to go one-versus-one with Emerson Royal in the Tottenham defense. Unfortunately, these forms of passes are high risk and have little success rate, especially with no forms of pulling Conte’s team forward and into vulnerable positions. 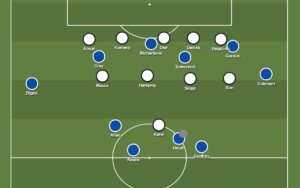 When forced to circulate the ball, Delph was Everton’s only form of connectivity. He often pumped the ball out towards Gray or into the feet of Coleman, with Townsend and Gordon ahead of him. Benítez’s team exchanged passes down the channels, but this was often in front of the Spurs midfield, with no routes or patterns to get the ball in behind.

As a result, the attack Everton offered was very ineffective. Players were forced to use individual traits to try and spark moves, rather than build a cohesive or rehearsed way of getting the ball into the box. With neither defensive block being pulled out of position, two attacks that lacked quality cancelled each other out.

Neither team can find a solution

Out of possession, Gordon dropped into a much deeper position than what he was, in comparison to the first half. This didn’t stop Reguilón from receiving the ball, but it did put him in a better defensive position and slow down Tottenham’s passing sequences.

Spurs continued to control the ball at the start of the second half and built some nice passages to move the ball through the lines. This came when Delph was forced to engage one side, with the far-sided midfielder still up on the Tottenham pivot. One phase, which dragged Ben Godfrey into the opposition half, drastically opened Everton up, as Kane connected with Royal and a three-versus-two was created with Moura down the right, Son having made a run in Godfrey’s space and Reguilón who was free at the back post, but Conte’s team failed to combine further up the field. 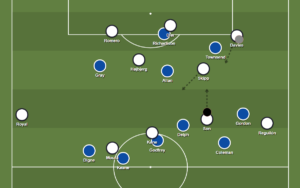 48th minute: Up-back-and-through combination to get the ball through the lines. Davies passed infield to Son (Grey ball, first pass), whose wall pass to Skipp (Black ball, second pass), opens the field for Skipp to progress. Kane is able to connect play with the opposite side and dragged Godfrey way out of position.

When Everton were higher up, Tottenham could move the ball through a lot more successfully. However, once Benítez’s team got back into a rest-defense, Spurs struggled to carve openings and were forced outwards, mostly towards the left, to get crosses into the penalty area.

After the hour mark, it was the hosts that were on the ball more, sparked by the game’s controversial decision to take the game’s headlines. Allan’s ball over the top saw Richarlison one-versus-one with Hugo Lloris, only for a challenge from the goalkeeper to see Everton rewarded with a penalty. After VAR review, this was ruled out, which sparked a beefier and scrappier game of football.

Such circumstances suited Everton, as they got into more situations with the ball, but suffered from the same structural issues that saw their attack limited. Allan’s long balls sparked the more dangerous moves, but Delph being substituted resulted in circulation being less accessible for them. Substitute Giovani Lo Celso hit the post from range, whilst Mason Holgate was sent off, ten minutes after coming on. Nevertheless, neither team adapted their attacks, which led to a stalemate.

A poor-quality game of football, but pieces from which both teams can take positive notes. If Everton are going to struggle to create, at least be difficult to beat and Benítez’s team returned to defensive stability here. What it will look like versus the big three, who they’ll face before Christmas, is another matter.

Tottenham still has a squad that is technically sound and adaptable in the attack. Implementing ideas takes time, but Conte can be encouraged by some of the passages of play here, even without a shot on target. If he can get this unit to click into place, Spurs are a team that can compete with anyone.