After a furious start, Lille failed to convert one of their big chances in the first fifteen minutes. It was Bordeaux that scored the only goal of the game in this period and managed to shut down their opponents’ offense afterwards. Lille’s manager Christophe Galtier did not try anything to improve their dysfunctional offense for 75 minutes.

Lille came into this game in second place of Ligue 1, winning four of the first six games. Last season, they finished 17th after a very chaotic season, firing legendary football professor Marcelo Bielsa in the process.

His successor, Christophe Galtier, who took over in December 2017, normally sets his team up in a 4-2-3-1 formation. The game at Bordeaux was no exception.

If Lille’s last season was chaotic, Bordeaux is well on their way of topping it. Manager Gus Poyet was already sacked after a press conference where he criticised the directors in all types of ways.

Bordeaux’s caretaker manager Éric Bedouet kept the 4-3-3 system that was installed by Poyet in place. One of the few positives for Bordeaux in this tumultuous period, is that they qualified for the Europa League, winning five out of six games in the qualifying rounds. They came into the game ranked 19th in Ligue 1.

The diagram below displays all twenty-two players. Lille’s positions and general movements are depicted, while Bordeaux can be seen defending in a 4-1-4-1. 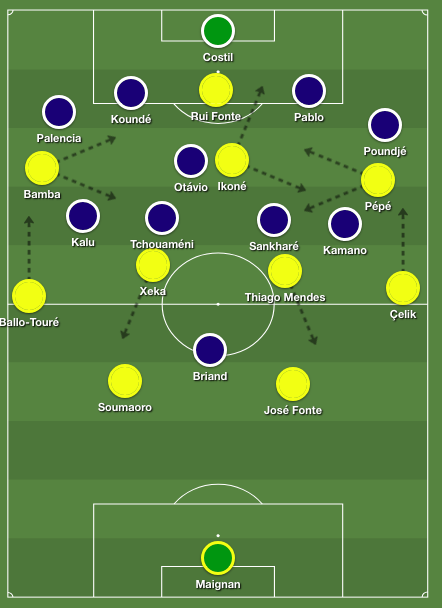 Lille’s frenetic start
In the first fifteen minutes, it was very clear to pick out which team ranked near the top of the table and which team at the bottom. Lille was vigorously attacking at full speed, and Bordeaux did not have any answers.

In Lille’s 4-2-3-1, the fullbacks push up high, the wingers drift inside and the two holding midfielders try to collect the ball early in the build-up. This is a very well known build-up pattern that can be seen across Europe every week.

It is worth noting that Lille do have some special attacking talent in the squad. There is 23-year-old Nicolas Pépé playing as a right winger. Already at four goals and four assists after six matches, he is rumoured to be on the shortlist of Europe’s biggest clubs. Playing just behind the striker is Jonathan Ikoné, another one to watch.

In the first, sixth and fourteenth minute, Lille racked up big chances. All nice and well, but with one problem… Lille did not convert said chances.

Bordeaux did get a goal in this period. From a rare counter-attack in the seventh minute. It was the first time the home side got into the opponent’s penalty area and they immediately struck. Bordeaux’s right winger Samuel Kalu dribbled almost the entire pitch and ended his formidable run with a low cross. A severe defensive lapse by Lille’s right-back Zeki Çelik – lack of awareness that his opponent was right behind him – resulted in a goal for François Kamano.

Bordeaux catches up to speed and defends early lead
One of the major defensive issues for Bordeaux in the opening phase of the match was the channel between their left central defender Pablo and left-back Maxime Poundjé, which was tested on various occasions.

After this was fixed – because Poundjé was playing more narrow and did not choose to follow his man all the time – the spaces were closed down more effectively by Bordeaux’s 4-1-4-1. Lille’s passing started to become more static and the offensive players were not found as much as before the fifteen-minute-mark.

Lille’s double pivot, consisting of Thiago Mendes and Xeka, played in very deep positions. They encountered the same problem all teams playing a 4-2-3-1 with two conservative holding midfielders do: there is not enough offensive firepower against a low block consisting of eight or nine players.

In the remainder of the first half, whenever Lille did manage to produce dangerous situations in the box, it resulted from early crosses by the fullbacks or after ridiculously skilled individual dribbles by Pépé and Ikoné.

After scoring the opener, Bordeaux could not really muster any more offense. Whenever they did get on the opposing half, it was due to solid link-up play with Jimmy Briand. The veteran had a quiet game in terms of offensive contribution in the penalty area, but the way he held the ball with him was very valuable at times.

Second half only sees positional changes
When one side of a football team is not clicking – the offense, in this case – a manager can influence this through positional changes, different moving patterns or a change of personnel. Lille’s manager Galtier only did the latter. Taking his striker off for a striker, his left winger for a left winger and finally his holding midfielder for a holding midfielder.

Not every coach is a Guardiola- or Tuchel- type that can turn a game around by changing his team’s setup. But standing at the byline for 90 minutes without changing anything fundamentally, while your team has glaring problems that occur time and time again just feels plain wrong.

For all of their offensive worries, Lille do deserve a compliment for their excellent counterpressing. When a ball was lost, multiple attackers immediately tried to put pressure on the ball. Even though Xeka and Mendes’ positioning might have cost Lille when it came to offense, being behind the ball enabled the rest of the team to press the ball immediately. Still, some Bielsismo remains in this Lille squad.

The match wore on and could have turned into a dull affair, were it not for the occasional individual skill performed by a Lille player. Bordeaux kept frustrating their opponents with their compact 4-1-4-1, that turned to 4-5-1 at times, and the second half did not see any big chances.

Bordeaux’ holding midfielder Otávio in particular did a good job, stifling many attacks and winning tackles. The last big chance for Lille came in the 84th minute after a rare deep turnover by Bordeaux, but Pépé could not convert. Another standout performer was goalkeeper Benoît Costil, who kept out every shot Lille managed to put on goal with no little skill.

After a late red card for Lille’s captain Adama Soumaoro – who played outstanding, but also got two well-deserved yellow cards – the game was over. Outnumbered, Lille kept fighting for a point and almost scored a late equalizer by Loïc Remy, who fluffed a header and the rebound afterwards. Minutes later the referee whistled for the final time and Bordeaux had kept the three points at home.

Takeaways
Besides the big chance that led to 1-0, Bordeaux’s offense in this game was terrible. It has to be said this was also due to the state of the game. They had an early lead, decided to protect that and basically gave up attacking all game long. For their defensive efforts from the fifteenth minute and on, Bordeaux deserve a big compliment. For now, they are out of the relegation zone.

Lille have a few very talented attackers, but the question lingers whether this 4-2-3-1 system brings the best out of all of those diamonds in the rough. The comparison with Lyon is easily drawn. Is this a club where the manager is currently limiting the ceiling for his players? Only time will tell. 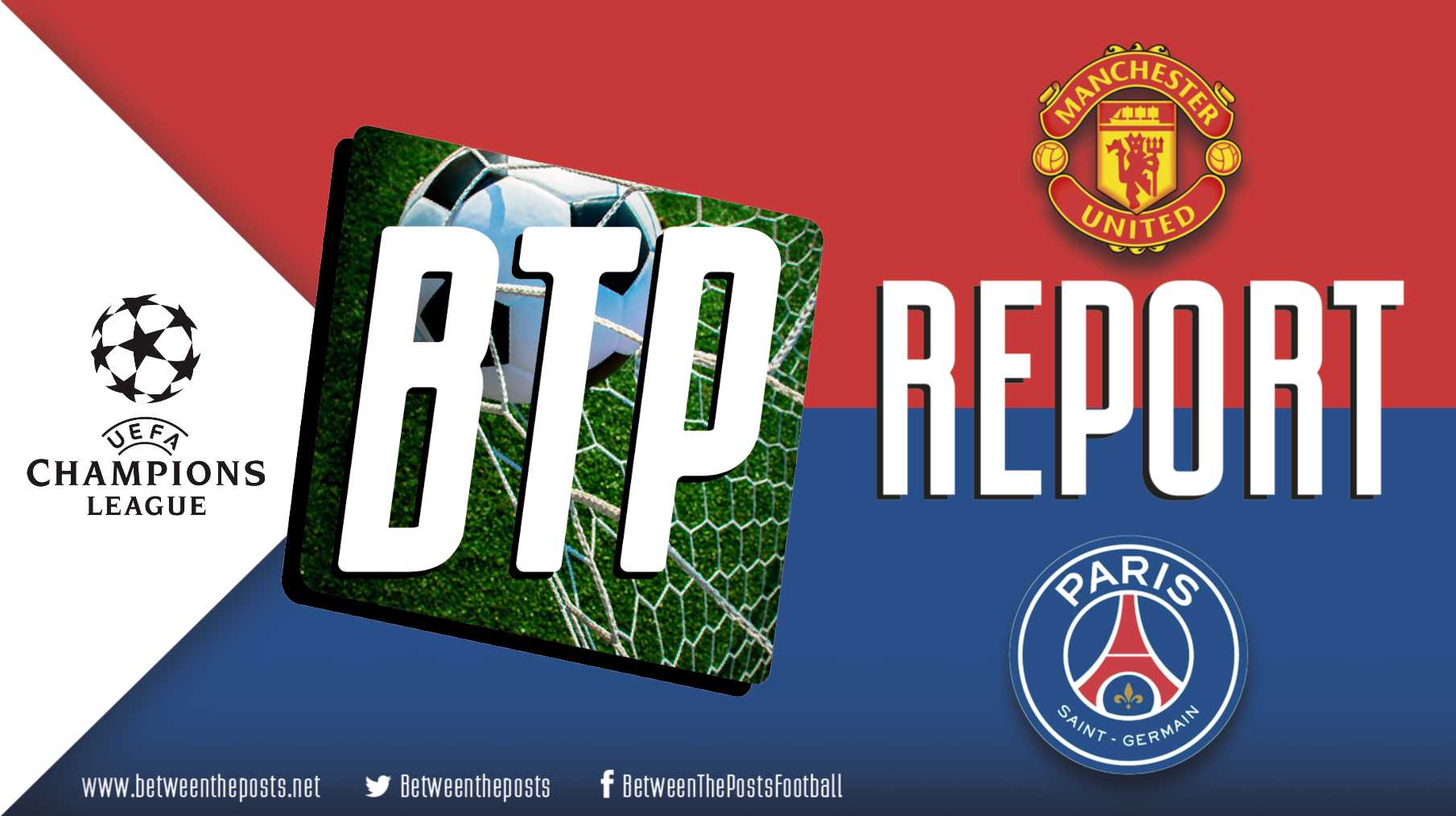 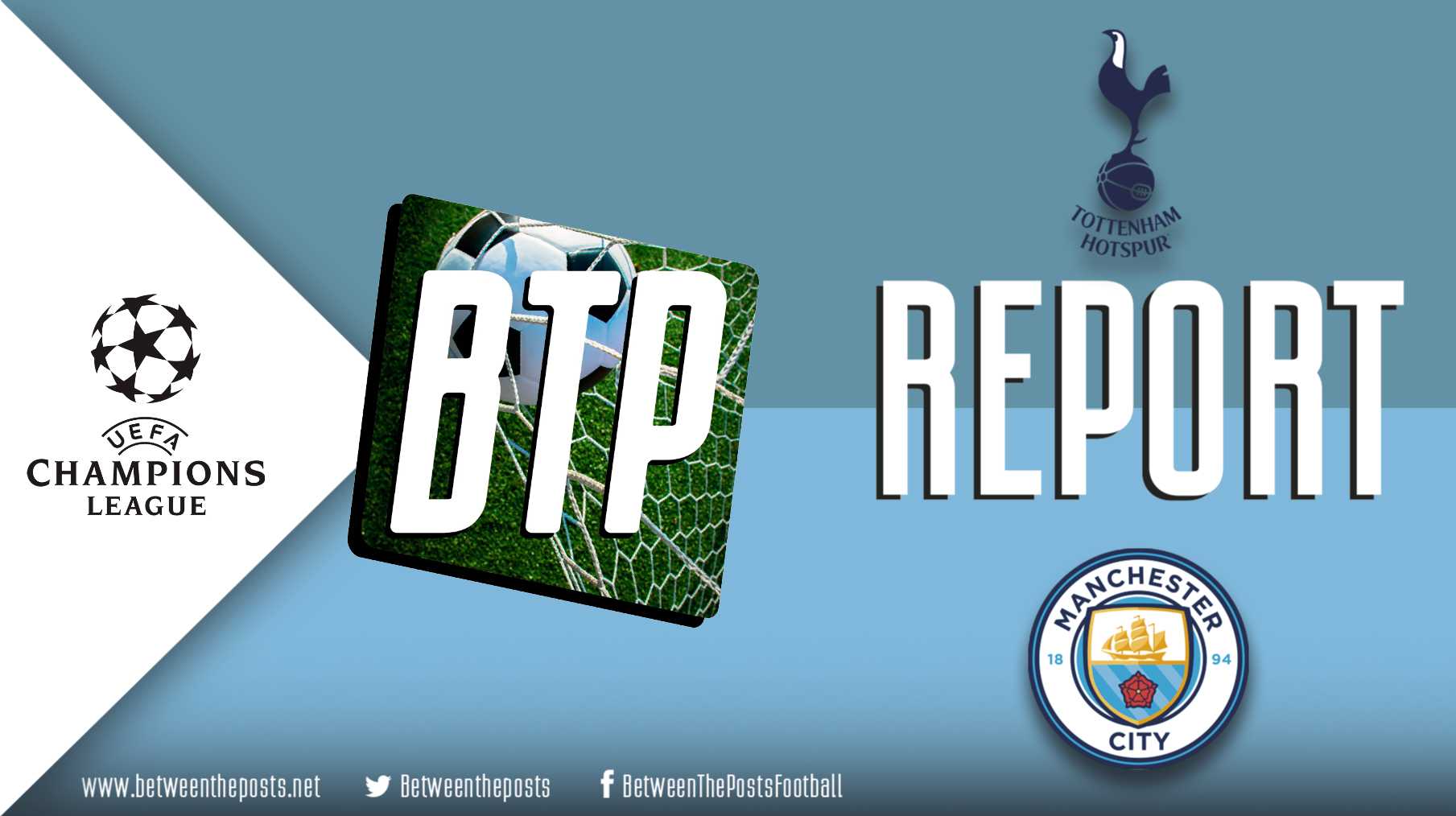