Manchester City was geared to attack Liverpool’s defense at pace, but if anyone wants to match their chaos, they rarely come out on the other side with points. Jürgen Klopp’s new 4-4-2 structure was the perfect platform to connect on the direct and spin behind a disrupted City backline.

Keep your friends close, but your enemies closer. Imitations of each other entered the fray; the story of Liverpool and Manchester City’s conflict has been two coaches merging their ideas to assert elite dominance over the rest.

This matchup has been the pinnacle of English football for the past five years. The blend of Jürgen Klopp’s pressing schemes and Pep Guardiola’s passing patterns has seen consistent high-level and highly entertaining football between the two teams. However, the start of the season has seen two giants split into different directions.

Liverpool sat thirteen points away from Man City, just two league wins from their first eight games. On the ball, their methods have appeared more stagnated, but it’s the vulnerability of the defensive line that has received the bigger spotlight. This has seen Klopp tinker with the shape: a rampant 7-1 victory over Rangers was sure to boost confidence at least.

This has come at a time when Guardiola has taken City to another level. Fifteen goals from the central cyborg give the infinite roster of creative midfielders a fixed point to work around. Perhaps the final piece in Pep’s perfect puzzle for world domination.

That being said, both systems can say that they rely on their starting right-backs in very different ways. Klopp only had Trent Alexander-Arnold available on the bench, with the veteran James Milner in his place, whilst Kyle Walker has recently sustained a longer injury. João Cancelo took his place, with Nathan Aké on the other side. Klopp opted for Roberto Firmino upfront and Diogo Jota on the left, whilst Guardiola pushed Bernardo Silva next to Rodri, Cancelo higher on the right and Phil Foden opposite.

This matchup has followed a strict narrative, especially at Anfield, of Liverpool relentlessly pressing out of the blocks, whilst City struggles to build. This played out differently as Klopp’s team aimed to maintain central compactness and focused more on sporadically pressing the backline. Liverpool was aligned in an asymmetric 4-3-3, which looked more like a 4-2-3-1 formation, with Harvey Elliott high on the right and any of the three forwards taking up positions on the other side.

Man City had a few phases where slopiness occurred, but could ultimately dictate the tempo at their own pace in a 3-2-5 arrangement. Nathan Aké was often part of the backline, João Cancelo held space on the right, with Kevin de Bruyne and İlkay Gündoğan positioned outside of the Liverpool double pivot. In possession, Rodri or Silva could drop inside of the wider center-backs to create a 4-1-5 formation and Gündoğan also moved to aid the circulation on the left. 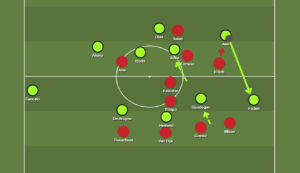 9th minute: Man City’s 3-2-5/4-1-5 formation in action, Silva and Gündoğan dropped to make space inside. Between the three midfielders, City constantly dropped a midfield into the backline to create better angles out.

Pep’s team looked comfortable when moving the ball across the backline, but progression was stunted once the ball funnelled towards Phil Foden or Cancelo in the opening phases. Liverpool doubled down on the widest option: the ball-sided forward, midfielder or fullback triggering the press and a pattern that affected Cancelo in particular early on.

However, if the visitors could funnel through, City was quick to engage vertically and always had an overload ready on James Milner at the back post. Transitions started to creep in after thirteen minutes, with De Bruyne connecting down the wider right channel and getting substance through a distanced Gündoğan shot, as well as a Cancelo cross that nearly saw the German put Foden through if his touch was better.

This was a very different aim from Guardiola. They may have integrated a lot of passes across the backline, but Man City was more geared to attack in transition/semi-transition. This could be seen in their set-up off the ball; De Bruyne and Gündoğan were positioned higher than Haaland, to maximize the amount of space the Norweigan could attack if their creators were to get on the ball.

City pushed high with Rodri on the Liverpool midfield, whilst Silva and Foden were tasked with supporting Aké when Klopp’s team had the ball higher up the field. After twenty minutes, possession swayed in Liverpool’s favor, but they were a lot more profitable once their forwards were isolated with the center-backs or on long balls. 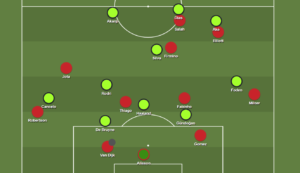 Jota and Andrew Robertson were close to opening the scoring, through a Virgil van Dijk long pass which saw poor coordination between Foden and Aké, whilst Fabinho was free to pick a pass. Milner put a low cross, inches away from forwards combining, but Robertson couldn’t produce on the follow-up. Long balls were the key component once Liverpool baited Man City further up the field and put Mohamed Salah in one-versus-one situations with Rúben Dias. Salah on the spin was a huge threat, but Dias produced important interventions in the first period. This being said, space around and outside Aké was not being exploited by Klopp’s men just yet.

On the flip side, City began to profit more from the transitions they had built and got to attack the Liverpool backline at the speed they desired. The switching from a three to a four opened up lanes out wide, Cancelo and De Bruyne combined more from deep, whilst Gündoğan and Silva swapped positions after half hour, with more output being produced in the left halfspace.

Advancements from Pep’s team lead to Haaland being engaged in front of the goal. Gündoğan slipped the goal machine through, having made an excellent run behind Joe Gomez. Still a distance from the goal and on the corner of the box, pressure from Van Dijk was enough and the chip over Alisson was not enough to beat the Brazilian. Haaland had a better chance once Foden worked the ball inside and De Bruyne had plenty of space to carry down the right. His cross from the right halfspace connected with Haaland, but his header didn’t test Alisson enough from close range.

All eggs into one basket

City increased their pressing intensity through Bernardo Silva spearheading some of the phases, but Liverpool’s 4-4-2 structure was well prepared in creating transitions of their own. Roberto Firmino and Elliott provided out balls from the defensive phase, whilst Diogo Jota and Mohamed Salah stretched Manuel Akanji and Dias apart on the transition.

These elements perfectly combined a few minutes into the second period: Gündoğan counter pressed Elliott, but without Rodri set, the passing lane opened to Firmino as Salah span Dias who aggressively followed his movement. With Salah clean through, a phenomenal save from Ederson put the ball around the post. 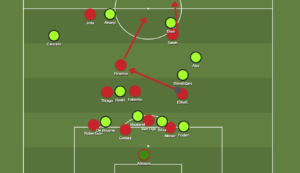 49th minute: Salah’s first chance. Connections between the lines (Firmino and Elliott) the perfect platform for the aggressors (Jota and Salah) to isolate the center-backs.

This is when the Premier League’s box office fixture kicked into gear. A corner wasn’t given and from the next phase, a sensational pass from De Bruyne almost connected with Haaland. Alisson failed to gather the ball properly and the loose ball saw Foden stick it in the net. Despite this, a foul on Fabinho denied City the opener, and from the very next phase of play, an incredible Salah cross saw Jota hit the outside of the post with a header.

The essence of control, Pep’s most important component, had gone out the window; replaced by chaos which favours Liverpool a lot more. Long passing phases were no longer in sequences and City even increased their tempo when on the attack, through more dribbling phases from Gündoğan in the middle and Foden off the left.

City phases followed a similar pattern: moving into the 4-1-5 formation and Rodri or a player in the first line switching to the widest player available. Gündoğan’s carries did play into great effect for a Haaland chance, as Silva dragged Fabinho slightly wider for Foden to play the German inside. Haaland was off-balance but still had enough to pull the trigger and test the gloves of Alisson from the edge of the area.

However, once you fall into the traps of matching Liverpool’s intensity, chances are you come out battered and bruised. Liverpool’s directness had the players between the lines to connect play and put Salah one-versus-one with Dias. A direct pass from Gomez to Firmino had City’s defensive line disrupted, with Cancelo too far away from Jota and Salah cut inside onto his left foot but put the ball wide of the post.

Liverpool’s 4-4-2 defensive block had built central compactness and City struggled to progress through the lines unless the widest player was connected and opened the pitch laterally. They had made progress when Thiago Alcântara fouled De Bruyne, but the results lead to devastating effects on the other side of the field. Alisson caught the free-kick, booted the ball over the halfway line and Salah superbly span Cancelo to charge through in goal. Ederson had denied him once from a similar position, but Salah rarely misses the same chance twice and opened the scoring. 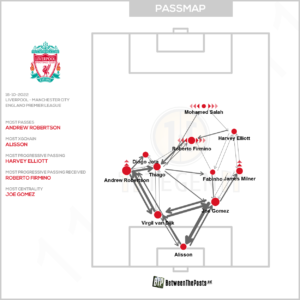 City dominated the ball in the last quarter, but chances dried up as they failed to find any solutions. Guardiola was adamant to make changes to his set-up, only putting on Julián Álvarez in the 89th minute, but it is not unusual for Pep to hold off in situations like this.

Nevertheless, it was Liverpool that really should have added to the goalscoring. Darwin Núñez had multiple opportunities to put his teammates through, whilst Trent Alexander-Arnold came off the bench to almost put the ball in the net. Klopp was sent off as hostilities grew between Silva and Salah, truly Barclays fashion in its biggest fixture. After Salah had scored, Liverpool had six shots despite completing just sixteen passes after 76 minutes.

This is still an elite Liverpool team, that has gone through cycles but ultimately has adapted to them. Klopp’s new 4-4-2 structure complemented very well between the lines and was the platform for Salah to hit the defensive line at pace. With West Ham and Nottingham Forest coming up, Liverpool can harness newfound momentum very quickly.

Defeat for City perhaps wouldn’t be such a problem at this stage, if they hadn’t come to Liverpool in the past and struggled to get a result. Four points now separate them and Arsenal, but if any team can return to winning-machine fashion it is Pep Guardiola and this Man City team. Nevertheless, Liverpool versus Manchester City remains box office action. 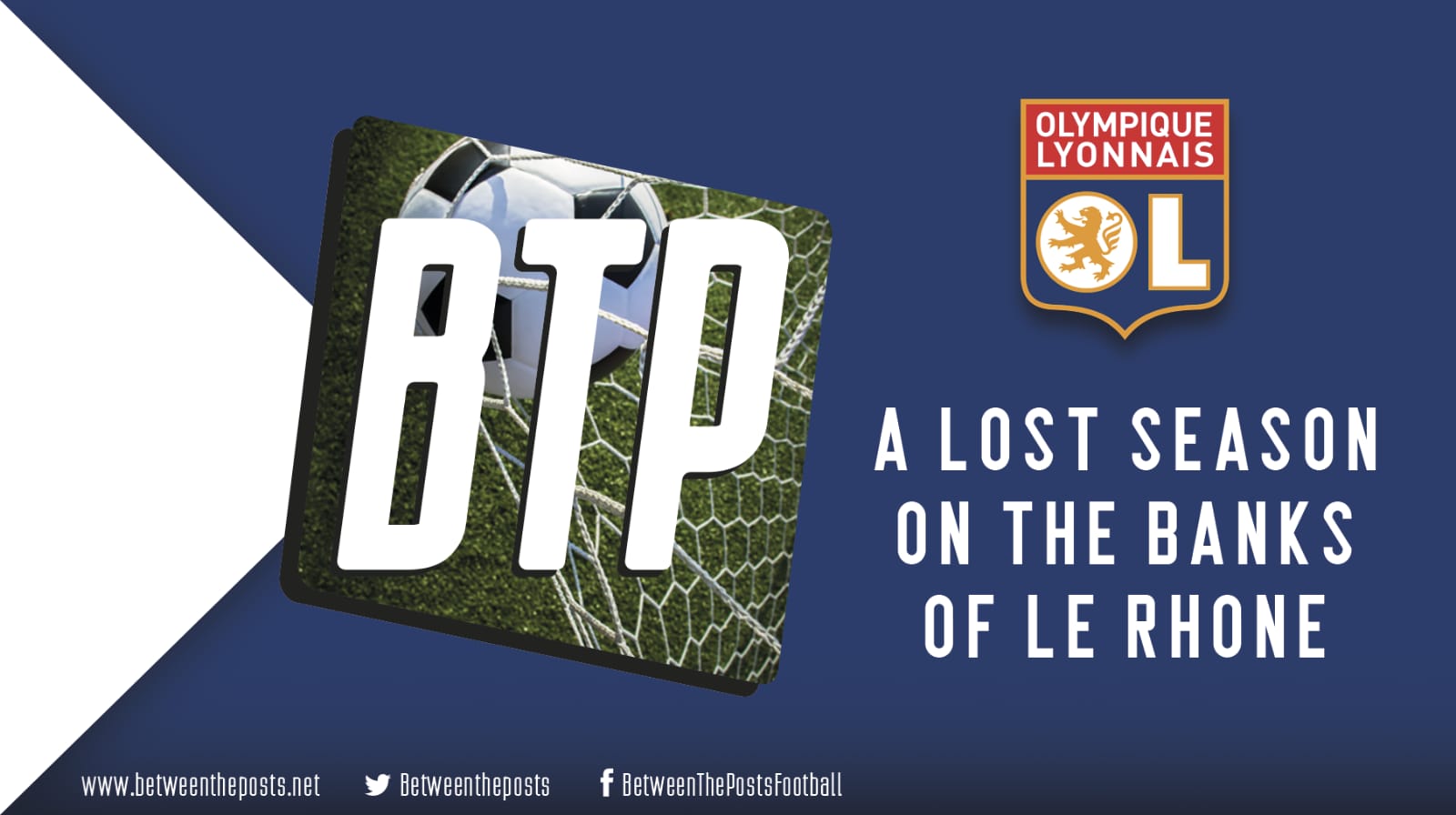 A Lost Season On The Banks Of Le Rhône