RasenBallsport Leipzig continued their fantastic form, producing a classic display against 1. FC Köln to take them just a point from leading the league. They broke down Köln’s 4-1-4-1 low block in impressive fashion, displaying a variety of passing sequences and transitions to give them access to the final third time and time again.

Matchday twelve of the Bundesliga season pitched two teams from East and West of Germany, yet positioned North and South in the league standings. Julian Nagelsmann has evolved RB Leipzig from an impressive block with fast attacking transitions, to an interchangeable and versatile offensive machine – which has seen them score twenty goals in their last four fixtures.

Naglesmann’s team selection is dependent on the opponent RB Leipzig are facing, but we often see them play in 4-2-2-2 / 3-5-2 formations. He would start with the former for the latest test, their only change coming at the right back position, where the injured Nordi Mukiele was replaced by Lukas Klostermann.

FC Köln’s return to Germany’s top-flight has not panned out the way they had hoped at the start of the season. Seventeenth in the table, two wins all season and a lack of chance creation and goal scoring; a dreadful record led to Achim Beierlorzer – only four months in charge – being sacked earlier in the month.

Markus Gisdol was appointed last Monday to turn the ship. Gisdol’s previous appointment was at Hamburger SV, who have not been seen in the Bundesliga since – two relegations on his resume apparently not shaking off the Köln board.

His first team shape at FC Köln would see them line up in a 4-3-3 formation, with Marco Höger and Anthony Modeste returning to the starting eleven.

As expected, Nagelsmann’s team quickly asserted their dominance from the first whistle, whilst Gisdol established a compact low block A low block refers to a team that retreats deep in their own half out of possession, generally only disrupting their opponents around their own box.
to nullify RB Leipzig’s attacking threat. Köln set up in a 4-1-4-1 shape, which could change into a 5-4-1 formation when Marco Höger dropped into the defensive line. This setup enabled RB Leipzig to camp in the opposition half and interchange as much as possible to break lines forward. 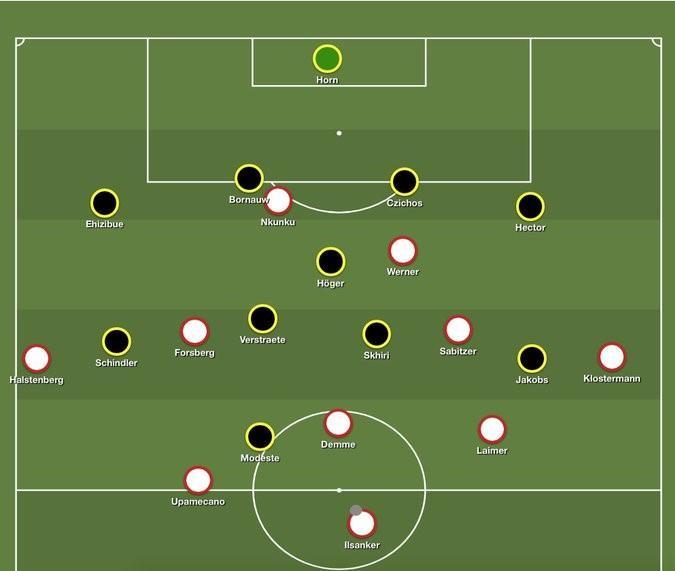 The positioning of the Leipzig players adapted and rotated as the match progressed, in constant attempts to try and create better passing angles to move the ball forward. Their double pivot, consisting of Konrad Laimer and Diego Demme, roamed across the middle third of the pitch and remained close between the center-backs and the attacking options.

Emil Forsberg and Marcel Sabitzer positioned between the space of Köln’s center-midfielders and wingers. This created space for their fullbacks down both channels – although Halstenberg would make more runs forward than Klostermann, who could also drop deeper to create a back three.

RB Leipzig’s passing structure was fast-paced, vertical and effective, but this was not reflected in the quality of their shots in the game’s early stages. Köln’s low block kept the Leipzig attack from getting into great areas in the box, due to the sheer amount of bodies in the defensive third. However, Nagelsmann’s frontline started to threaten and make dangerous runs, they just needed that breakthrough.

Repercussions out of the low block

In possession, Köln moved out of their compact low block and transitioned into an expansive passing structure. Both center-backs pushed wide of the box, Höger dropping into the space between them, whilst Ellyes Skhiri and Birger Verstraete remained close to the holding midfielder.

RB Leipzig also transitioned, moving into a 4-2-3-1 formation with Timo Werner dropping behind Christopher Nkunku. This enabled all three of Köln’s midfielders to be occupied in their buildup, with other potential options covered. Köln struggled to retain possession against this effective defensive shape put up by Leipzig, and were often forced to go direct to Anthony Modeste upfront. 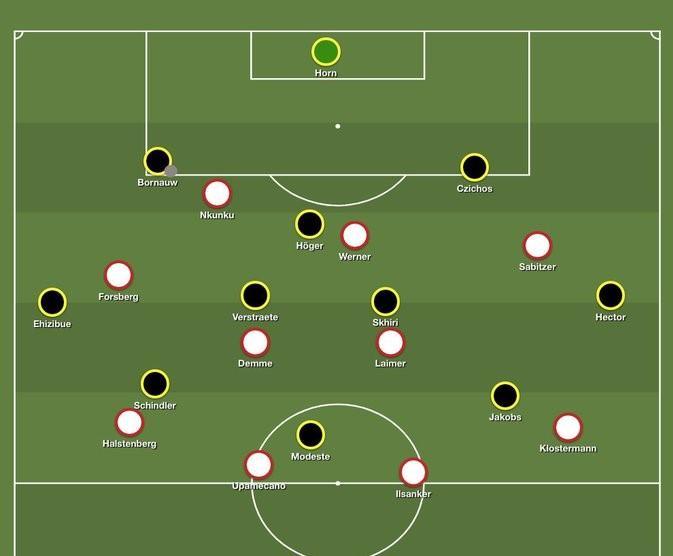 RB Leipzig’s 4-2-3-1 defensive shape forced Köln to hit the ball long if they were to move further upfield.

Köln’s issues when out of the low block started to show when they moved the ball into the attacking half. Overcommitting players left them vulnerable when RB Leipzig counterattacked, often having a vast number of players in between the lines. Köln were eventually caught out of their defensive shape to give RB Leipzig a first goal. Jonas Hector wandered off with possession, before Nkunku disposed him down that channel. A simple cutback into the penalty area towards Timo Werner had only one result: the easiest goal Werner will score this season and Leipzig had the lead after twenty-two minutes of play.

It was not long before Nagelsmann’s team put the game beyond reach, Dayot Upamecano drove the ball into the final third The one-third of the pitch that is closest to the opposition’s goal. before finding Nkunku in space. Dutch defender Kingsley Ehizibue committed the foul inside the penalty area for Emil Forsberg to convert from the spot.

Two soon became three for the hosts, the initial cross into the area cleared, but the second phase was unstoppable. Touch into space, left-footed, from range, Konrad Laimer picked out the top corner with an exquisite finish. A fine third for RB Leipzig, only for them to concede from a corner a minute later. Rafael Czichos’s header gave Köln a small amount of hope, even if it would come from just their second shot of the match. Four goals in seventeen minutes, classic Bundesliga action. 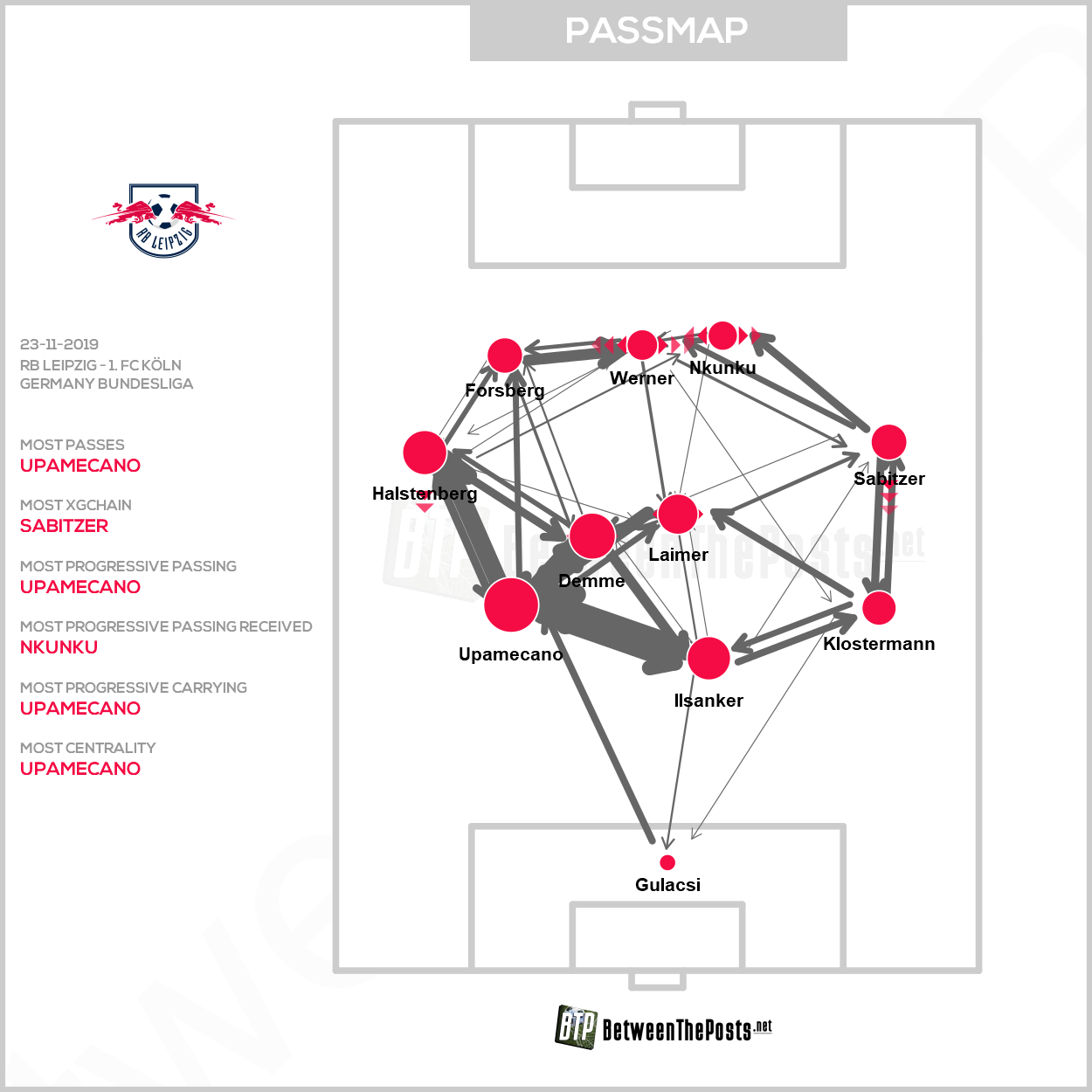 Nagelsmann’s team continued to control the match, finding multiple routes to access the final third. Marcel Halstenberg was a key progressor down the left channel, linking closely with Emil Forsberg and a roaming Timo Werner who moved into the halfspace to create an overload <i class=”fa fa-sort-desc” aria-hidden=”true”></i> <span class=”spoilerexplanation”>When one team has more players in a certain area or zone than the other team.</span> in this area. RB Leipzig made progress using a variety of passing patterns to break Köln’s midfield and defensive lines.

Up-back-and-through passes were used to break through the pressure from Köln’s midfield. Emil Forsberg would position in between the lines and occupy the space between the fullback and center-back. He was the key receiver in RB Leipzig’s attacking patterns, consistently feeding Timo Werner as well as enabling Halstenberg to either over or underlap runs forward, which depended on Forsberg’s positioning.

Vertical passes were also key for RB Leipzig in their ball progression. This gave them access into more central areas of the pitch, even with the amount of Köln players that were covering this area. All their attacking options consistently received the ball in dangerous areas.

They had a number of opportunities from close range, but it would be an immense free kick from Forsberg to hand them their fourth of the game. Two dummies, before Forsberg’s curling effort over the wall found the back of the net, just how every free kick should be scored. 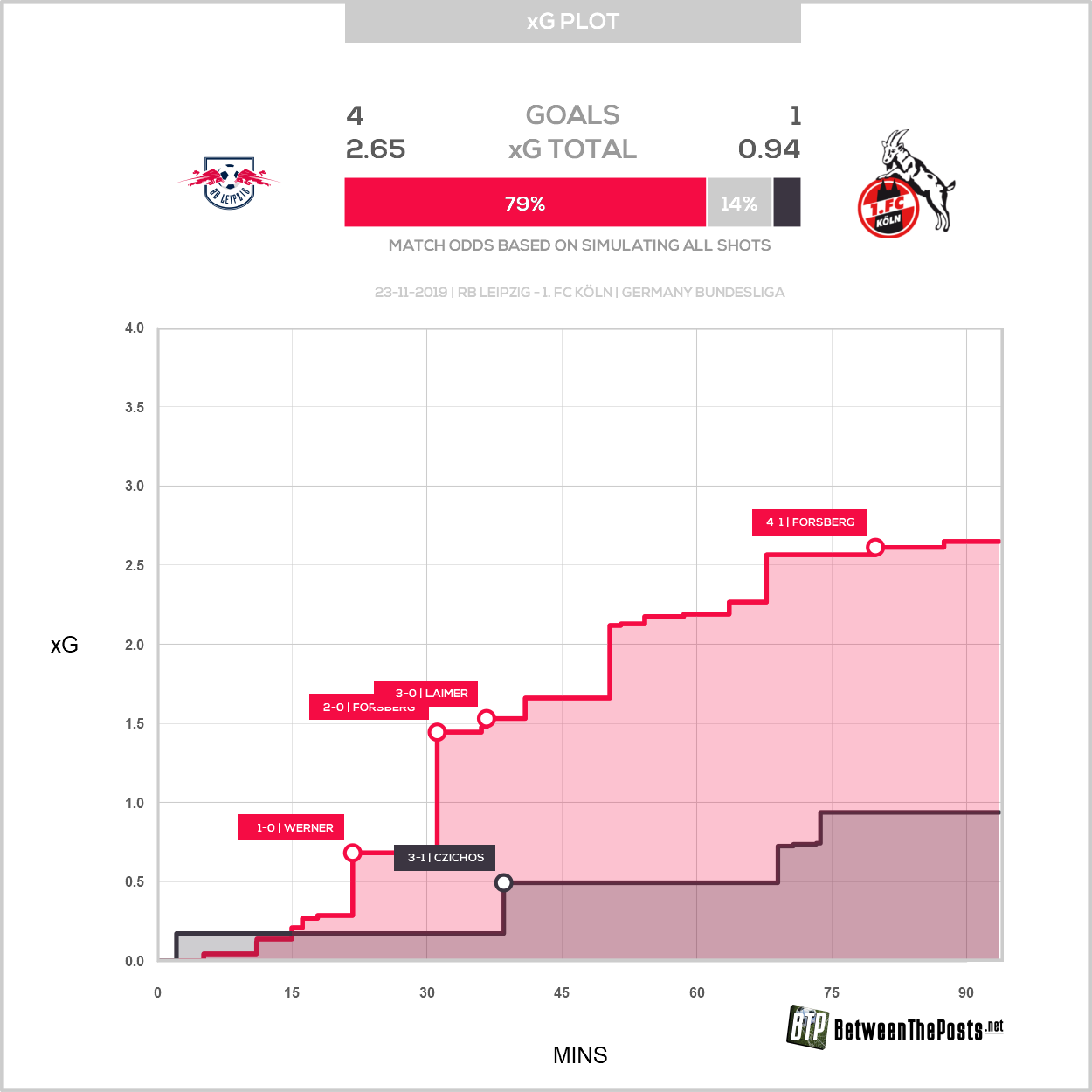 Yet another fabulous display from RB Leipzig, who are really starting to find some consistency under their new boss. The result leaves them just a point of top place, with a superior goal difference too. Julian Nagelsmann has a great fixture list to continue building his teams form, with Benfica in the Champions League and Paderborn next in the Bundesliga, they have certainly established their title challenge this season.

Markus Gisdol was not given the kindest of fixtures to begin his latest managerial stint, but games against Augsburg and Union Berlin will hopefully see more of an attacking threat from Köln, rather than just sitting in a low block for a majority of the match. It will be a tough job to carry them out of the relegation zone, but one that is certainly doable. 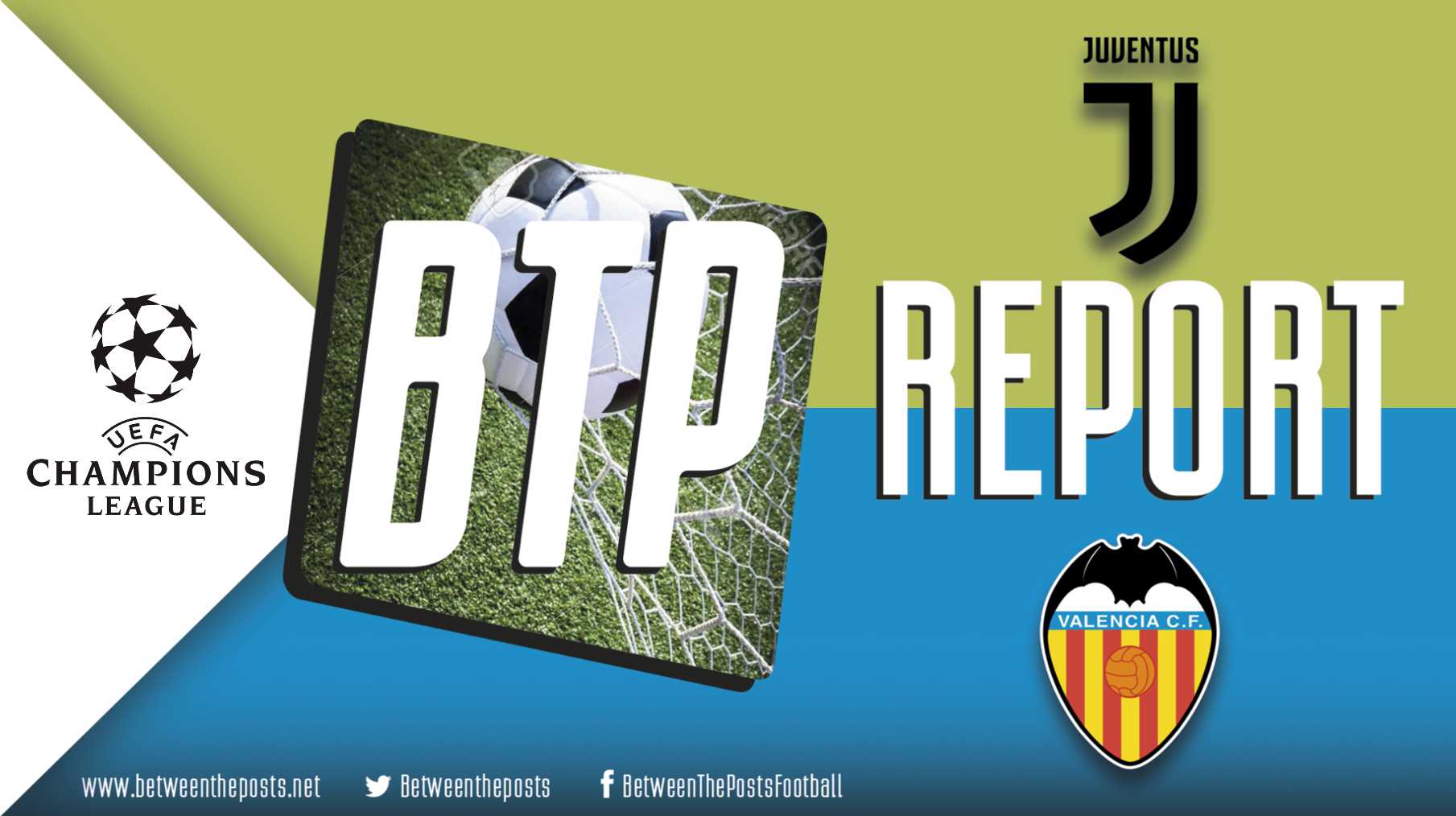 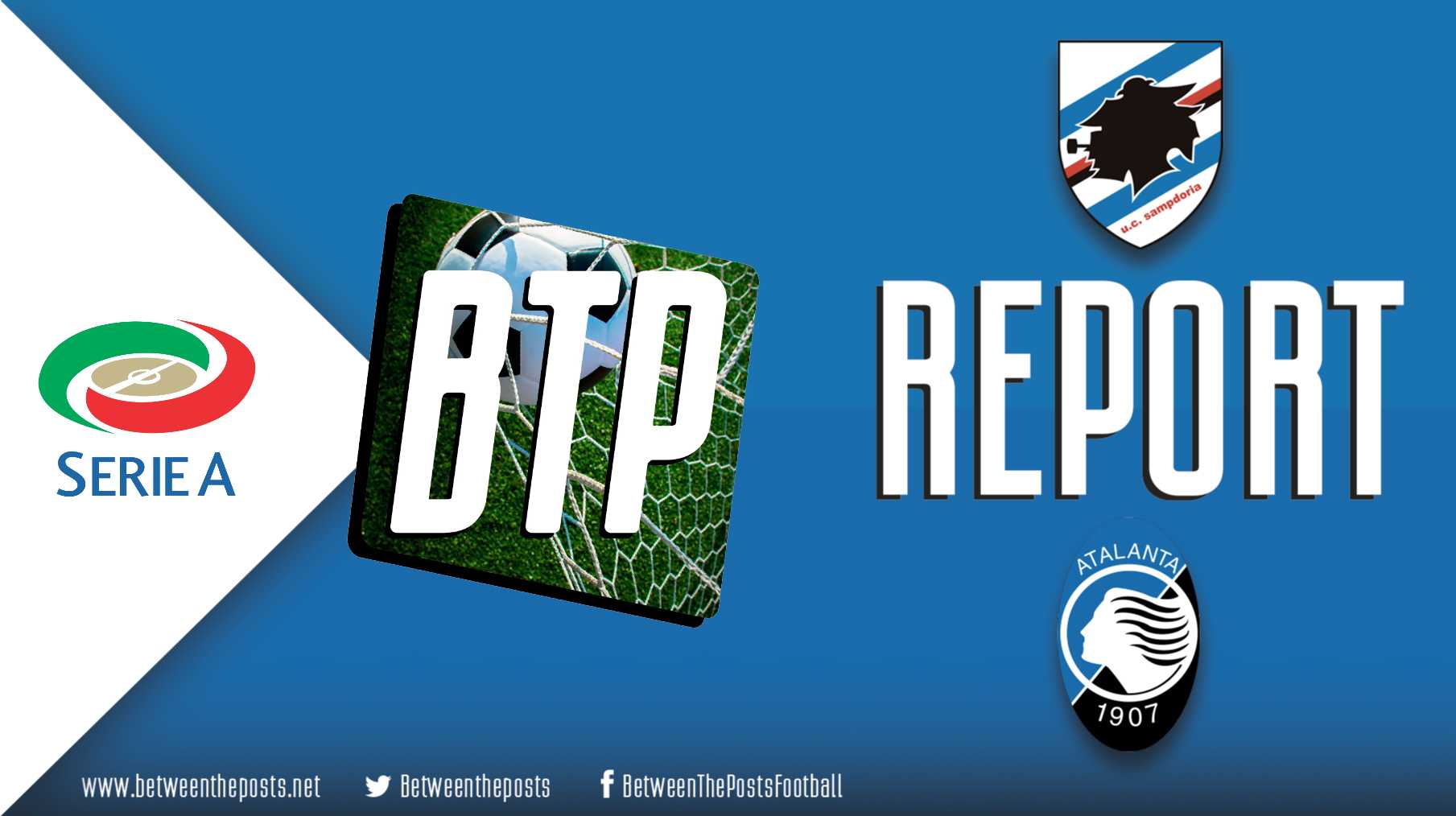