Tweaks to the buildup shape and solid defensive organization helped RB Leipzig overwhelm Borussia Mönchengladbach in the first half, which set the stage for new manager Domenico Tedesco to claim victory on his debut. On the other hand, counterpart Adi Hütter may just feel his seat getting warmer, as Gladbach slumped to a third consecutive defeat in uninspiring fashion.

Following an uneven campaign with a few impressive wins and a fair number of shocking defeats, Jesse Marsch is finally out as Leipzig manager. Reports indicated that players took issue with the American’s tactical prowess, and it appears as though his one-dimensional football did not jibe with the possession identity to which Leipzig had moved under Julian Nagelsmann. Though the previous coach never won a trophy, the work he had done on the training ground took Leipzig away from the pressing-focused ideas fostered by Ralf Rangnick. Now, Leipzig like to keep the ball, and former Schalke boss Domenico Tedesco is the man they have tapped to further entrench this identity change.

In the past, Tedesco has often favored a back three, and the trend continued in his first game since taking charge of the club. Joško Gvardiol, Willi Orban and Mohamed Simakan were the central defenders, with wingbacks Angeliño and Nordi Mukiele on either side. Kevin Kampl and Konrad Laimer formed the double pivot, with Emil Forsberg supporting the front two of Christopher Nkunku and André Silva in the 3-4-1-2 shape.

While Leipzig have had their share of struggles, Adi Hütter’s 5-3-6 record since taking over shows how difficult it has been in his first season in charge of Gladbach. Making matters worse was the fact that Gladbach came into game having suffered heavy defeats against Köln and Freiburg, letting in ten goals and scoring just one across two games. While a tie against Leipzig is always difficult, the managerial change represented an opportunity to snap the losing streak with a huge victory.

That thinking fed into the line-up selection, where the 4-3-3 shape was unexpectedly chosen. Matthias Ginter and Nico Elvedi were the chosen center-backs, with Ramy Bensebaini and Joseph Scally picked as the fullbacks. Kouadio Koné and Jonas Hofmann lined up on either side of holding midfielder Denis Zakaria, while striker Marchus Thuram was supported by Lars Stindl on the left and Breel Embolo on the right.

Right from the beginning, there was something different about the way Leipzig progressed the ball from their own third. Laimer played as the sole holding midfielder in front of the defense, while Kampl moved over to the touchline. The wingback Angeliño then moved forward, while Forsberg also oriented himself towards the left. Silva alternated between the two center-backs, but focused on keeping them occupied rather than coming short. In the No. 10 space, Nkunku had freedom of movement, occasionally moving wide and often coming inside to receive and turn.

With these sort of movements (which were repeated throughout the half), it was clear that Tedesco had recognized where his players excelled. Angeliño is defensively suspect, but is exceptional at putting in crosses and cutbacks after receiving on his left foot. Nkunku is an associative player who is capable of winning one-versus-one battles, while Forsberg is a creative player who nevertheless finds it difficult to work without support.

By staggering them in this way, Tedesco ensures that Leipzig had double width on the left, and players were allowed to move in and out of these spaces so long as the touchline was occupied in the specified manner. The idea was to reduce distances between his most creative players so that they could play their way out of pressure using one-touch passes. Additionally, they would also have support after turning their marker, since Nkunku (for example) could drive with Angeliño on the left (or inside), Silva darting across and Mukiele who came steaming into the halfspace and center.

It was an intriguing detail which Gladbach found difficult to counter in the early going. Moreover, as they began diverting more resources to stopping the sequence on the left, a underload began appearing on the right, which Simakan exploited through his carries and by using Mukiele to drag away the lurking defender. This happened late in the first half, though the structure described previously was also visible on the right with Laimer and Mukiele (which led to an opportunity before the first goal).

In these scenarios, Leipzig had three players who occupied the defense, since Angeliño would simply invert himself and join the front two of Nkunku and Silva. All in all, Leipzig’s buildup and offense was fun to watch in the first half, as they put Gladbach in a bind with their positioning.

Leipzig dial back the press

Initially, Leipzig did what we expect them to do, which is press high on the Gladbach goal kicks. One such sequence seemed to work after Ginter was forced into a long ball, but Thuram managed to shield the ball before laying it off for a flowing attack. This repeated itself a couple of times, as Angeliño joining the front two in pressing resulted in gaps in midfield that Gladbach exploited with their physicality and ability in the air. The success of the long ball method seemed to signal to Tedesco that the press can be dialled back a bit, which is exactly what happened.

In its place, we saw a 5-2-1-2 structure which was vertically compact and was flexible in moving to cover the flanks. 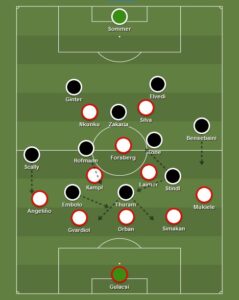 The issues with this structure arose when Laimer and Kampl became static in midfield, since Koné, Stindl and Hofmann could then drop and take advantage of the gaps on either side of the double pivot. In particular, Zakaria and Koné tried to play through Leipzig in this manner, since operating through the wings was reserved for the final third. Stindl tried to get on the ball as much as possible behind the midfield, with Thuram shifting to the left and Embolo moving centrally. Hofmann then alternated between supporting actions in midfield and trying to break through with runs in behind Gvardiol.

However, these scenes were minimized when the double pivot or wingbacks were active. Mukiele and Angeliño could move up to flank the midfield duo, which took away the space available in the halfspaces. This was more effective on Leipzig’s right, since Mukiele could take Stindl out of the game and Bensebaini remained deep. On the left, Angeliño was more careful, since he had both Scally and Embolo to deal with.

Overall, though, Gladbach were better when they went long, since their forwards could physically overwhelm the defense to contest the ball. Progressing through Leipzig proved more difficult, given how the hosts defended the center.

For the majority of the first half, Leipzig were clearly the more intense and eager side. That changed somewhat in the second half, with Gladbach showing a bit more fight going forward. Unlike in the first half, Stindl seemed to be operating more as a false 9 in the second, with Koné and substitute László Bénes supporting the captain. Still, Leipzig could have killed off the tie after Nkunku stripped Sommer of the ball way outside the box, but Silva unexpectedly failed to finish despite being presented with an open target.

Later, Alassane Pléa replaced Stindl, but Leipzig’s spate of substitutions saw the introduction of fresh legs that preserved the status quo. Though Bensebaini’s late goal cut the deficit in half, stoppage time goals from Nkunku and substitute Benjamin Henrichs capped off a fine debut win for Tedesco.

Parting with Marsch was probably for the best, as the American seemed to have lost the locker room with his tactical ideas. In Tedesco, Leipzig have someone who can coach a few possession ideas in the short term, and the short length of the contract allows the front office to find their manager of the future. However, Tedesco himself has an opportunity to prove himself by getting Leipzig back to Champions League places. It is a tough undertaking, but Leipzig’s talent differential should make it a slightly easier task.

We decided to make this article free to read. If you want to support our work, consider taking a subscription 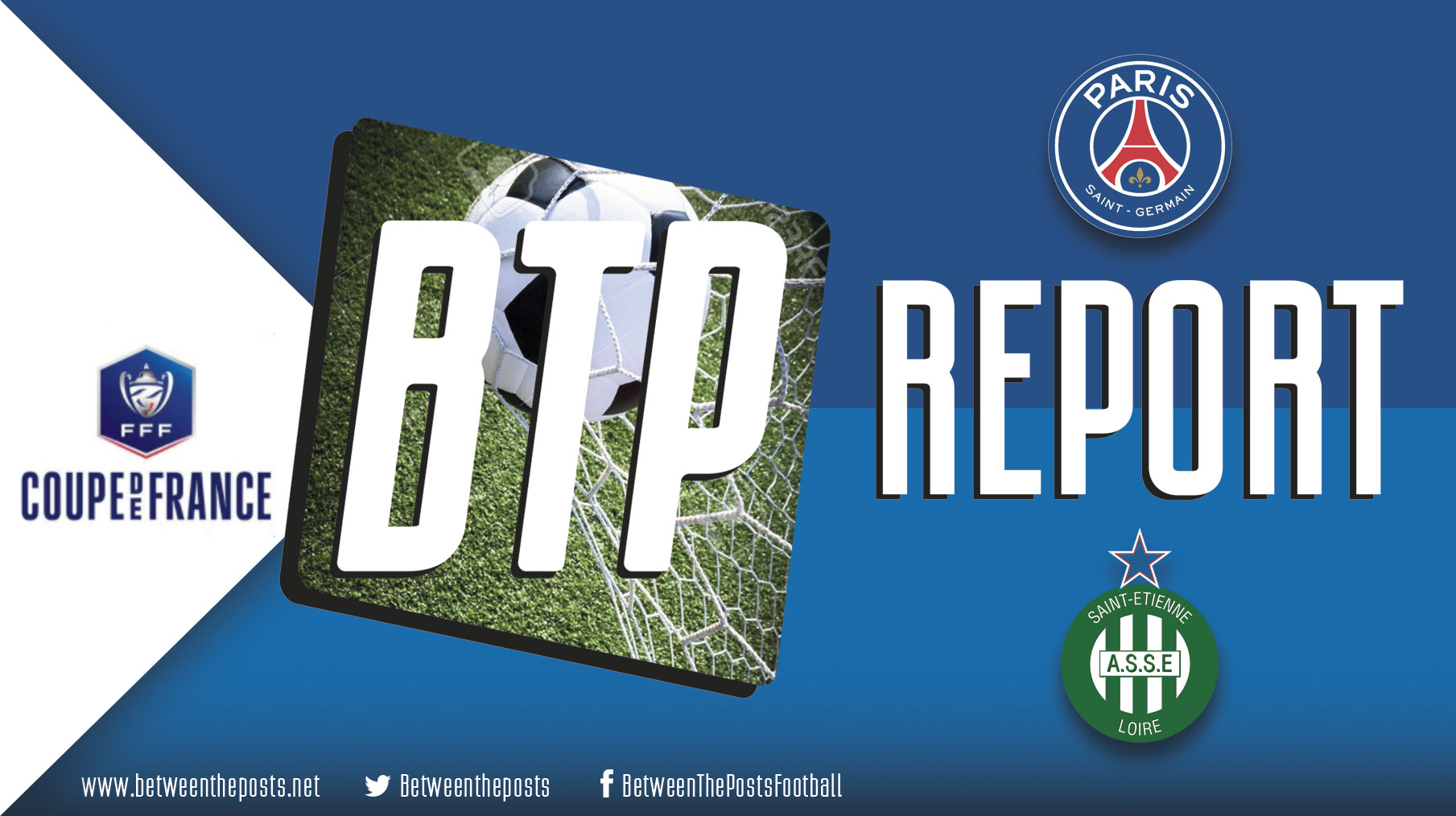 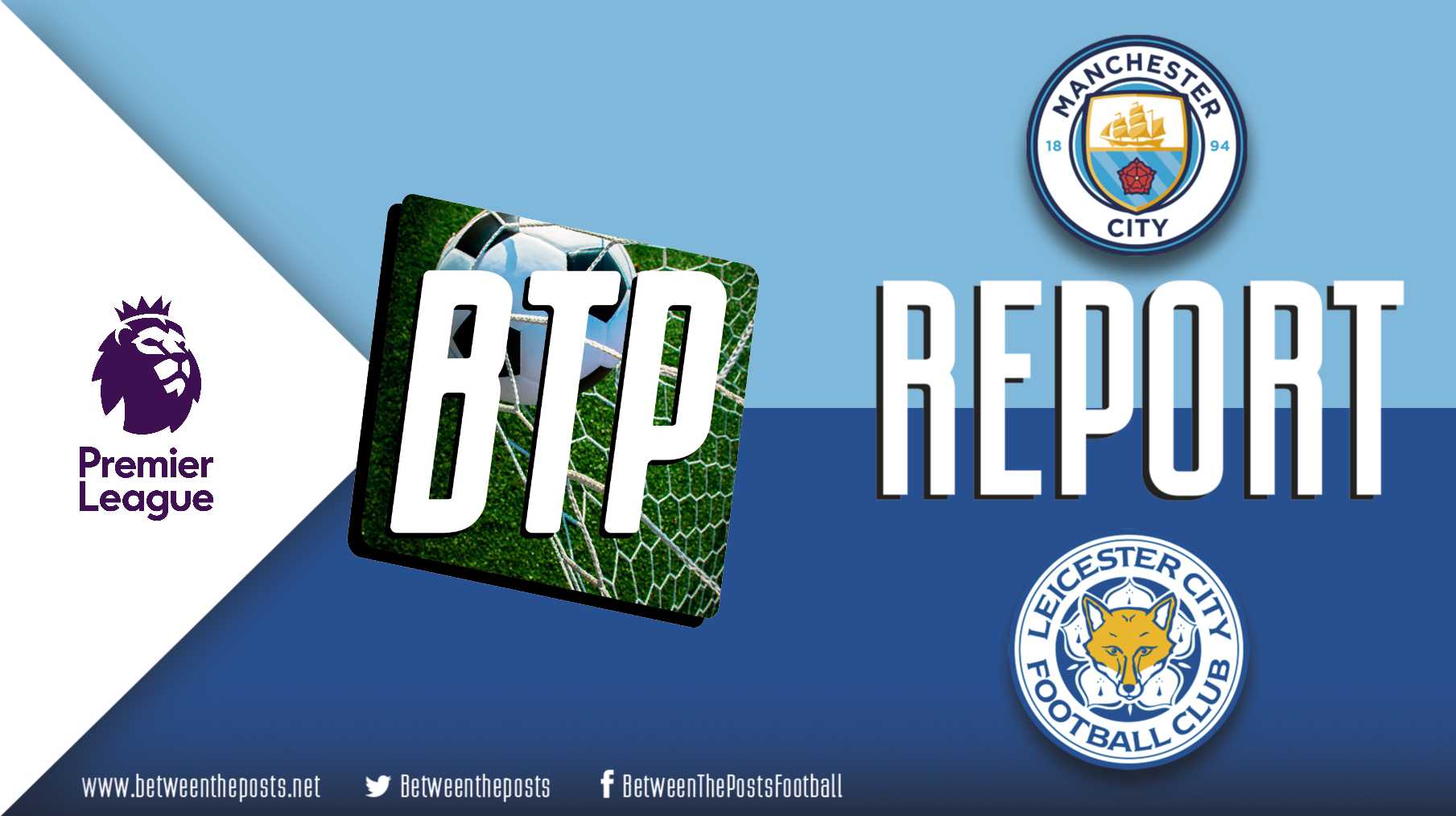