US Sassuolo – AC Milan: deadly counterattack of Milan proves too much for Sassuolo (1-4)

AC Milan’s fast attacks and individual quality in the final third gave them a much-needed win away from home against Sassuolo. The home team’s possession led to few chances while they were made to pay for their mistakes by a Higuaín-less Milan.

Sassuolo are currently the hot team in Italian football and came into this game as Serie A’s number three after a routine 2-0 victory midweeks over SPAL. Manager Roberto De Zerbi rested many of his key players in that game, but Federico Di Francesco, Domenico Berardi and Kevin-Prince Boateng all returned to the starting eleven today to face AC Milan.

Gennaro Gattuso was without his two most important summer signings. Gonzalo Higuaín was ruled out with a thigh strain and centre-back Mattia Caldara has a similar muscle problem. Higuaín’s understudy Cutrone also has fitness issues and started on the bench, only being used as a substitute in the last twenty minutes of the game.

Both managers opted for a 4-3-3 formation as usual. However, the tactical approach of the two sides was very different. 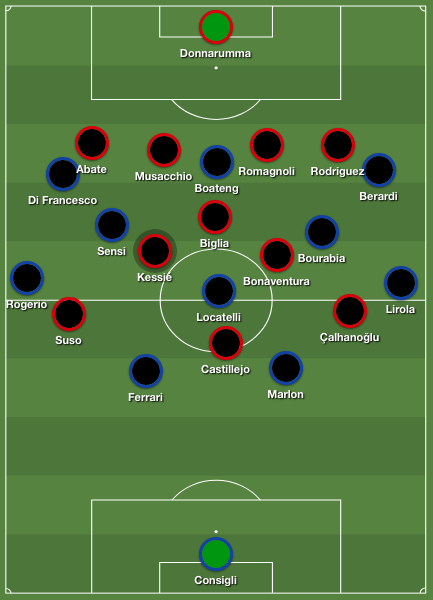 Positioning of both teams when Sassuolo had the ball.

Milan’s intense defense
AC Milan’s approach in defense is an embodiment of their manager’s own playing style: aggressive, intense and sometimes ill disciplined. Above everything else, their focus was on applying good pressure to the ball-carrier in almost every situation.

When Sassuolo were building up in their own third, Milan would not sit back and wait. Rather, they would defend high up the pitch, shifting zonally in their 4-3-3 shape and applying intense pressure to the player about to receive a pass while the ball was in motion, using well-drilled pressing triggers. A pressing trigger is a specific pass or movement by the opponent that draws out a coordinated team press. Although Sassuolo are fantastically well organised in possession – a trademark of manager De Zerbi’s teams – they often struggled to deal with the organisation and sheer intensity of this pressing.

The most interesting aspect of Milan’s defensive approach was when Sassuolo had possession in the middle third If you divide the pitch in three horizontal zones, the middle third is the most central area. of the pitch. It is increasingly unusual in football, especially from a team that does not look to have the majority share of possession, to apply as much pressure to the ball as Milan did while Sassuolo where circulating the ball in that area.

No strategy in football has only upsides, however. Midfielders Franck Kessié and Giacomo Bonaventura joined what was almost a front five as they were pulled out of midfield while pressuring Sassuolo’s deep midfielders. This allowed Sassuolo to find lots of space to attack once they managed to find that one clever pass behind the first pressing line, or win a one-versus-one battle out wide.

Despite a good level of pressure on the front line, Milan’s back four remained relatively deep all game, not allowing Sassuolo any opportunity to play balls into space for Di Francesco or Berardi. Milan was in a way reminiscent of Atlético’s “bend but not break” approach in defense by allowing Sassuolo some shooting opportunities from around the edge of the penalty area, but limiting the amount of chances from inside the box.

Sassuolo’s defensive transition key
Without falling victim to hindsight bias, Milan’s approach seemed to make logical sense. Sassuolo are a very organised team on the ball, who position themselves smartly and find gaps within the opposition lines. However, the individual quality of their players outside of their front three is questionable. Sassuolo’s center-backs and central midfielders looked fairly vulnerable and rushed at times under pressure. Despite their well-organised attacking shape, this made them vulnerable to counter attacks.

It should be noted that despite their rather conservative style, they did show some good quality on the ball. One of their biggest chances came in the 30th minute, when Berardi played a nice ball through the compact Milan defence for Di Francesco, who could not convert.

Sassuolo’s vulnerability was most overt on turnovers in Milan’s half. On-loan holding midfielder Manuel Locatelli – who was facing his parent club – was often caught too high up the pitch trying to regain possession quickly, which afforded Milan lots of space for counter attacks. The best example of such a situation was in the build up to the opening goal of the game. In the 39th minute, Franck Kessié won the ball in his own half and took it past Locatelli, then sprinted 75-yards with the ball at feet before firing home for the opening goal.

Milan’s second goal – in the 50th minute –  came from a turnover in a very similar area of the field. As soon as Milan won the ball, a long outlet pass was enough to set up Suso who brought it down, protected the ball, beat the defender and curled a beautiful effort into the top left corner. 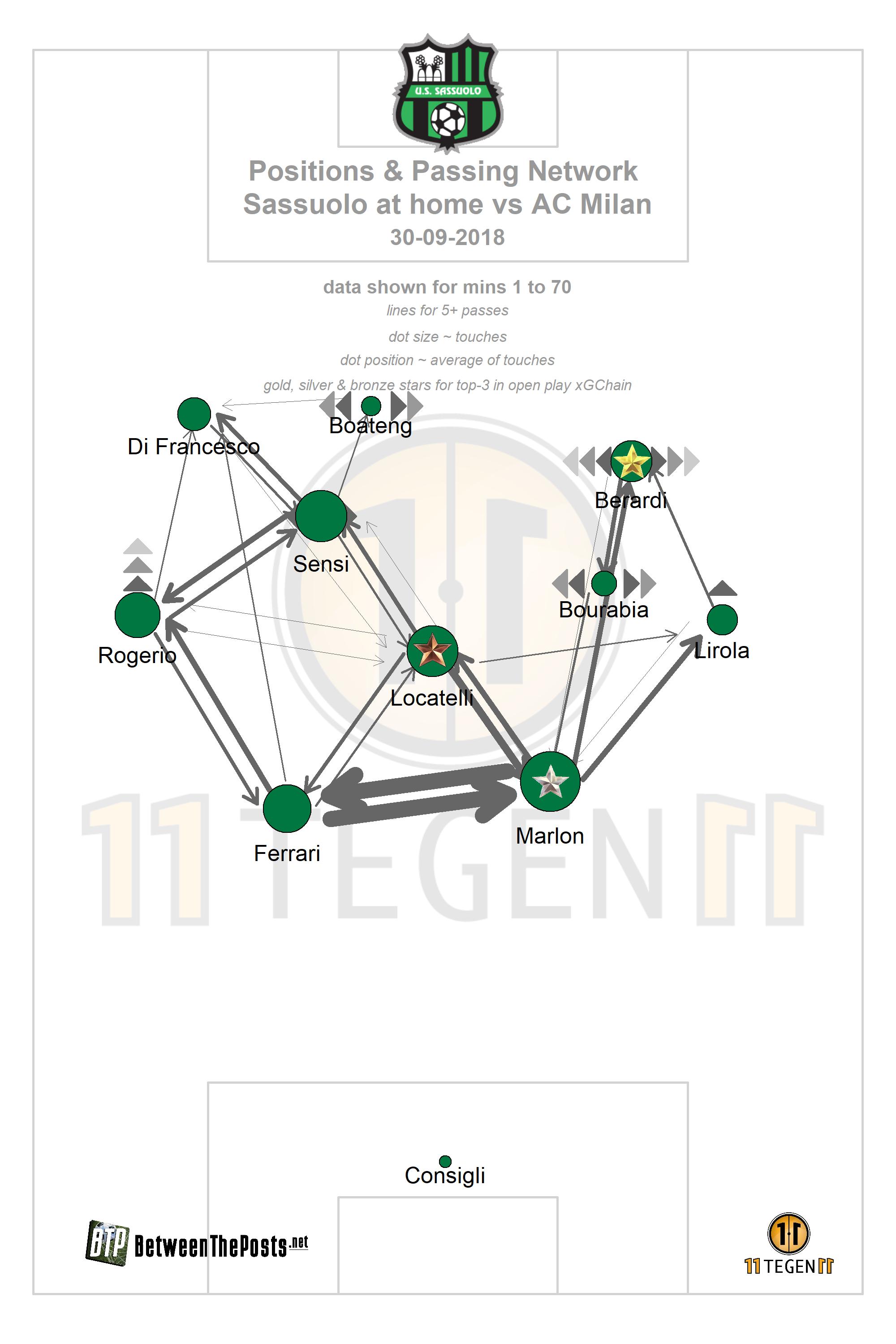 One-dimensional Sassuolo
Sassuolo did impress with their control over vast periods of the game, especially in the first half. They varied their build-up by using switch passes A pass from one side to the other. as well as passes from the centre to the feet of the wingers who would then dribble into space either side of Biglia. The home side also showed some very slick combinations and rotations on each wing in possession, doing enough to disorientate Milan’s midfield line but ultimately failing to create space where it really matters.

The bottom line of all of this is that Sassuolo never managed to really sting. Fittingly, it was Milan who scored the next goal. An out-of-character long spell of Milan possession ended with their winger Castillejo netting the third in the 60th minute. After this, Sassuolo chased a three goal deficit, committed more players higher up the field to attack, and were even more vulnerable on the counter.

Sassuolo got some hopeful cut-backs into the penalty area from their fullbacks, as well as deeper crosses into Boateng. However they struggled to find a way to unlock Milan’s organised defensive block. They got their consolation goal of one of their shooting chances from inside the box, as Đuričić finished and put 1-3 on the board with a very controlled shot in the 68th minute.

Still leading by two goals, Milan sat deeper and tried to absorb Sassuolo’s industrious attacking, successfully managing to see out the game that way. Suso managed to score Milan’s fourth goal from a deflected free kick in the last minute of injury time, which was a nice extra for the Spaniard, but the game was already won by then.

Takeaways
AC Milan’s outperformance of Expected Goals due to some world-class finishing, particularly by Suso, lead to a rather inflated scoreline. Nevertheless, this was a vital three points as a loss would have left them teetering just above the relegation zone. Their aggressive defending and efficient counter attacks may serve them well in picking up some important results on the road this season.

It is a testimony to Sassuolo’s development in recent years that a defeat to AC Milan is seen as a surprise. Sassuolo looked good in possession and entered the final third with ease at times, before falling short in two crucial phases of the game: turning offense into quality shots and limiting the opponent after losing the ball.

In the slider below, you can find Expected Goal plots, and various other match plots.