Domenico Tedesco’s plans for an upset against Bayern were crushed by an early goal from James Rodríguez. Thanks to excellent fullback play by Joshua Kimmich and David Alaba, Bayern nullified the Schalke press and cruised to victory.

This season, Domenico Tedesco’s Schalke 04 is still without a win in the Bundesliga. Not a great time to be playing the high-flying Bayern Munich – but is it ever? Last season, the 33-year-old coach revitalized Schalke with a mix of stout defending, excellent pressing and occasional glimpses of possession football.

Tedesco could seemingly do no wrong. From changing formations mid-game to deploying the attacking midfielder Max Meyer as a deep-lying playmaker or bringing in a game-changer like Leon Goretzka down 0-4 against Dortmund and rescue a point with a 4-4 draw. It all worked, and by finishing the season in second place Schalke qualified for the Champions League.

The summer departures of Meyer (Crystal Palace) and Goretzka (Bayern München) forced sporting director Christian Heidel to retool the midfield. Sebastian Rudy (from Bayern) joined the team late and has so far not thrived in the Meyer role.

In fact, all of the attributes of last season’s Schalke side have vanished. The pressing is disorganized and late, and the loss of Benjamin Stambouli to injury has left the responsibilities of the buildup and long passing to the powerful but technically limited Naldo and Salif Sané.

In a 1-1 home draw against FC Porto in the Champions League last Wednesday, Schalke showed improved pressing and some better individual performances from the likes of Weston McKennie and Breel Embolo.

Tedesco made two changes to the squad from Wednesday, with Rudy in for Nabil Bentaleb, and Suat Serdar giving way to Franco di Santo. By including the Argentinian, hard-working center forward, Tedesco’s game plan was to press Bayern high early, defend ruggedly and hope to score a goal off a set piece or a counter-attack. That Schalke blueprint worked spectacularly last season, as they won six matches in the spring by a one goal margin.

Niko Kovač’s Bayern side have been flawless so far and the focus on increased running in preseason has yielded dividends in Bayern’s improved transition game and counterpressing. With two goals apiece in the Bundesliga, Arjen Robben, Thomas Müller and Robert Lewandowski are firing on all cylinders. Thiago Alcantára looks to be back to the heights of his 2016/17 campaign, passing teams to death from a deep-lying midfielder role. The defense has conceded a minuscule total of fifteen shots in three matches so far.

The only issue for Kovač so far have been injuries. Kingsley Coman and Corentin Tolisso are out for the remainder of 2018. Rafinha is set to miss a month, leaving Bayern with only two fullbacks, Joshua Kimmich and David Alaba, on its roster. The Bayern coach continued his rotation policy, with the rested quartet of Müller, Goretzka, Thiago and Niklas Süle getting the nod.

Pressing Bayern is nearly impossible
One surprising element of Tedesco’s defensive tactic was deploying the defensive-minded center-forward Franco di Santo not in the predicted man-marking role against Thiago, but deeper in central midfield. Playing in their customary 3-1-4-2, the fullbacks Daniel Caligiuri and Alessandro Schöpf were tasked with pressing Alaba and Kimmich. Below an example of the patterns in Schalke high press in the 6th minute, with Alaba in possession. 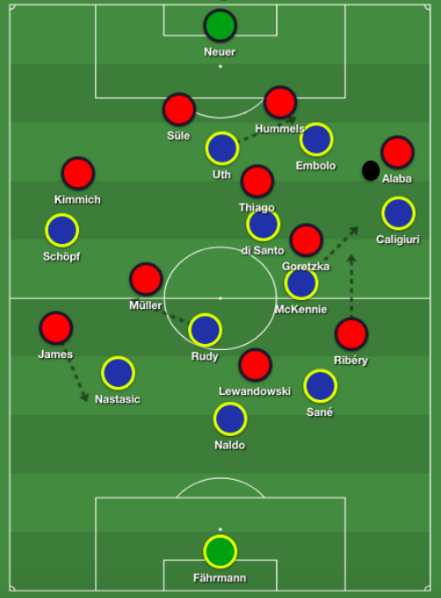 In this situation, Alaba ends up playing a long ball that Lewandowski controls to Ribéry, whose switch finds James wide open and his pass just misses the darting run of Goretzka.

The difficulty in pressing Bayern lies not just in timing, but in the so-called pressing resistance – the ability to retain possession in tight spaces against pressure, thus ‘resist’ it – of Kovač’s side. The number of combinations they can play via Alaba and Ribéry on the left or Kimmich, James Rodríguez and Müller on the right and Thiago in the middle make it extremely difficult to win the ball from them.

Schalke were extremely effective in pressing their opponents last season, but Kovač’s tactical setup anticipated this. Hummels and Süle are two of the best passing center-backs, and Manuel Neuer is the original ball-playing goalkeeper.

But the two Bayern fullbacks might be the best at escaping pressure. In the the fifth minute for example, Kimmich evaded two challenges before a pass to Alaba. The left back was at the other edge of the center circle and continued the play with a midfield dribble, then ended up with a layoff on the edge of the box to Müller. This kind of inside fullback play is unparalleled in world football, but there is more. In possession, Thiago drops deep to collect the ball and sprays it all over the field to the dynamic Goretzka or the tricky Ribéry. Not to mention the interchanges of movement between Lewandowski, Müller and James causing the Schalke defense all types of problems.

Bayern take the lead on a set piece
So it is nearly impossible to press Bayern, but at least Schalke have the edge on set pieces, right? Last season, set pieces were an absolute specialty of Tedesco’s side. But in just four Bundesliga matches, they have already conceded three corner goals, as many as all of last year. Of course, Bayern led the Bundesliga with eleven goals scored from corners last season.

In the eighth minute we saw both of those trends continue thanks to a James headed goal from a set piece. Kimmich’s delivery and Goretzka’s run beat the near-post defending Embolo, and James was two steps ahead of former teammate Rudy to score in front of Salif Sané. The Senegalese giant was signed from Hannover due to his aerial prowess. He and Naldo finished first and second in aerial duel success with over 80% and were in the top five in attempts. So far, both have struggled mightily in defending set pieces. Though after the goal, Naldo had a decent attempt at the other end in the seventeenth minute.

Schalke continues to struggle in buildup
Schalke’s response to going behind was to turn up the press. It did lead to some turnovers by Alaba and Lewandowski, resulting in a couple of low-percentage shots by Caligiuri and Di Santo, the latter being the result of the only successful pass Schalke completed inside Bayern’s box. They were not however the results of building out of the back, as shown by the following image. 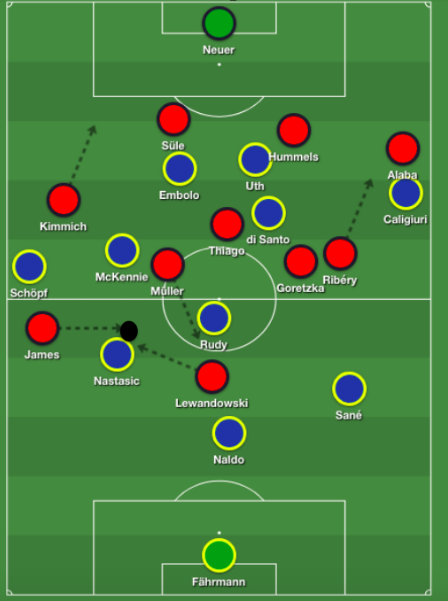 An example of Schalke’s build-up.

Matija Nastasić is in possession with relatively little pressure on him, as Müller, James and Lewandowski are all about ten yards away. James curves his run and blocks the pass towards Schöpf, while Müller closes down Rudy, the best passer of Schalke. Nastasić tries a long pass towards Mark Uth, who loses the aerial duel against Hummels.

Given the limitations of Naldo and Sané as passers, Nastasić was the best passing central defender for Schalke. That is faint praise, for the Serbian completed just 33 passes on the night, eight of which to Naldo and five to the goalkeeper Ralf Fährmann.

James and Alaba nearly add the second, Lewandowski does
Bayern were far from done after a strong start. After a great set-up by Lewandowski, James wasted a great one-on-one chance, because Fährmann made a superb save. The Schalke keeper also kept out a dangerous long range effort from Alaba, while the crossbar saved him later on.

James would quickly become the standout figure of the match, with his constant excellent movement. Starting out as a right-sided midfielder, he would switch with Thomas Müller in the center. His constant movement and positional switching made it very difficult for Rudy and Schalke to cover him and Tedesco had to make a tactical adjustment. The Schalke coach switched McKennie from the left and made di Santo his left central midfielder to match up against James and Müller. James somehow failed to score an almost unmissable chance on an open goal in the 50th minute.

Schalke’s best opportunity came from a set piece after the Colombian fouled McKennie. Embolo however missed an uncontested header. Tedesco turned up the press and brought on more playmaking with Nabil Bentaleb and more dribbling with Amine Harit, but Bayern killed the game off from a set piece.

A short corner from Kimmich to James led to the Colombian getting fouled in the box by Schöpf. Lewandowski converted the penalty, effectively killing the game in the 64th minute. Two goals behind, Schalke opened up more with Bentaleb going up alongside Harit, which mostly led to Bayern counterattacks. Chances by Müller, Goretzka, Serge Gnabry and Alaba could have added to Bayern’s lead, while Schalke only managed to add a couple late shots.

Takeaways
Bayern has won every one of its seven competitive matches on the season, conceding just two goals. They are already seem to be running away with the league, thanks in part to Dortmund, Wolfsburg and Gladbach faltering.

Niko Kovač has effectively rotated his side and thanks to the reliable passing of Thiago and the center backs, along with the incredible full back play of Kimmich and Alaba, Bayern withstood Schalke’s press. James’ contributions were massive in attack and encouraging for the future.

Schalke suffered their fourth consecutive loss, and while there were signs of improvement, such as Caligiuri’s energy and the improved pressing at times, Tedesco is still looking for the right setup. Problems with the buildup play, Rudy’s role in midfields and generating good shots are still an issue. Having to play a midweek fixture next week and four games in two weeks means there will likely be little time to change much in trainings, but at least the upcoming opponents – Freiburg, Mainz, Lokomotiv Moscow and Fortuna Düsseldorf –  seem like fairly manageable matchups. 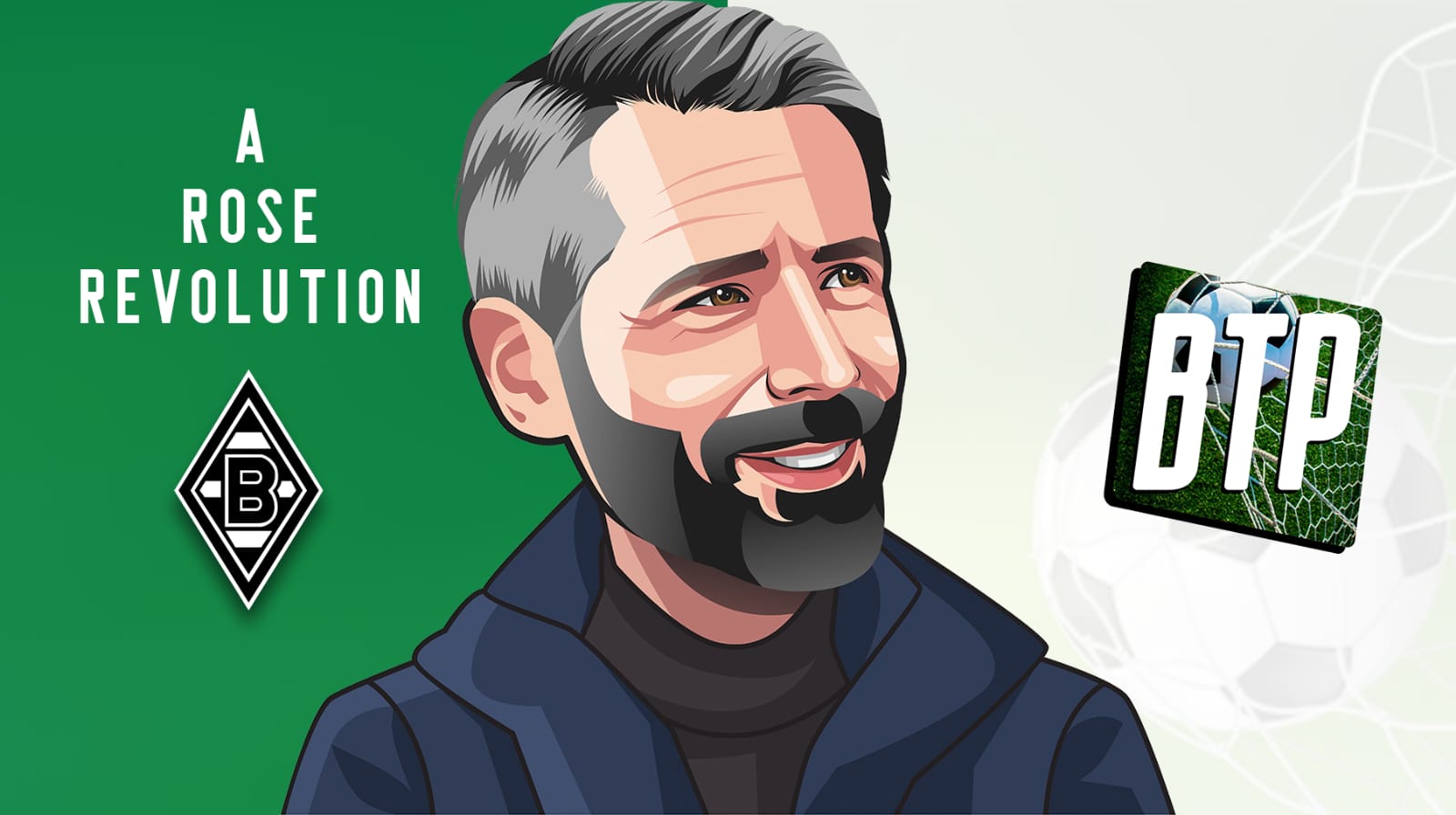 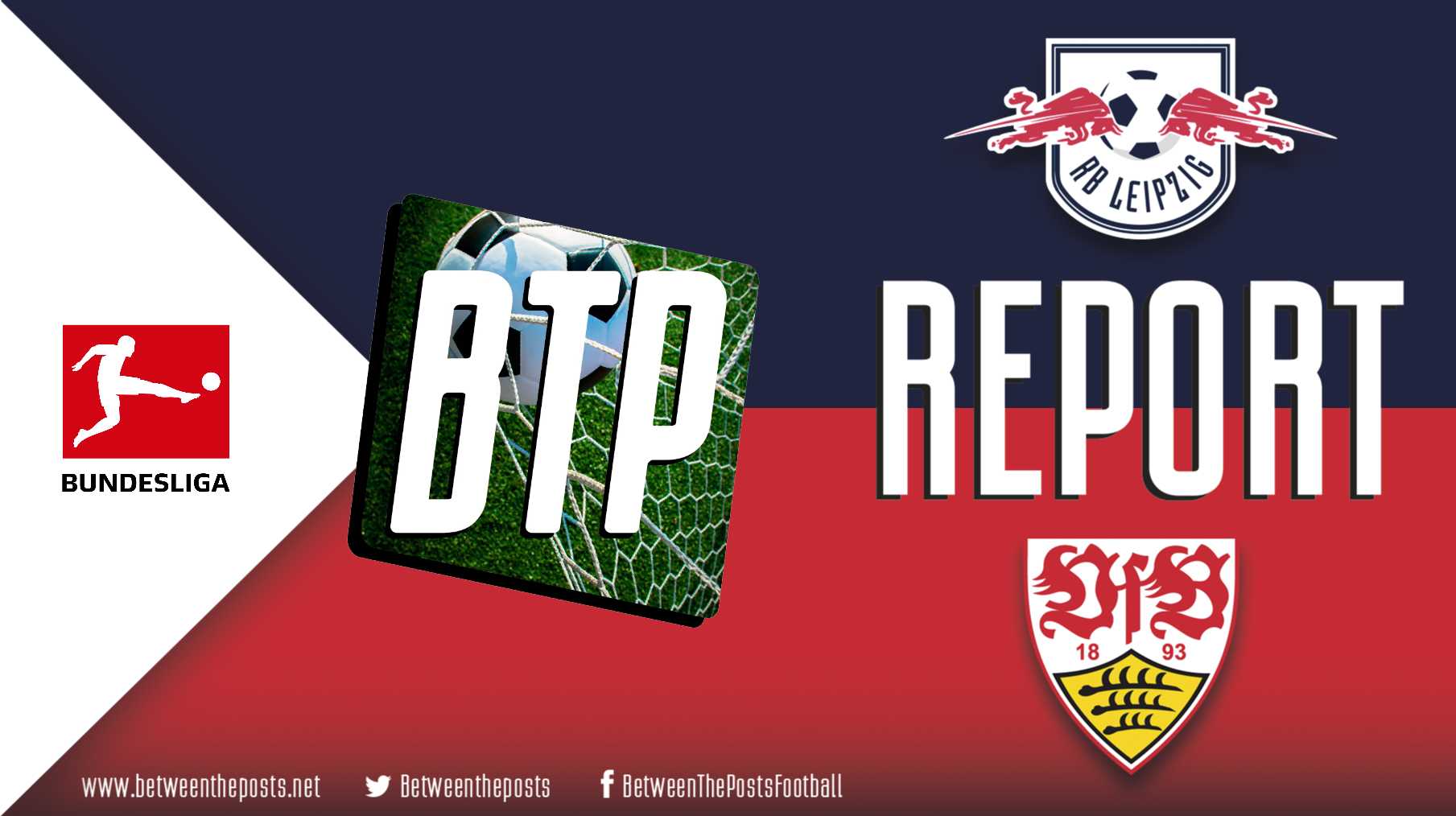