A match made up of small battles up, down and across the pitch, Mainz’s diamond formation was the catalyst for an interesting affair, albeit one that failed to create much excitement in attack. At least not until the very end.

Schalke appear to have found their feet under David Wagner; whether they can keep up with the standards their recent 3-0 and 5-1 victories suggest remains to be seen. With those results in mind, it was not a surprise to see the manager make just one alteration: bringing in Weston McKennie for Mark Uth, as he switched from a 4-2-3-1 setup to a 4-3-3 shape, as McKennie came into the side as a central midfielder.

Despite not reaping rewards in terms of results, as demonstrated by their horrendous run of form, Mainz manager Sandro Schwarz was given some reprieve during last week’s 2-1 victory over Hertha Berlin, meaning his team won their first match of the season, after losing the first three. Against Schalke, Schwarz played the same diamond system as usual, in addition to a completely unchanged starting eleven.

The good and the bad of Mainz’s intentions

The most successful part of Schwarz’s diamond against Schalke was best depicted in their high press, as his players were enabled to go toe-to-toe with each of their direct opponents. It made life incredibly difficult for Schalke when building out from the back, and that was the case throughout the match.

The high press was the best aspect of their game, however, and past that point, Mainz were a lot weaker. That, in part, was down to the lacking vertical compactness of their defensive shape. In a diamond formation, it is vitally important that you prevent the opponent from easily playing from one side to another. If a team allow for that to happen – as Arsenal demonstrated earlier this season – you can leave yourselves very stretched, which was the case because Jean-Paul Boëtius, Mainz’s number ten, was never getting back to either close in on Schalke’s attackers, or to merely prevent ground passes across the midfield. 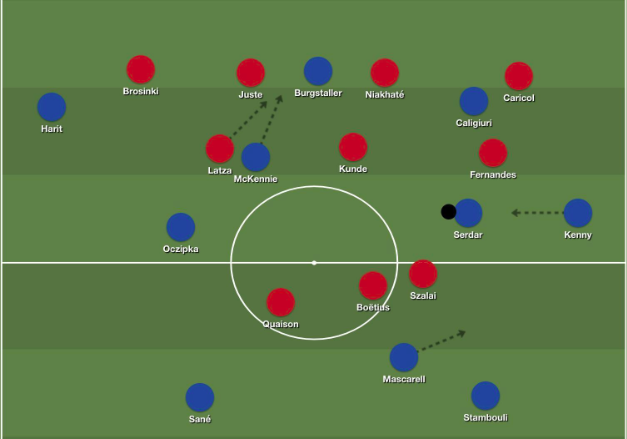 With Boëtius rarely opting to fall back into shape, Schalke had a lot of success getting from side-to-side. Typically, their wide plays – usually on the left side – consisted of Amine Harit holding the width and Bastian Oczipka and McKennie running and rotating inside of him to drag Mainz’s midfield further inwards, thus creating space in front, on the edge of the box.

Even in their natural shape, there were still a couple of problematic holes – which were also evident on the flipside – where the wide central midfielder, who would press wide onto the fullback, would leave the lane into the central midfielder on the side of the ball for Schalke open. And, with Boëtius already occupied by Omar Mascarell, it enabled the home side to receive freely in the middle and work it quickly across the pitch. This was the case down either side.

The structure down the right for Schalke arguably facilitated their left-sided dominance in the way Suat Serdar would drop deeper in line with Mascarell, and Burgstaller would provide a necessary target in the halfspaces If you divide the field in five vertical lanes, the halfspaces are the lanes that are not on the wing and not in the center. Because there is no touchline like on the wing, players have the freedom to go everywhere. But this zone often is not as well-defended as the very center. This makes it a very valuable offensive zone to play in and a lot of chances are created by passes or dribbles from the halfspace. when needed. And, with Daniel Caligiuri constantly narrow to begin with, it was possibly a way of tightening their counterpressing When a player is positioning himself between the opponent that has possession of the ball and another opponent, he is blocking the passing lane. When applied the right way, his ‘shadow’ is effectively taking the opponent in his back out of the game, because the pass can not be played.shape, whilst also providing necessary short links to the ball from either side to continue to connect play.

Putting aside their defensive difficulties, Mainz were arguably even more dysfunctional in their approach against Schalke’s 4-4-2 setup.

Wagner used midfielder McKennie to shift shapes, with him and Burgstaller rotating horizontal lines in their press and playing a classic game of two-versus-three. One would step out onto the ball-holder on their side, while the other would drop deeper to cover access into the unmarked holding midfielder, Pierre Kunde. 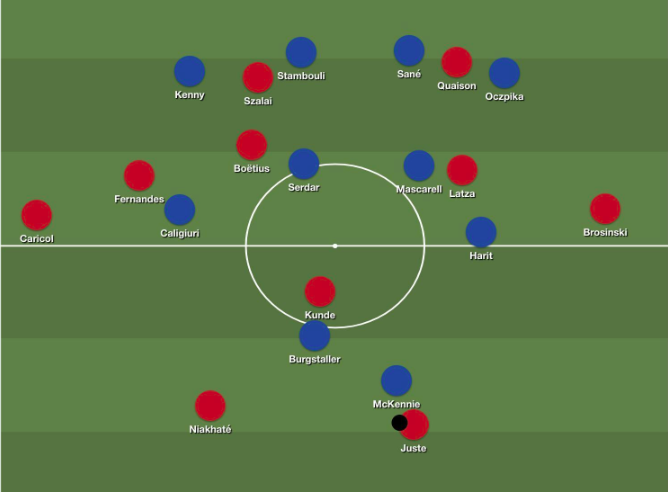 Getting past that two-versus-three press proved to be particularly challenging for Schalke, since Schwarz’s men looked out of ideas in terms of their support for the center-backs. The vertical gap between them and the midfielders and fullbacks was always far too big, meaning that only the fullbacks were occasionally accessible, and when they were, the Schalke defense had enough time to close down not only the fullback, but also the ensuing pass, which had to be played first-time for the recipient to avoid the onslaught of pressure.

This only began to improve when Edimilson Fernandes decided to start pushing wide into the left back position. Receiving shorter now, he could cut in, using his body to shield off pressure. Despite this, he was still short of options, since – even in relation to him – the distances were still too big. Having a ball-sided central midfielder, like Fernandes, certainly helped stretch Schalke, though. It left more space for the forwards to try and exploit the space between the lines. Tony Latza was often a recipient in these attacking mechanisms as he would consistently make darting runs across from the far-side and into the channels, either through the middle, or behind Ádám Szalai.

On one occasion in the first half, this worked through Boëtius’ run, which was intelligently left by Szalai to get him in possession down the inside left. What came of it was instant access into the box, plus an attempt at a cutback that was well defended.

Whereas the left side was a stronger point for Mainz, their right side was incredibly weak. That side was a beacon-less pit, one that Mainz right backDaniel Brosinski found impossible to defeat. The issue, here, unlike on the left, was that they had nobody willing to move closer to the ball, or to even run into depth.

Latza would often push back and away, hoping to rotate with Robin Quaison, but the timing and intensity of these rotations meant Brosinski had far too small a window of time and space to find the new option. Even worse was the fact that Latza ended up holding an incredibly passive position, when a run into depth out wide could have provided a valuable third option, past the drawn out fullback. 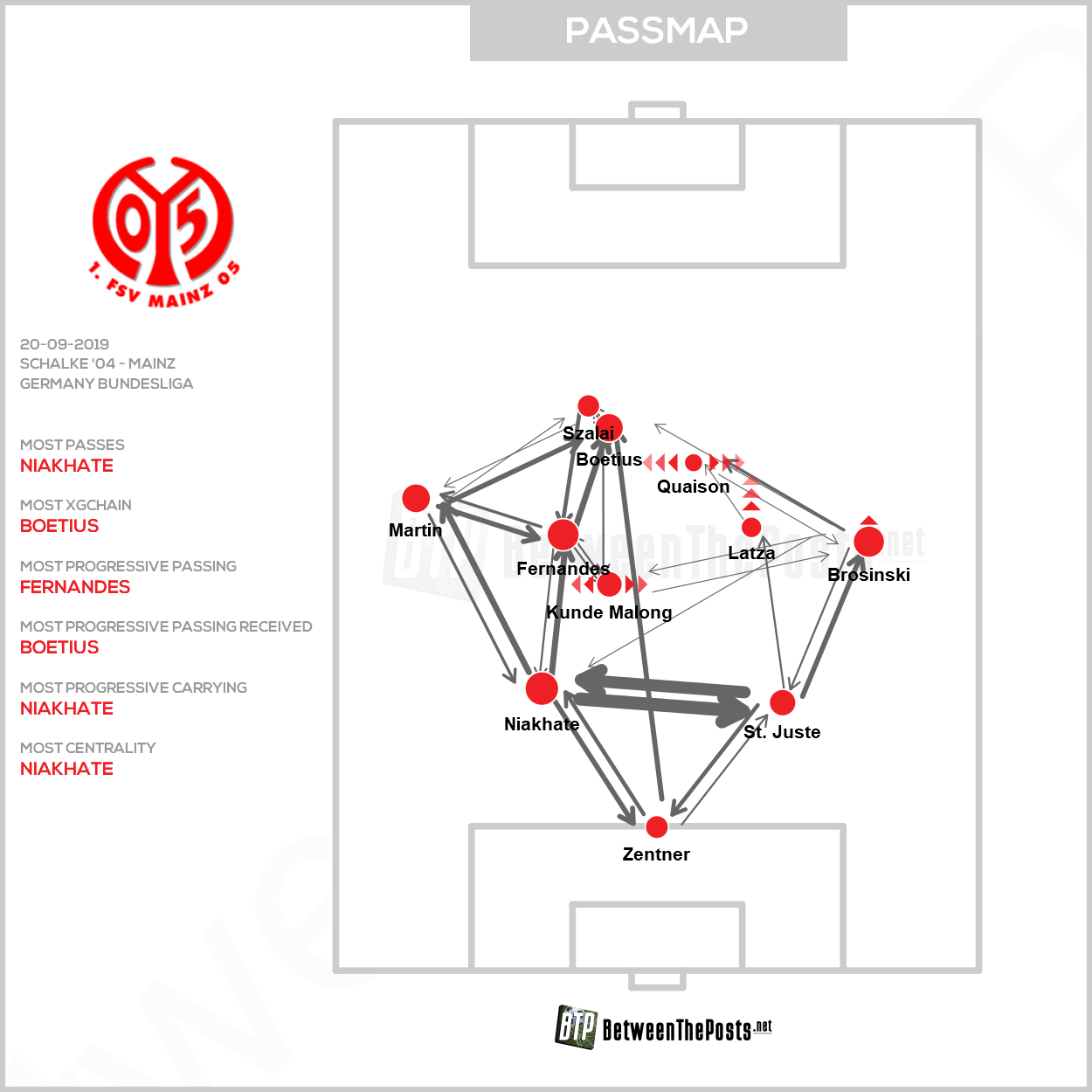 Following thirty-five minutes of unthreatening possession from both sides, the hosts finally made the breakthrough. Unsurprisingly, the same issues that had been cause for warning for the away side were the source of the problem, here.

Shifted easily across the face of midfield to the left, where Harit held it wide, McKennie’s run after laying it off dragged deep their right-sided central midfielder, enabling Harit to cut in and execute a brilliant slide ball into the path of Serdar’s late, late diagonal run across. The overload When one team has more players in a certain area or zone than the other team. left him with just enough time and space to get his shot away, which he did, emphatically.

For the rest of the half, there was a more frantic feel to Mainz’s play, something that carried over in the second half. Schalke were feeding off their mistakes, whilst the visitors still were yet to come up with anything incisive. Every time Schwarz’s side counterattacked, they were always letting themselves down in terms of choices – playing to the wrong player, playing it too far behind or ahead, overhitting or under-hitting the ball, to sum up a few mistakes.

There was a bit more precision and enthusiasm, at least, when Alexandru Maxim, Bote Baku and Karim Onisiwo came on. Same shape and tactics, but to some extent, it reinvigorated Mainz. It did not, however, make them any less susceptible to Schalke’s growing counterattacking threat, as their rest defense continued to shrink, leaving their defense far too isolated, and yet Wagner’s men never found that ‘right’ pass or that clinical edge to kill the game off.

What happens in the game of football when you do not take your chances? You get punished.

Out of absolutely nothing, Mainz managed to scrap their way to the width of the box down the left, where Boëtius had enough room to squeeze it short into Onisiwo. The striker opened his body slightly, still with his back to goal, and whipped it ferociously into the far, top corner. An audacious individual effort suddenly had Schwarz’s side back level.

Mainz were able to hold their own and defended well after their equalizer. Not that they were particularly strong defensively after grabbing that goal, it was more down to Schalke lacking quality.

That was, until Harit stepped up to the plate. They took their time to respond but the Moroccan stunned us all when he jinxed inside from the right, showing his superb dribbling ability. With enough space to burst towards the box, he then had enough room to load up a shot with the outside of his boot, that he struck so cleanly, so sharply, so accurately, into the back of the net. Schalke took the lead with injury time looming; there was simply not enough time for Mainz to recover. 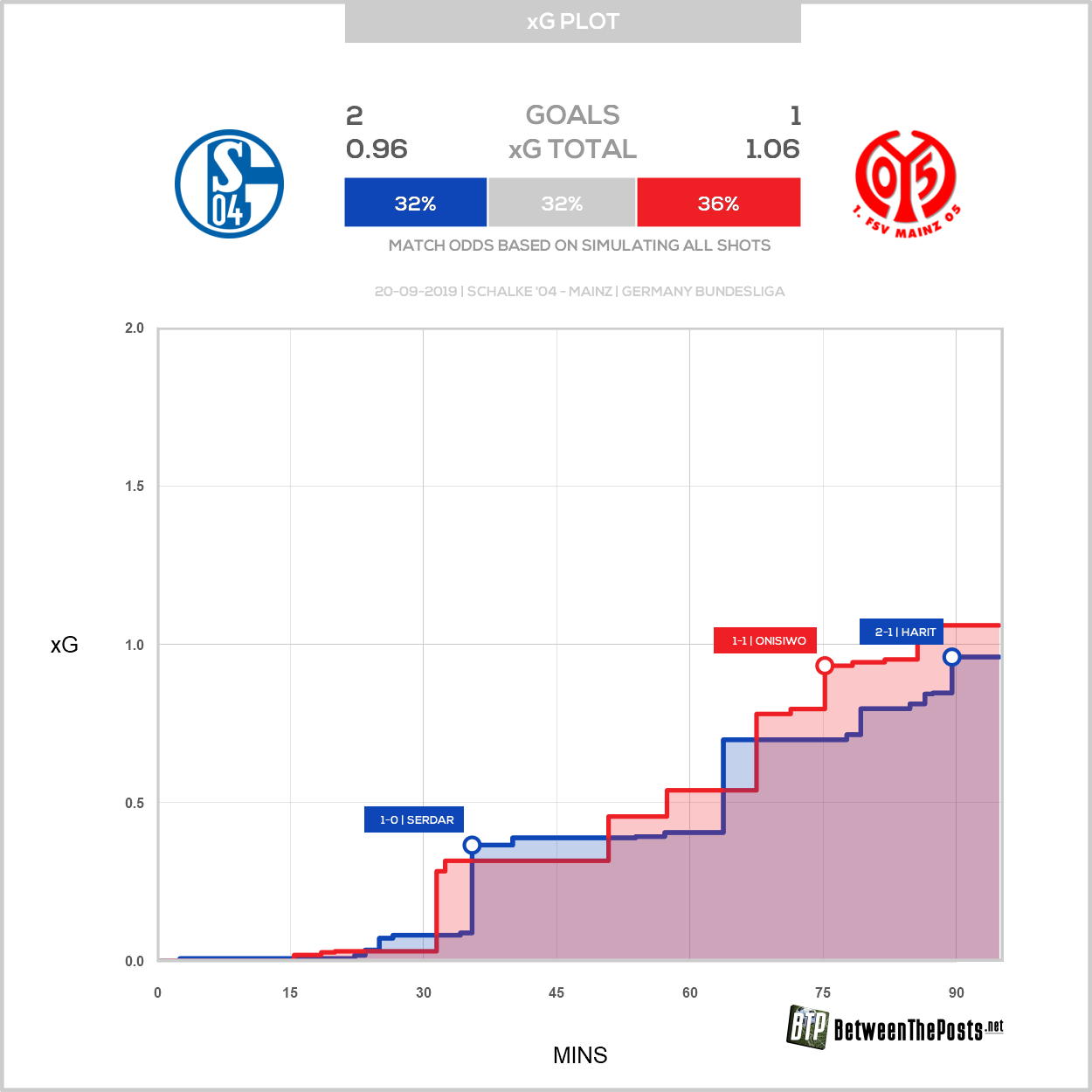 This, for the most part, seemed to be a bit of a non-event until two moments of magic saved the game. Schalke just about edged it, but they hardly covered themselves in glory, nor will this performance count as a positive in terms of form or style of play. Wagner will not care too much about that, though, as his side head to Leipzig next week with three consecutive wins under their belt.

And, although you can argue the closeness of this contest was a positive for Mainz, their performance was neither here nor there. Marked improvement is still necessary if they want to dig themselves out of this ever-growing hole, and their home match against Wolfsburg up next might be the time to do it.

Use the arrows to scroll through all plots. 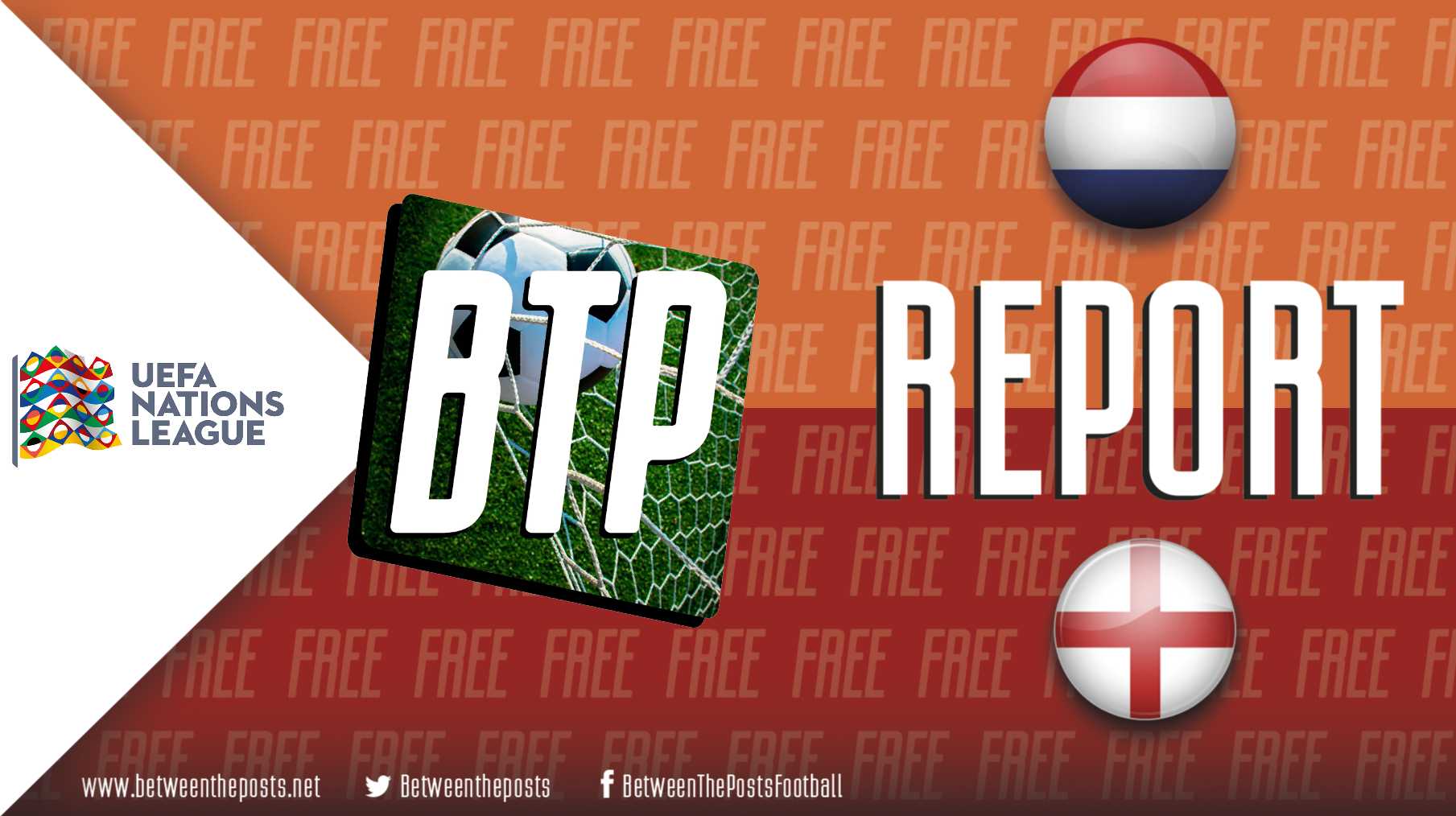