This match was all about marginal gains. Both Stade Rennais and Lille OSC set up in 4-4-2 formations that were largely enough to dim each other’s attacking threats. Small tactical adjustments were thus key to improving attacking successes, since cracks gradually started to seep through.

Julian Stéphan’s Rennes have boasted a more-than-decent start to the 2019/20 season, as they locked horns with last season’s runners-up Lille. With Paris Saint-Germain still yet to play their away match against Olympique Lyonnais, both sides were in prime positions to temporarily move to the top of the table, if not just level in Lille’s case.

The home side’s manager named a changed eleven to the one that was held here, at the Roazhon Park, by Celtic in the UEFA Europa League on Thursday. Jérémy Gélin replaced Damien da Silva in the center of defense and in midfield, Benjamin Bourigeaud and sixteen-year-old sensation Eduardo Cavaminga were the replacements for Clément Grenier and Jonas Martin at the heart of the midfield. Raphinha dropped back from his striking position to a wide role with Romain Del Castillo thus partnering M’Baye Niang up top instead.

Christophe Galtier’s side – who have already experienced some topsy-turvy form with three wins all followed by losses immediately after – suffered even more so in their 3-0 away defeat at Ajax in their UEFA Champions League group opener. Galtier named just two changes from the lineup that started in Amsterdam, with Luiz Araújo getting the nod wide on the right over Renato Sanches, and Reinildo Mandava coming in at left back ahead of Domagoj Bradarić.

The way Stéphan’s side set up enabled their opponents to have time on the ball. Although this was less so the case when there was a straight up two-versus-two on the last line, Benjamin André constantly dropping right of the center-backs to create a back-three helped ease this pressure.

The away side then found themselves a 3-5-2 shape, which would occasionally move into a 3-4-3 if and when Jonathan Ikoné decided to drop alongside Boubakary Soumaré in the second line.

The problem for the visitors was that the mechanisms to recycle play and stretch open this flat midfield line of Rennes’ were not there. Particularly since André dropped through the right halfspace, If you divide the field in five vertical lanes, the halfspaces are the lanes that are not on the wing and not in the center. Because there is no touchline like on the wing, players have the freedom to go everywhere. But this zone often is not as well-defended as the very center. This makes it a very valuable offensive zone to play in and a lot of chances are created by passes or dribbles from the halfspace. there was a pressure on Araújo to drop in tandem to provide a further option, but he was quite poor at knowing how to, let alone when to. As a result, play stalled and, whether they went to the far-side or not, they often resorted to simply going long into Victor Osimhen up top. There were moments, however, when Lille found the right way to unlock space, even if they were sporadic and seemingly off-the-cuff. 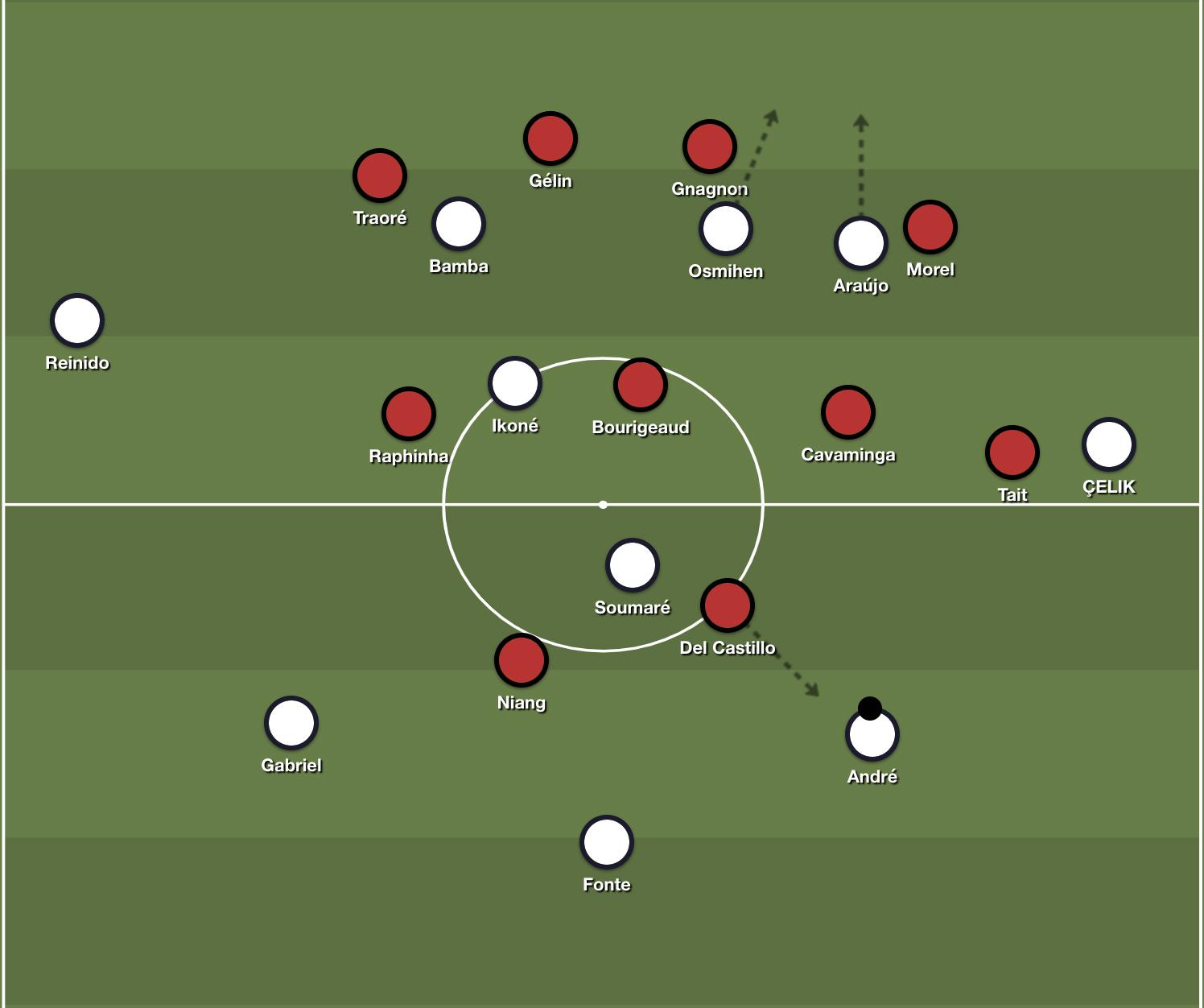 Lille’s rotational back three in possession.

In the fifteenth minute, there was a good example of Lille’s midfield shifting into a three as André made himself aware of Ikoné’s position in the ball-far halfspace. By creating this flat three, the fullback could then exchange the ball with the overloading midfielder – Soumaré – inside to beat the first challenge. Then, with Rennes’ defensive midfielders drawn across, Reinildo laid it back into André who located Ikoné still standing free in that same right halfspace. With a clever flick around the corner and drag-back return from Osimhen, Ikoné was able to afford himself a shooting chance on the edge of the box, which was well stopped.

The next chance, though, also helped to shine a light on some issues Rennes faced in defending after turnovers. Mostly coming down the right side, Rennes’ third-man runs A passing combination between two players, while a third player simultaneously makes a run, usually in behind the opponent’s defensive line. After the initial combination, the ball is quickly played in depth for the third player to run onto. in buildups featured right-back Hamari Traoré, who would look to play directly into the feet of the nearby striker that would drop through the halfspace. With the defensive midfielder moving extremely close, they could not only draw forward Lille’s near-sided holding midfielder to create more space in which the striker could receive in, but also be in a position to cover the fullback’s impending run, since what would usually follow these passes was an instant underlap.

There were two ways Rennes aimed to utilize their striker holding up the ball: either by having him lay it short into the wide-midfielder, who could then feed it further inside to the fullback’s third-man run, or, by having the wide-midfielder collect it from his feet and take it inside, as it would see him dodge his marker completely, before the Traoré could then run the flank. 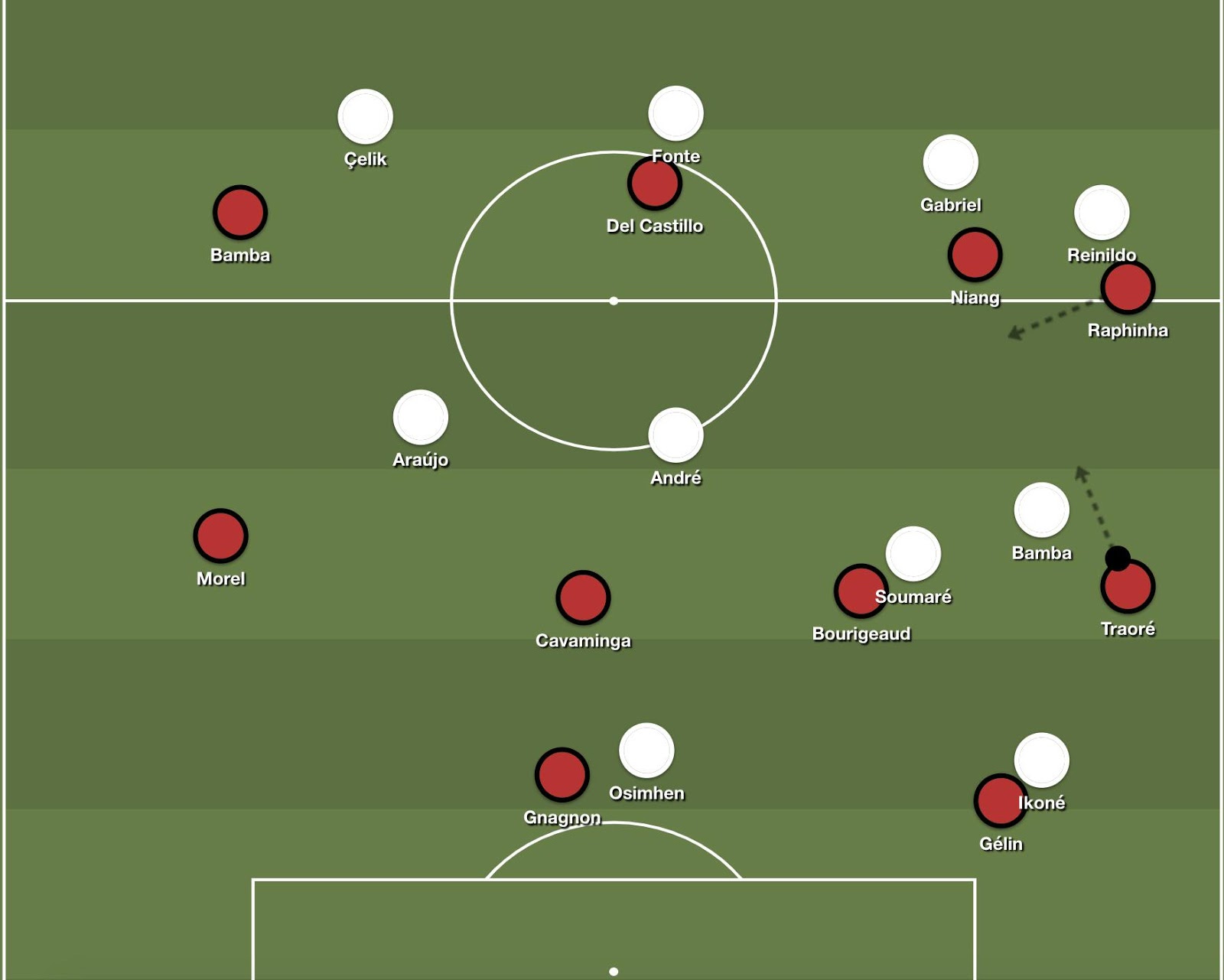 One way Rennes looked to use the wide areas to play off of Niang.

Whilst the intention and execution, to an extent, was pleasing on the eye and nearly effective, it was always just short of being successful, usually due to a loose touch. Even when they managed to get up the pitch – or simply when they had the time and space to find a pass – Rennes were guilty of either not trying to exploit the flanks, or not playing a good enough pass to do so as their attackers constantly made runs in behind Lille’s highly-positioned fullbacks.

Where the main issue comes is in Rennes’ counterpress. In particular, the positions Bourigeaud and left midfielder Flavien Tait took up. As could be seen in the 32nd minute, when Bourigeaud was the one to push on from a temporary wide-right-center-back position to attempt, and fail, to play into a wide run, his side were left too stretched. The strikers were too bunched and high up without having dropped to pull open the space for the wide-midfielder’s run. Then, on the far-side, Tait was way too wide, to the point where it was meaningless; his positioning left that left halfspace open again, as Lille’s two midfielders were afforded free time and space with the ball. Just after Ikoné’s movement deep to attract attention centrally, Soumaré comfortably found Araújo past Tait, where the winger then drove in through a narrow gap to get a shot off, which saw its rebound effort by Osimhen blocked.

Lille snatch a lead straight after the restart

It took no more than sixty seconds of second half football to be played before the visitors broke the deadlock. As the ball retreated back to the center-backs, the away side’s two strikers were keen to force the issue, and so they did after Joris Gnagnon’s hospital ball across to Gélin was dispossessed – which was the wrong choice of pass on just about every level imaginable. Osimhen capitalized by driving towards the box and playing it across for Ikoné to tap in. And, given their first half display, it was hardly unwarranted.

With the onus now on Stéphan’s side to work their own openings, we saw them carry out a similar move to Lille, with Bourigeaud frequently taking up the same position André did. The difference here was in the opposition’s defense of it – Galtier’s side much preferred to press up onto the ‘third defender’, even if it temporarily left access into the wide man open. The intensity was there to force quick decisions and mistakes, which came aplenty as Rennes never looked assured in how exactly they wanted to move the ball in these specific instances. Even with some brilliant positional distribution and rotations, it was not quite coming to the fore in those moments.

Past the hour mark and little had changed. Rennes were now all about stretching the play, which was becoming a lot easier as Osimhen and Ikoné struggled to cover the same ground, subsequently enabling Rennes to pin them back a bit more. The heavily-pressured back-three was now a viable way of creating sufficient links across

Stéphan looked to capitalize on this in the way he tweaked his setup after bringing on Adrien Hunou and James Léa Siliki. The positions in the attacking line were now slightly different. Whereas before, the very distant wide-midfielder created problems rather than solutions, they were now very narrow in with the center-forwards, whilst the ball-sided wide-midfielder continued to provide width ahead of the ball. As was evident in the sixty-eighth minute, Hunou’s added energy finally saw Rennes properly exploit the channel behind one of Lille’s fullbacks. As he burst forward into a good crossing position, he cut it back, only for Niang’s shot to be crucially blocked.

Then, a minute later, the lacking intensity in Lille’s entire shape allowed for the easiest switch of play out to the right side. Without the time or energy to get back in for the cross, Hunou’s overloading position next to the strikers in the middle elected him to be the all-important third man; the man to head into the near corner and grab an equalizer.

With twenty minutes or so to go, you would have thought the game might have opened up a bit, but both teams within their blocks were still compact and intense enough to resist any more pressure. And so, it finished 1-1.

Lille’s first draw of the season re-emphasized why they are not just a one-trick pony after last year’s huge success. Going to Rennes and putting up a strong performance is no mean feat these days.

And, whilst it meant neither side went to the top, they are both in very strong positions as Rennes head into a run of three straight away games, which include trips to Nantes, Marseille and then Rome to face Lazio. Lille’s furthest trip is down to the South of France in Nice, which is sandwiched by home clashes against Strasbourg and Chelsea.

Match  plots will be added as soon as possible. 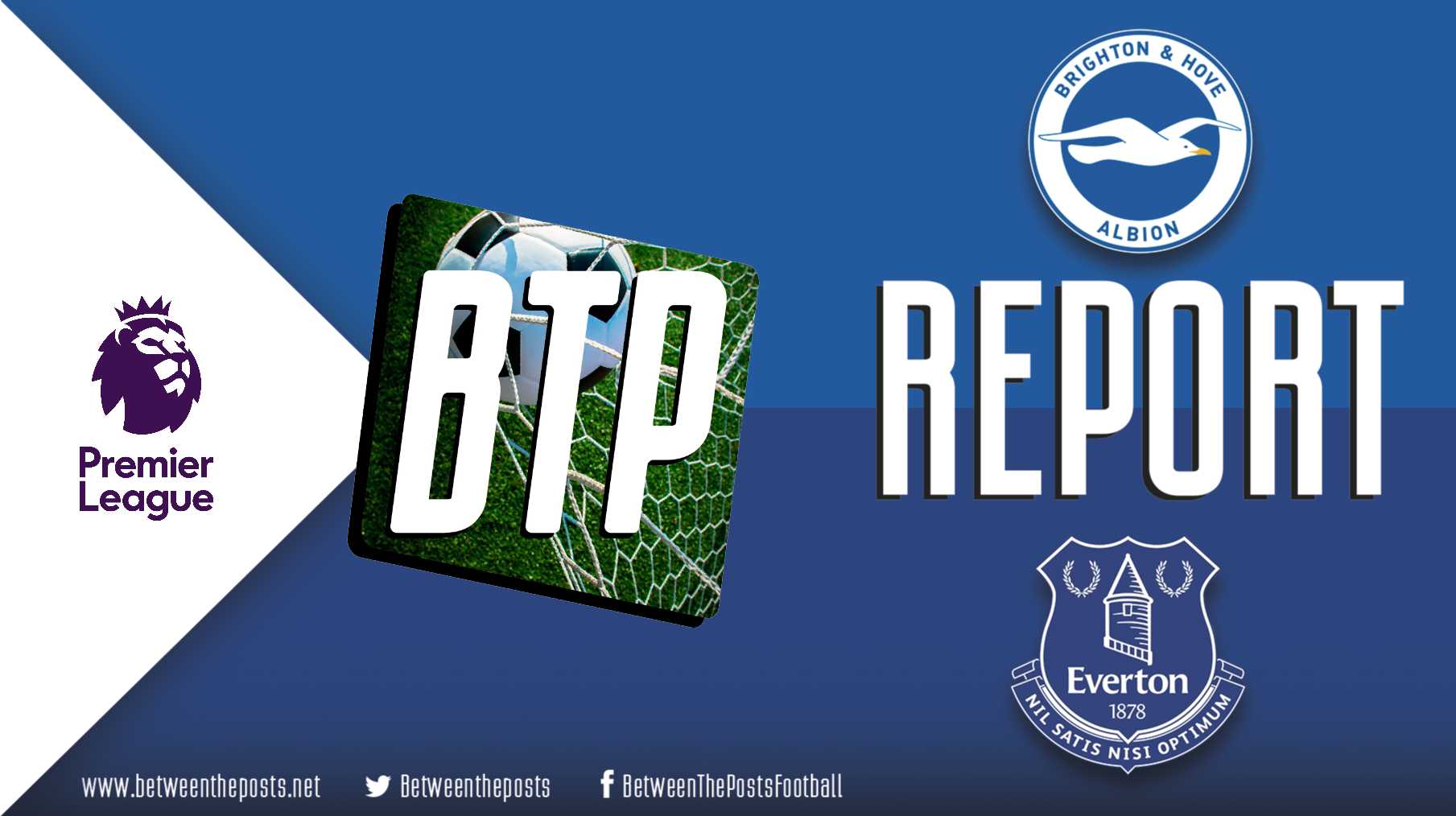