It is fair to say that Stade Rennais against Olympique Lyonnais is one of the most intriguing clashes in Ligue 1 this weekend. Both are interesting sides to watch, with innovative and free-flowing styles of play, but severely contrasting levels of organization. This showed in today’s game, as Rennes operated from a well-drilled and compact 4-4-2 formation, while Lyon let their individual talents fly from a fluid 4-4-2 diamond system. In the end, the superior individual talent prevailed as Lyon took all three points with a very late goal.

Julian Stéphan is making quite a name for himself. In his first stint as manager he has turned things around at Rennes.  After struggling in the first half of the season, under his management they rose from a bleak mid table position to having realistic chances of a second consecutive qualification for European football. In their Europa League campaign this season, they have beaten Quique Setién’s excellent Real Betis in the first knockout round. Later, they went out against Arsenal, after seeing a two-goal deficit overturned in the away leg.

Chasing for the title has always seemed unrealistic for Lyon now, as Paris Saint-Germain is also playing in Ligue 1. Prior to the season, Lyon were expected to qualify directly for next season’s Champions League, but going into the game they were still four points off Lille in second place. A win at the Roazhon Park would push them closer to their expectation at the start of the season. Some extra spice going into this match is provided by the semi final of the French Cup next Tuesday, when Lyon plays… Rennes. 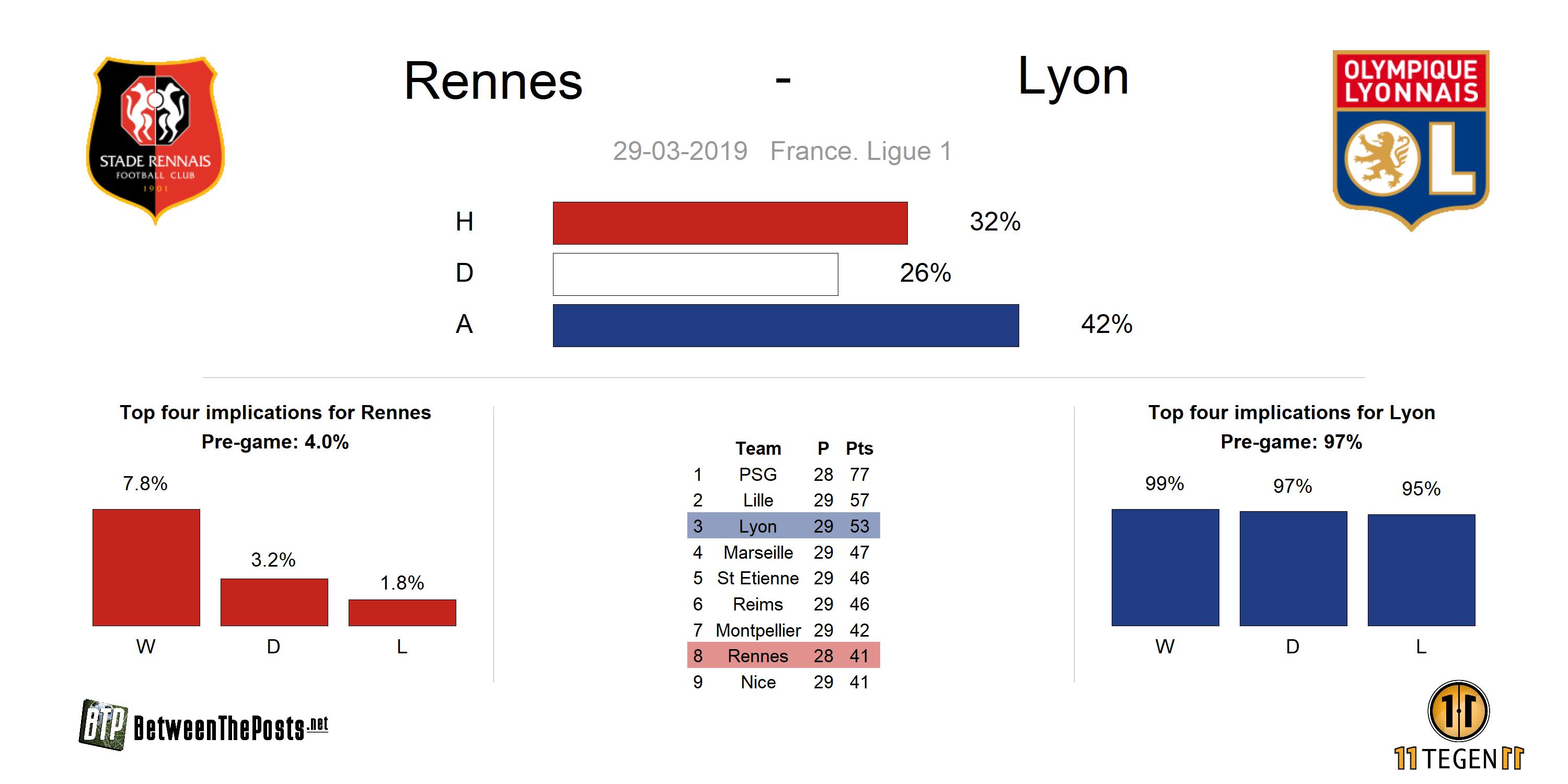 Génésio opted not to rest anyone and included all of his key players in his 4-4-2 diamond formation. Portuguese goalkeeper Anthony Lopes returned in goal after missing the win against Montpellier. The back four consisted of former Manchester United and Manchester City players Rafael and Jason Denayer. They paired up with Brazilian defender Marcelo and Léo Dubois. Lucas Tousart continued to act as a shield in front of the defense. French prospects Houssem Aouar and Tanguy Ndombélé played in central midfield behind attacking midfielder Nabil Fekir. Lyon’s formation allowed them to play both Memphis Depay and Moussa Dembélé as strikers.

Right from the start, Lyon showed their intentions by adopting a high-tempo pressing game. They set out to win the ball as fast as possible and exploit the spaces between Rennes’ defensive line and midfield. The strikers and attacking midfielder would each follow an opposition player, opting to leave the ball-carrier in a free space.

The aim was to suffocate the ball-carrier’s passing options, forcing him to play a long ball up front. When this happened, Denayer and Marcelo’s aerial superiority allowed to clear the ball before it reached the final third. This tactic proved efficient, as the away side created early chances off Rennes’ turnovers.

The home side approached the game quite slowly. Their priority was clearly to build a solid defensive structure to deal with Lyon’s attacking superiority. Rennes set themselves up in a flat 4-4-2 shape with two defensive layers of four. This style of play is familiar to how Atlético Madrid play under Simeone.

Ben Arfa and Hunou were instructed to minimize the threat from the single pivot Tousart. At the same time, Rennes’ central midfielders were tasked with limiting the passing threat of Ndombélé and Aouar. Well aware of Ndombélé’s press-resistance, This is an increasingly important trait in midfielders and defenders, particularly in teams playing a possession style of play. It refers to the player, or team, under pressure being able to keep possession and even bring the ball further up the pitch through dribbling or passing. they also took care not to fall for his dribbling skills as these could create dangerous attacks. 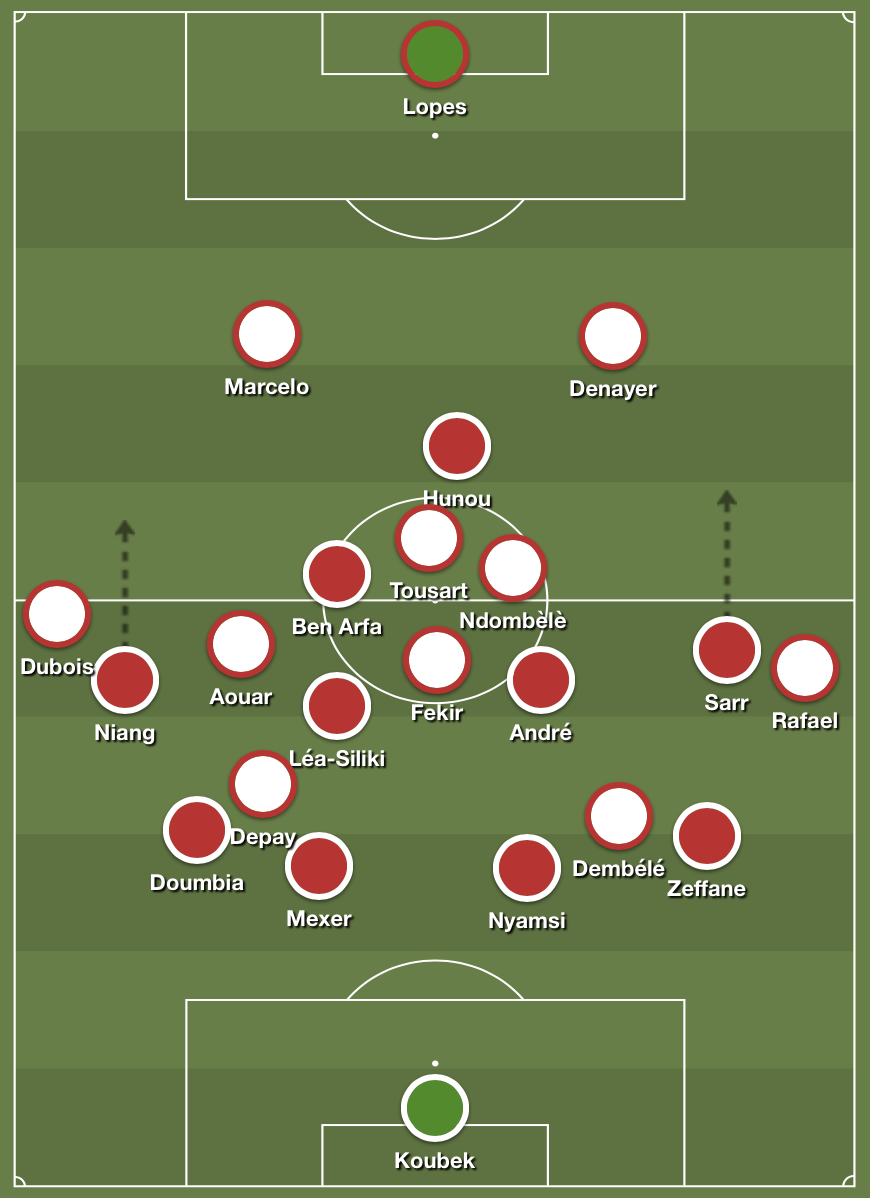 Another thing that Stéphan instructed his side to do is to overload the middle area. He instructed his fullbacks to tuck inside in order to prevent Fekir from moving around and create spaces in between the center-back and fullback. But, as always with choices in football tactics, this came with a downside. In this case, Lyon used the spaces out wide for Dubois and Rafael to overlap. When a wide player, most of the times a wing-back, runs outside to fill in the space left by a winger going inside with or without the ball, this is called overlapping. Against a compact Rennes defense, Lyon relied heavily on this method to build their attacks in the first half.

Offensively, Rennes tended to build from the back and utilize Nyamsi and Mexer’s passing ability. They usually played long balls into the runs of Niang and Sarr, bypassing Lyon’s pressing. Meanwhile, the remaining midfielders would slowly overload the opposite half and create more passing options for the ball-carrier.

The central areas often proved congested, so Rennes frequently moved the ball out wide, usually to the right-hand side occupied by Zeffane. When the Algerian received the ball, he could either make a cross or cut inside. Usually he chose the first option, well aware of the physicality disadvantage that Rennes’ offensive players had against Lyon’s defenders. Rennes were also happy to wait for spaces to open up by circulating the ball outside of the box. However, with Lyon’s defense set in place, this only resulted in long shots. 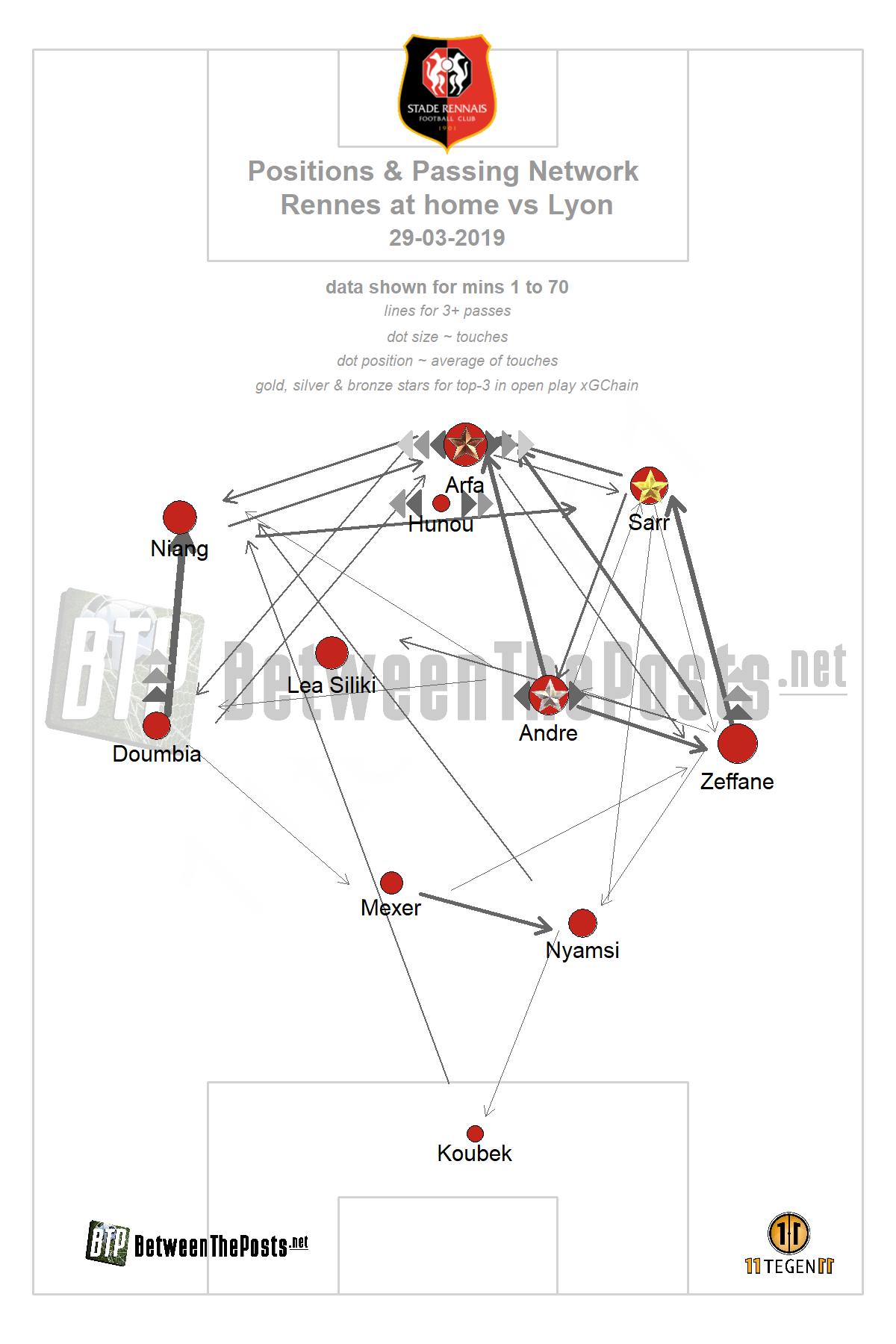 Playing against a 4-4-2 diamond formation, Rennes’ ball progression was understandably mostly along the flanks.

The second half provided a similar scenario. Lyon continued to attack while Rennes remained compact. Both teams created some low qualify chances on an opening goal, but failed to create any significant scoring opportunities.

Past the midway point of the second half, Génésio made two changes that went on to have a significant impact on the proceedings. Marvin Terrier and Bertrand Traoré were subbed on for Dembélé and Depay. Apart from introducing fresh legs up front, the aim was probably to utilize Traoré’s pace to disrupt Rennes’ defensive line, while Terrier’s intelligent movement could help them to create chances.

Génésio changes soon proved very effective. Rennes’ defensive line were left exposed as Mexer repeatedly stepped out of the line to deal with Traoré. As a result, Lyon capitalized on the new-found space to create chances.

Lyon first came close to the opening goal when Marcelo’s header was denied by Jérémy Gelin. Then, in the 84th minute, it was Rennes’ time, as Hunou only just missed the target pouncing on a scuffed shot by Sarr. Just one minute later, Lyon finally got what they wanted with a goal that neatly summed up Lyon’s stronger points of the game.

After picking up the ball in the opposition half, Ndombélé  dribbled forward and shook off his marker Gelin. Subsequently, Mexer stepped out of the defensive to close him down. Ndombélé kept his composure on the dribble and passed the ball to Traoré, who had attracted the attention of Doumbia. This, in turn, left Dubois unmarked during his run up in the wide space on the right flank. Dubois’ low cutback found Terrier and the former Lille man easily scored the opening goal.

With such a late game-winning goal, one could say Lyon were lucky to get three points. To some degree this is probably true, but by adopting a high-tempo pressing game and exploiting the weak spots in their opponent’s defensive setup, Lyon came out with the three points. Génésio’s aim of direct Champions League qualification got a boost as a win at Rennes is hard to come by these days.

For Rennes, all is not lost with this result. They can take comfort in frustrating one of the league’s best offenses for most of the night, although the dagger of the late goal will have hurt them. Rennes will rely heavily on the individual talent of Niang, Ben Arfa and Sarr, but there are worse names to depend upon. This match will also be a great preparation for manager Stéphan before they travel to Lyon for the Cup semi final on Tuesday. 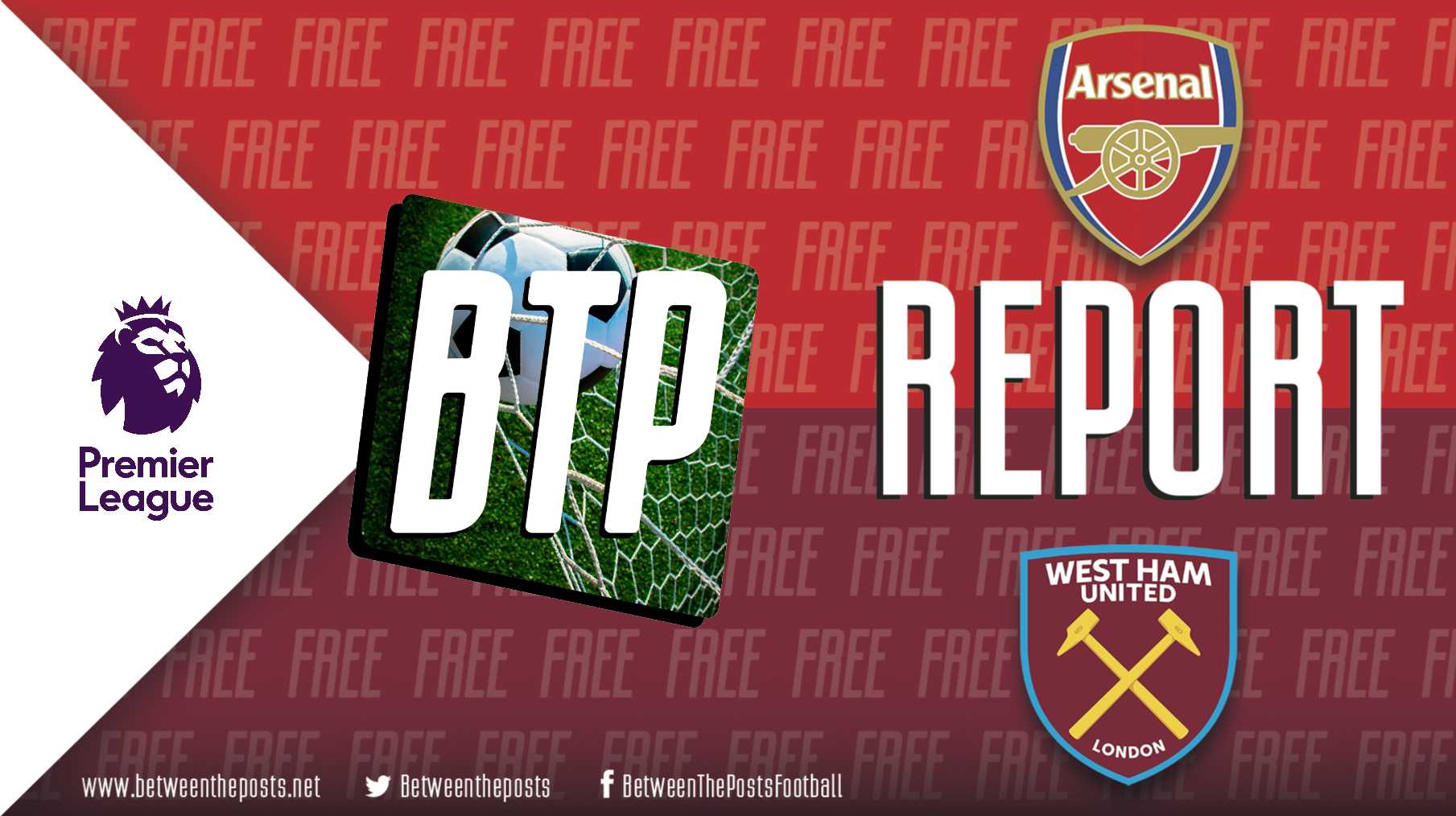