The rust accumulated from the long layoff was clear to see in Bayern’s play, as the midfielders failed to connect in the usual manner and the rotations on the wing seemed delayed and disjointed. On their part, Union Berlin displayed an impressive resolve in keeping Bayern from the goal, as they pressed with intent from the start and defended well for the majority of the match.

Union Berlin were led by assistant coach Markus Hoffman, rather than manager Urs Fischer, as the latter had flown back to Switzerland to tend to personal matters. However, the absence of the manager did not have too much impact on the side, as Union would go on to showcase their impressive defensive organization against the league leaders.

Union made four changes from the side that faced Freiburg prior to the lockdown, with Florian Hübner replacing Marvin Friedrich in defense, Grischa Prömel coming in from Christian Gentner in central midfield and Anthony Ujah and Marcus Ingvartsen coming in for Sebastian Andersson and Yunus Mallı respectively in attack. Union retained the 3-4-3 shape that has become their weapon of choice in the Bundesliga, relying as it does on the excellent provided by wing-backs Christopher Lenz and captain Christopher Trimmel to the strikers.

On the other hand, newly appointed permanent manager Hansi Flick had a full squad to pick from, but the German elected not to disturb a working formula and went with the trusty 4-2-3-1 shape that Bayern have dominated with. Alphonso Davies, David Alaba, Jérôme Boateng and Benjamin Pavard made up the defense, with Thiago and Joshua Kimmich retaining their places as the team’s midfielder controllers. In front of was the trio of Serge Gnabry, Leon Goretzka and Thomas Müller, who supported perpetually red-hot striker Robert Lewandowski.

Bayern spent the first fifteen minutes trying to reacclimatize to the matchday conditions, circulating the ball between the defenders and the midfielders to establish a measure of control before going forward and opening themselves to the risks of a counterattack. However, they nearly paid for this caution as Ujah and Ingvartsen pounced on loose passes from Alaba and Davies, forcing goalkeeper Manuel Neuer into an early intervention to prevent a shock opener for the home side.

This became a recurring theme for the home side. They preferred to keep the ball in the air and attack through chipped passes from the midfielders or long kicks from goalkeeper Rafał Gikiewicz. However, Union were not able to generate too many opportunities through this mode as Bayern defended competently in the air and intercepted passes on the ground. 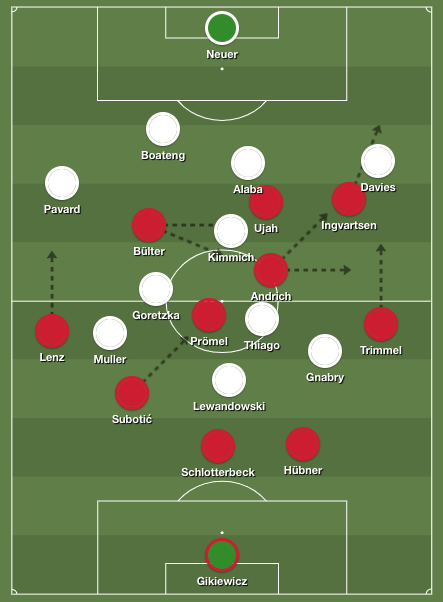 Union’s offensive setup. There was a clear right-sided emphasis when attacking, as Union tried to regain the ball by surrounding the Bayern player in possession.

Apart from this early scare, the first half proceeded in the usual manner, albeit at a slower pace, as Union defended intelligently to prevent forward forays from Bayern’s midfielders. With the visitors building up with three players – Kimmich dropping between Boateng and Alaba – Union pressed in a man-oriented fashion, with Ujah covering Kimmich, wingers Marius Bülter and Ingvartsen covering the wide center-backs and Prömel pressing Thiago.

This prevented Bayern from playing any penetrative passes through the middle, and the usual solution to this was to pass the ball out wide to either Pavard or Davies. However, Union’s medium block A medium block refers to a team that retreats in their own half out of possession, generally only disrupting their opponents some way into their own half. shifted towards the side of the ball the moment the pass was made to the wings, in a bid to regain possession and launch vertical passes into the channels for the strikers. Though they were unable to regain the ball, Union’s defensive organization ensured that the ball was repeatedly passed back to the center-backs, which the home side was happy to accept given the alternative.

Bayern show flickers of past form

Despite the relative difficulty faced by Bayern in generating opportunities, there were flashes of the side that had dominated prior to the lockdown, as the left-side wing rotations between Alaba, Davies and Gnabry remained as threatening as ever. Bayern were most threatening on the left, in situations where Davies burst forward on the wing following Gnabry’s positioning in the left halfspace.  If you divide the field in five vertical lanes, the halfspaces are the lanes that are not on the wing and not in the center. Because there is no touchline like on the wing, players have the freedom to go everywhere. But this zone often is not as well-defended as the very center. This makes it a very valuable offensive zone to play in and a lot of chances are created by passes or dribbles from the halfspace.

Bayern looked to have broken the deadlock early on, following a close-range header from Müller, but the goal was chalked out for offside. However, the visitors would end up capturing the lead before half-time, as Lewandowski slotted home a penalty after Union center-back Neven Subotić fouled Goretzka five minutes before the break.

The second half began in patchy form; both sides unwilling to back down from challenges and the rhythm and fluidity of Bayern waned initially before resurfacing later as Union tired from their defensive effort. Union also shifted to a 4-4-2 shape off the ball as tired legs began to show, and they were pushed back by a Bayern side that was in the ascendancy for most of the second half.

Whereas Bayern had usually attacked through Davies in the first half, the focus shifted to Müller and Pavard on the right for the majority of the second half. With Goretzka alternating between going ahead and dropping back depending on Thiago’s position, Bayern always had numbers in depth when attacking from the right. Pavard would move inside when Müller received the ball out wide; and, the presence of Goretzka, Lewandowski and Gnabry in the center meant Union had to struggle to fill the gaps that were beginning to open up in the middle. 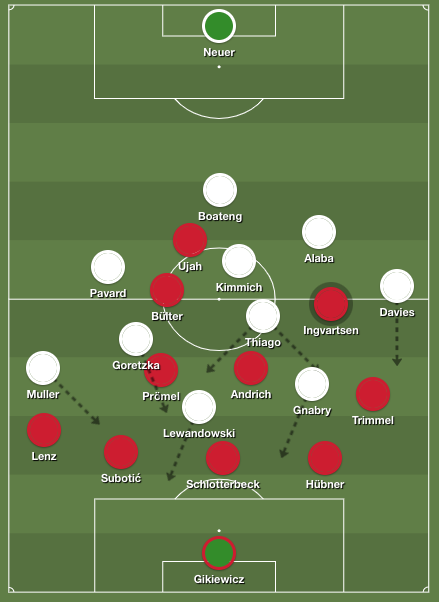 Bayern’s offensive movements in the second half. Müller holding his position out wide enabled Pavard to move inside and triggered Bayern’s push into Union’s half.

These gaps were usually filled by Kimmich or even Boateng, as Bayern pushed up aggressively to squeeze Union in the middle of the pitch. This dominance slowly but surely began to take its toll on the home side, as Union dropped back to defend in numbers and attempted to deny Bayern the opportunity to play through the middle. They were very nearly foiled when Gnabry burst through the left halfspace following a superb 1-2 combination with Davies on the wing, but the winger was unable to make the chance count as he shot wide.

Still, another opportunity presented itself after winger Kingsley Coman replaced Goretzka as Müller moved inside to become the attacking midfielder. The directness of Coman was startling compared to the patterns that Bayern had weaved for most of the afternoon, and he very nearly assisted Gnabry with a low cross that the latter was unable to finish. However, the visitors were not to be denied another goal, and Pavard scored from a corner to ice the game as Union finally conceded the battle. 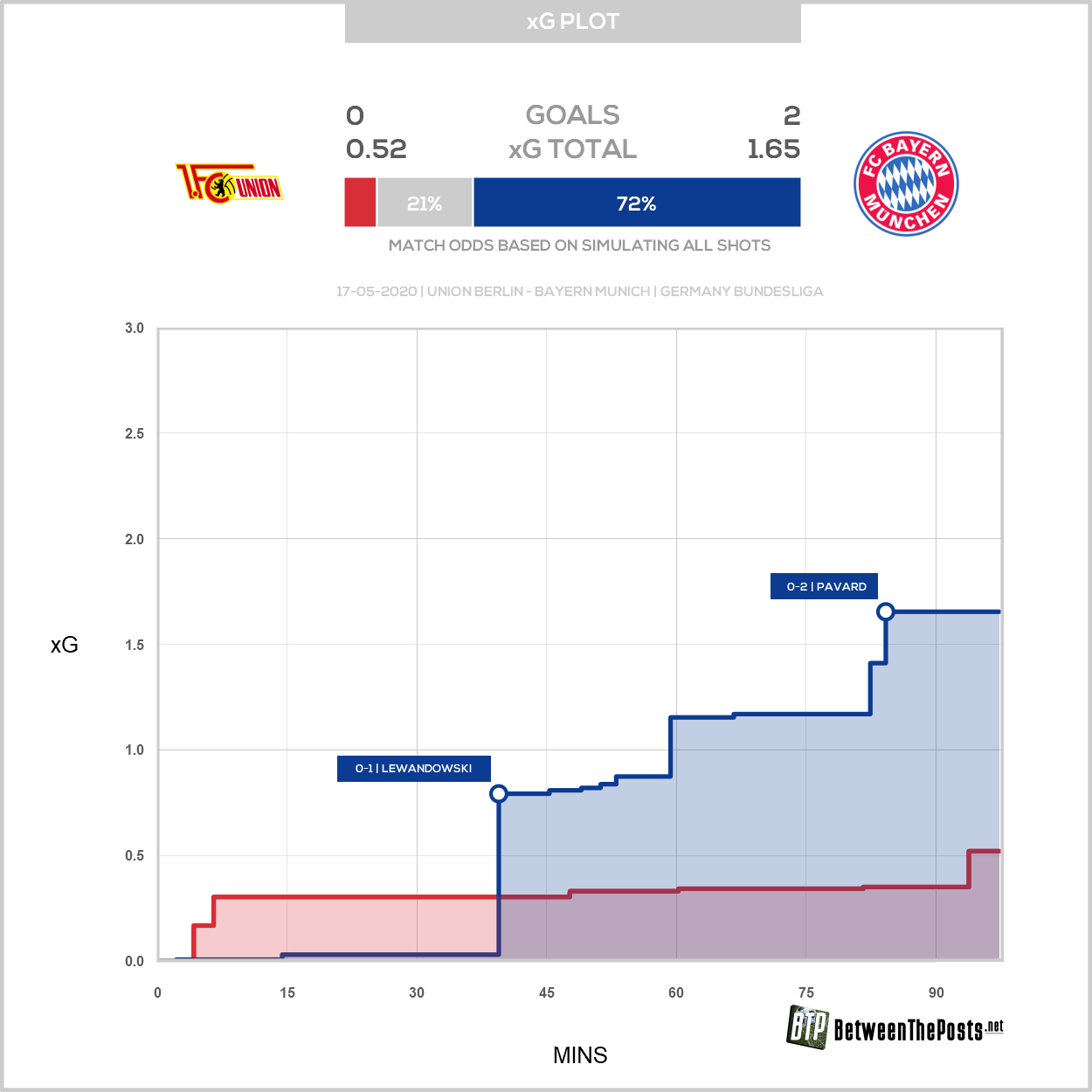 A loss to Bayern is rarely an anomaly for teams in the Bundesliga but Union can be proud of the challenge they posed to the defending champions. Bayern were no doubt hobbled by a lack of match preparedness coming in, but the same applied to the home side who put up a good fight.

With this win, Bayern go four points clear at the top and put the pressure back on the chasing pack to make up the deficit. This is a position that the champions have been in before, and it is difficult to deny them the status of favorites given their dominance in the league and in Europe. 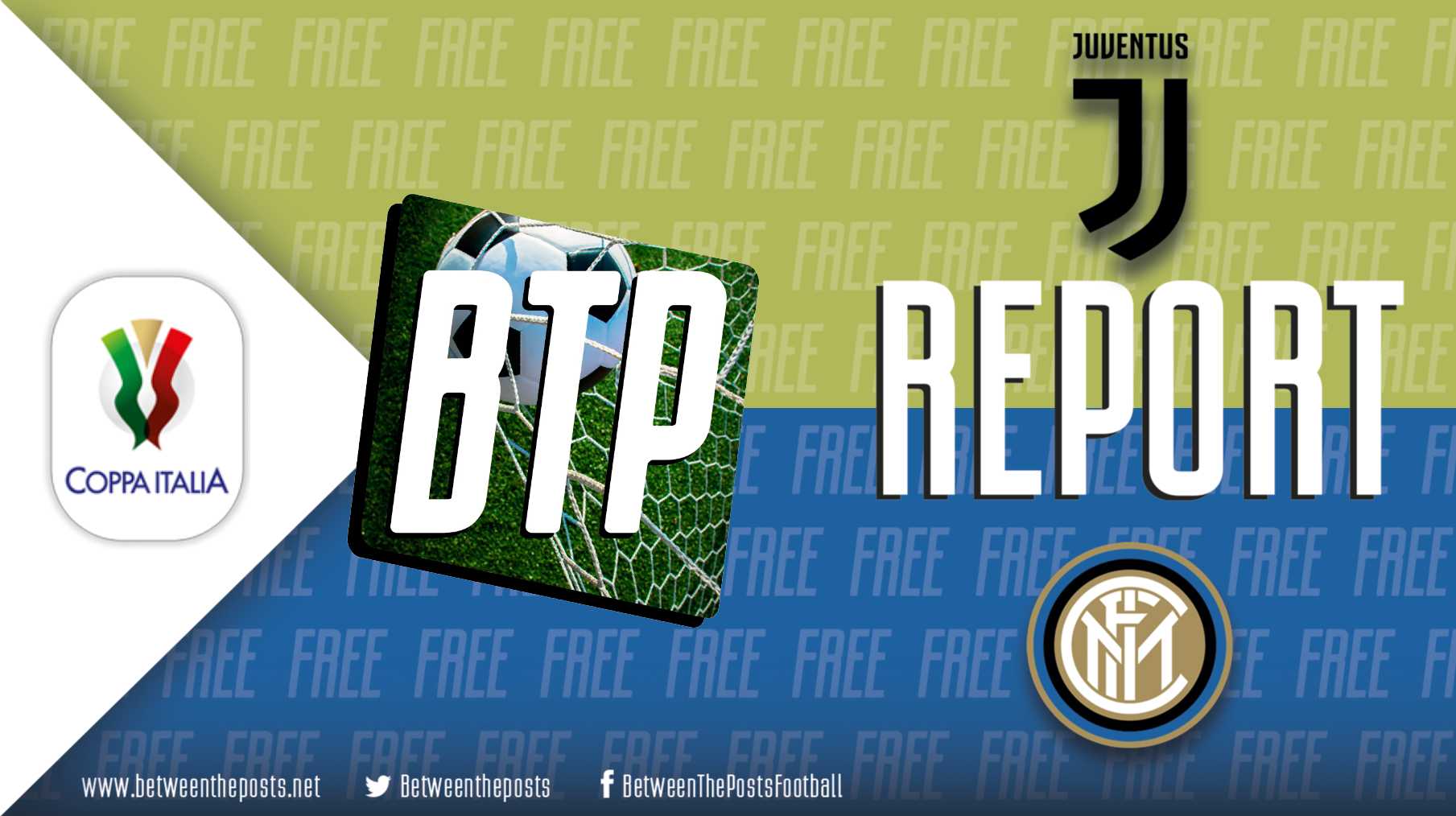 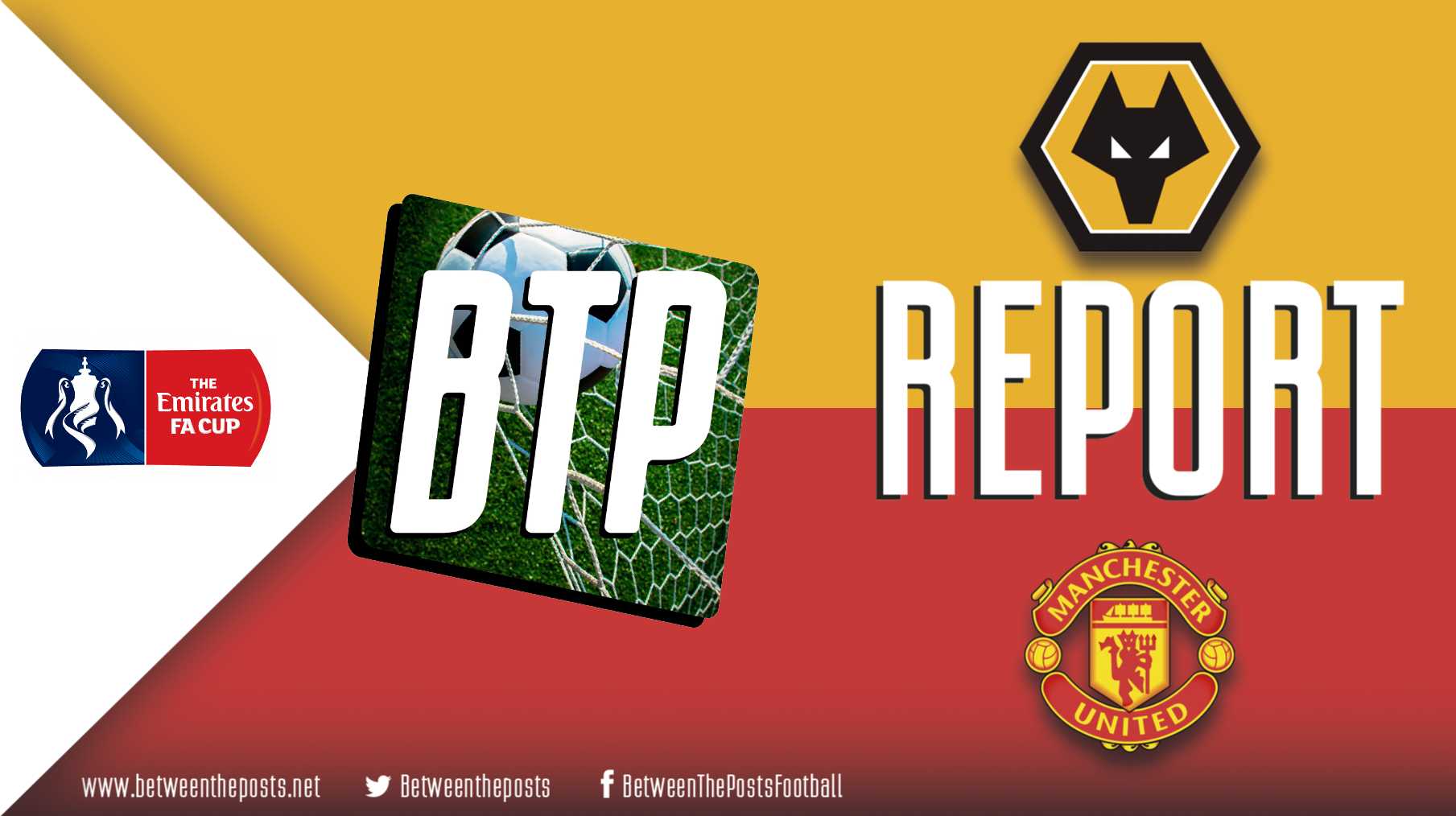