Vitória’s defensive organization made this game an uneventful affair from an attacking point of view, as Arsenal were often stuck in their u-shaped circulation and unable to make breakthroughs. Eventually Arsenal took the lead from a Shkodran Mustafi set-piece header, but were unable to hold on as Bruno Duarte secured a late equalizer for Vitória.

Arsenal were in a strong position in their Europa League group coming into this game, as they had won all of their previous three games. In the Premier League, things have not been going so smoothly for Unai Emery’s side. They currently have four wins from eleven games and are without a win in their last three league matches.

In their latest game, a draw against Wolves, Unai Emery had experimented with a 4-2-2-2 shape to try and freshen things up. For this game, he changed things again, this time opting for a 3-4-3 shape. Shkodran Mustafi and Rob Holding returned to the lineup to play alongside Sokratis in defense. At the top end of the pitch, Nicolas Pépé, Gabriel Martinelli and Bukayo Saka made up the front three. Alexandre Lacazette started on the bench, while the likes of Mesut Özil and new captain Pierre-Emerick Aubameyang did not travel to Portugal with the squad.

Vitória were still on zero points in the group prior to this game, giving them very slim chances of knockout qualification. They lined up in a 4-3-3 formation, with three changes from the lineup which was defeated 3-2 at the Emirates Stadium two weeks ago. Both goalscorers from that game were fielded here, with ex-Tottenham man Marcus Edwards starting on the right wing, and Bruno Duarte taking the number nine spot.

Throughout most of the game, Arsenal had a large share of the possession and were not usually pressed high up the pitch by Vitória. The home side instead preferred to sit back in a medium block A medium block refers to a team that retreats in their own half out of possession, generally only disrupting their opponents some way into their own half. and look to remain compact, counterattacking where possible.

Arsenal built in a 3-4-3, with the central midfielders Joe Willock and Dani Ceballos sitting in the second line of buildup, with occasional forays forward. The width was held by wing-backs Ainsley Maitland-Niles and Kieron Tierney, while Pépé and Saka played as inside forwards, starting from the halfspaces, If you divide the field in five vertical lanes, the halfspaces are the lanes that are not on the wing and not in the center. Because there is no touchline like on the wing, players have the freedom to go everywhere. But this zone often is not as well-defended as the very center. This makes it a very valuable offensive zone to play in and a lot of chances are created by passes or dribbles from the halfspace. dropping into deeper areas at times or drifting wide. 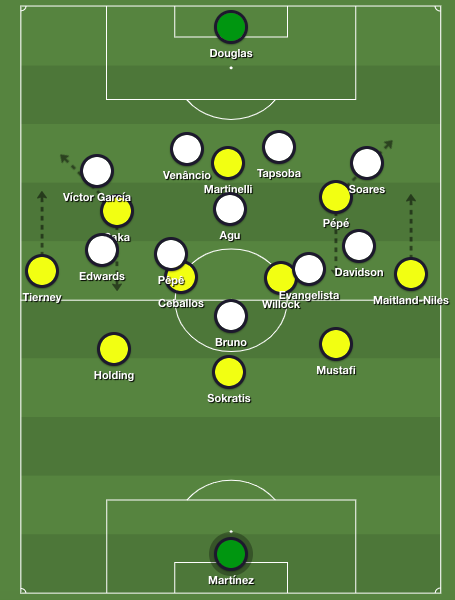 Vitória meanwhile defended in a 4-1-4-1 shape. The roles of the central midfielders Pêpê and Evangelista in their pressing scheme was notable, as they were the ones who would move out towards the ball when Arsenal’s wide center-backs Mustafi and Holding had the ball, allowing the striker Bruno to remain in more central areas.

The cover shadow When a player is positioning himself between the opponent that has possession of the ball and another opponent, he is blocking the passing lane. When applied the right way, his ‘shadow’ is effectively taking the opponent in his back out of the game, because the pass can not be played. of the central midfielder along with the compactness maintained by the wide midfielders meant that it was not easy to access the likes of Pépé and Saka when they showed for the ball in the halfspaces. Willock and Ceballos often had to drop deeper alongside the center-backs to get on the ball as they could be trapped in a triangle between the Vitória central midfielders and striker, making it hard for them to turn and play forward.

Even when the Vitória wide midfielders were not able to tuck in as much, in that case the Arsenal inside forwards would usually be closely pursued by the Vitória fullbacks, as well as Agu who shuffled across the pitch diligently to restrict the available space for Arsenal between the lines.

Arsenal were therefore often stuck in a u-shaped circulation When a team has possession on the sides of the pitch and with their own central defenders, this is called a ‘U-shape’, because it resembles the letter U. . for much of the game, struggling to make meaningful progress through the lines of Vitória. When they went wide, the covering from the wide midfielders, central midfielder and fullbacks collectively was strong in preventing them from finding passing lanes inside.

Arsenal were then forced to go back, or to try and exploit the speed of Pépé and Saka in the channels, which was rarely successful. Overall, Arsenal struggled to make breakthroughs throughout the match and Vitória’s defensive organization led to a sterile Arsenal performance in which they ended the first half without a single shot on goal. 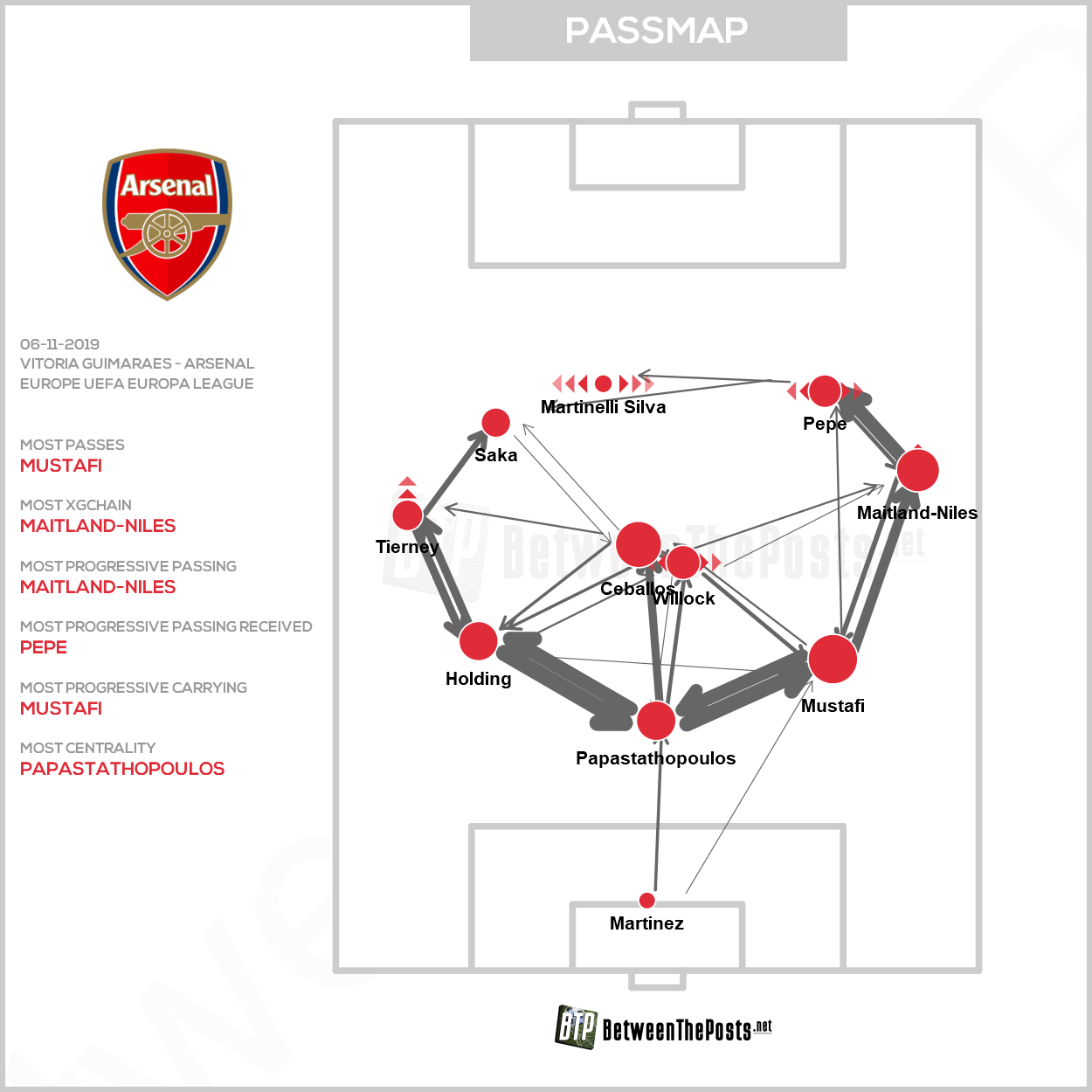 Arsenal’s U-shape in a passmap.

Vitória attack sparingly but with ambition

With Arsenal having most of the possession, Vitória’s offensive moments usually came in the form of counter-attacks, looking to exploit the skills of players like Edwards and Evangelista with numbers breaking forward against the Arsenal back three.

In the moments where they did have organized possession phases though, Vitória were actually somewhat ambitious with the amount of presence they had in advanced areas at times. Both fullbacks had license to go forward, as the wingers indented slightly.

Pêpê  and Evangelista from central midfield again were able to push quite far forward, meaning they sometimes left Agu and the two center-backs in seemingly exposed positions. Arsenal’s 5-4-1 shape did not give them huge presence against the center-backs of Vitória when the home side had the ball though.

Vitória also did not create a huge amount, however. Striking the woodwork from long range in the first half was about the closest they came for most of the match.

The patterns observed in the first half continued in the second half pretty much until Arsenal’s opening goal. The match mostly consisted of occasional Vitória attacking spells separated by longer spells of mostly u-shaped Arsenal possession with very rare breakthroughs.

Dani Ceballos was forced off with an apparent muscle injury early in the second half, forcing Emery to use Matteo Guendouzi, who came on to partner Willock in central midfield. Willock himself would later by replaced by Lucas Torreira. Emery also threw on Lacazette to replace Saka after the hour mark looking to change the game in Arsenal’s favour, but to little avail.

Eventually in the 80th minute, Arsenal got a goal, after still creating very little. Pépé swung in a free kick delivery from the left side of the penalty box, which Mustafi was able to meet and head past Douglas into the Vitória net.

It seemed as if Arsenal would walk away with the win at this point, as Vitória were not really applying huge amounts of sustained pressure against Arsenal’s defense. But the home side were able to capitalize on one of their attacks, as Bruno scored with an overhead kick from close range, assisted by substitute Rochinha after some good work on the right side by Edwards. 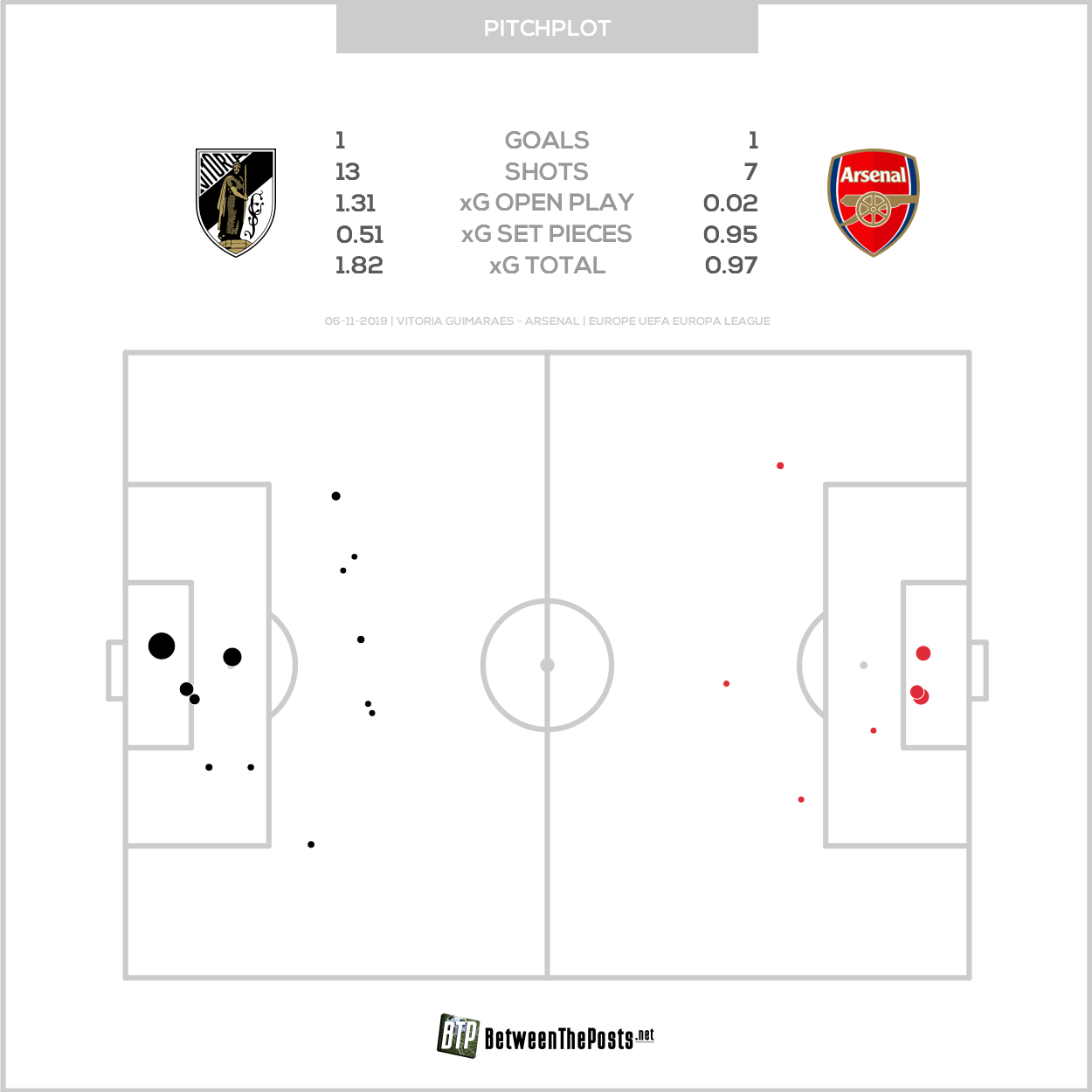 Arsenal are already in a comfortable position in the group, but the performance is another one which does not inspire confidence in the Emery project at the club. They lacked ideas against a good defensive setup, and even with some players rested, one might expect more given that there were still creative talents such as Willock, Ceballos and Pépé at Emery’s disposal for this game.

Vitória’s defensive scheme was effective in preventing Arsenal from playing through them. They did not achieve too much with their possession play, but overall the draw can be considered a fair result as the home side were not outplayed here by any means.