Any clash with Belgium is sure to increase the heart rates of the Welsh fans, bringing back memories from their EURO 2016 campaign. Even though the performance levels have fallen quite a bit ever since, they still managed to get the result they needed to ensure qualification for the play-offs to qualify for the 2022 World Cup.

Wales vs Belgium has become one of the most iconic clashes in European football, certainly as far as the Welsh are concerned. Memories are still fresh of their 3-1 win over the Belgians at the EURO 2016 quarter-finals, the one with a Cruyff turn from Hal Robson-Kanu, of all people – it is no exaggeration to say that it is probably Wales’ biggest and most famous win ever.

Wales have not managed to hit those heights again, failing to qualify for the 2018 World Cup, and going out in the round of sixteen to Denmark at EURO 2020. Having been drawn in the same group as Belgium for the 2022 World Cup qualifiers, Wales were always expected to be second-best and therefore make it to the playoffs at best. Going into the final matchday, they only needed a point at home against the top-ranked team in the world to ensure this.

Belgium, as they have done so frequently under Roberto Martinez, dominated qualifying, becoming one of the first teams to confirm their participation at the 2022 World Cup. With qualification secured, Martinez was free to make a number of changes for this clash at the Cardiff City Stadium, with a view to testing his bench strength.

Rob Page sent Wales out in a 3-5-2 formation, with Kieffer Moore and Daniel James as a ‘little and large’ strike partnership, ahead of Joe Allen, Aaron Ramsey and Joe Morell in midfield. Gareth Bale’s absence through injury meant that Ramsey took the armband, whilst the defense was made up of Connor Roberts and Neco Williams at wingback, with Joe Rodon, Chris Mepham and Ben Davies as the center-backs.

Martinez chose to rotate a number of his players, starting in goal, with Koen Casteels getting a rare outing between the sticks. 21-year-old Bologna center-back Arthur Theate made his debut, starting in the back three alongside Dedryck Boyata and Timothy Castagne. Hans Vanaken and Charles de Ketelaere were the other youngsters given a chance to impress, alongside regulars such as Kevin de Bruyne, Axel Witsel, Thomas Meunier and Thorgan Hazard, whilst Divock Origi led the line. 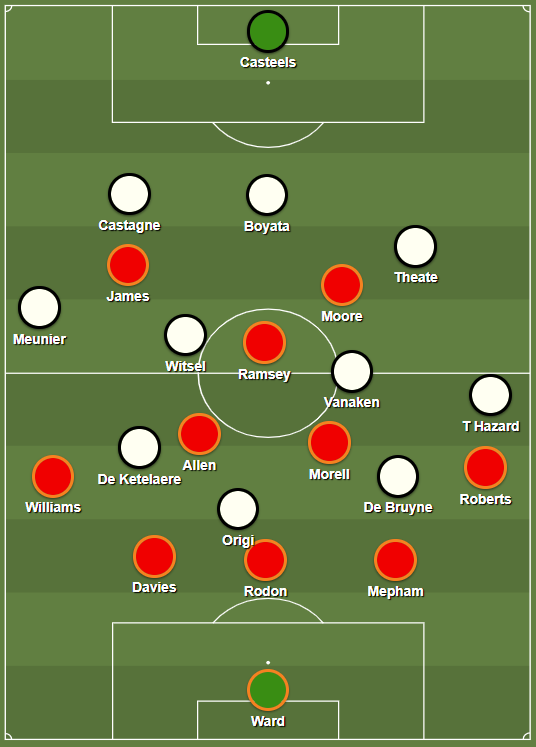 A lot of huffing and puffing without too much incision

This match was always going to be one where Belgium dominated possession – Martinez, for all his perceived faults, has given them a clear identity and structure in possession where they are able to keep the ball for long spells against most opponents. Wales, on the other hand, are clearly built to play on the counterattack, especially against ‘stronger’ sides, and thus, on paper, this was set to be an intriguing clash between two contrasting but well-matched styles of football.

In reality, however, it was anything but. Belgium did dominate possession, but there was very little penetration. They frequently managed to break Wales’ first line of pressure quite easily, but then struggled to progress the ball centrally, often having to move it wide to gain any territory deep in the Welsh half. Wales must be given credit here for doing a decent job in their 5-3-2 defensive shape, cutting off central passing lanes and compressing space. However, there were some occasions where the away side did manage to break through quite easily, and one such instance resulted in Belgium’s goal in the 12th minute.

Before doing so, it is also important to note just how poor Wales were at retaining possession and building any sort of pressure on Belgium. They frequently went long towards Moore from all areas of the pitch, and whilst the Cardiff City striker did win some balls in the air, he was not as aerially dominant as would be expected of a 6’5” striker. Further, Wales did not have the right structure around him to capitalize on second balls, so even when he did win the first duel, there were no teammates around him to pick up the second ball, thereby ceding possession. The fact that Belgium’s goal came from a failed attempt to find Moore with a long ball only adds to the failure of this tactic.

Martinez opted to play Timothy Castagne, who is a fullback or wing-back, as the right-sided center-back in this lineup, even with the likes of Wout Faes and Jan Vertonghen available and on the bench. This may have been a deliberate choice to guard against Daniel James’ pace down Wales’ left, with Boyata and Theate left to deal with Moore’s aerial ability. At the same time, knowing that Belgium would dominate possession, having a player comfortable at progressing the ball through carries as one of the wide center-backs was also a good choice, since he would have some space to do so against a Welsh side who do not really press too high.

Castagne was decent on the night – he did play a big role in Belgium’s goal, but was also caught out for Wales’ equalizer, first allowing James to run in behind him, and then failing to block his cross that Moore converted. However, here we will look at the overall structure that allowed him to break forward to set up De Bruyne’s opening goal. 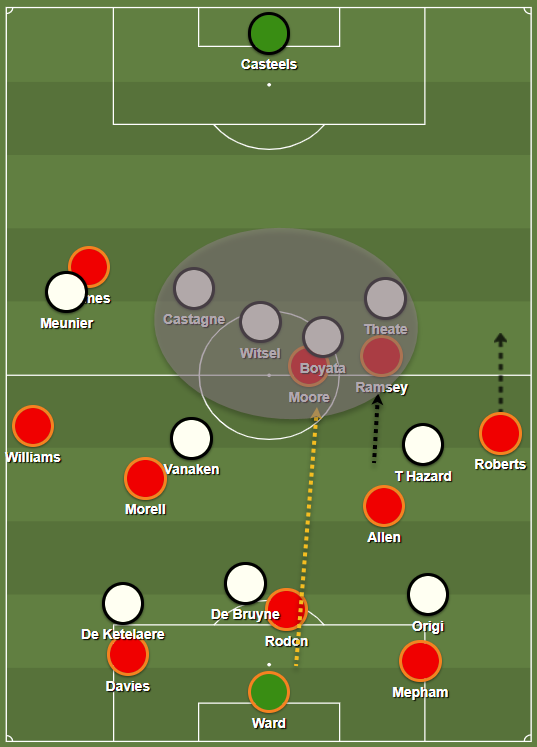 12th minute: Wales look to play long towards Moore from a goal kick, with Ramsey making a run behind him to try and get on the end of a flick-on. However, note how Belgium have a 4v2 numerical overload in this zone, so even if Moore did win the duel, it would fall to a Belgian player rather than a teammate. 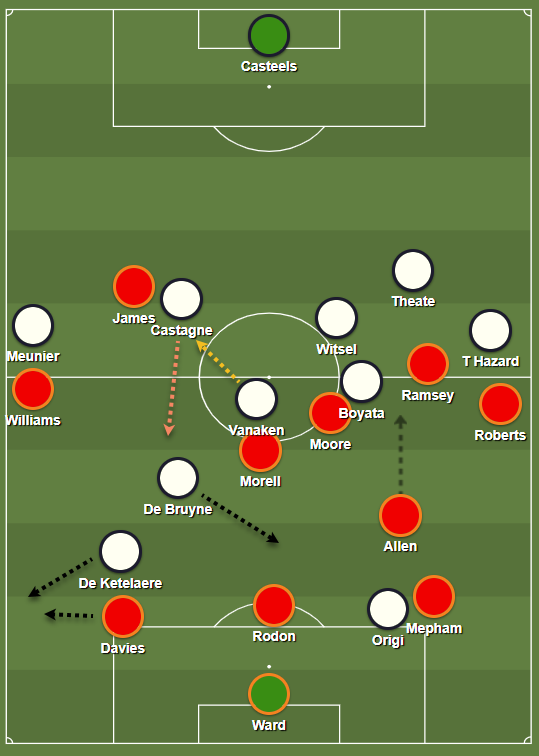 Boyata wins the header and Vanaken picks up possession, transferring the ball back to Castagne, who now has acres of space to run into. Joe Morell has been drawn to Vanaken, whilst Allen is too deep and on the other side of the field. This leaves the midfield open, with De Bruyne and De Ketelaere making further runs to create more space.

Having a player who is comfortable enough on the ball to drive forward in attack from a deeper position is a very effective way to break lines and create disorganization. That is exactly what happens here, as Belgium are able to advance rapidly, and the ball is then moved wide for De Ketelaere, whose deflected cross eventually falls for De Bruyne to hit a first-time finish into the corner from outside the penalty area.

Using Castagne in this manner may not be a sustainable long-term strategy, especially given his unfamiliarity with the position, but it has its benefits as well, as seen here.

Wales got the point they needed to confirm their presence in next March’s playoffs, thereby keeping their World Cup dream alive. However, this was not a good performance, as they struggled to create chances, and whilst they were solid enough for the most part, Belgium did manage to find some threatening positions behind their defensive lines on a few occasions. Wales are one of the seeded sides for that draw, and thus will avoid the likes of Portugal and Italy in the playoff semi-finals. However, with single-legged ties and Poland, Austria, Turkey and Ukraine among their potential opponents, it will not be a straightforward task for Wales to make it to Qatar 2022.

For Belgium, this was a case of testing their reserves, and on this evidence, it is clear that there is a considerable drop in quality between Belgium’s first choice players and their backups. The Spaniard will be hoping that his top guns will be fit and firing in a year’s time, as this will be the last chance for Belgium’s own ‘Golden Generation’ to sign off with a trophy. 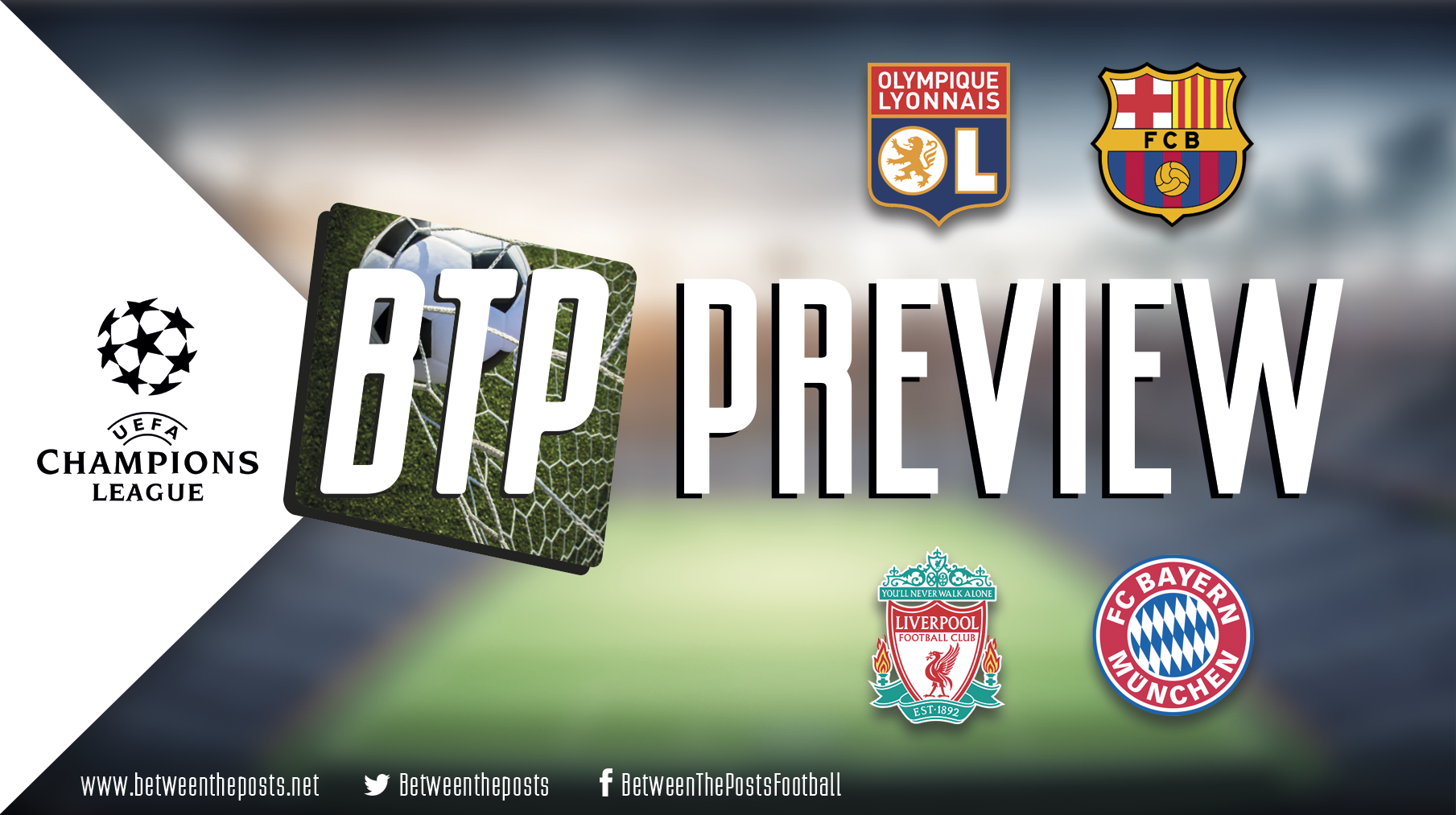 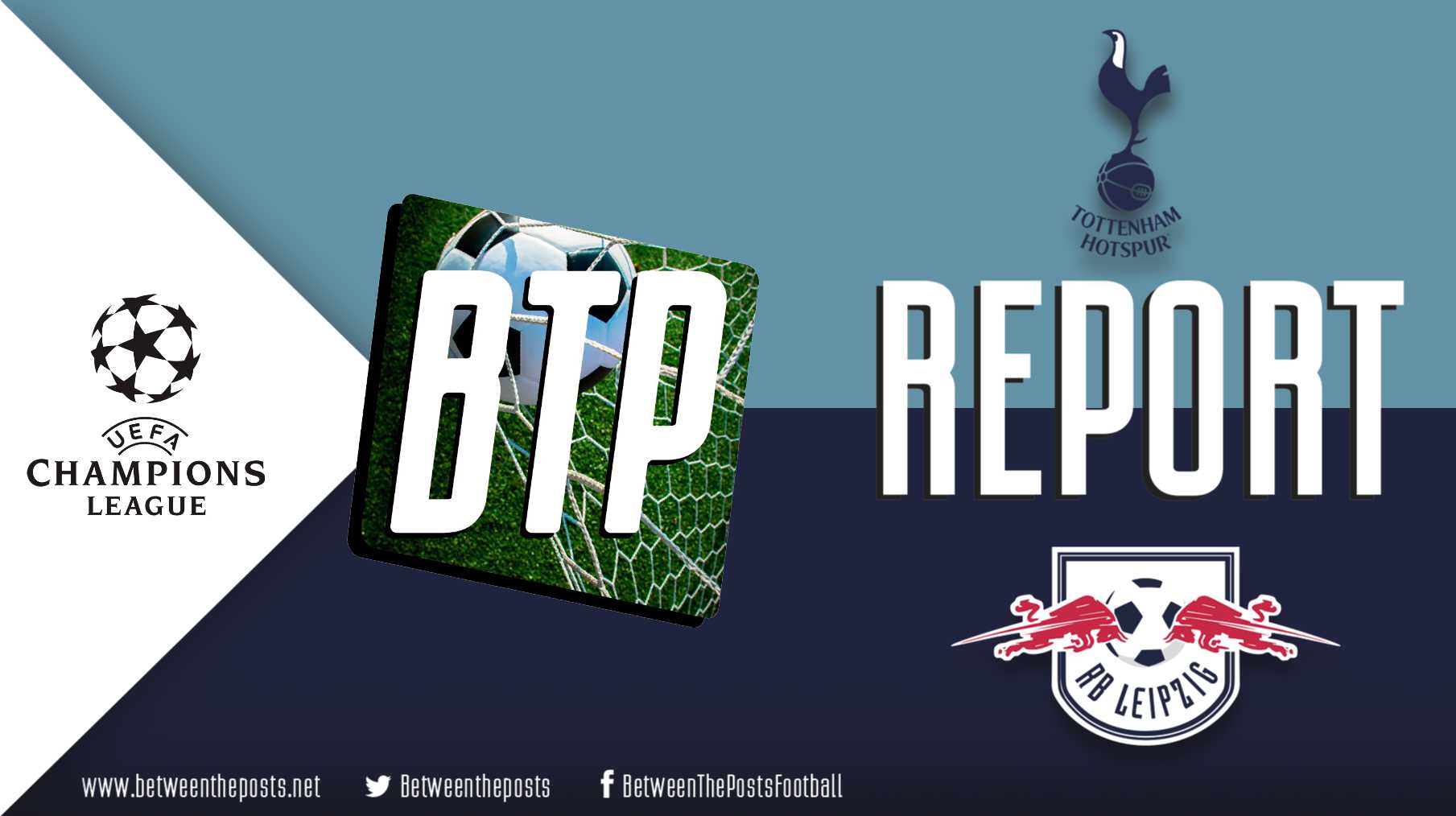