Erik Lamela’s header late in the first half was all that separated West Ham and Tottenham Hotspur in a closely contested London derby. Tottenham largely dominated the first half before West Ham gained the upper hand and enjoyed more possession in the second half, without causing a lot of actual trouble.

Having been the fifth highest spending team in the summer transfer window, and having signed a former Premier League winning manager, expectation levels at West Ham were elevated going into this season. After losing their first four games of the season though, it seemed that West Ham would not come close to meet these expectations. Even at such an early stage in the season, questions started to arise about how long Manuel Pellegrini’s tenure at London Stadium would last.

The other side of the story was that these losses for West Ham came in away games against two top-six teams (Liverpool and Arsenal). The other two defeats were against an in-form Bournemouth and Wolverhampton Wanderers, who are not your run-of-the-mill promoted team, but already look like a strong mid-table Premier League team. With context, the run of four defeats does not seem as terrible. Since that losing streak, things have turned around for West Ham, as they kept a clean sheet against Chelsea and gathered 3-1 wins over both Everton and Manchester United.

Tottenham meanwhile found themselves two points away from the top of the Premier League before this game. The fact that there is now a bit of pressure on manager Mauricio Pochettino to deliver silverware at Tottenham can be seen as a testament to how far he has taken the club. Spurs have had disappointing results in important games this season though, such as against Watford and Liverpool. Additionally, they are yet to pick up a point in the Champions League, albeit in a difficult group.

As for the tactics on display in this match, Pellegrini’s side once again played in a 4-3-3 system. They have looked more stable that way, compared to the 4-2-3-1 formation that was utilized earlier. Two personnel changes were made compared to their last Premier League game against Brighton. Central midfielder Pedro Obiang was replaced by Robert Snodgrass, who partnered Mark Noble in the middle of the park, despite usually playing in a wide role. Aaron Cresswell was also introduced into the lineup at left-back, replacing Arthur Masuaku who was only fit enough to make the bench after suffering with an ankle injury. 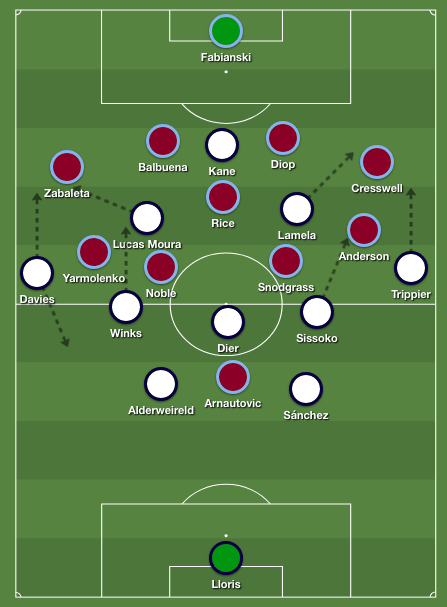 Tottenham break through West Ham’s midfield
From a nominal 4-2-3-1 starting formation, Tottenham usually shifted into something resembling a 2-3-4-1 when in possession. Eric Dier would position himself in front, in between or on either side of the center-backs. Kieran Trippier pushed up high from the right-back position as he does for club and country, while Moussa Sissoko dropped back into a more defensive position on the right.

Harry Winks would do the same, or push up higher when Davies overlapped. Both Sissoko and Winks often started from deep positions, but both were given freedom to burst forward with or without the ball on occasion. Lastly, Lucas Moura, depending on the position of his teammates, would either stay wide and play for one-on-ones against Pablo Zabaleta, or drift inside to join Lamela between the lines.

West Ham defended against this in a 4-1-4-1 formation, but largely struggled to prevent Tottenham’s players getting on the ball between their defense and midfield. This was mainly due to central midfielders Noble and Snodgrass, who tried to press Tottenham’ deep midfielders in the buildup, which left spaces either side of the defensive midfielder Declan Rice. Because of this, the lively pairing of Lucas Moura and Lamela could receive the ball and try to threaten the defense, although West Ham defended well enough to hold them off for most of the first half.

Because Tottenham had more possession, West Ham’s wide midfielders Andriy Yarmolenko and Felipe Anderson were forced back very deep at times. They usually tried to stay level with the Tottenham fullbacks. West Ham were flexible in terms of who would actually press the Tottenham fullback once they received the ball, though.

Cresswell moved out to pressure Tottenham’s ball-carrier, Trippier. Sissoko made a run past Anderson into the open space behind Cresswell, and Anderson was slow to track him. As Sissoko cut inside against the recovering Anderson, West Ham’s defensive line attempted to step up, anticipating a cross being floated over the defense and trying to play potential recipients offside. Lamela arrived late into the box from a deeper position, allowing him to run onto the cross without being caught offside, and his header made it 1-0 to Tottenham just before half-time.

West Ham gain the upper hand
After the break, West Ham gradually fought their way into the game more, and increased their attacking prowess as the game went on. Their strategy was not especially complex – they have a forward in Marko Arnautović who can be used as physical outlet in terms of holding the ball up, as well as being a difference maker in the final third.

West Ham looked for the Austrian attacker with long balls when they wanted to get forward quickly. Arnautović would try to provide knockdowns and lay-offs for the attackers around him, or chase passes in behind the Tottenham defense. The physical battles that ensued between Arnautović and Tottenham’s imposing central defender Davinson Sánchez truly were a joy to behold.

When in Tottenham’s half, West Ham generally looked to create crossing positions with their wingers’ dribbling, supported by the fullbacks. Their play was very flank-oriented during the second half. Pellegrini introduced an extra striker in Javier Hernandez, who replaced Felipe Anderson. This meant that West Ham moved into a 4-4-2 formation, as Snodgrass moved into Anderson’s position on the wing, while Noble moved deeper in midfield alongside Rice. This was West Ham’s second substitute, the first one being forced shortly before half-time due to Yarmolenko picking up an injury. He was replaced by the young winger Grady Diangana, making only his second appearance.

Being forced back more by West Ham, Tottenham opted to play more long and direct balls in the second half as well. Due to the increased pressure from West Ham, they ended up going long towards Kane with the likes of Lucas and Lamela trying to pick up the pieces. West Ham’s push for an equalizer with fullbacks higher up the pitch also left space for some Tottenham counters, situations where Lucas Moura in particular has the potential to be dangerous with his dribbling speed. Even though the space and potential certainly was there, Tottenham’s counterattacking was subpar at best.

West Ham were still unable to find an equalizer despite their best efforts. The closest West Ham came were two shots from Arnautovic, which both called for good saves from Hugo Lloris. And even though it was a problem for Spurs this season to see out a match in which they led, no further moments endangered them taking the three points.

Takeaways
West Ham showed their weaknesses but were never completely dominated or played off the pitch. They ended up pinning Tottenham back towards the end of the match. As a result, they can be fairly happy with their performance considering they were up against a top team, and Manuel Pellegrini should be given some more time to truly implement his ideas. The upcoming three league matches – against Leicester City, Burnley and Huddersfield Town – will be crucial for West Ham in gaining some momentum.

From a Tottenham point of view, it truly felt like a game after the international break. For them, this match turned out to be more a case of grinding out a result once the lead was acquired, rather than playing sparkling football for ninety minutes. They escaped a tough derby game with three points on the board, which is what matters most for them at this point in the season.

Use the slider below to scroll through all available match plots:
expected goals plots, passmaps and zone 14 and halfspace passmaps. 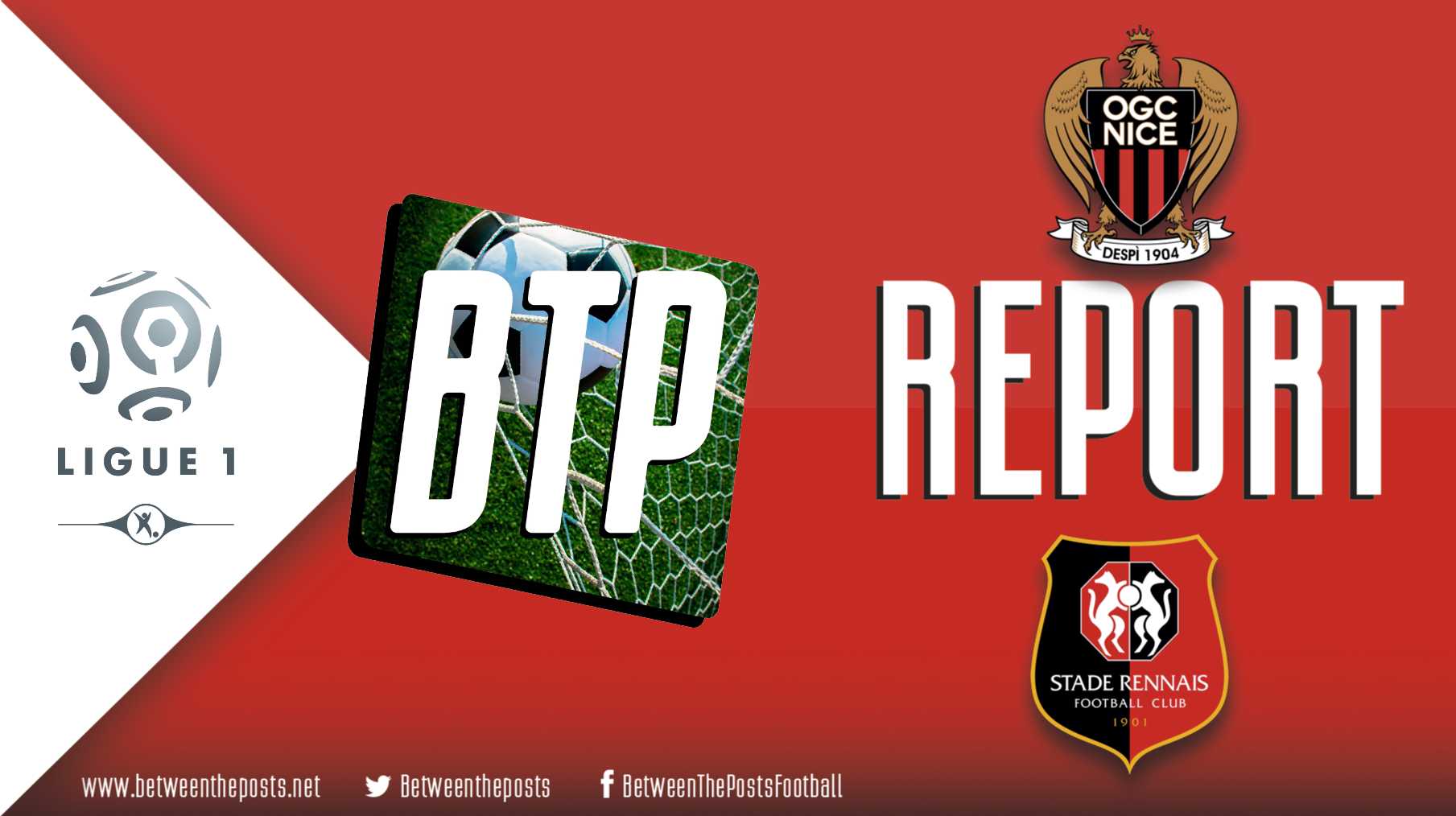