First Fiorentina scared them, then they slowly deceived them, only to dismantle Milan once and for all in a second half that could not have gone worse for Giampaolo’s side. The newly appointed manager is left walking on a thin line, which is likely to break at any minute.

On the back of one win in his last three games, Marco Giampaolo was itching for a win to temporarily avert rumors of a possible sacking. Before the start of their sixth match in the league, Milan sat in a disappointing twelfth place as their opponents on the night, Fiorentina, looked onward from afar in a dismal seventeenth position. Something reminiscent of a tragic drama awaited San Siro when the hosts seemed at the final straw in the hands of their adversary’s mercy, whose anguish, although on a parallel wavelength leading to sorrow, followed an opposite storyline. Milan’s agony has been one of persisting effect, carried throughout the entire campaign and without a beam of light peeking through the stadium’s roof. Fiorentina, however, has suffered a downfall of a different sort, switching inconsistently between valiant displays and disastrous defeats. All in all, their start to the Serie A campaign has been promising in many aspects.

Most of Fiorentina’s results seem justifiable on paper, having played Napoli, Juventus, and Atalanta in the space of four games. It is the inconsistency that has raised the most questions. Only against Juventus were Fiorentina able to maintain a high level of performance throughout the entire game, and against both Napoli and Atalanta they gave away a lead, not to mention their loss to Genoa. Thus, Milan should have acted as the test which would determine their prospect and possibly confirm the positive signs from their draws against Juve and Atalanta and the recent win over Sampdoria.

Amidst all the rumors, Giampaolo and Montella both started the same eleven as in their previous game, finally giving their tactical project the long-sought continuity. Franck Ribéry led the line with Federico Chiesa, whilst Krzysztof Piątek and Rafael Leão started upfront on the other end of the field.

Milan tried building the play from the back as we have become used to over their last year under Gattuso and as expected with Giampaolo. However, Fiorentina’s pressing made it hard for Milan to progress the ball.

The front two pressed the center-backs while Gaetano Castrovilli marked Ismaël Bennacer. Behind them, Milan Badelj and Erick Pulgar marked Franck Kessié and Hakan Çalhanoğlu and the two wing-backs, Pol Lirola and Dalbert, stayed halfway between the Milan fullbacks and their center-backs to either retreat in defense or step out on their opponent. This way, Milan faced the same struggles they failed to overcome against Inter and as a result, the ball was often played back to the goalkeeper Gianluigi Donnarumma, who could only play it long.

When Milan had the ball behind the press and Fiorentina had to retreat, the visitors would position themselves in a 5-3-2 shape. As opposed to the league leaders’ application of the formation, the visitors were not quite able to completely limit Giampaolo’s men due to insufficient pressure on Bennacer, who could consequently pick players in the halfspaces If you divide the field in five vertical lanes, the halfspaces are the lanes that are not on the wing and not in the center. Because there is no touchline like on the wing, players have the freedom to go everywhere. But this zone often is not as well-defended as the very center. This makes it a very valuable offensive zone to play in and a lot of chances are created by passes or dribbles from the halfspace. or out wide. Once the home side did reach the wide areas, though, they struggled at creating quality chances, and even when they were able to cross from good spots after individual moves, Fiorentina’s center-backs dealt with the danger well.

The door is open

Milan pressed similarly to the way they did in the derby, with the front three pressing the back three in a 4-3-3 shape and Çalhanoğlu pressing the pivot, Pulgar. As a result, however, the Turkish midfielder had to keep an eye on both the midfielder and Fiorentina’s right wing-back, Lirola, due to Lucas Hernández remaining deep. The visitors could thus exploit this burden on the midfielder through third man lay-offs A passing combination between two players, while a third player simultaneously makes a run, usually in behind the opponent’s defensive line. After the initial combination, the ball is quickly played in depth for the third player to run onto. involving the center-back, midfielder, and wing-back. 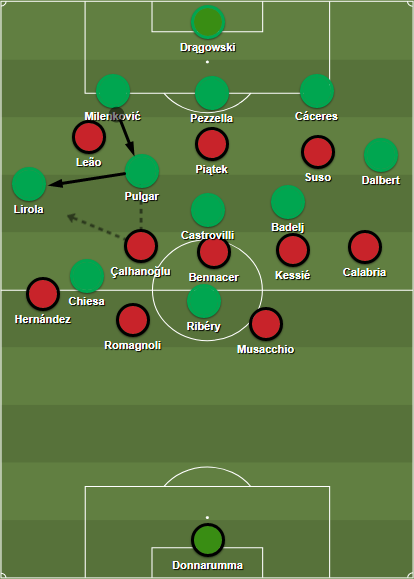 Once Fiorentina accessed the wing-back, though, their passing options were not always the most optimal, which forced them to play the ball along the touchline into the attacker’s runs, which triggered vertical attacking dynamics in a rather defensively open first twenty minutes. Fiorentina’s penalty and subsequent opening goal from the spot was an example of this.

After Fiorentina took the lead, Giampaolo adjusted his team’s buildup shape. Whereas Bennacer had dropped deep in the beginning when his side attempted to build from the back, the manager instructed his two central midfielders to do so instead while the pivot stepped up between the lines. By doing so, Milan should have been able to find more space between the lines once the pressing was bypassed through a long ball to the striker. However, Milan were unable to free players between the lines since Piątek failed to win the aerial duels against his marker. 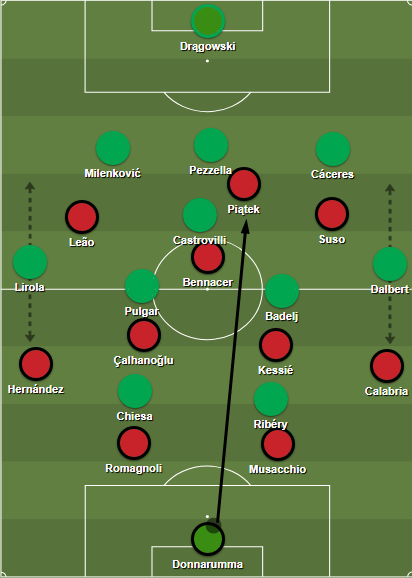 Donnarumma plays a long ball to Piątek, who is expected to knock the pass down to Bennacer or an onrushing midfielder.

At half-time, Giampaolo replaced a missing Kessié for Rade Krunić, probably hoping to increase the technical quality in midfield for rapid vertical combinations. Just like his aerial duels, though, Piątek’s combinational play was largely inaccurate, which either slowed down or halted Milan’s progression.

As if things were not bad enough, Musacchio was sent off in the 54th minute, which saw Giampaolo switch his side to a 4-4-1 shape and replace an ineffective Piątek for center-back Léo Duarte. Meanwhile, Çalhanoğlu and Suso slotted aside Bennacer and Krunić respectively. A completely stunned Milan side followed, unable to cope with a Fiorentina pressing that could bolster Cáceres wide on Suso to cover for Dalbert thanks to the numerical superiority. It was only a matter of time before Fiorentina finally put the game to bed in the 66th minute through Castrovilli.

Relieved of pressure – which would be bypassed regardless, due to the numerical superiority at the back -, Fiorentina calmly built the play around the midfield line to then switch onto the wing-backs and attack from wide. The penalty Chiesa missed was a result of the action described above and a simple strategy through which Fiorentina dismantled a crumbling Milan team. Suso’s lazy tracking back also contributed to the ease at which Fiorentina combined past the Spaniard and subsequently Calabria, forced to step out. To limit any further damage, Giampaolo was prompted to switch Leão to the left wing and Krunić to the right, while Suso sat upfront.

Fiorentina’s third goal eventually came against a defensive structure scattered all over the place, in a game that had ended after Musacchio’s sending off, only for Leão to reduce the goal distance to two again shortly after.

Giampaolo’s Milan keeps worrying as its symptoms remain ever more evident in the face of poor integration of the new signings. If a manager so glued to a system that he has worked on implementing during the entire preseason hesitates when asked about its strategy’s future, then the indications cannot be anything other than concerning. When he actually abandons the system, then all one can expect is a downhill route. Milan are not showing any signs of improvement, and, six games into the season, Giampaolo may not have any more time to demonstrate his abilities.

Montella, on the other hand, got the rematch he has been craving for time through a convincing victory that outlined the team Fiorentina will want to become over the course of the season: an intense side in every phase of the game with a strong emphasis on pressing and short and long counters. The second win in a row in a tough run of games finally gives the Florence side the much needed confidence boost ahead of future games and the deserved reward for Montella, who is going all in to prove his worth after years of underperformance and mockery. 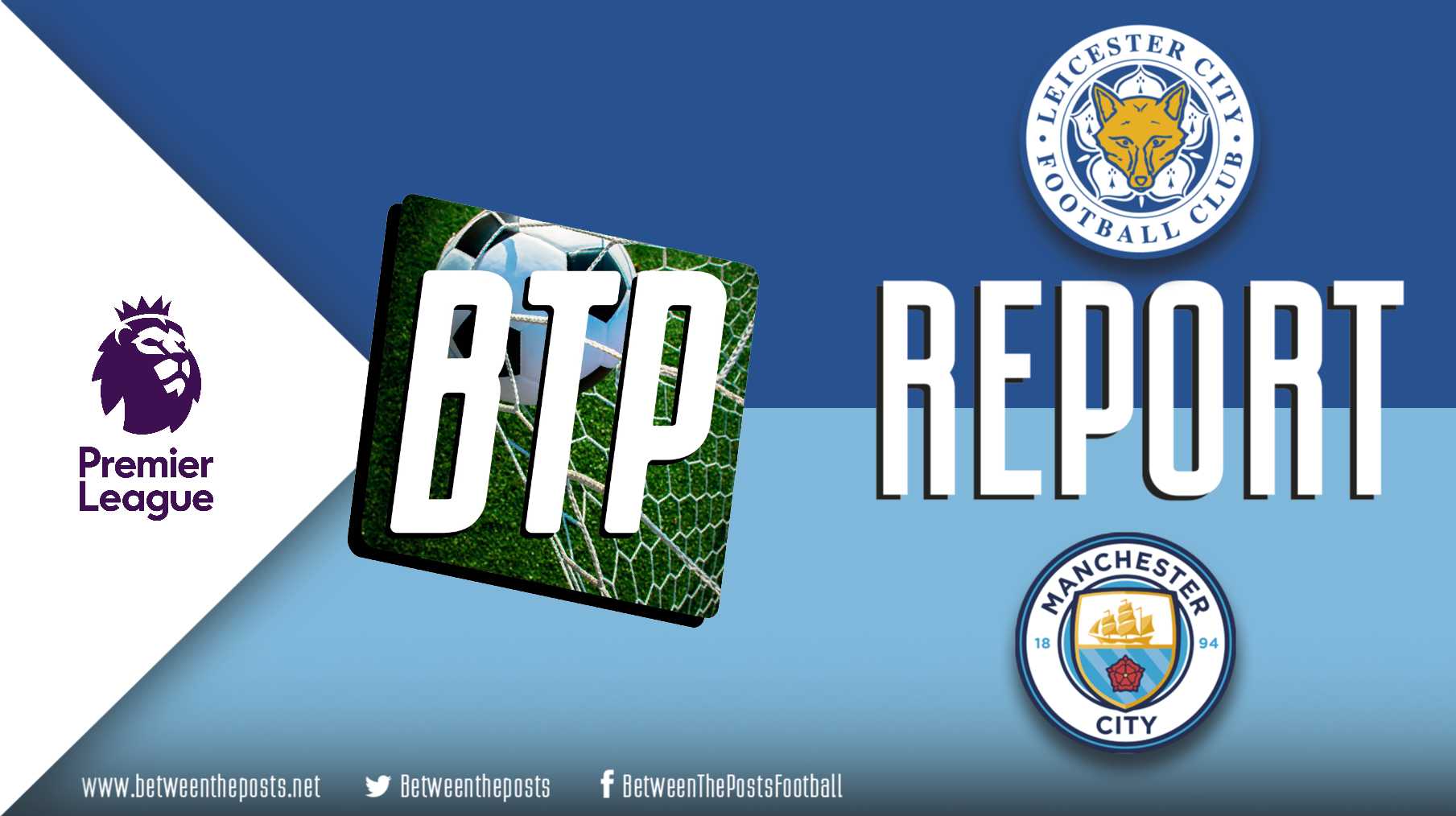