Two evenly matched sides delivered a high-energy game with few genuine chances. The match was defined by the way both teams pressed and it titled Chelsea’s way late, as Michy Batshuayi scored a late winner.

The appointment of Frank Lampard as Chelsea manager was greeted with a healthy bit of skepticism, as should be the case if a young and inexperienced manager gets one of the biggest jobs in the Premier League. So far, Lampard is doing fine, as it looks like he will successfully change the team’s style of play, implementing plenty of young talent, without dropping significant points along the way.

Chelsea are fourth in the Premier League, and our model actually has them finishing third, as their underlying statistics are quite decent. Coming into this game, they had won against Lille and lost against Valencia, meaning the matches against Ajax home and away could make or break their Champions League season.

After tinkering around with a formation with three central defenders in the opening stages of the season, Lampard has settled for a 4-3-3 shape in recent weeks. The absence of N’Golo Kanté meant the midfield was formed by Jorginho as the lone number six, joined by Mateo Kovačić and Mason Mount as central midfielders. Up front, Tammy Abraham was flanked by Willian and Callum Hudson-Odoi.

In Ajax manager Erik ten Hag’s 4-2-3-1 formation, after a long search for stability, the double pivot 4-2-3-1 is one of the most frequently occurring formations in football. The two most defensive midfielders are called a ‘double pivot’. is formed by Lisandro Martínez and Edson Álvarez during Champions League action. Whenever that happens, it means Donny van de Beek is played as mobile number ten, perfectly complementing false nine A striker that constantly drops deep and plays like a number ten. Dušan Tadić.

Both teams set out to prevent the opponent from playing out from the back, one more aggressively than the other. Ajax’ way of pressing was done as we know it from last season: a narrow zonal 4-2-3-1 shape is formed, and as the opponent is forced to the flanks, Ajax turns into a ferocious pressing machine. The way the press is conducted depends on the opponent; in this match, fullbacks Sergiño Dest and Nicolás Tagliafico were tasked to push onto Chelsea’s fullbacks after the wingers pressed inside. 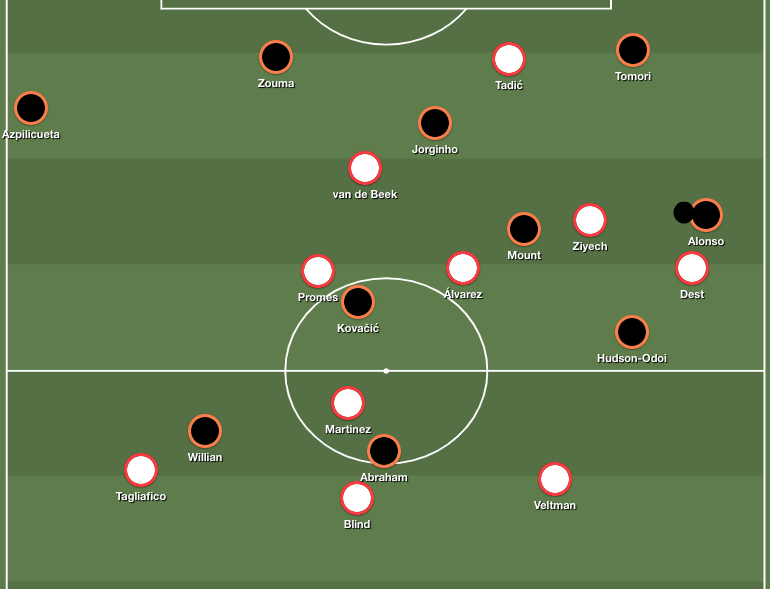 Chelsea were a bit less aggressive in their press than Ajax – not something to be ashamed of – as they tried to contain Ajax five to ten yards lower on the pitch. Starting from a 4-3-3 or 4-1-4-1 shape, Chelsea’s press was more about limiting forward passes than actually forcing turnovers, and they did a very good job in doing so. 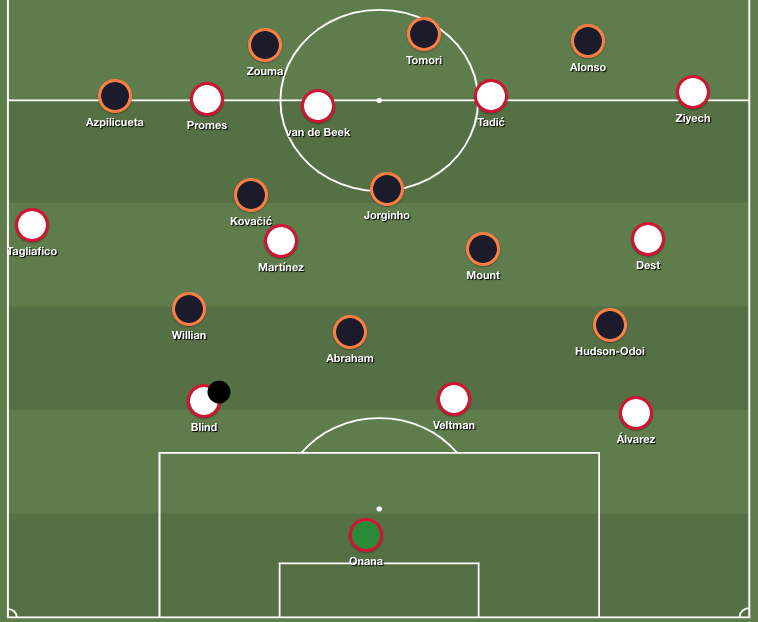 Since the summer of 2018, Ajax try to build play from the back with three defenders and one or two midfielders just in front. Apart from some unorganized moments when Chelsea’s front three was pressing and the rest of the team was not, Ajax had a very hard time in freeing up midfielders Martinez or Álvarez with their face to goal. More often, Ajax were left with sideways or backwards passing, or with aimed long balls from Onana into Tadić.

As Chelsea pressed less aggressively than Ajax, the Dutch team enjoyed more possession, but almost all of it happened far away from Kepa’s goal. In moments of defending on their own half, Chelsea would pull up either a 4-1-4-1 or 4-4-1-1 formation.

As the ball spent a lot of time in the middle third of the pitch, and neither team opted to play in a low block, A low block refers to a team that retreats deep in their own half out of possession, generally only disrupting their opponents around their own box. a lot of turnovers happened, meaning in the first half, this game was all about who controlled the opponent’s offensive transitions better. Overall, it is fair to say Chelsea got in better shooting positions and created more (half-)chances than Ajax. Most notably Hudson-Odoi made some questionable decisions when approaching goal, and squandered some of the best opportunities Chelsea had after breaking Ajax’ press or from counterattacks.

Apart from this, not a lot happened in terms of goalmouth action. In the 36th minute, the match seemed to get what it needed to catch fire: a goal. A vintage Hakim Ziyech shot – taken with all the confidence in the world from a horrible shot location – was deflected by Tomori and fell for Quincy Promes, who seemed to tap in the opener from close. Minutes later, his goal was called off by VAR, because he was offside by a few inches.

After Promes’ goal was denied, the match continued into half-time as it had done before, and going into the break, the match was still scoreless.

Ajax’ off night in the final third

Aside from their issues in getting the ball up the field, for the entire match, Ajax also had huge problems in creating chances. We have gotten to know Ajax as a short passing machine, as Tadić drops into midfield and heavily links up with the three offensive midfielders. Even in moments when Ajax managed to get the ball in the final third, The one-third of the pitch that is closest to the opposition’s goal. that famous interplay was nowhere to be seen. The movement patterns were still the same, yet the execution simply was not there. An off night by the offensive players, and as the passmap indicates they had a very hard time in stringing passes together. 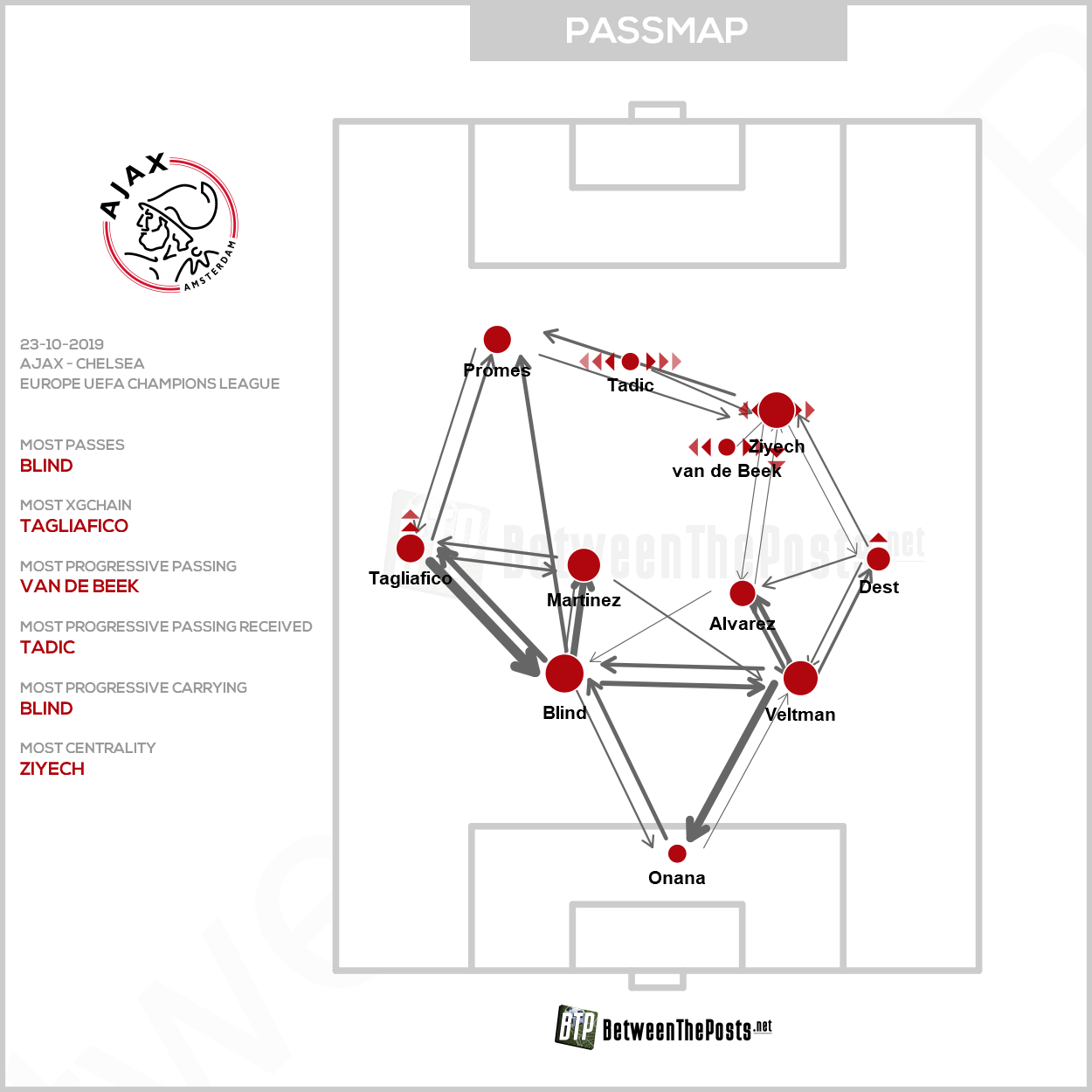 Note the lack of passes by Martínez and Álvarez in the double pivot, also failing to link passes forward. All of this is in part down to Ajax, and in part to Chelsea’s successful pressing.

Therefore, even more so than had been the case in the first half, the game turned into something of a stalemate, as it was still intense and tactical, but no team was able to take the initiative. The most notable offensive action from Ajax came after 58 minutes, as Álvarez headed a Promes corner-kick on the post.

Chelsea reels it in

As Lampard brought on Christian Pulisic (after 66 minutes) and Michy Batshuayi (after 71 minutes) for Willian and Abraham, one could be forgiven to think these were just positional switches. The introduction of Pulisic meant Lampard switched plan, however, as his team dropped back considerably lower on the pitch. Chelsea were the first team to call it a day, settle for a draw and retreat back further, now operating more in a 4-1-4-1 shape. Ironically, this is what gave them more and more chances to score the opener, as they opened up more space for themselves to counterattack. After 73 minutes, a deflected shot from Pulisic fell for Batshuayi, but he wildly shot it over the crossbar. 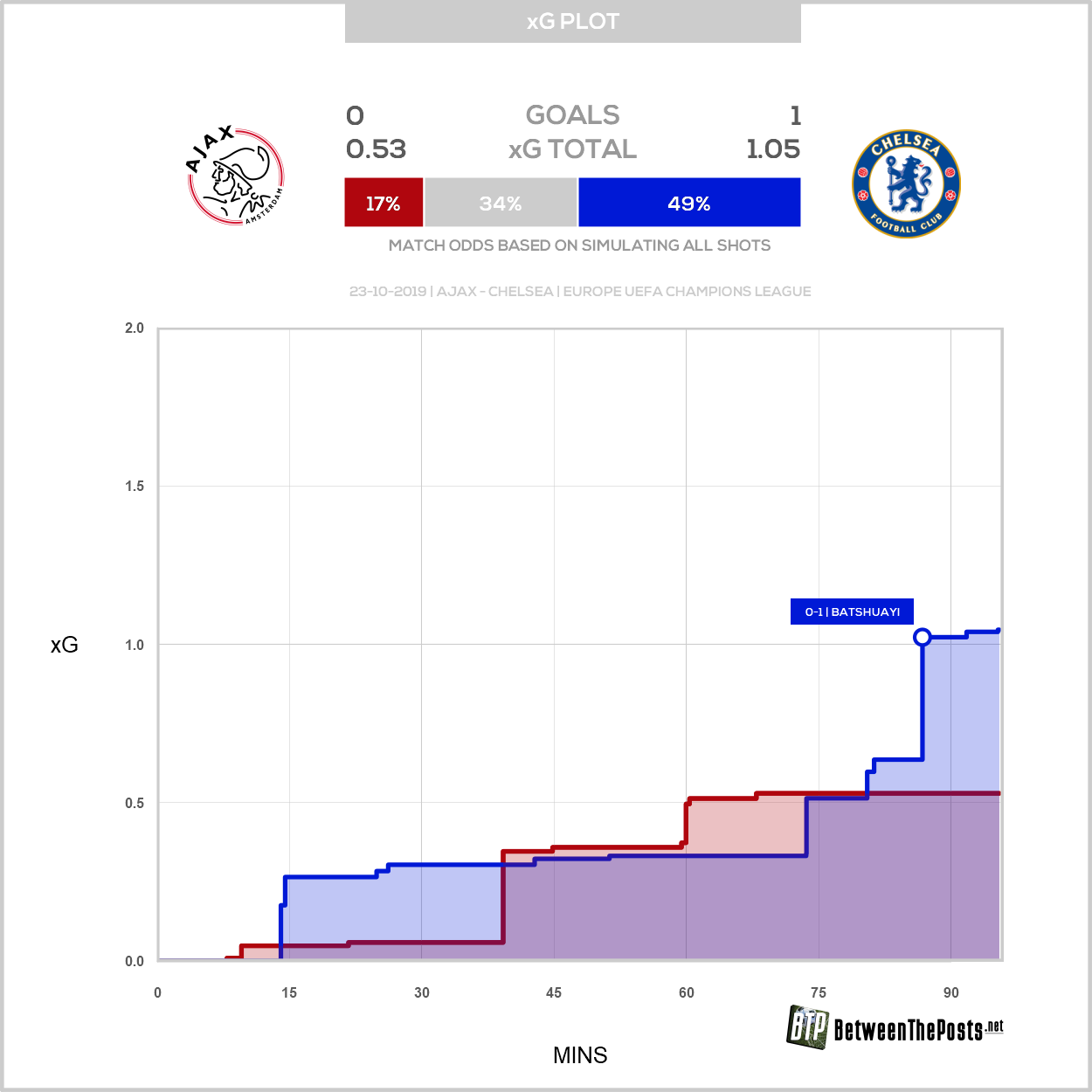 Ajax’ off day in the final third was epitomized in the 84th minute, when Tadić and substitute David Neres went two-versus-two against Jorginho and Zouma during a rare counterattack, but the delivery by Tadić was off the mark.

Decisive moment, as minutes before Chelsea’s opening goal, Tadić fails to deliver the ball to Neres on the counterattack.

The match probably did not deserve a winner, but in the end, if one team had to win, Chelsea was the team that had to. With five minutes left, Pulisic went one-versus-one with Dest, put in a low cross, and Batshuayi converted this time. Pulisic came into the game as a true impact sub, as he collected two shots and assisted three shots as well.

In an effort to score the equalizer, Ajax quickly brought on Klaas-Jan Huntelaar and Siem de Jong, but they barely reached Chelsea’s penalty area. The game ended in line with what Ajax had showed all night long: a complete offensive dearth, as they were not able to put together a late surge in search of an equalizer. 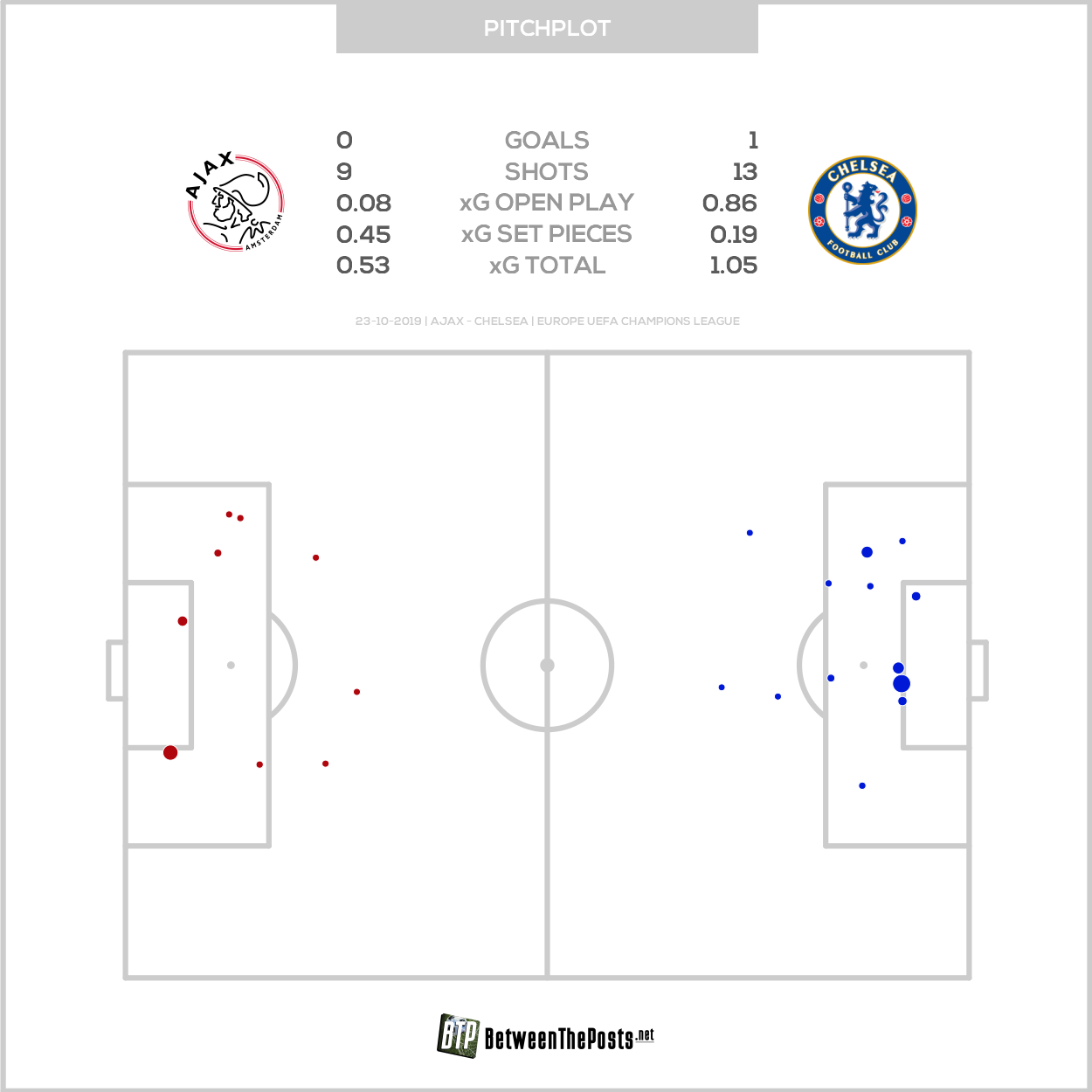 Considering both teams’ style of play, this game was remarkably tight. It was not end-to-end and with a lot of space available, it was all about pressing and counterpressing in closed spaces and limiting the opposition forwards. Chelsea have fought themselves back into the group, now leading. It should be noted that they missed their best player here in Kanté. To turn the game to mud like this in the Johan Cruijff ArenA is not something teams have been able to do against Ten Hag’s Ajax, and Lampard deserves a big compliment for his game plan.

From an Ajax point of view, this game raises more questions than answers. Compared to the games against Valencia and Lille, Ajax actually conceded less shots and expected goals, but the manager will be mostly worried about what happened at the other end of the pitch. However, after fifteen months of sheer madness in Europe, should Ten Hag be worried if his attacking stars fail to show up for one night? The next three Champions League games will provide the answer to that question.