A game-changing refereeing mistake in stoppage time proved decisive for the visitors, but were they worthy of their point? In a game so precisely planned out by each coach, defensively speaking, it was hard to separate the two sides, as highlighted by the manner of the two goals.

Paulo Fonseca’s injury-stricken AS Roma side have struggled through a stuttering run of form lately – drawing their last three games in all competitions, and winning just one of their last five matches. Still sitting atop of their Europa League group however, this seemed like a good opportunity to get back to winning ways.

With that in mind, Fonseca made three changes from the eleven that started their 0-0 draw with bottom-of-the-table Sampdoria last weekend. Edin Džeko, Javier Pastore and Federico Fazio were all given starts, on top of Gianluca Mancini being pushed forward into midfield to help facilitate the switch from a 4-2-3-1 setup to a 4-3-3 shape.

High-flying Gladbach sit atop of the Bundesliga table, despite suffering defeat on the road against Borussia Dortmund on Saturday. Contrary to such outstanding league form, though, is their position in Group J following a heavy defeat to Wolfsberger AC, and then a draw in Istanbul against Başakşehir. Albeit their toughest game of the group, a result here would be crucial to keeping their qualification hopes alive.

Coach Marco Rose also made three changes to his side from the weekend, which saw Alassane Pléa, Lászlo Bénes and Oscar Wendt make way for Patrick Herrmann, Florian Neuhas and Ramy Bensebaini respectively.

Gladbach are the bright starters

The visitors were the team that looked the liveliest of the two in this early kick-off. Their 4-2-3-1 attacking structure placed a particular emphasis on attacking down the right side – which is nothing new for them – but with the slight alteration in the way the attacking quadrant moved in relation to each other.

Predominantly, the aim was to access the nominal attacker inside between Roma’s midfielders – this was most often Breel Embolo. In relation to this was essentially a 2-2 shape with the forward-most attacking pair being split wide of each other onto either fullback.

However, this changed once Embolo managed to receive and, crucially, turn on the ball, as the far-sided forward would come across and the near-sided one would do the same, looking to exploit the space behind the fullback – Aleksandar Kolarov – who was asked to step up in Roma’s aggressive medium block. A medium block refers to a team that retreats in their own half out of possession, generally only disrupting their opponents some way into their own half. 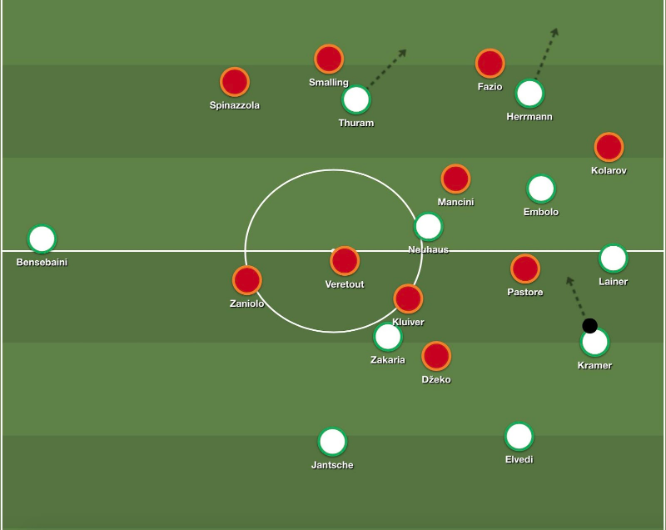 An image depicting the kind of route Gladbach were looking to take when aiming to progress the ball.

In the sixth minute, Gladbach managed to generate a half-chance at the second, post following Embolo’s receive-and-turn action to then set away Herrmann down the outside, who then found the left back Bensebaini at the far-post, but he made a hash of his chance.

The width provided by Gladbach’s fullbacks was quite important to the balance of their structure as the forwards remained very narrow and tight to their opponents throughout. Naturally, though, this left them potentially quite exposed to runs between them and the center-backs during counterattacks, which is exactly what Fonseca’s side hoped to exploit in their 4-1-4-1 defensive system, which involved Mancini stepping up to defend as a number six, and the two wingers driving through those channels following turnovers.

In their aggressive medium block, the advanced central midfielders pushed up closer in line with Džeko than anyone else, which enabled them to press onto the opposing center-backs quicker. This helped to close down balls over the top past their high line – and enlarge their cover shadow to block access into the forwards behind them.

For the opening third of the match, Gladbach were easily the most threatening side and had managed to create the best chance of the match; despite appearing offside on the replay, Bensebaini, from a set-piece out wide, managed to cleverly barge Fazio back to create a yard of space for a big chance from point-blank range. And, with no VAR to overturn the shot off the bar, it would have stood.

Looking further into open play chance creation, though, there was some substance but still relatively little. Gladbach were frequently trying to play into the space in front of the defense via Stefan Lainer’s passes from the flanks. This led to a decent shooting opportunity for Neuhaus in the eleventh minute, which highlighted the danger of his role as a far-sided number ten since it allowed him to play off the space left by either attacker directly ahead of him. Here, he was perfectly accessed thanks to Marcus Thuram’s timed run to drag inwards Roma’s right back, but Neuhaus’ drilled shot was poor and he failed to notice Bensebaini’s late overlapping When a wide player, most of the times a wing-back, runs outside to fill in the space left by a winger going inside with or without the ball, this is called overlapping. run.

Roma take the lead against the run of play

Roma had offered very little in attack, although most of that was down to the impressiveness of Gladbach’s high press. Their 4-2-3-1 shape looked to completely orient itself around the ball-side, with Neuhaus, the number ten, picking up the near-sided central-midfielder, and Herrmann moving across from the far-side to pick up the number six, as Embolo curved his press to block off the other half of the pitch. 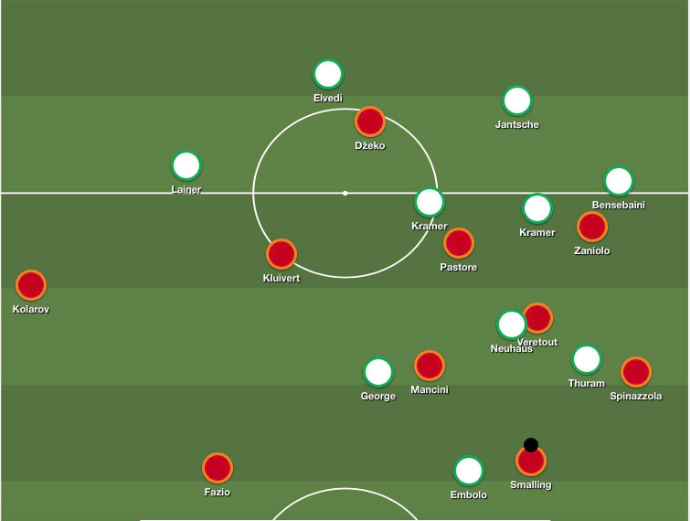 This forced plenty of turnovers early on, not that Gladbach ended up capitalizing on them all too well; a slight opening for a shot on the edge of the box for Embolo was about as good as it got. However, there were still times when Roma caught their opponents out.

Mostly settling into a 3-4-3 – as Mancini took up a more natural position as a defender – Roma narrowed their wide attackers to get on the ball inside, which seemed most threatening through Justin Kluivert in off the left. The Dutch winger being an inverted attacker enabled him to receive the ball and instantly wade off pressure by getting his body between the ball and his opponent.

In the thirty-first minute, Fazio’s ball across to a deeper central midfielder exploited a recurring issue for Gladbach, as their double pivot were rarely close enough together to shut down all deep options at once. From there, the midfielder could freely lay it into Kluivert, who drove inside and found Džeko narrowly through a central channel before his effort was quickly stopped and cleared for a corner.

Here was where the game tipped on its head, as an out-swinger whipped towards the near-post met the head of Nicolò Zaniolo, who had just managed to peel away from his marker ever so slightly, then making firm contact with the ball before directing it superbly in at the far-post.

The balance of the match then proceeded to change; Gladbach’s confidence slowly deteriorated, which was especially clear to see after the break.

There were two subtle adjustments from either side which ultimately frustrated Gladbach. The first being Gladbach’s own, which was to more consistently have the double pivot split to form a 3-1 shape instead of a 2-2 shape in buildup. The second, coming from Roma’s side, was to have the ball-sided center-back press up onto the attacking receiver.

Although the former created more opportunities for consistent access into Embolo, it was perfectly counteracted by the pressing center-back. Whereas in the first half when the Swiss striker had time to turn, he now did not, and neither did any other receivers like him. What this often meant was that they were stepping back onto the ball in fear of this, making it harder to control the ball, and harder to access the space between the lines since they were now back outside of the block.

To make matters worse, the quality of the passes was quite inconsistent.

The most damaging result of the change in shape was that it left them much more exposed to counterattacks. With the four attackers positioned behind Roma’s midfield, the far-sided wide attacker being pinned so high, the fullback on the far-side being so high and wide, and, most significantly now, the double pivot being so narrow and unsupported between all this, it meant Roma had an instant midfield overload when things went sideways for Gladbach.

In the fifty-fifth minute, Roma came close to punishing Gladbach for this, as Džeko received the ball down the channel between the their far-sided fullback and center-back, but he could not get his head up in time to notice the free man running towards the back-post, so instead drilled an effort from a wide angle inside the box, which was easily denied by the closest defender.

The majority of the second half was limited to what was said above, but without the quality from either side to make their strategies count. In fact, the first time we saw another chance of any substance was in the seventy-ninth minute, when substitute Lars Stindl highlighted the positive effect of having the U-shaped 2-2 attacking setup, following a ball drilled in deep from Lainer again. Neuhaus failed in the initial duel but Stindl was on hand to pick up the second ball, however, his effort in a good position lacked any power whatsoever.

The chances were beginning to flow for the first time in the match, the biggest of which occurred within the space of a minute as both were let down by poor defensive positioning from their respective fullbacks out on the far flank, which both enabled the far-sided runners to get in behind with ease..

It was not over for Gladbach yet, as it turned out. In the dying embers of the match, they were awarded a penalty following a quite disastrous stoppage time decision, which claimed Chris Smalling had handled the ball, when it had actually just hit his face. There could be no debate without VAR, and so Stindl stepped up, and so he scored, seeing the game end in a draw. 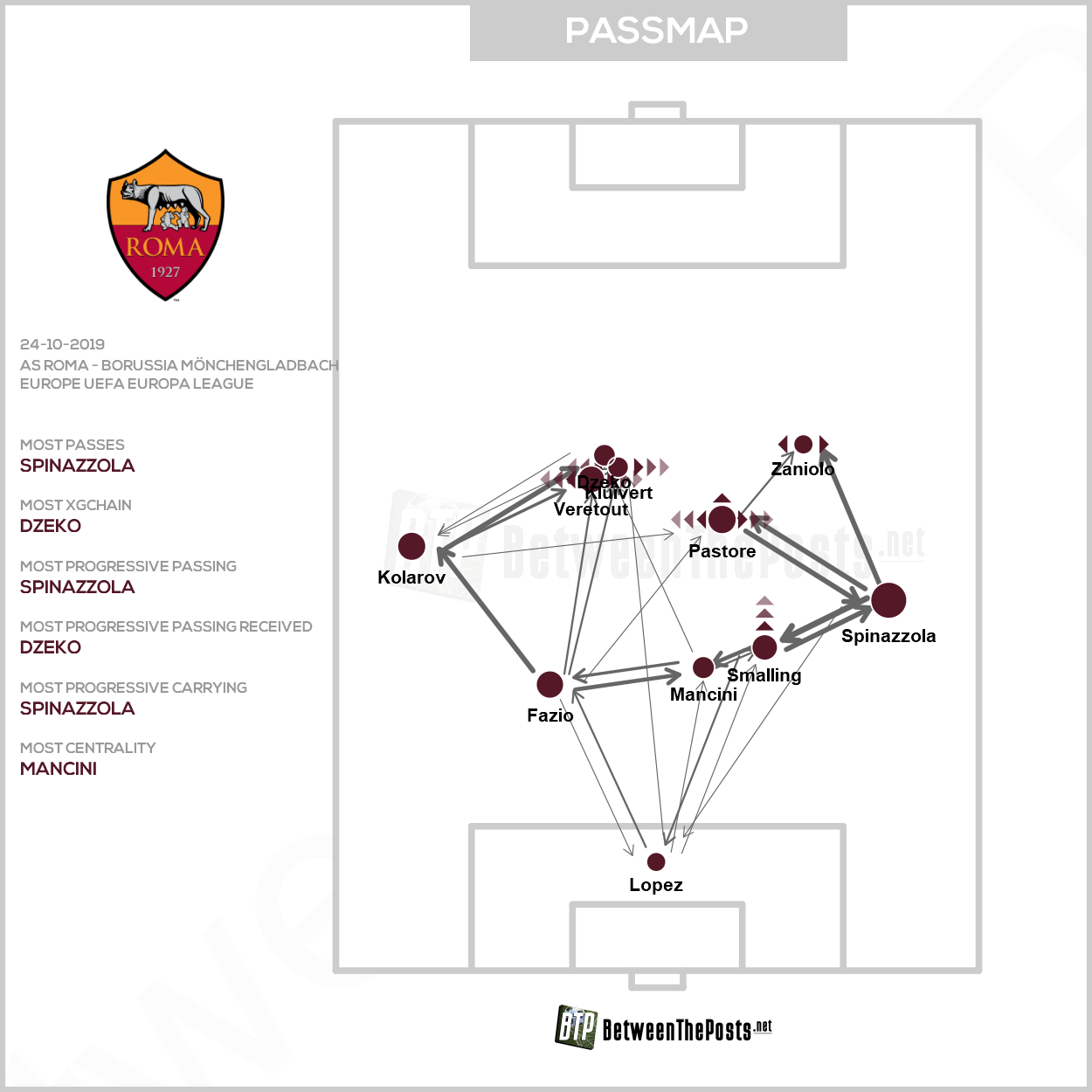 It is hard to say if either side definitively deserved the three points, so the draw should suffice. At the end of the day, Rose will not care in the slightest how he came away with a point in their toughest fixture, it was just about needing to stay alive in this group.

It does not get any easier for his side though,, which include fellow Europa League competitors Eintracht Frankfurt at the weekend, followed by another visit to Dortmund, in the cup, before travelling to play Leverkusen and then hosting the second of their two matches against Roma.

Fonseca’s side boast a similarly tough period of matches, as they host AC Milan and Napoli in the meantime. 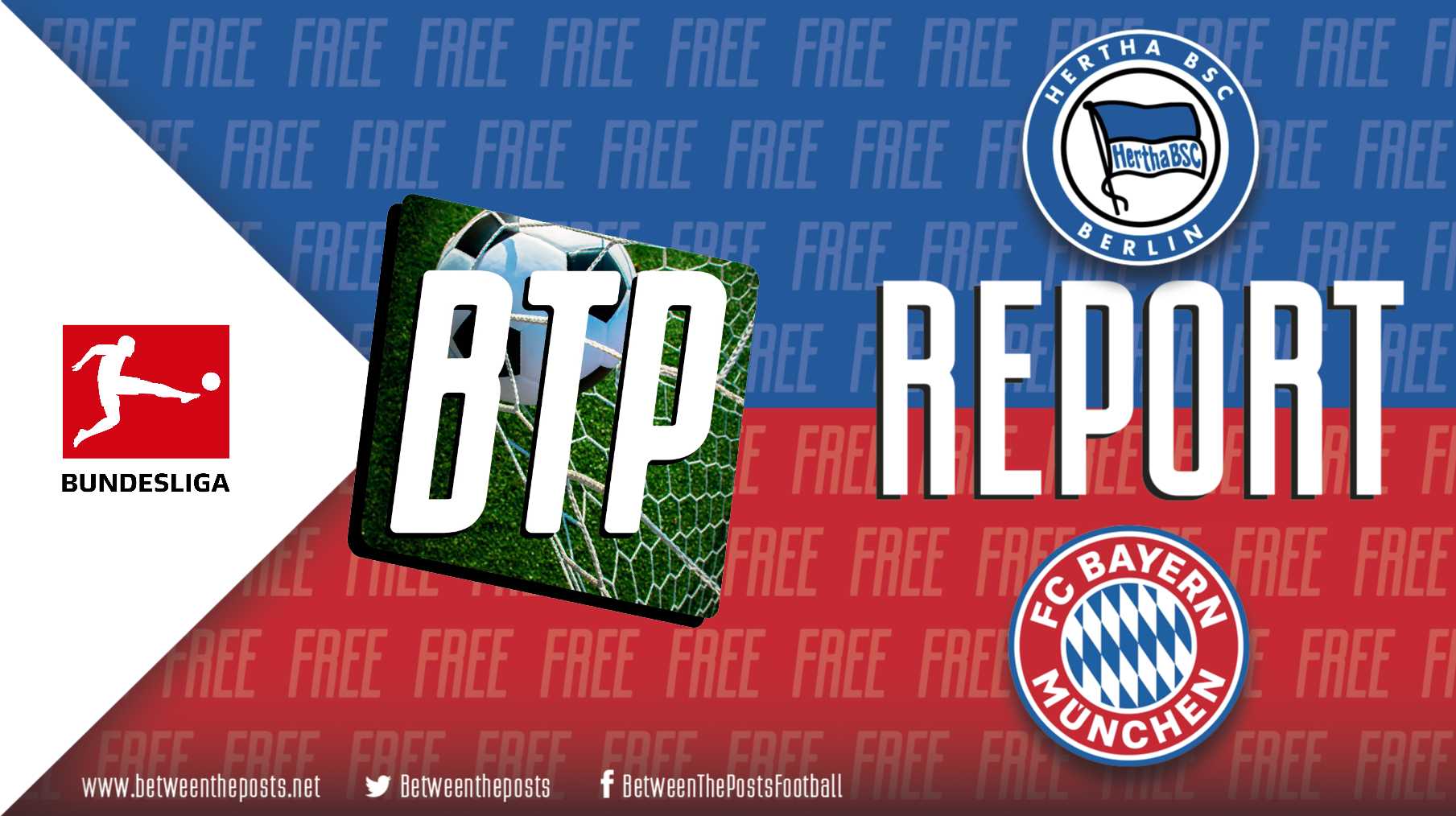 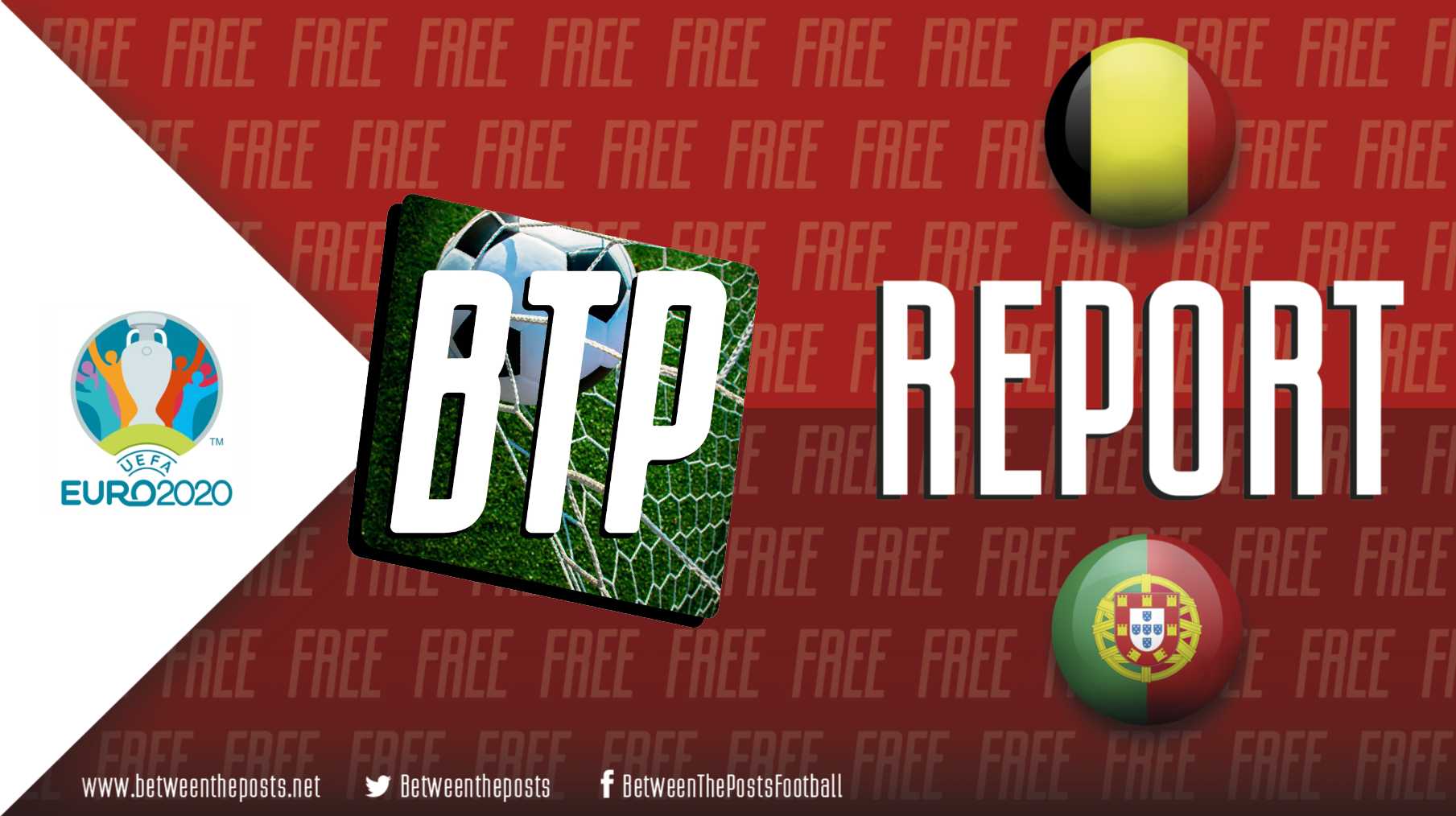