Both AS Roma and Inter Milan were subject to disappointing losses during the week in the Champions League, with both looking to get back to winning ways. In a high-intensity match, Inter were very strong in their high pressing and caused Roma lots of problems in possession. The hosts were not as effective off the ball, but did give Inter’s defense a tough time.

Having lost their previous two matches, Roma made five changes to their starting eleven. In their 4-2-3-1 formation, all three attacking players were changed, as Luca Pellegrini, Stephan El Shaarawy and Justin Kluivert dropped out for Alessandro Florenzi, Nicolo Zaniolo and Cengiz Ünder. Kostas Manolas replaced Federico Fazio in central defense with Robin Olsen starting between the sticks.

Luciano Spalletti made four changes to his team, following the 3-0 victory over Frosinone. Lautaro Martínez, as expected, was replaced by star striker Mauro Icardi. Matteo Politano and Roberto Gagliardini dropped to the bench replaced by João Mário and Ivan Perišić. Marcelo Brozović returned as well, to replace the injured Radja Nainggolan. 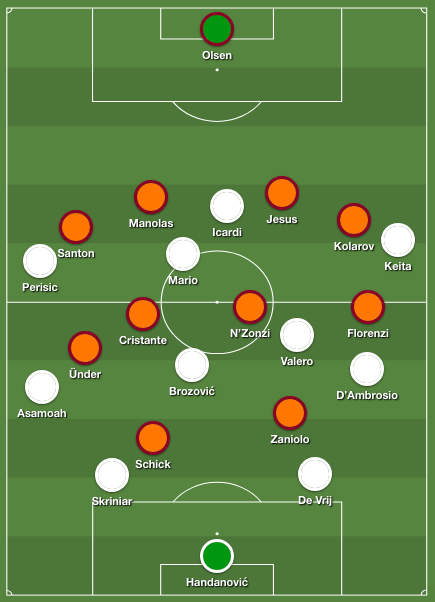 Inter were keen to impose themselves at the start of the match, and thus began at a high tempo. Their pressing was very effective in the opening exchanges and denied Roma the ability to create short combinations to move up the pitch. This was partly down to Inter’s heavy man-marking, which effectively reduced the number of options available to the player in possession. From a Roma perspective, their problems in possession were due to a lack of movements to open better passing lanes in deeper areas, lacking the presence to have any group combinations to progress the attack.

From their 4-2-3-1 base shape, Inter pressed aggressively, Valero being instructed to leave the line of midfield to add pressure. This often saw the Italians move into a 4-1-4-1 with Valero pushing alongside Mario, flanked by Perišić and Keita who retained positions to pressure the fullbacks if a pass was played across. In front, Icardi was focused on pressing the central defender that had the balls, whilst blocking acces to the other center-back.

When one of Perišić or Keita joined the first line in pressing, the midfielder on that side would cover the wing. If Valero or Mario pushed higher, the other would drop to stay connected with Brozović, who constantly moved across to cover the temporary vacated spaces. These pressing roles allowed Inter to immediately press Roma‘s first line of build-up as they constituted a second pressing wave to support Icardi up front.

Roma thus struggled to build-up, and became unwilling to play any shorter passes that had a chance of being intercepted immediately. Their possession was subsequently forced into direct, long passes and as a result, Roma’s midfielders were often found in higher central positions.

Despite these possession issues in the first half, Roma did create chances. A large share of their chances originated from transitional moments or wing combinations, using balls down the flanks as a method of chance creation. From these positions, they were able to get into several dangerous crossing positions, which Inter’s defense struggled to deal with. Roma also tried their luck from far out which troubled Handanović.

Roma spent more time in a medium block A medium block refers to a team that retreats in their own half out of possession, generally only disrupting their opponents some way into their own half., and did not try to press Inter that much. As the positioning by Roma’s forwards was often very flat, Inter were able to easily free up the dropping Brozović, allowing Inter a lot more control in the build-up phase.

Roma defended in a 4-4-2 against the ball. Being man-oriented, Roma often were unable to maintain an adequate level of compactness in the center. Inter’s midfielders made use of this, utilizing the intelligent positioning of Borja Valero, Marcelo Brozović and João Mário. That way, Inter were able to access the central areas quite regularly.

Although mostly in possession Mario operated higher up, the three midfielders would constantly interchange against the two midfielders of Roma, creating a three-versus-two overload. When one team has more players in a certain area or zone than the other team.

Brozović often dropped in between Roma’s midfield and attacking lines which caused all sorts of problems for Nzonzi and Cristante. As the dropping movement would force one of the pair to engage with the midfielder, one would have to leave their base position and push higher up the field. Therefore, at times Nzonzi and Cristante afforded territory ahead which meant the Brozović had more time on the ball to make decisions.

Furthermore, Mario would often exploit the spaces in the back of Nzonzi and Cristante’s. Mostly, this was done by moving diagonally towards the ball-side, in order to open an effective passing line. With Mario’ lurking behind the Roma midfield line, Inter managed to find a breakthrough. Brozović eliminated three players with a pass between the lines to Mario stationed in the number ten spaces. With time to turn with the ball, Mario picked his pass to the onrushing Danilo D’Ambrosio who’s low cross was converted by Keita Baldé to make it 1-0. 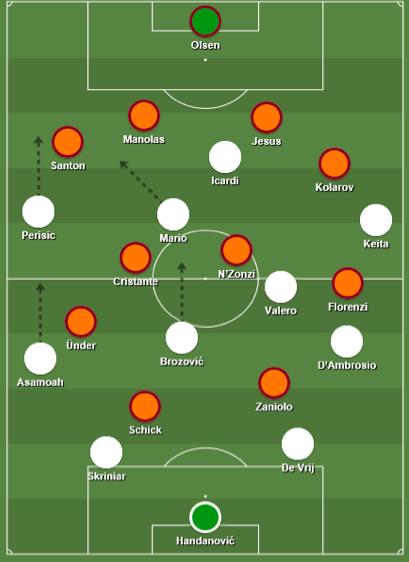 Mario occupying the spaces behind the double pivot of Roma.

Inter had success in central areas, but also had some good play on the wings going on. Inter’s left back Asamoah’s positioning caused all sorts of problems for Roma’s right side, which was targeted to get into chance creation. As Ünder would tuck inside when defending, Asamoah was left free down the left to receive a diagonal pass from Brozović or Valero. In these instances, Roma could not effectively shift across the pitch due to the positioning on their midfield and wingers, meaning they were unable to force Asamoah backwards into recycling possession with deeper players. In other instances, Perišić moved inside to drag his marker away from the wing. In doing so he opened the flank for Asamoah to dribble into for combination play against Roma’s last line.

On top of this, Inter found another way to open up spaces down the flanks with clever rotations. When the fullbacks were in possession, the winger would at times drop aggressively which was subject to heavy pressure from the opposing fullback. As Roma defended using man-orientations in midfield, they were unable to track Mario from entering the space. 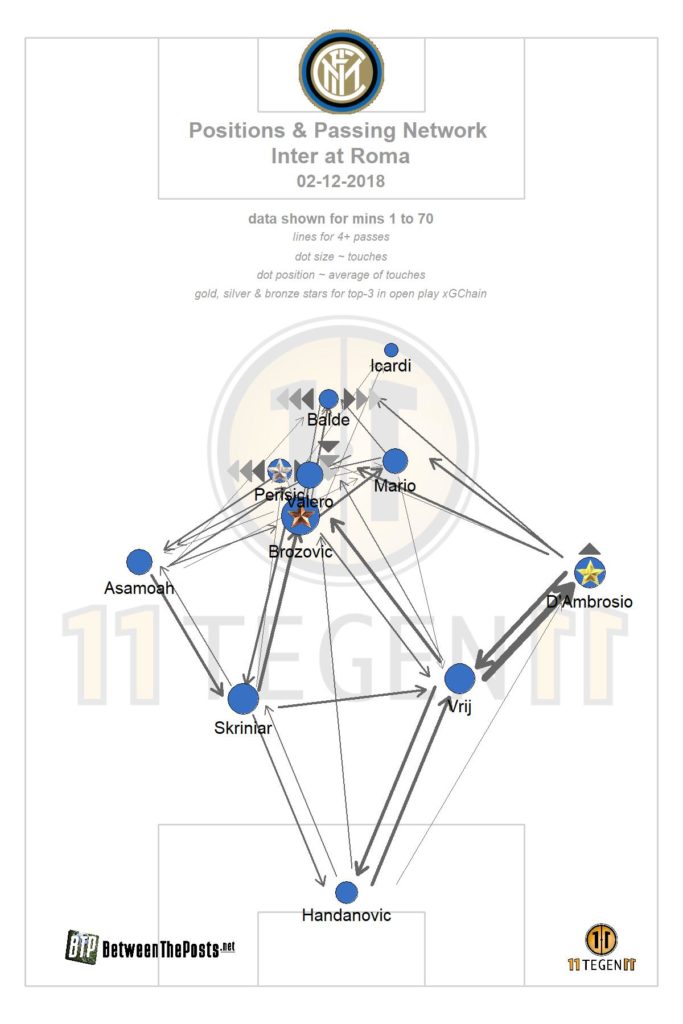 Second half: more Roma possession and loads of goals

After the interval, Roma began to sustain longer periods of possession spells, constructing their attacks from deeper areas and spending more time in the build-up phase. If they managed to progress the ball successfully, it was often due to one of the sixes dropping and offering an option to the defenders. A very well-known movement across Europe’s top leagues, but it did not happen in the first half a lot.

Furthermore, this was also partly down to Inter defending a bit deeper, with less aggressive pressing. Thus, Roma’s defenders were allowed much more time and space on the ball as Inter aimed to contain in their own half.

As the half progressed, Inter‘s timing of pressing movements was visibly slower without the ball and became easier to play through. Roma started to find gaps to outplay their pressing. As such, Roma equalized. Cristante was afforded more time on the ball than previous and played a vertical pass to Ünder who moved into the halfspace. Once on the ball, the 21-year-old thunderbolted a wonderful strike past the static Samir Handanović.

Icardi’s headed goal in the 66th minute gave Inter the lead, and Roma’s increased desperation to score created a slightly different dynamic in the latter stages. Di Francesco altered his team’s shape in possession, in search of a way back into the game. With the introduction of Justin Kluivert for Davide Santon, the hosts shifted into a three-at-the-back formation in possession, with Kluivert moving to the left-hand side. Ultimately, this was to add more numbers to the attack, allowing Roma to increase their presence in the final third. Thankfully for the hosts, the equalizer came in the 74th minute with Kolarov converting a penalty given away by Brozović.

Remarkably enough, after the game was tied again, neither team really took the initiative. There were some half-chances for both sides, Inter in particular, but it’s fair to say a draw was a good reflection of the final fifteen minutes and the game as a whole.

In a high tempo, exciting end-to-end game, a draw is just about a fair result. Inter were brilliant in their fluid build-up and regularly found ways to penetrate Roma’s defensive lines but did not take advantage of their openings. On the other hand, Roma caused a lot of problems against the passive defense of Inter. In the end, a draw seems like a fair result for both these sides chasing Champions League qualification in this year’s Serie A. 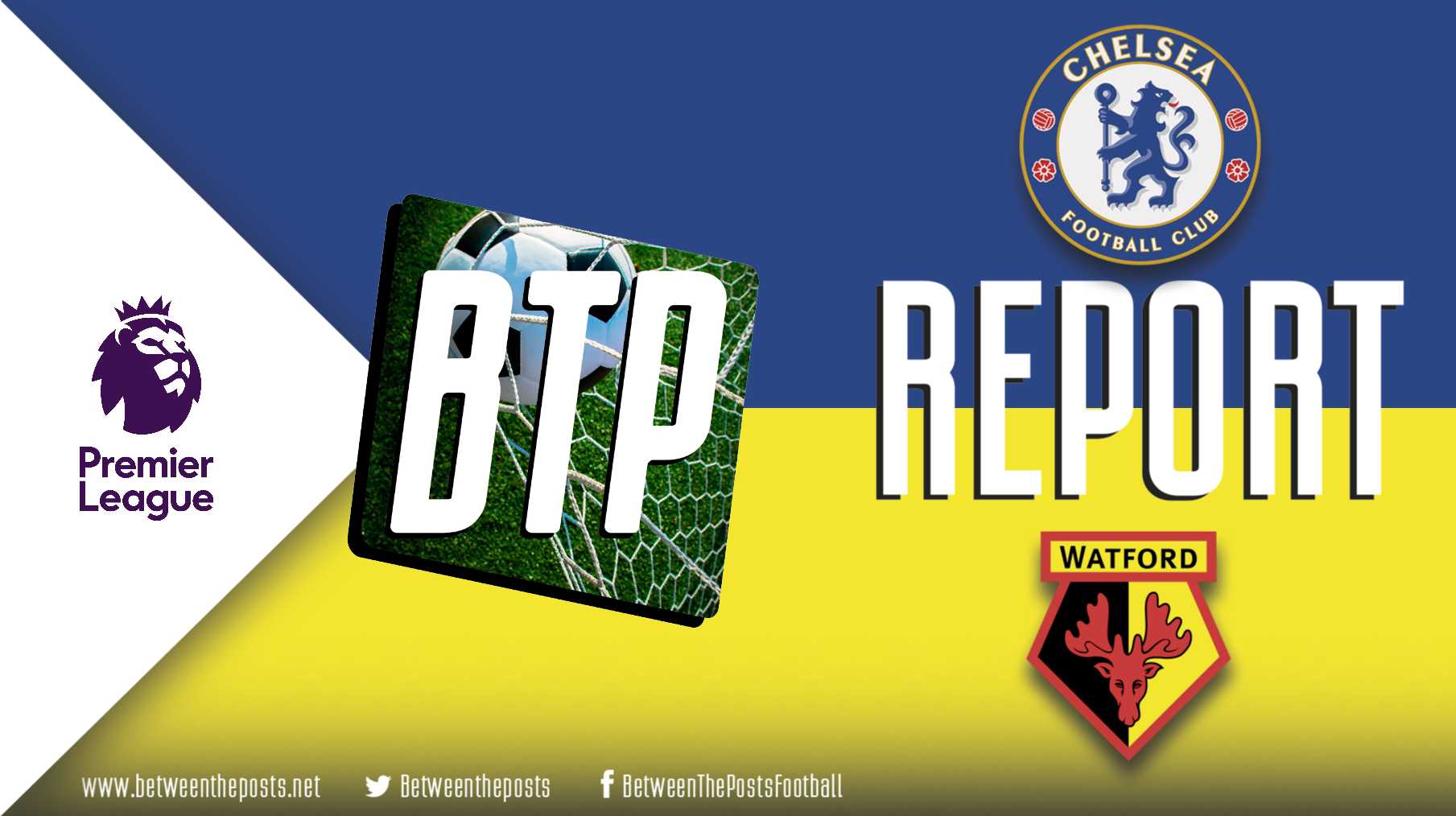 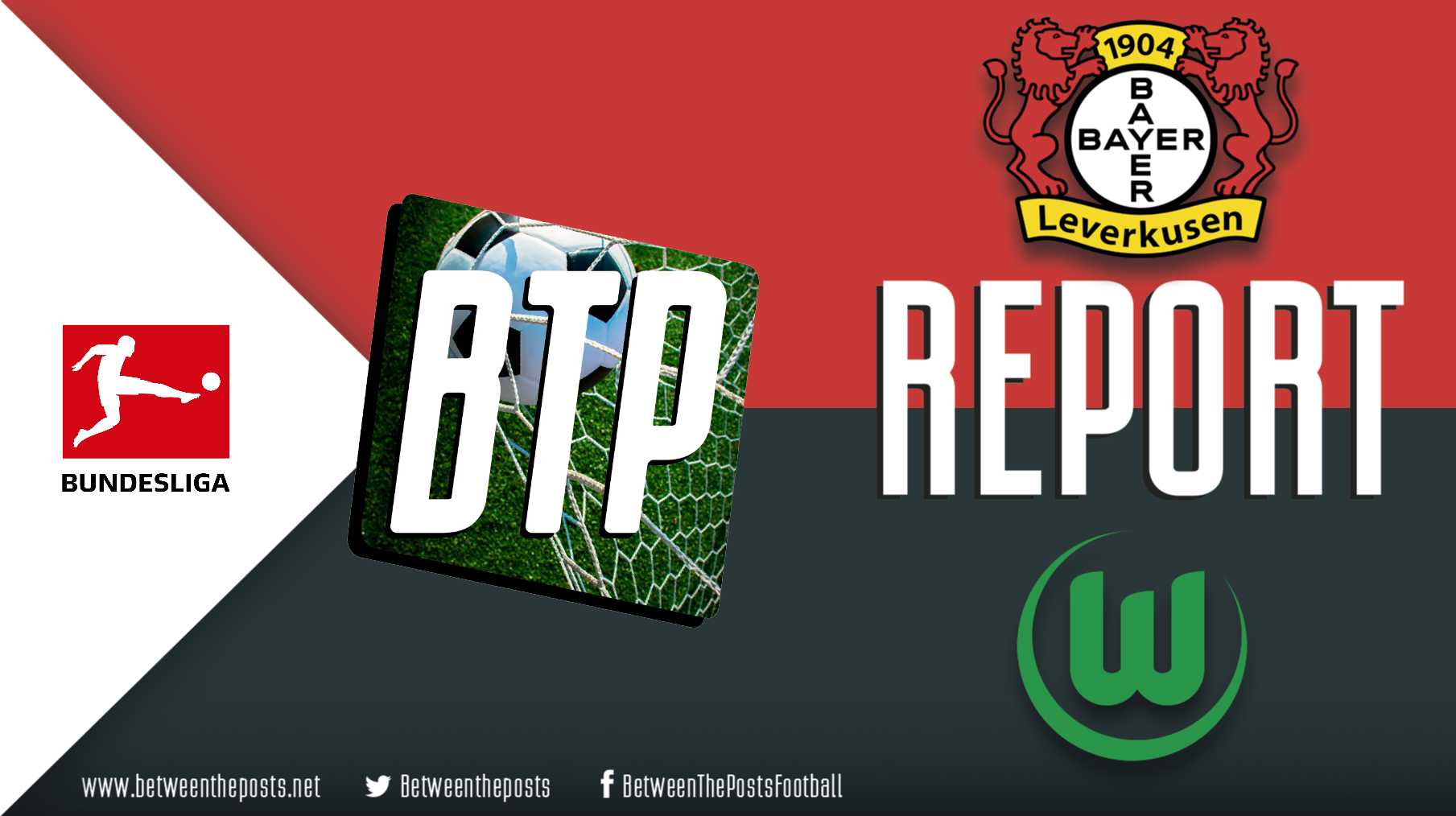