Athletico Paranaense dominated the first half with a variable possession game, overcoming the two-goal deficit of the first leg, with the second goal coming right after half-time. However, the hosts were not able to score the third goal after Grêmio were decimated to ten players, meaning this game was decided on penalties.

Grêmio won the first leg of the Copa do Brasil semi-final 2-0 at home, making them favorites to progress to the final. Although their league campaign is disappointing – Grêmio sit in eleventh position after finishing fourth last year – the guests managed to advance to the Copa Libertadores semi-final by overcoming Palmeiras. A successful cup run would brighten up an otherwise poor season. Manager Renato Gaúcho fielded almost the same eleven that advanced to the Copa Libertadores semi-final a week earlier, only Éverton was missing.

The hosts lined up in a 4-1-4-1 formation. Compared to the first leg three weeks ago, manager Tiago Nunes changed the starting line-up in four positions, which led to a whole new right side. It turned out to be the correct decision, as the right side – with the talented defenders Robson Bambu (twenty-one years old) and right fullback Khellven (eighteen years old) – was very dangerous in possession.

After a lot of interruptions in the first ten minutes, both teams needed some time to find their flow. The guests set up in a 4-4-2 formation that could be seen in the past games as well. The strikers stayed narrow to deny any passes into the number six Wellington. Matheuzinho and Rômulo looked to defend man-to-man against Paranaense’s interiors Leo Cittadini and Bruno Guimarães. Man-orientations could also be seen on the wings with left winger Pepê following the movements of Khellven.

As this is Grêmio’s usual defensive setup, Athletico Paranaense could work on different ways to exploit their defense. In possession, the 4-1-4-1 shape transformed into a 3-1-5-1 formation. Therefore, Khellven moved up on the right wing and while his counterpart – left fullback Márcio Azevedo – stayed deep and narrow, forming a back three with the two center-backs. The right wing was occupied by Rony. Nikão had a free role and often dropped deep from his right wing, looking to create numerical superiority in midfield, in order to exploit the man-orientations of the opposition’s midfielders. 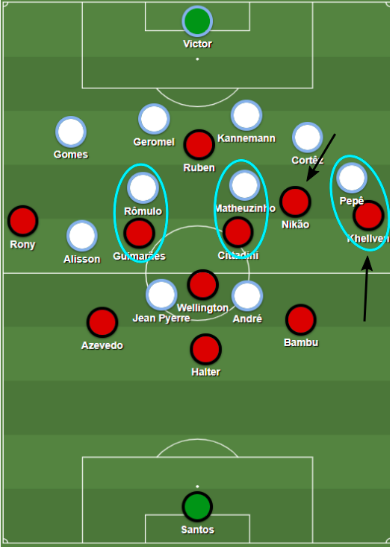 The 4-1-4-1 formation transformed into a 3-1-5-1 shape. Nikão dropped from his usual position to create overloads against the opposition’s midfielders.

Not only did the formation transform into a 3-1-5-1 shape, it was also asymmetrical. This created different opportunities for Paranaense to advance on either side, even though both were quite effective. On the right, Khellven pushed up and pulled Pepê with him, creating space in front of Bambu. The young center-back could use this space to advance with the ball behind the opponent’s first line of pressure. Due to the man-marking of Rômulo and Matheuzinho, Guimarães and Cittadini were able to open the passing lane to the striker Marco Ruben.

However, there were situations where all of Guimarães, Cittadini and Nikão were positioned in the right halfspace, If you divide the field in five vertical lanes, the halfspaces are the lanes that are not on the wing and not in the center. Because there is no touchline like on the wing, players have the freedom to go everywhere. But this zone often is not as well-defended as the very center. This makes it a very valuable offensive zone to play in and a lot of chances are created by passes or dribbles from the halfspace. decreasing the space for Bambu to advance and, in addition to that, closing the passing lane to Ruben. The idea to get behind Grêmio’s back four was to pull Bruno Cortêz out of his position, Khellven would then run in behind the defense.

The hosts preferred the right side in position to advance the ball, but the left side was still important. It was mainly used to attract pressure by Grêmio to create more space in the midfield. Therefore, when Azevedo was in possession, Guimarães would show for the ball, pulling Rômulo with him. If the ball was shifted to the right side after that, Rômulo did not have the time to come back.

Creating a good structure in possession often is not enough to dominate the game if the players are too static. This was not the case in Paranaense’s attacking game. The players often used positional rotations to exploit the man-orientations and create free players. These movements were mainly used on the wings. Another important reason was the idea to attract pressure on one side and then shift the ball to the other side. This stretched Grêmio’s formation and opened up spaces.

However, the hosts struggled to advance the ball into the opposition’s box. The first goal came after Léo Gomes needed treatment on the sideline and Grêmio was temporarily reduced to ten men. A quick attack against the unorganized defense created two shots from inside the penalty area. Paranaense transferred the dominance from the first into the second half. The second goal started with a rotational movement on the right side and a shift of play to left winger Rony. His cross was converted by Ruben.

These two situations created the only three shots from inside the box in the first fifty minutes, though, with just three shots coming from outside the penalty area as well. However, after scoring the second goal that tied the semi-final in total, Athletico Paranaense allowed Grêmio to have more possession.

Grêmio has a hard time in possession, but can rest from defending

In possession, Grêmio’s 4-2-3-1 shape transformed into the well-known 2-3-4-1 formation that is common when attacking in 4-2-3-1. The fullbacks pushed up, the wingers moved inside and number ten Jean Pyerre dropped deeper. The center-backs are not responsible for the buildup and are expected to just pass the ball to one of the three midfielders in front of them. The hosts had a good tactical plan against that buildup. Out of possession, they set up in a 4-4-2 formation as Cittadini played next to Ruben in the first line. The strikers blocked the passing lanes to the central midfielder, leaving only the pass to one of the wider players open. 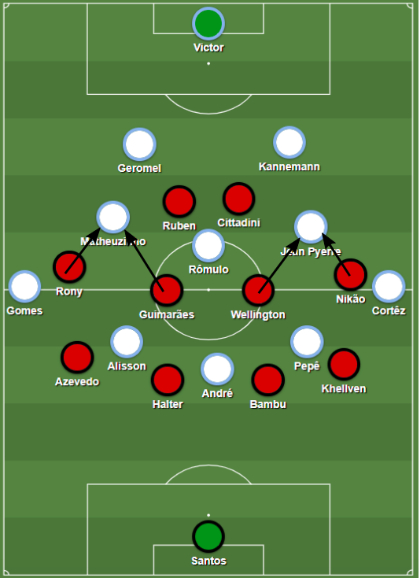 Athletico Paranaense set up in a 4-4-2 formation against the ball. After Grêmio played the ball to one of the wider midfielders, the hosts were able to deny any ball progression.

Because it was easy to anticipate those passes, either the central midfielder or the winger would rush out of his position to pressure the opponent. Grêmio struggled to advance the ball in their possession spells because Paranaense defended very well. However, the guests could recover from defending.

Grêmio gets decimated to ten players, Paranaense fails to dominate

This rest was ended by Walter Kannemann, though, who saw the red card after a brutal tackle in the sixtieth minute. Manager Renato Gaúcho was forced to adjust the formation to 4-4-1. Subsequently, Paranaense saw a lot of the ball again and tried to score the third goal which would send them to the Copa do Brasil final. However, the possession spells were way poorer than in the first half.

This was partly down to Grêmio, which sat very deep in their own half and did not let them attract to open up spaces. The problems were mostly down to Paranaense’s own game, though. The attacking game was not as fluid as it had been in the first half. The players moved less and positional rotations became rare. They also did not try to move the defense by shifting the play. All these problems result in a lot of crosses which are played too early therefore stay without danger.

The feeling arose that the players knew that they are the favorites to advance to the final now and desperately tried to score the third goal. The structural issues were aggravated after Tiago Nunes subbed Wellington off for Marcelo Cirino who played as a second striker. Perhaps the idea behind this substitution was to have a second striker in the box who is able to convert one of the crosses. It did not pay off, though, and the game ended without another goal.

Athletico Paranaense eventually advanced to the final after converting all five penalty kicks. Pepê was the last of the ten players to stepped up to the penalty scored and saw his shot saves by Santos.

After the game was interrupted a lot in the first ten minutes, Athletico Paranaense went on to dominate the match until the fiftieth minutes, where they scored the second goal to tie the semi-final. Tiago Nunes’ side used a lot of positional rotations, tried to attract pressure and shift the ball to the other side. They were able to open up Grêmio’s defense, but eventually struggled to progress the ball into dangerous areas.

After giving possession to the guest’s after the second goal, Paranaense could not use their fluid attacking game when Kannemann was dismissed with thirty minutes to go. Instead of moving the ball around – like they did in the first half – to stretch Grêmio’s defense, they opted for a lot of crosses. However, the first half should give them confidence for the next matches. The team played very good football and the young talents Bambu and Khellven looked very good.

Grêmio on the other side must handle the next disappointment as they were completely outplayed in the first half. Now the Copa Libertadores is the only way to save an otherwise awful season. 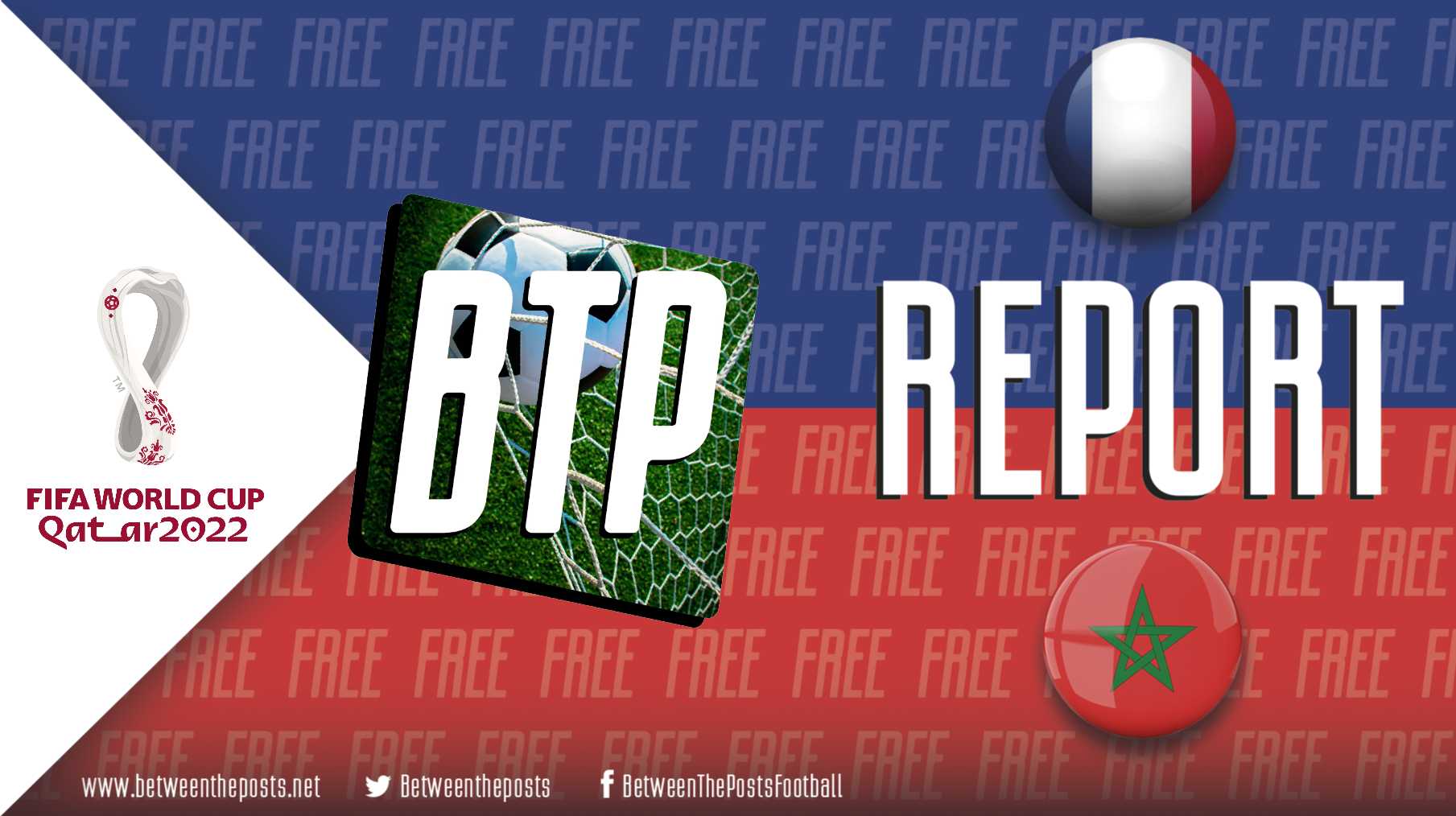 France – Morocco: France Forge Their Way Back To The Final (2-0) 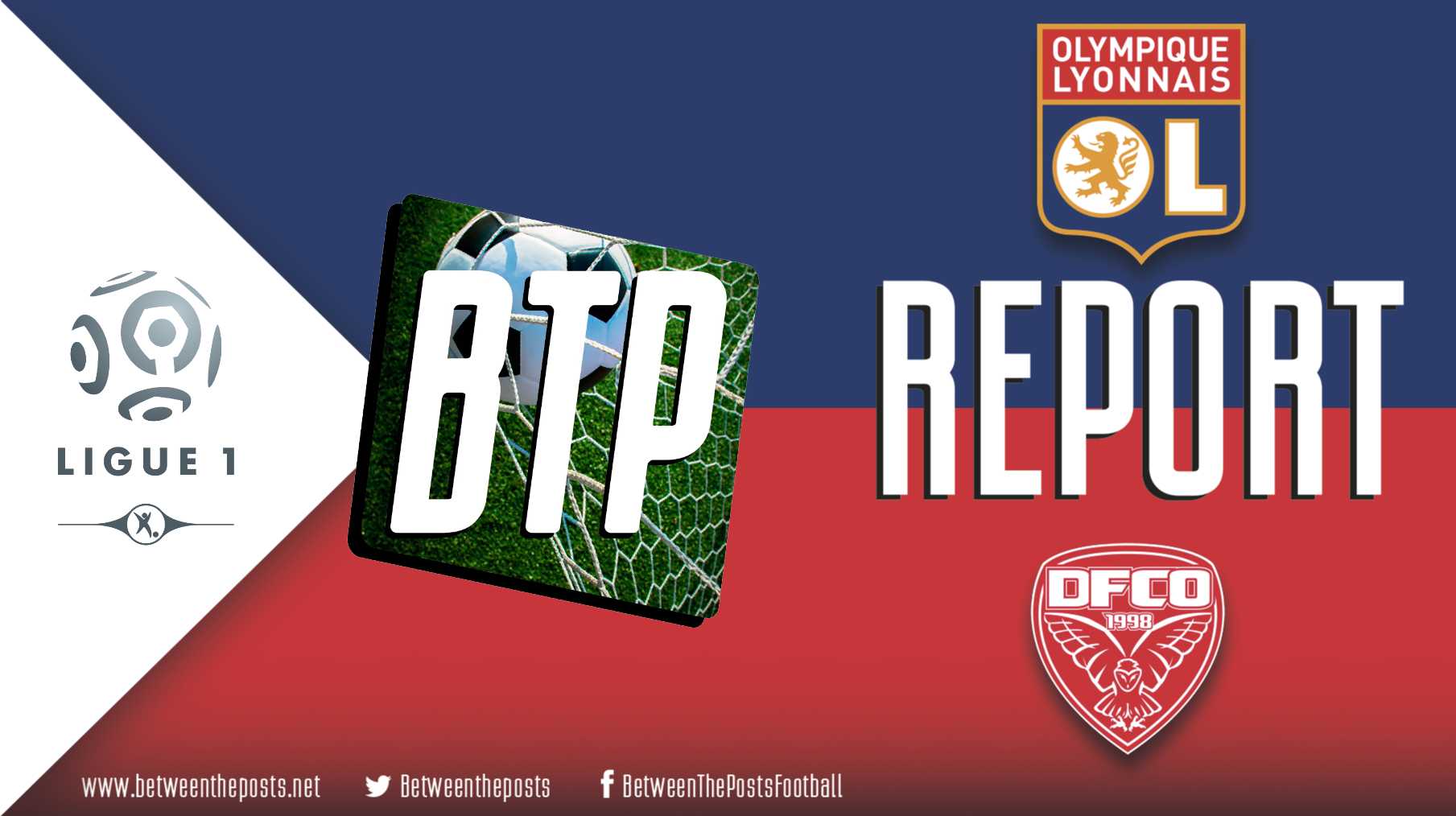