The task of a coach is to make the most of the players he has at his disposal. Christophe Galtier, now at the top of the pile in Ligue 1, has not lost sight of this purpose. Decentring himself from media attention, he liberated his stars to remind France of the killer instinct they had to fear.

The food chain is an essential facet of survival in the natural kingdom. Organisms fight for energy sources, but hierarchy dictates who lives and dies. The prey must acknowledge its fate at the hands of the top predators. In the ecosystem of elite football, one such creature calls the French capital home.

The Champions League has long governed the optics of a nine month campaign for PSG. Central to this perception of the club is the state of affairs on home soil. The Qatari takeover has not signaled a total monopoly on Ligue 1, but it has become a title that is theirs to lose at the outset of a new season. Splurging cash on global stars, their lure to the best of the rest in France only affirms this hegemony.

Lille are the latest victims of the French footballing food chain. Christophe Galtier was the brains behind an abrupt ascent, usurping the perennial champions on the way toward glory in 2021. Twelve months later, they were 31 points adrift of the summit, finishing in tenth spot. And to rub salt in the wounds, Galtier himself is now in charge in Paris. Where will they find the fuel to threaten again?

The hosts have turned to Paulo Fonseca, bringing him out of the wilderness more than a year after his exit from Roma. He has usually organized his men in a 4-2-3-1 formation, which he used here. Four new faces came into the fold off the back of a 1-1 draw away at Nantes. Among them was Ismaily, who bagged his first goal for the club last week. Further afield, Mohamed Bayo was not in the squad. Therefore, Jonathan David moved inward off the right flank and led the line in front of Yusuf Yazıcı.

Galtier, too, has a system in place. The 4-4-2 block synonymous with Lille has made way for a 3-4-1-2 shape. He also picked the same eleven that beat Montpellier last time. Sergio Ramos, Marquinhos, and Presnel Kimpembe formed a back three, while Nuno Mendes and Achraf Hakimi were the wing-backs. Marco Verratti and Vitinha sat in midfield behind Neymar, Lionel Messi, and Kylian Mbappé.

King Kylian holds onto the limelight

Mbappé’s antics against Montpellier grabbed the headlines during the buildup to this fixture, and he wasted no time making his mark. From kickoff, he scanned for Messi, who sprayed an aerial pass over the back four. The forward was too quick for the defenders, lifting the ball above the onrushing Leonardo Jardim and into the net. The Parisians were on the scoreboard within a mere eight seconds.

The goal is just beautiful, you can see the desire and the effect of Galtier’s method and when it pulled off you can see in the celebration that everyone was unified for such an incredibly worked goal and the admiration, we never saw this before never… what a team performance! pic.twitter.com/edvrVXgJJ6

Although they had fallen behind early, the home team did not give up the fight. Indeed, a quarter of an hour into the contest, they had kept 49% of the ball. Fonseca has already established a flexible central focus for their attack. A 2-2 box structure from the back, where the double pivot interacts with the two central defenders, sets the tone. Ahead of them, David dropped into the right halfspace in the buildup phase, while Yazıcı drifted to the left. Maybe this strategic focus urged an adjustment from Galtier.

The PSG manager adopted a 3-4-1-2 pressing scheme last time out. Messi stayed behind a front two of Neymar and Messi. The trident could mark up against a single pivot and the pair of center-backs, retreating into a 5-2-3 block. But thanks to the four central options in the midfield, Lille broke through the double pivot of the same shape Nantes deployed. So here, Neymar formed more of a 5-3-2 setup, operating a little deeper than Messi from the right. This minor tweak offered PSG more central cover. If a forward needed to press outward more intensively, it was also favorable the role went to Neymar. 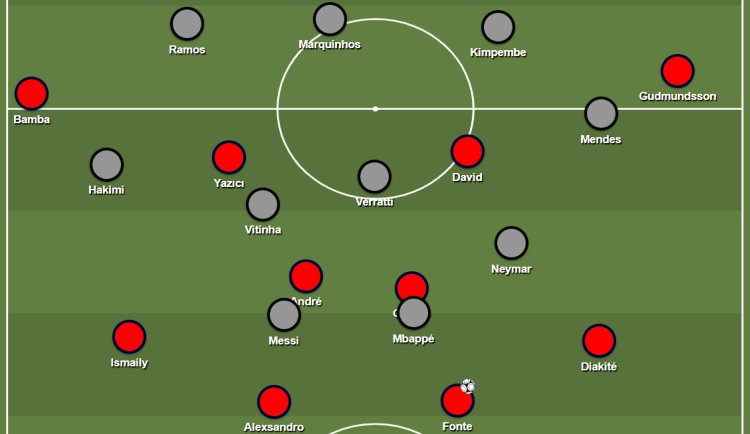 Nonetheless, Lille’s courage to build up play from the back astutely exploited faults from the Parisians to open up pathways to breach the halfway line. To add to this first wave of progression were ideas to penetrate within the final third. If either Angel Gomes or Benjamin André faced forward with the ball, David loaded the ball near side to receive between the lines. Along with the rotation on the left, where Ismaily roved inside or outside Jonathan Bamba, Lille’s patterns favored the center and left halfspace.

25th minute: offensive sequence from Lille. Ismaily and Yazıcı run ahead of Bamba, whose inability to advance prompts recirculation to André. Gomes moves inside centrally, and Gabriel Gudmundsson makes a diagonal run, pinning Kimpembe. David can receive and turn to dribble between the lines.

Alas, their efforts were in vain because of the class of the visitors. A similar distribution of roles emerged in their use of the ball as in their last match. Verratti roamed as a lone six in front of the back three, whereas Vitinha ventured forward as an eight from the right. He supported the organization of the game or rotated out on the flank with Hakimi and Messi, whose diagonal playmaking from deep in the right halfspace quickly gained space for the Parisians. Mbappé mainly stayed in the center to give depth to the structure, while Neymar creatively interpreted a more central role from the left halfspace.

The dynamism of the wing-backs also shone. Hakimi’s drive to the goal with his electric pace and the passing of Mendes came to the fore. Either they broke through directly from switches of play, worked in tandem with the forwards to rapidly combine down the ball near side, or pinned the fullbacks to let Neymar and Messi dribble into the final third. The strategic construct strongly suits this crop of talent.

Three further goals before half time paid homage to this threat. Messi orchestrated an attack from back to front in the center, Hakimi latched onto a through ball from Neymar to exploit a right sided overload, and the Brazilian dispatched after PSG turned over the ball from a high press. Lille were far from woefully inferior here. Instead, a much better group of individuals could put them to the sword.

Hakimi goal. Neymar assist too easy for him 😎 pic.twitter.com/9BghtzXX9l

The stars continue to align

The second half picked up where the first half had left off. The front three kept working off of each other, ruthlessly racking up the goals. Mbappé dummied a strike in the box, freeing Neymar to bag a second brace of the season. Bamba’s immediate response rewarded Lille’s endeavor, but the security of a four goal lead let Galtier introduce fresh legs with time to spare, using all five substitutes. Amid a hectic schedule, PSG will be grateful for such affordances. And the scoring spree was far from over.

The guests still threatened on the break. Verratti and Vitinha could wriggle their way out of danger, while the explosive running of Mbappé and creativity from Neymar was a dynamic tandem in the final third. The former set away the latter on the left in the 66th minute before haring to the penalty area. A rasping finish doubled Mbappé’s tally on the night. He went on to seal a hat-trick, caressing a through ball from Neymar into his stride and slotting to the right of Leonardo Jardim. Quality kills.

The idea of Messi, Neymar, and Mbappé in the same front three alarmed the rest of the world in the summer of 2021. Mauricio Pochettino hinted at how one can best fit the pieces of the puzzle near the end of the last season, but Galtier has taken the next step to create a coherent outfit in months. If elite stars are in a suitable strategic environment for their strengths, a coach does not need complex tactical guidelines to carry the burden on their behalf. At this rate, PSG will canter to yet another Ligue 1 title.

Lille will not be the last victim of this configuration of PSG. While the defeat was no shock, losing by a margin of six goals can dent the confidence of an outfit adapting to a new manager. So, it was fitting Fonseca praised the bravery of his men after the final whistle. Their invention on the ball from start to finish showed how the team has taken to his methods. Room for development remains defensively but staying true to this style of play suggests they will be a side to look out for as the campaign continues. 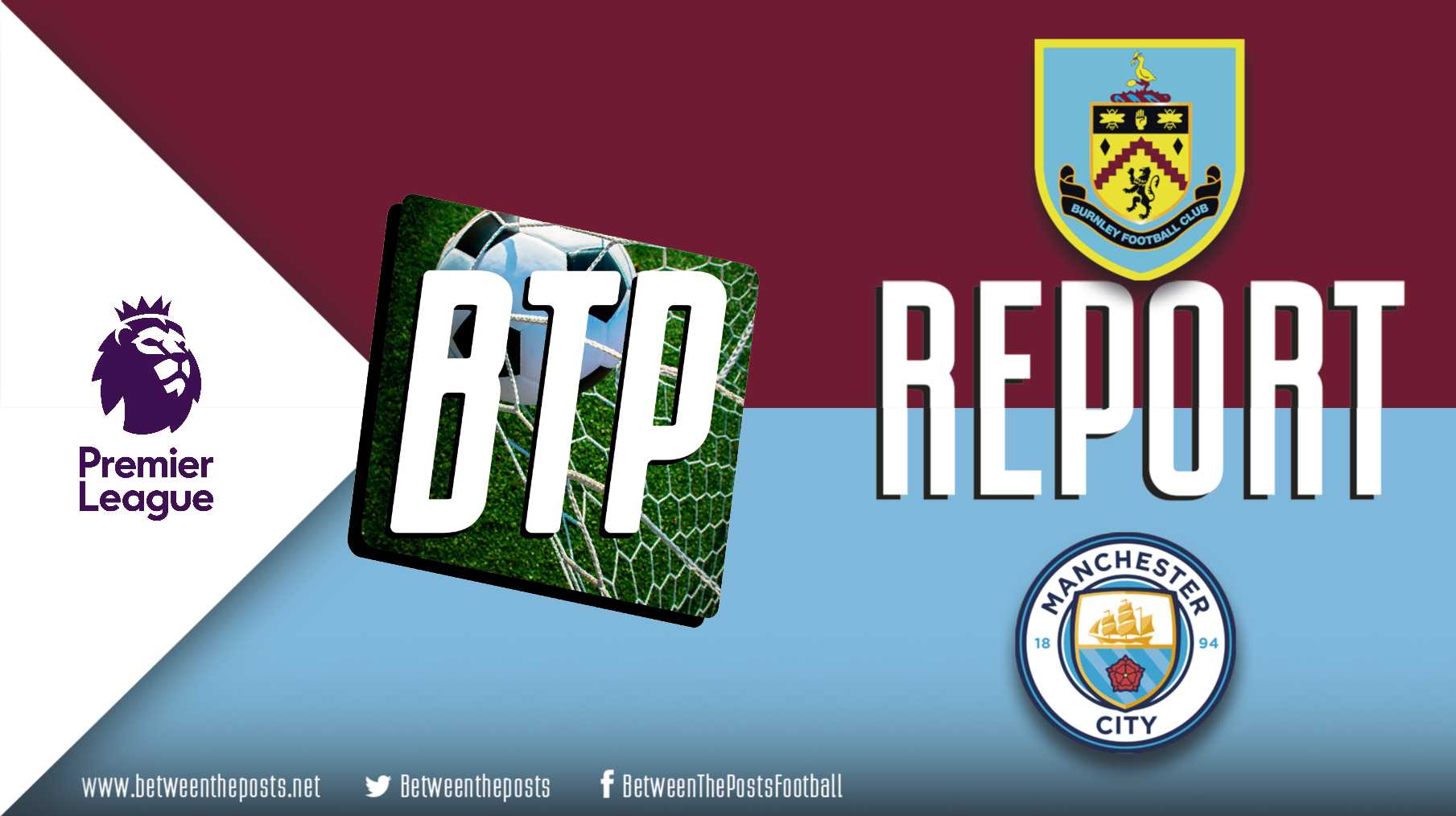