Portugal have failed in their attempts to hold onto the crown. When asked to move out of their attritional style, attempts in breaking through an open Belgium fell flat on its face, as their buildup issues were aggravated. Belgium got the job done, but the same questions failed to be answered.

Knockout football tournaments can alter narratives like nothing else in the game. If either the current competition holders or the world’s number one ranked team were to leave before the quarter-finals, it would massively fall short of expectations. Yet this is the reality of Belgium and Portugal’s EURO 2020, as well as knockout football in general; there is no next time, only ninety minutes.

Belgium was one of three teams to come out the group stages with a 100% record, but with defensive deficiencies and some mechanical issues as baggage. Their wing-backs offer dynamism in the build, but this is a team whose reliance on Kevin de Bruyne is clear. His positional freedom anchors midfield-to-attack like no other, spearheaded by Romelu Lukaku in the best form of his career.

In the group of death, Portugal’s start to EURO 2020 was a lot more labored. An unbalanced setup in possession had been solved by Renato Sanches, but Fernando Santos still has not found solutions to their limited shot creation from open play. Add in a passive defense, which isn’t that compact, and you are left with a team that shows structural problems every single game.

Roberto Martínez brought back the big hitters into his 3-4-3 system, after rotating vastly versus Finland. Thibaut Courtois and Thomas Vermaelen remained between the sticks and in defense, with Jan Vertonghen and Toby Alderweireld alongside him. Thomas Meunier and Thorgan Hazard started as wing-backs, whilst Axel Witsel and Youri Tielemans were selected as the double pivot. Two central midfielders next to each other. The team was completed by Kevin de Bruyne, Eden Hazard and Romelu Lukaku as the front three. Not bad eh…

Santos continued to field his team in a 4-3-3 / 4-1-4-1 formation. Rui Patrício started in goal, with a defensive line of Diogo Dalot, Pepe, Rúben Dias and Raphaël Guerreiro in front of him. João Palhinha was preferred as the single pivot, with Renato Sanches and João Moutinho next to him. Bernardo Silva, Diogo Jota and Cirstiano Ronaldo all retained their places, who have started in all of Portugal’s games in the tournament.

Belgium’s flexibility was created by a vast amount of movements inside of the field. As one of the central  midfielders remained deep, another would move away from the ball to create angles for the wide center-backs – this was more prominent with Tielemans, who moved between the lines. This enabled De Bruyne and Eden Hazard to become part of the rotation, both being able to receive in the halfspaces.

They were afforded such space with Palhinha unable to cover two players and Portugal’s center-backs being less aggressive in stepping out. 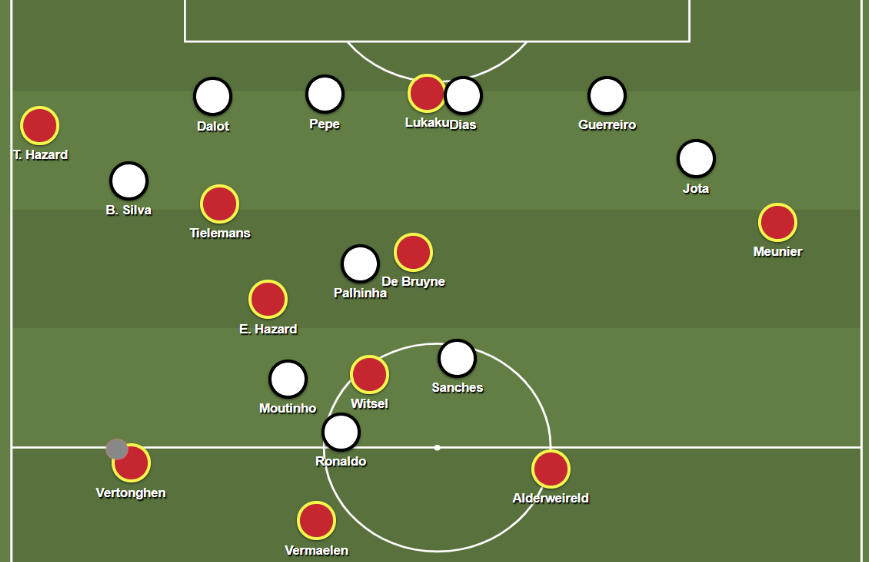 8th minute: Example of Belgium’s flexibility inside of the field and against Portugal’s 6-3-1 / 6-1-2-1 shape, with both wingers who dropped significantly deeper than the central midfielders.

Portugal’s defensive organization remained very passive, with limited moments of pressure on the ball, but their positioning of their wingers put them at a disadvantage. Both Bernardo Silva and Jota dropped deep once Belgium had the ball in their half, which saw Portugal’s shape resemble a 6-3-1 / 6-1-2-1 formation during phases. Although this did double up on Belgian wing-backs, spaces opened for their tens to receive, as the center-midfielders were relied upon to engage in pressing moments.

As a result, Belgium had the ball but were incapable of penetrating through the block. Options between the lines clustered onto the left side, whilst Lukaku remained opposite to the ball and did not make runs behind the center-backs, to pull them even further. They had no attack from the right or patterns down the left to break through.

What made Portugal’s approach all the more frustrating was the counterattacking chances that didn’t form. Against a Belgium buildup as expansive as this, Ronaldo was the only viable option on the break, with the wingers so deep that they were incapable of making a transition happen.

As the first half continued, Portugal got more on the ball but still struggled to create any shooting opportunities. Their 4-1-4-1 formation evolved into a 4-2-4 / 2-4-4 shape, due to the movements between Sanches and Moutinho. As one would collect, the other would push high up the field, but in comparison to the Belgian duo, they did not move into the positions where they could become accessible further afield. 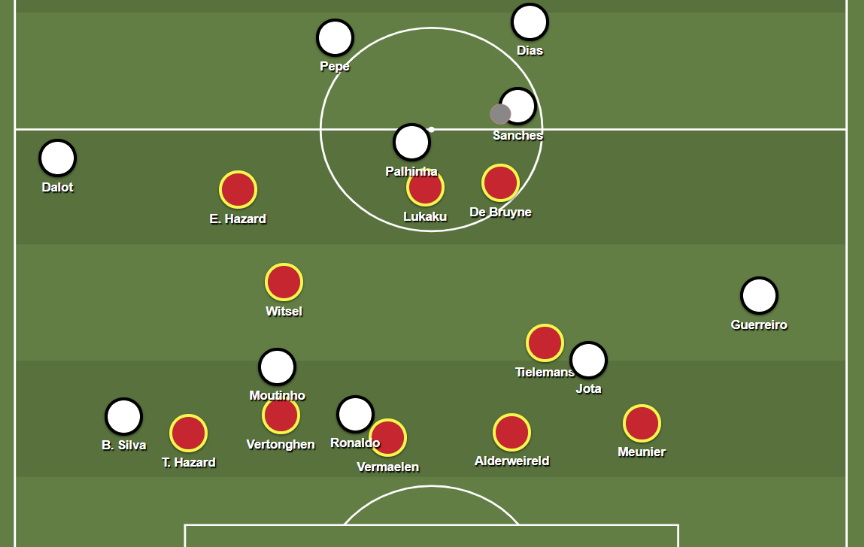 25th minute: Passing phase from Portugal, which highlighted their tactical woes. No options between the lines, suboptimal positioning amongst forwards and no routes other than to go direct towards the box.

When Portugal got the ball past the halfway line, their dysfunctional approach came more into view. There were no options between the lines, whilst the passiveness from their fullbacks meant Bernardo Silva and Jota were responsible for holding the width. Due to their poor setup, Ronaldo dropped out of the striker position to link with combinations down the channels, but this did not affect getting the ball forward because there were no runs in behind.

Portugal’s only pattern was to hit the ball long towards Ronaldo and hope he could fashion something. Belgium remained in their 5-2-3 defensive block quite comfortably, although disconnects between the central midfielders could be made, when Jota or Sanches pushed into the halfspace. Portugal had no move where they could exploit this area.

Minutes before half-time, Belgium struck, in a rare phase where Portugal decided to apply more pressure than usual. This enabled a long ball from Vertonghen and trademark back-to-goal play from Lukaku, to drastically open space for support. After a messy exchange, Meunier moved the ball back towards the left, before Thorgan Hazard smacked the ball from distance into the far corner. 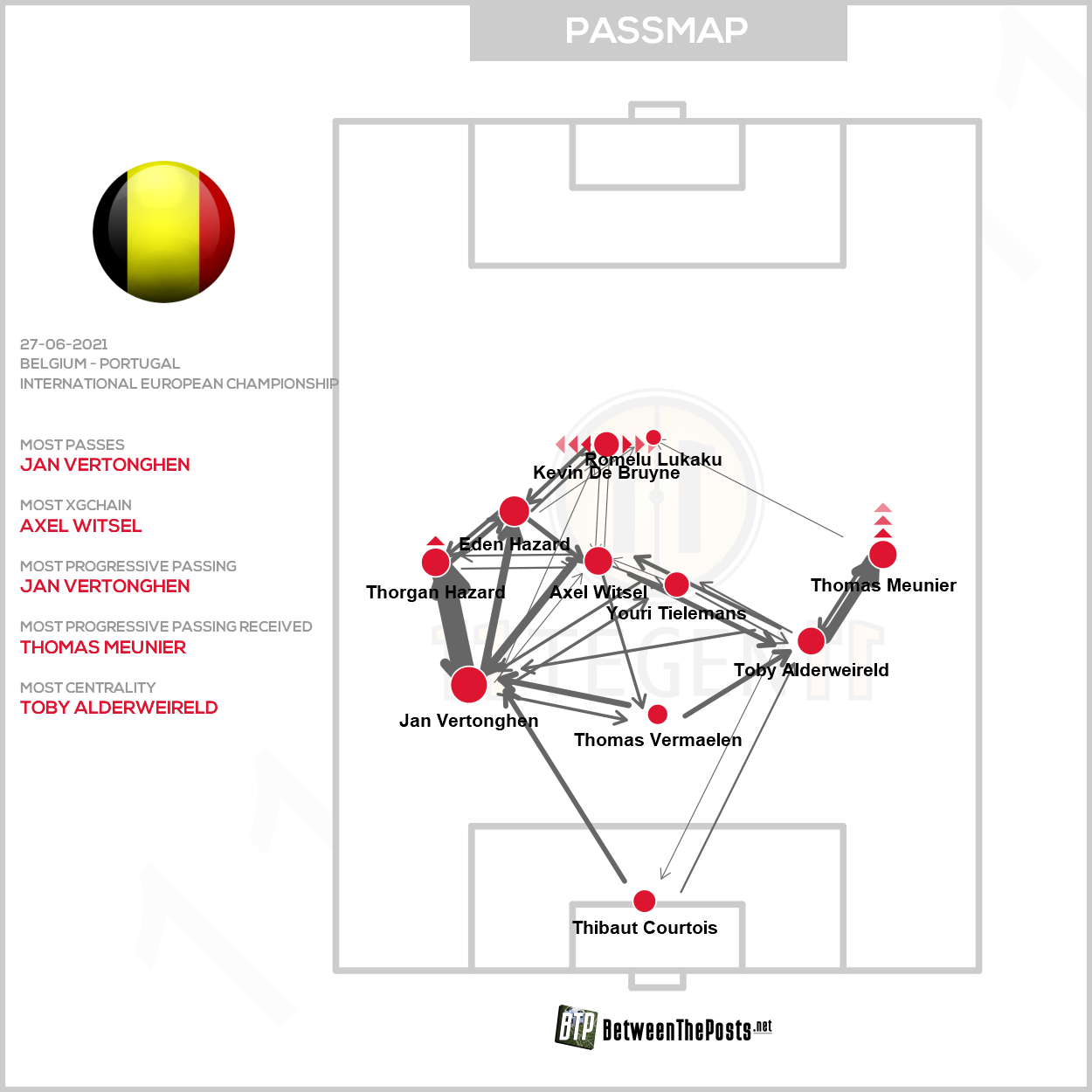 Game-changing events at the start of the second half

The first ten minutes of the second half produced two moments that changed the game state. Portugal had already gained more possession, but an injury to Kevin de Bruyne ensured that long passing spells were no longer accessible for Belgium. Dries Mertens came on, whose operation on the right of the attack is very different to De Bruyne’s. Mertens was glued to that side of the field, more of a second striker to Lukaku than a roaming ten.

Santos’ first two changes also made sure that Portugal was going to get more possession. Bruno Fernandes replaced Bernardo Silva, while João Félix finally got his first minutes of the tournament, who came on for Moutinho and took up a much more central position in the setup. Portugal recorded 65% of the possession in the second half.

Though bringing on ball-hungry attackers was a logical solution, the positions these players took up led to a bizarre and fruitless approach. Félix moved out of the center to receive more towards the right of the field, whilst Fernandes was exclusively out on the right wing unless a cross came in from the left.

Portugal looked more dangerous, Ronaldo’s roaming led to the ball being moved forward and there were actual options inside of the penalty area, but they still looked dysfunctional. Although masses of space were open down the channels, their only form of shot creation still came from crosses or shots from long distance. 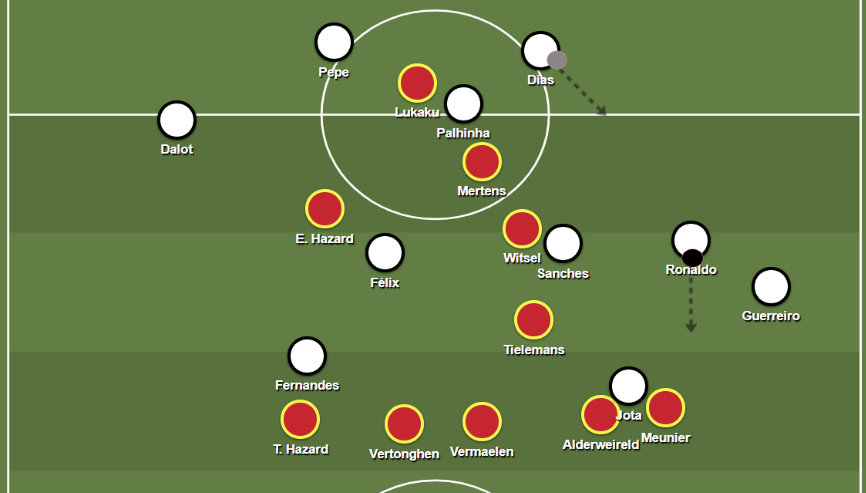 61st minute: Dias able to make a pass (Grey ball) to Ronaldo, which followed from an up-back-and-through combination, who has dropped out into the left channel. Ronaldo carried the ball (Black ball) towards the box and made a forward pass, but bad positioning between the lines and no patterns led to no chance being created. The sequence ended with a wild long shot from range.

Poor decision making also played a part in these situations, even though crossers were in space, with little pressure on them, they still looked to hit the ball long rather than produce shorter combinations. Belgium sat deeper, but without an extra midfielder or pressure from wing-backs, they were left massively open as a result.

The next change saw André Silva replace Jota for the last twenty minutes. He became another body inside the penalty area, whilst Félix was moved out towards the left as the game progressed. This is when fouls broke up the flow of the game, Portugal embracing the dark arts, even though it killed more time for them and did not produce better attacking moments.

The last roll of the dice saw Sérgio Oliveira deployed as the single pivot and Danilo Pereira as a third center-back, which enabled Pepe to surge as far forward as he has done in around ten years. The one-dimensional form of attacking eventually stuck and produced one or two moments. Dias forced a good save from a corner, Guerreiro hit the post following a second phase from a cross and Silva came close, following a flick-on.

Although Portugal’s shot quality remained suboptimal, the game management from Belgium made crossing situations very accessible. Defensively they were not compact and immense work from Lukaku kept continuous pressure away for brief spells. Belgium got the job done, but a convincing performance still awaits. 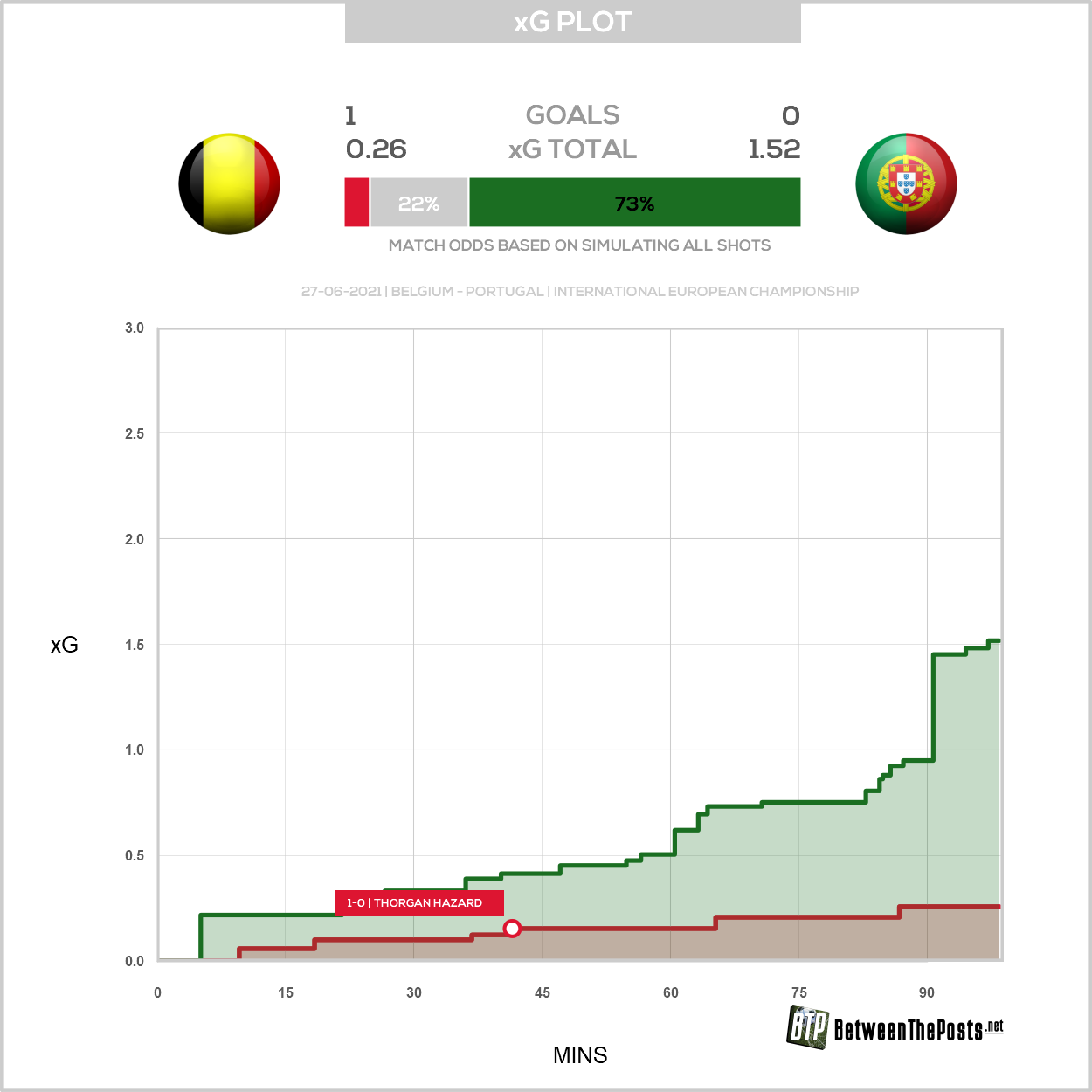 A total of 23 shots conceded is the highest since their win over Brazil in the World Cup. This wasn’t a good defensive performance from Belgium, but their progress isn’t entirely down to luck either. They still possess immense quality, but a matchup against a well-oiled and functional system in Italy isn’t a great one for Martínez’s squad.

Portugal’s approach throughout the tournament hasn’t left much to desire, as clear issues were not addressed. Nevertheless, a short period of time and in the world of COVID makes these issues difficult to clear up. What Fernando Santos has achieved is immeasurable for Portuguese football, but the next generation of incredible talent needs a new direction. 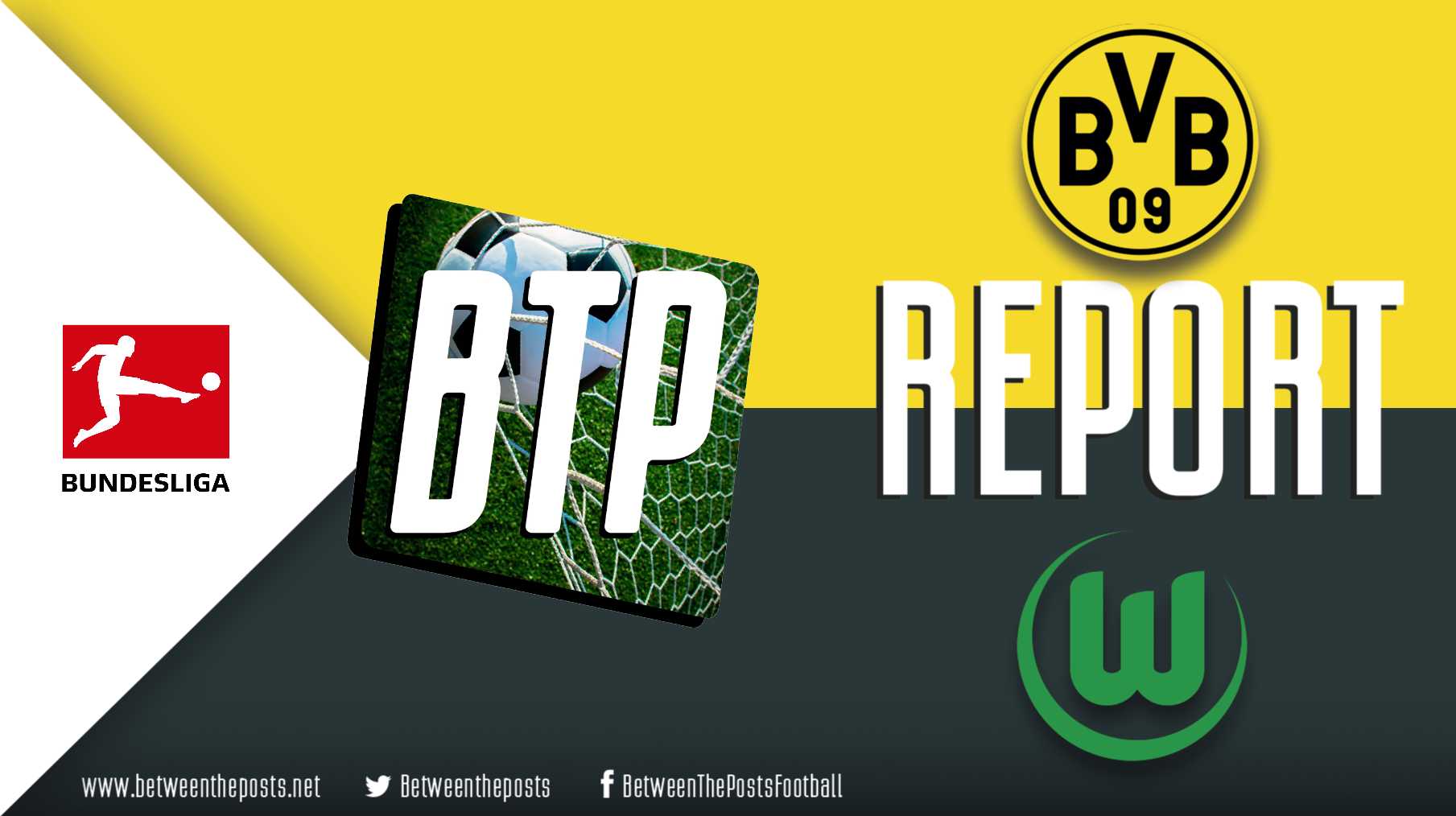