Marco Silva and Graham Potter made constant adjustments to their sides, as the two managers looked to correct sloppy play at both ends of the pitch. In the end, it was Brighton who made fewer errors – benefitting from a Lucas Digne own-goal at the end of a sumptuous attacking move.

Last round’s 2-0 win over West Ham United gave Everton manager Marco Silva a slight reprieve from the intense scrutiny he has been under for much of the season. Scrutiny borne of the club’s continued stagnation under his stewardship. The victory was Everton’s first in four games and featured the reintroduction of Tom Davies and Djibril Sidibé to the starting eleven.

A clean sheet and the club’s first victory since the start of September was reason enough for the manager to stick with his preferred 4-2-3-1 formation, as well as much of the same eleven he used against West Ham. Unfortunately, Silva would have to go without Yerry Mina, who was still recovering from injury. As a consequence, Mason Holgate took over the Colombian’s role alongside Michael Keane at center-back – the tandem flanked by captain, Lucas Digne and the aforementioned, Sidibé. The holding midfield roles remained with Davies and André Gomes, while Iwobi started centrally, as the number ten with Walcott on the right side of midfield and Bernard preferred on the left. Meanwhile, Richarlison was selected to play the role of the main striker.

Contrary to his managerial counterpart, Graham Potter’s revolution at Brighton has largely been met with positivity. The former Swansea manager has looked to imbue the side with more attacking verve and has expressed a desire to play out of the back, while at the same time making Brighton more tactically diverse.

Under Graham Potter, Brighton are picking up a bit more points compared to last year.
What's more impressive, though, is how the offensive and defensive numbers have both improved. Brighton look like a pretty solid mid-table team in underlying numbers. pic.twitter.com/RbcVDtNzrD

Against Everton, Potter decided to go with a 4-4-2 shape, one he has used with regularity this season – especially since the injury to Belgian forward Leandro Trossard. At the back Brighton fielded Lewis Dunk and Adam Webster in central defense, while Martín Montoya and Dan Burn slotted in at right and left fullback, respectively. In midfield the flat-four consisted of Pascal Groß, Dale Stephens, Steven Alzate, and Davy Pröpper. The strike duo of Neal Maupay and Aaron Connolly was preferred up front.

Everton began the match using Davies and Gomes as a double pivot 4-2-3-1 is one of the most frequently occurring formations in football. The two most defensive midfielders are called a ‘double pivot’. and trying to build from the back. Unfortunately, the duo was unable to progress the ball well against Brighton’s stubborn 4-4-2 defensive shape. A significant factor in this failure was Iwobi’s movement in the number ten role, as he failed to open up space in the middle of the pitch, or distract Bernard’s marker, as the winger looked to come deeper and help in the buildup.

The vistor’s inability to progress the ball forced them into recycling possession in risky areas, as Maupay and Connolly put pressure on Keane and Holgate in central defense. It was this exact circumstance, in the fifteenth minute, that led to a turnover and subsequent foul at the edge of the Everton box. The tantalizing free kick was lined up by Groß, who struck a fierce shot past the wall and straight through the hands of Jordan Pickford. The shot gave Brighton an early 1-0 lead and once again called into question the often suspect goalkeeping from England’s number one.

The defensive frailties did not end there, as only five minutes later Brighton fell asleep during a routine corner – allowing Richarlison to ghost his way to the front post and head the incoming cross. The ball ricocheted off Webster’s head on the way to goal and past keeper Matt Ryan – tying the match.

Despite the two early goals, the match slowed considerably with Brighton experiencing the same issue progressing the ball. It was not until Bernard suffered an injury in the 27th minute, forcing on Gylfi Sigurdsson, that the half began to develop some offensive life.

Sigurdsson assumed his role in the number ten position – pushing Iwobi out wide where he took over for Bernard. The Iceland international immediately brought more nuanced movement to the Everton midfield and started opening up areas into which Iwobi could drop and help progress the ball. In addition, Sigurdsson’s movement help to clear space for Richarlison, who started to drift across the front line – finding space behind the advancing Brighton fullbacks.

Sigurdsson’s effect on the Everton buildup.

Meanwhile, Brighton swapped Alzate with Pröpper and in so doing immediately became more comfortable in possession. The newly formed double pivot of Pröpper and Stephens was able to pick better passes and finally get Maupay more involved in the match and put pressure on the Everton backline. Nonetheless, both sides failed to execute in the final third The one-third of the pitch that is closest to the opposition’s goal. and often misplayed their final balls.

In the second-half both club’s buildups continued to run hot and cold and as a result the two side’s defenses started looking for more direct routes to the front line. For Everton this meant finding Richarlison, who tended to drift behind the advancing Montoya, as Burn started to remain in deeper position in order to protect against the counter. Meanwhile, for Brighton the default tended to be to look for Alzate on the wing, or to try long balls into the feet of Maupay, who had become more isolated since the start of the half.

With his side struggling to find their footing, Potter made a double switch in the 66th minute – bringing on Trossard and Ezequiel Schelotto for Groß and Montoya respectively. The adjustment was followed closely by Everton making a double change of their own – Dominic Calvert-Lewin and Fabian Delph taking the places of Alex Iwobi and Theo Walcott.

For Silva the changes quickly paid dividends, as in the 74th minute Holgate was allowed to step into midfield and send a sumptuous through ball into a striding Calvert-Lewin, who struck the ball back across goal – beating Ryan on his far post and giving Everton the lead.

Chasing the match, Trossard was given a great deal of freedom to operate on Brighton’s left wing and the Belgian forward began to give Sidibé trouble with his movement and more varied attacking talents. In marking Maupay and Connolly, Sidibé had become comfortable holding a more central position, but Trossard’s willingness to tuck into the halfspace, If you divide the field in five vertical lanes, the halfspaces are the lanes that are not on the wing and not in the center. Because there is no touchline like on the wing, players have the freedom to go everywhere. But this zone often is not as well-defended as the very center. This makes it a very valuable offensive zone to play in and a lot of chances are created by passes or dribbles from the halfspace. as well as take the ball out into wide areas –  where Sidibé was forced to respect his lethal crossing ability – changed the complexion of Brighton’s offense. 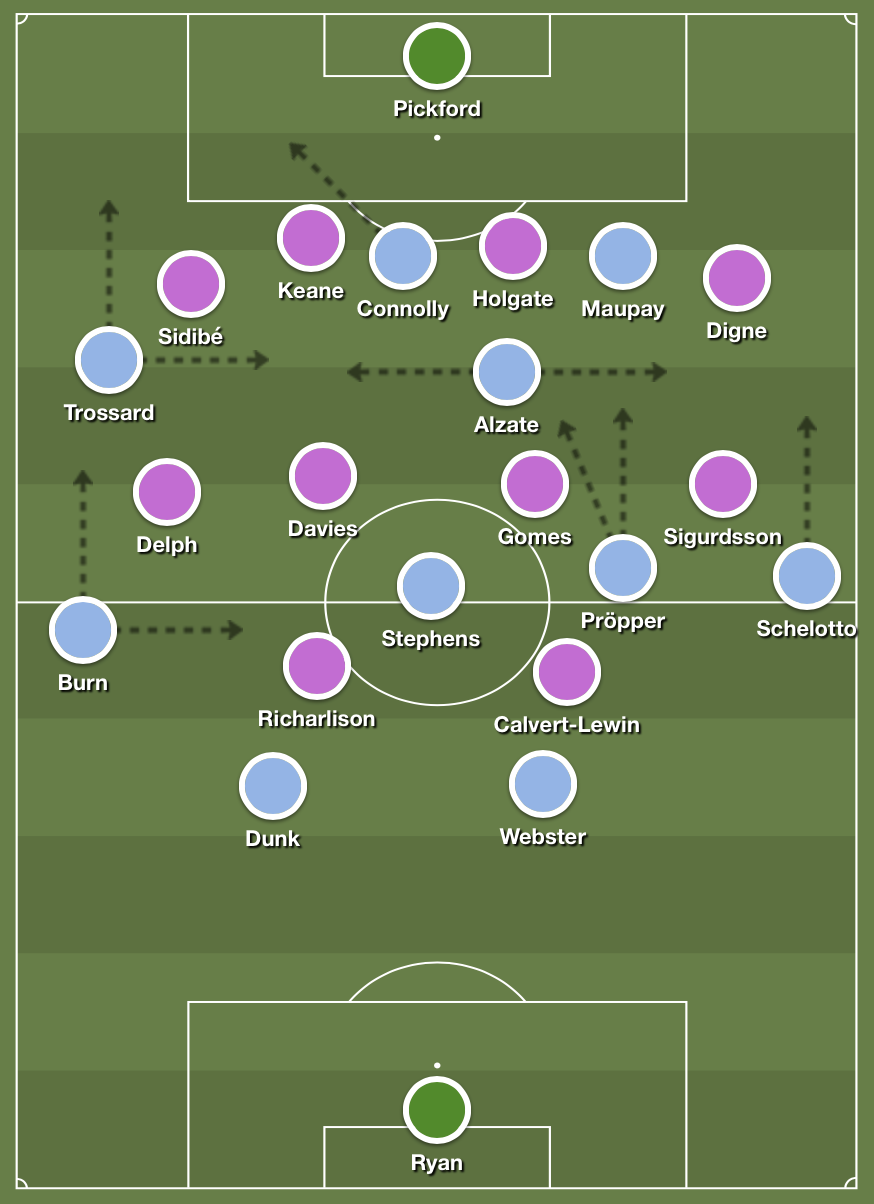 Although Brighton put together a few promising offensive moves, it turned out to be an accidental stomp in the box, committed by Keane on Connolly, that gifted the hosts a glorious chance to level the match. Spot kick duty to fell to Maupay, who drove the ball straight down the middle and into the back of the net – leveling the match.

The penalty revived a waning Brighton side and Potter made his final substitution – bringing on Murray for Connolly in the eightieth minute. From that point forward it was all Brighton, as the home side enjoyed all the momentum in the match’s final minutes. Therefore, it was fitting when Potter’s club put together a delectable counterattacking move, which saw them expertly play out of the Everton press, accelerating through midfield and ending with a threatening low cross from Trossard, which was met in the middle by a sprawling Digne, who guided the ball into his own net. The loss means Everton are still yet to recover from a losing position under Silva, while Brighton notched their third win of the season.

The brief reprieve enjoyed after the West Ham game will have quickly dissipated. Once again questions around Silva’s management will surface and there will likely be significant calls for him to be replaced. A loss to Brighton and a move to within two points of the relegation zone is one thing, but perhaps more concerning is the nature of Everton’s confused performance. Silva’s side rarely looked capable of asserting themselves and for an expensive side, dotted with so much talent, these types of subpar performances are unlikely to be tolerated much longer.

Meanwhile, Brighton will take solace from the fact that they were able to battle back and steal a much needed win at home. Potter’s side may be sitting in twelfth position, but a quick scan of the table reveals they are only three points out of seventh. The return of Trossard could prove to be impactful, as the Belgian remains Brighton’s most dynamic forward and allows the manager to revert back to his preferred 3-4-3 formation. This is a transition year on the south coast and so as long as Brighton can show some promise it seems clear that Potter will be given an adequate amount of time to institute his system.