Eleven games, eleven wins. Things seem perfect for Arsenal right now under Unai Emery, right? Well, not quite as much as you’d think, if you watched them play during that run. Against Roy Hodgson’s free-flowing Palace, this local derby at Selhurst Park epitomized Arsenal’s continued struggles in their buildup play and how Emery is still failing to truly reap the rewards of such a star-studded attacking force.

The Palace boss made just one change to his lineup following last weekend’s 2-0 defeat at Goodison Park. Jordan Ayew made his way into the team for Jeffrey Schlupp, as Wilfried Zaha was pushed back to left wing.

For Arsenal, this was their third game in seven days. It saw six changes compared to the starting eleven that faced Sporting Lisbon on Thursday, with Lacazette and Aubameyang starting together for the first time since Arsenal’s 2-0 victory over Watford almost a month ago. Midfielder Granit Xhaka was still in the left back position due to the continued absences of Nacho Monreal and Sead Kolašinac. 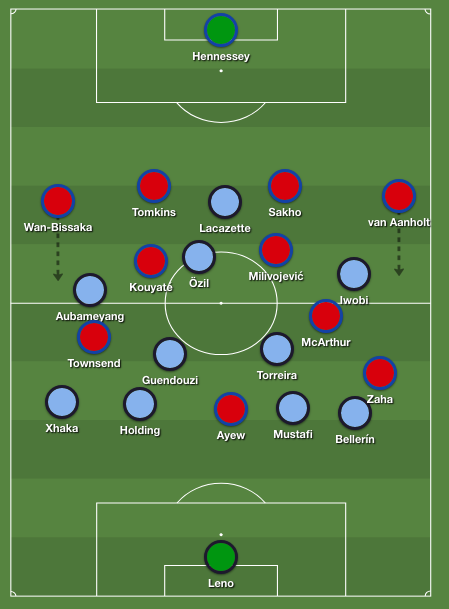 Crystal Palace’s positioning when they were in possession. Arsenal formed a 4-4-1-1.

Zaha’s altered presence playing from the wing
Hodgson’s key tactical tweak against Arsenal was moving Zaha to the outer left wing. By having him remain wide, Zaha could cause more problems for Arsenal, because the away side had to commit more men towards him to provide cover for Héctor Bellerín in one-versus-one situations. Zaha’s presence off the back of the Spaniard never allowed the fullback a moment’s rest. His threat is why Palace centered the majority of their attacks down his side (48% of them came down the left).

Inside the opening fifteen minutes, Zaha had managed to get on the end of a whipped cross at the far corner of the box. He then drilled his shot towards the near post as it rifled out off the post.

The following move that took place following a turnover high in Arsenal’s half saw the winger heavily involved in an attacking sequence that felt Arsenal-esque. A host of flick passes gave access to Patrick van Aanholt in behind as his cutback to Andros Townsend was so nearly converted just a minute later.

Despite not taking the lead through either of these fairly solid opportunities, Palace finally got their reward just on the stroke of half time. Mustafi recklessly brought down an opponent from behind at a corner; Milivojević then stepped up to convert the penalty and secured Palace’s first home goal (!) of the season.

Arsenal’s familiar struggles playing out from the back
Arsenal’s struggles in playing out from the back were very much on show throughout the entire first half. Despite continued warning signs in the past few weeks, Emery still seems unbeknownst to the problems surrounding his side’s possession passages. Once again, their predictable passing patterns were easily disrupted by Hodgson’s 4-4-2 setup without the ball.

The holding midfielders, Mattéo Guendouzi and Lucas Torreira, were afforded time and space outside of Crystal Palace’s defensive block, but the options to pass the ball to ahead were simply lacking. Even with Palace players staying tight to them, the Arsenal attackers simply did not do enough to make themselves available to the ball holders.

Be it down to instructions or otherwise, Palace’s two strikers were comfortably dealing with the four men Arsenal had to recycle play from side-to-side. It was the spacing and positioning that was stagnating the visitors’ play, here.

All too frequently, both Torreira and Guendouzi peeled wide of either striker into a fullback-like position. All this resulted in, were easy-to-contain passes back and forth from the fullbacks. There was no way inside Palace’s block. And, because both midfielders were positioned wide, there was no option centrally in front of Palace’s midfield to connect play across or simply find ways into the attackers more directly.

Even on occasions when Arsenal’s midfielders split into a diamond shape they struggled to connect into the center as Torreira would not provide the option well enough. It resulted in a very predictable and unprogressive U-shape When a team has possession on the sides of the pitch and with their own central defenders, this is called a ‘U-shape’, because it resembles the letter U. in possession. 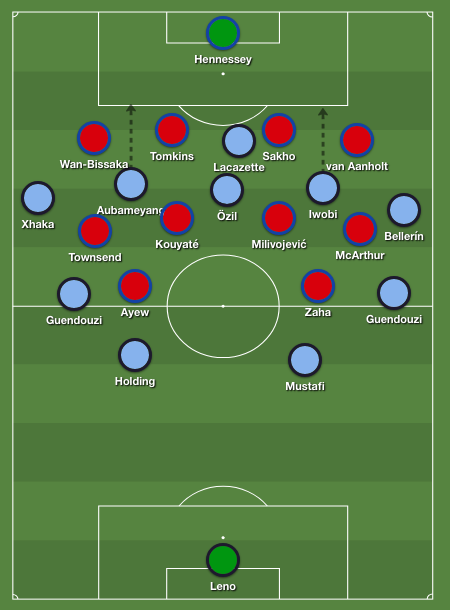 Arsenal possession structure at times left a huge hole in the center.

The cry for Mesut Özil
Emery has persisted with playing the German in a more heavily restricted role this season that aims to maintain a stronger positional structure. But, in doing so, it has mitigated the major positives Özil is able to provide in terms of progressing the ball.

With the gaping hole ahead of him in the midfield structure, Özil had little way of getting on the ball as frequently as he had under Arsène Wenger last season. In a freer role, the number ten can offer a much smoother link between the defense and the attack that has so sorely been lacking for Arsenal this season.

It is quite telling that on the relatively limited number of times that he dropped wide off the back of Palace’s midfield, he helped to overload  When one team has more players in a certain area or zone than the other team. and find better access into the attack. One move even featured him dropping between the center-backs, spreading it wide, moving through the center to break through Palace’s midfield and then feeding it into the attackers.

Arsenal take the lead through fortuitous circumstances
Trailing and lacking a coherent offensive strategy throughout the entire first half, it was tough to see a way back into the game for the Gunners at this point. Especially after a still not-so-strong start to the second half. However, they managed to manufacture it within the space of a few minutes.

Torreira drew a foul on the corner of the eighteen-yard-box having swept up a loose ball. Xhaka then struck it venomously into the far, top, left corner. A brilliant stunner that came out of the blue to put the game level again. Not long after that, Arsenal were leading. Pierre-Emerick Aubameyang stabbed it in at the back-post from a corner, albeit following a controversial decision not to rule the goal out for a potential handball by Alexandre Lacazette. Within six minutes, Arsenal had entirely changed the course of this game.

Hodgson’s tweaks and substitutions earn Palace the point
The home side were still putting on the pressure and were certainly unlucky to go behind.

An hour in, the manager brought on Alexander Sørloth and Max Meyer in place of Ayew and McArthur respectively. Zaha and Townsend were beginning to both drift inside much more and it was paying off.

For the crucial equalizer, Zaha popped up in an inside right position, as he shimmied his way past Xhaka, being taken down in the process. Referee Mark Atkinson showed no hesitation in pointing to the spot for a second time in this match. Whether the contact was actually there was up for debate, but Milivojević showed no nerves in his strike to equalize. In the last ten minutes, Arsenal could not muster a serious mount for the winning goal, as they only managed to shoot once after the equalizer.

Takeaways
Off the back of three consecutive league defeats, this kind of response was quintessential for Crystal Palace. Hodgson’s team controlled the game well for the majority and were maybe a little hard done having only picked up a point. With three other top-six opponents coming their way, they will cherish it, though. Their formula of a steady defensive organization and one of the league’s best dribblers in Zaha might prove a tough nut to crack for the rest of this season.

On the other side, Emery’s Arsenal continue to earn results without impressing. Torreira was their one shining light in an otherwise dismal performance. As the win streak comes to an end, you imagine their unbeaten streak will too against Liverpool next Saturday. With months of time to learn about his squad, it can be considered a bit worrisome that Emery is yet to really get the best out of his key attacking players.

Not only did he bag a brace, Luka covered more ground than any other player on the pitch! 👑 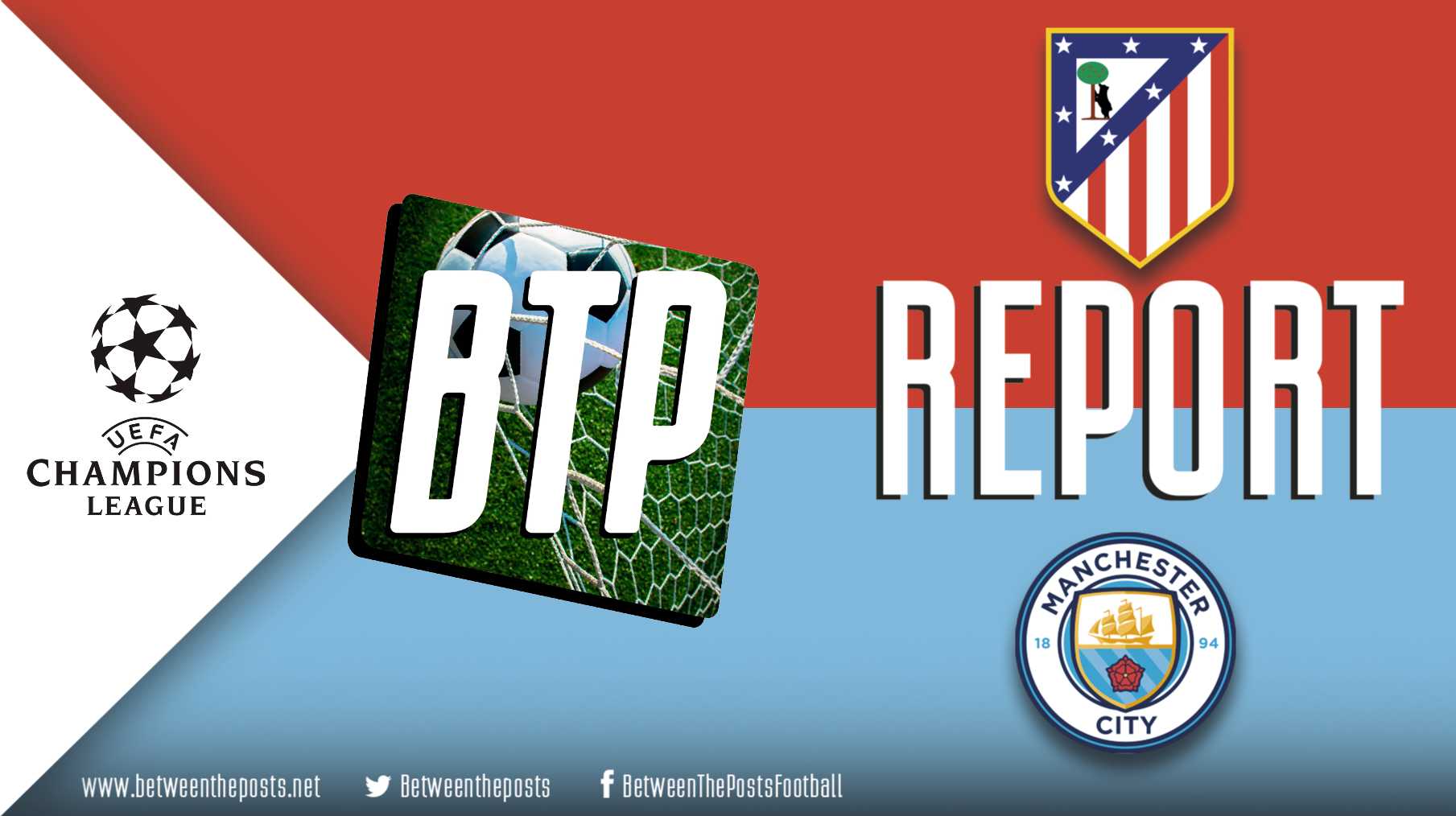 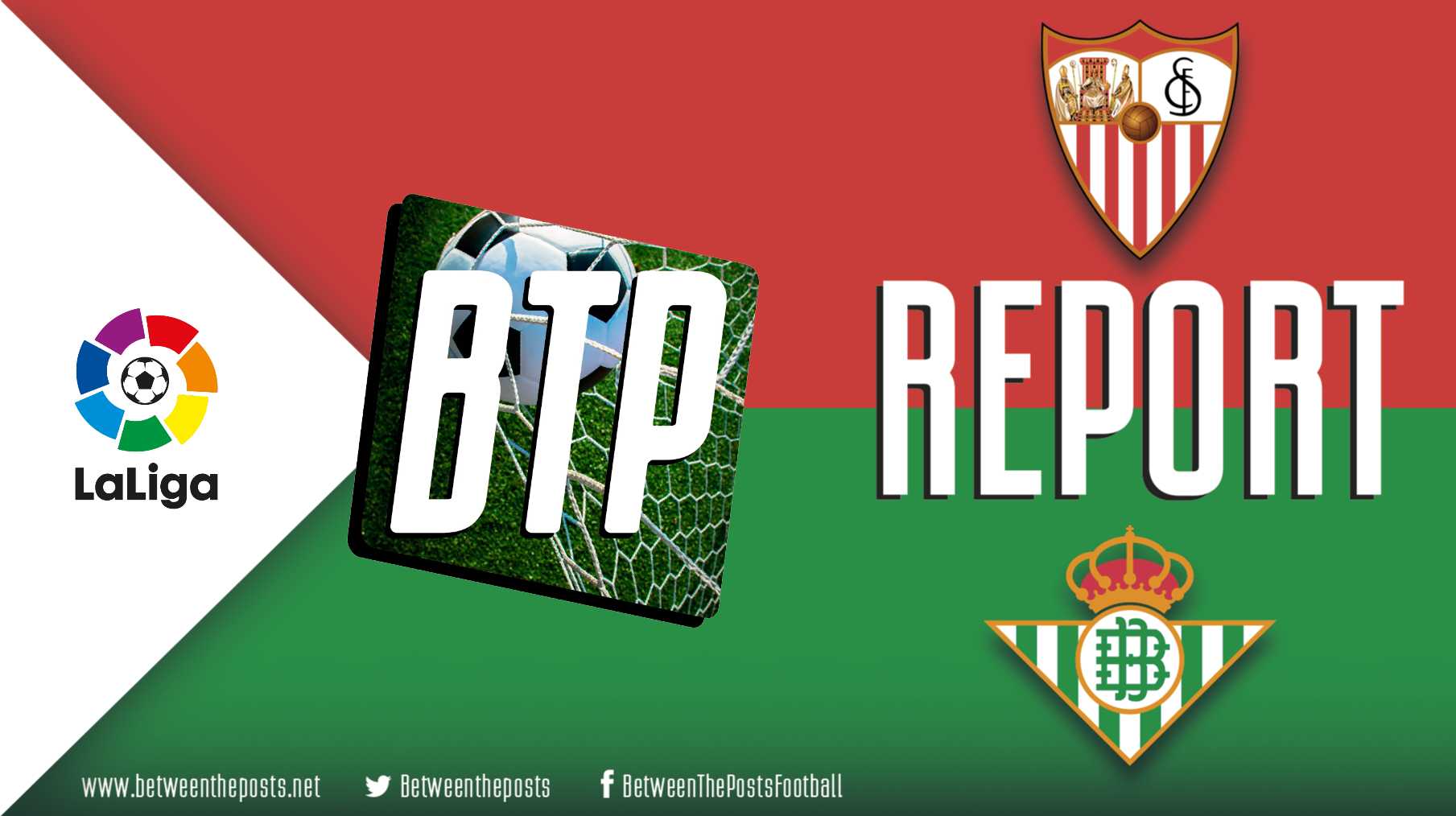