France – Germany: Some reasons for optimism for Germany, despite loss to World Champions France (2-1)

Joachim Löw surprised with a new system that outplayed the World Champions in their own stadium. After an early lead for Germany, Didier Deschamps’ adjustments brought France back in the game and, with some fortune, France managed to win the game. Despite the defeat, however, there are finally reasons to be optimistic about Germany.

Stepping into the World Champions den, facing the risk of relegation, all narratives pointed to the final nail in the coffin for Joachim Löw. What we saw instead was, perhaps, the first game of a new Germany. Löw switched to a 5-2-3 formation and to a considerably younger XI than the one that lost in Amsterdam.

Matthias Ginter, Niklas Süle and Mats Hummels made up the back three, Thilo Kehrer and Nico Schulz played as wing-backs. Joshua Kimmich and Toni Kroos formed the double pivot and Leroy Sané, Timo Werner and Serge Gnabry were fielded as a pacey and dynamic front trio.

Kehrer, Schulz and Gnabry had only two starts for the national team between them before this game. Thomas Müller was left out only for the second time in an official game, excluding injuries, since the Euro 2016 qualifying, which just goes to show how new and fresh this German side felt.

In a team that has just won the World Cup, there is no need to drastically change things. France kept to the ‘’never change a winning team’’ motto and started with the XI that brought success at the World Cup, with the exception of Presnel Kimpembe playing instead of the injured Samuel Umtiti. 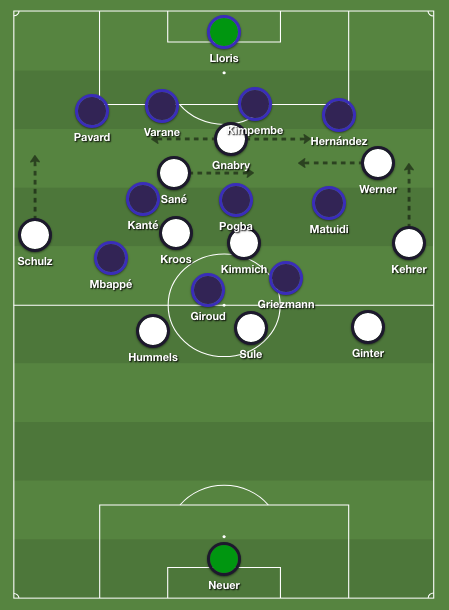 Germany building up, France in a low block. A low block refers to a team that retreats deep in their own half out of possession, generally only disrupting their opponents around their own box.

Germany dominate
The very first minutes showed the best of Deschamps’ France, defending deep and inviting the opposition forward. Every football fan knows this recipe by now: Olivier Giroud is a fine outlet in offensive transitions while creating space for Antoine Griezmann and Kylian Mbappé’s, who are a true nightmare to deal with. Very quickly though, Germany took control of the game.

With three at the back and against a side that prefers to defend, Germany had no problem playing out of defense, as Süle and Ginter often had plenty of time on the ball to pick a pass. There was plenty of mobility and players finding space between the lines, and Kroos and Kimmich were found too easily between the French attack and midfield. The front three were in constant movement dropping between the lines or making threatening runs in behind the defense while Kehrer and Schulz provided width.

From the center-backs, the ideal passing line would be to a forward dropping deep who could try to play towards a teammate’s run or would immediately have the support of their side’s wing back and the double pivot.

Alternatively, the center backs could play wide, where the wing backs would have the option of playing towards a run by a forward outside the opposing full back or towards the double pivot. Either way, in the worst case scenario of not achieving quick penetration, the ball would end up at the feet of Kroos or Kimmich with space facing forwards. While in theory outnumbered, the German double pivot saw a lot more of the ball and could dictate play, Kroos in particular being sublime. 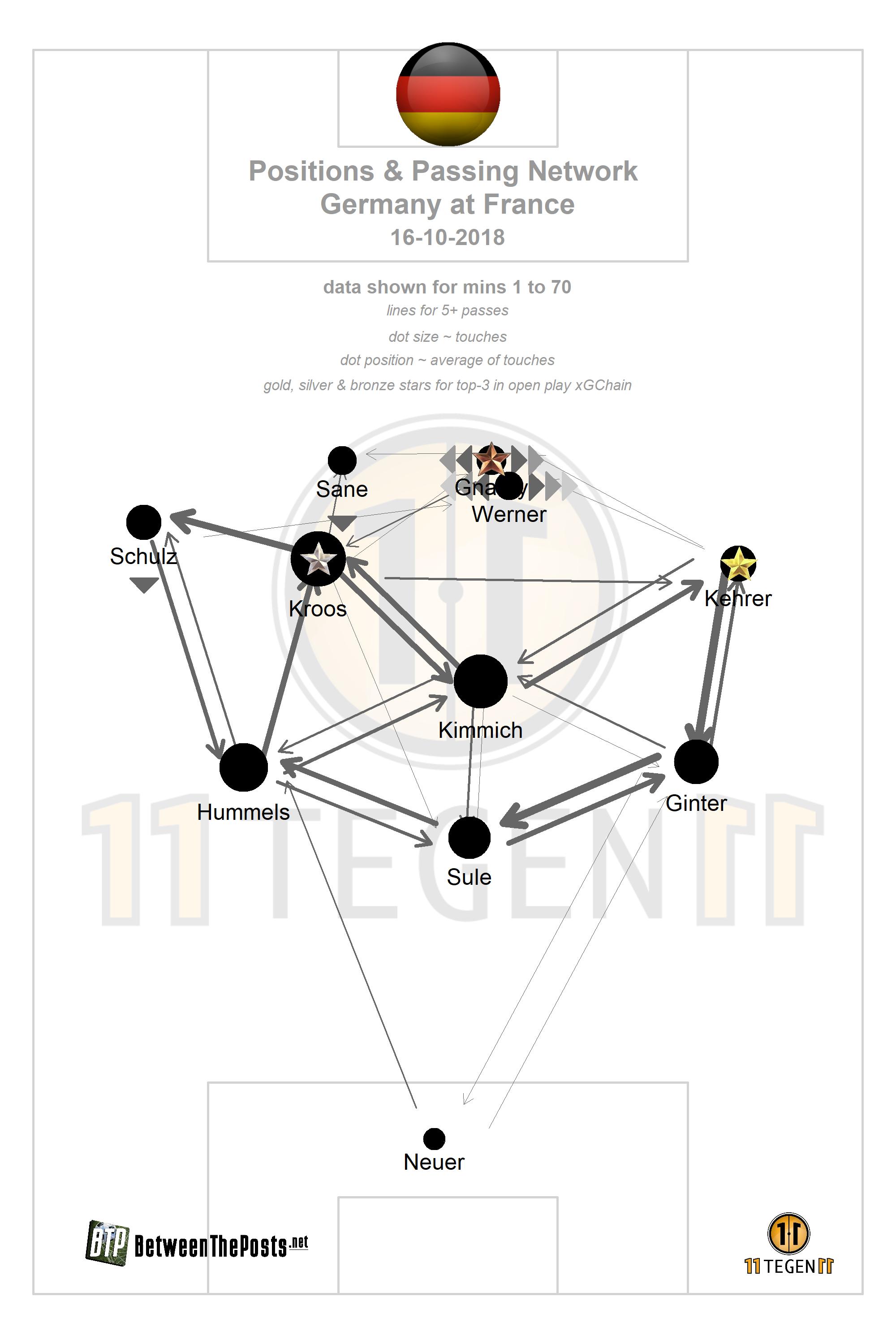 Germany take the lead, partly due to France’s lack of aggressiveness
France, as stated earlier, was partly to blame for this German superiority. They looked uncomfortable playing against a three-at-the-back system. Mbappé is relieved of defensive duties because of his counterattacking prowess, which gave Schulz a lot of time and space. Giroud and Griezmann were constantly outnumbered and could not annoy the German center backs. Because of the big spaces, neither could help to press Kroos and Kimmich. As such, there were simply too many men for Blaise Matuidi, Paul Pogba and N’Golo Kanté to deal with and it was easy for Germany to find a free man in midfield.

Germany took the lead from the spot after thirteen minutes after Pogba had lost a ball in his own half to Kimmich. Gnabry was immediately launched at pace, passed to Sané on the right whose cross hit Kimpembe’s arm. Kroos converted the penalty to put Germany 0-1 up. Five minutes later the visitors could have doubled their lead on a break that saw Sané and Werner against Raphael Varane, but Sané’s pass was too heavy and Hugo Lloris managed to get a hand on the ball and deny Werner an almost certain goal.

Deschamps adjusts to a 4-3-3 formation and balances out the game
Something needed to be done and the French manager opted to move Griezmann to the right wing and Mbappé to the left so he could bring Matuidi to a midfield trio. More importantly, France pressed a lot more and higher up the field in the second half. This way, the game became more balanced.

And an even and balanced game tends to suit the team with the most players that can “unbalance” it on their own. In the 52nd minute, France had their best chance of the game with Lucas Hernández sending Mbappé one-on-one, forcing Manuel Neuer into a critical save.

But the hero was always meant to be Antoine Griezmann. The Burgundian star equalized on the 62nd minute with an exquisite header following a cross by Hernández and then completed the turnaround converting a penalty eleven minutes from time.

Ahead in the game, France controlled the final minutes without too much trouble and saw the game out. France are in control of their group and one draw against The Netherlands will suffice to reach the Finals of the UEFA Nations League.

Takeaways
Another defeat will help the narrative that Germany are bad and Löw has to go, but despite the result, this game showed quite the opposite. The 5-2-3 can be seen as a very positive experience and it’d be interesting to see how it develops.

In this system, Germany are better positioned to react to counterattacks. It takes advantage of players that can form a very interesting dynamic and pacey attacking trio which is quite difficult to defend against. And it suits their best player, Kroos, perfectly. This could very well be the beginning of a new era for the German national team.

As for France, a win is a win and they showed a lot of mental strength to get back in the game. But this was far from an impressive performance from the World Champions. Deschamps side is usually very strong defensively and has some great individual quality. As always after having watched France, one feels that they have the ingredients to be a lot better than they were. This was yet another game that could easily have slipped from them, but did not.

World Champions can go from heaven to hell rather quickly – a feat well-known to their opponents on the night. The fact that an out-of-form Germany could dominate them in the Stade de France with a completely new system put together in a couple of days – including the introduction of some new faces – should be a warning sign. But most likely it will take an actual defeat for questions to be raised.