Crystal Palace – Arsenal: Gunners Get Off On The Right Foot (0-2)

Friday night under the lights at a raucous Selhurst Park would be a stern test of Arsenal’s metal. Notwithstanding their early lead, the visitors were under the cosh for stretches of this match. But they weathered the storm, thanks to a man whose debut was well worth the wait.

If last season was all or nothing for Arsenal, this one must be make or break for Mikel Arteta. To open the Premier League fixture list was a perfect prospect to avenge pangs of pain from his past.

A 3-0 triumph for Crystal Palace in April was the start of the end for Arsenal’s top four hopes. That outcome was indicative of the tale of a campaign where the Eagles soared. The threat of the bottom three loomed over an elderly outfit in the summer of 2021. But Patrick Vieira has built a young squad that took the launchpad of stability under Roy Hodgson to climb into the comfort of mid-table. Could they cool off the ammunition of their fellow Londoners to lay down a marker for another strong year?

A proper project has sharply defined goals. Change is occurring at Arsenal but is their progress at a satisfactory rate? FA Cup glory masked the mediocrity of two eighth placed finishes in a row in the Premier League. The beginning of this year then brought the hope of a fearless firing range gunning its way into the top four, only to fall away at the final hurdle. The process has taken the club back into European competition, but the next crucial step is to return to heights not reached in the last six years.

Arteta’s men took to the field in a 4-2-3-1 shape. He picked the same eleven players that thrashed Sevilla 6-0 in the Emirates Cup. So, three years after moving to North London, William Saliba finally made his debut for the guests. Ben White stayed as a right back, and Oleksandr Zinchenko held onto his spot on the left of the back four to keep out Kieran Tierney from the side. Another old Manchester City man Gabriel Jesus started upfront, keen to profit from the guile of new captain Martin Ødegaard.

Vieira, likewise, went for a 4-2-3-1 formation. The only new face in his outfit was Cheick Doucouré to the right of the double pivot. In front of him, Ebere Eze had returned from a prolonged layoff with an Achilles injury to play as the number ten. However, Michael Olise missed the match due to a foot injury. Thus, Jordan Ayew operated as a right winger in his place, and Odsonne Édouard led the line.

Arsenal in the ascendancy

Given how timid Arsenal were in their last trip to Selhurst Park, it was imperative to engage the home team on their terms. As Arteta hoped, a dominant display manifested in the first quarter of an hour.

The summer signings picked up from where they left off in the preseason. Zinchenko is a midfielder by trade but spent most of his minutes at left back for City. He typically came into the middle of the pitch on the ball, fulfilling a similar role for Arsenal. If he offered a second option in front of Palace’s midfield next to Thomas Partey, Granit Xhaka moved outward and vice-versa. Either way, Martinelli had the freedom to drift off the left flank to pick up the ball and support the second phase of the play.

Zinchenko could also stay wide while his teammates threatened through the center. The diamond in the middle of the park with a dropping striker is still in Arsenal’s repertoire. At its tip now is Jesus. He can come short and generate a central link but also threaten from the sides. Clever layoff passes and associative play often worked the ball to the right, where Bukayo Saka tried to infiltrate the halfspace.

Arsenal soon profited from their brisk start to the fixture. In the 20th minute, Saka whipped a cross into the penalty area from the right. Zinchenko peeled away to the far side of the box, nodding the ball back toward the near post. Martinelli buried a headed effort, atoning for a prior miss from close range. 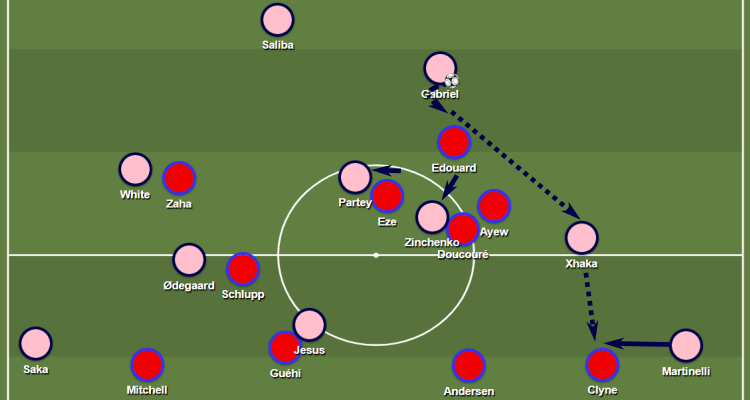 2nd minute: offensive sequence from Arsenal. Zinchenko dribbles inward, then stays inside after the release to Gabriel Magalhães. Partey slides laterally, Zinchenko moves a little higher to create space to receive, and Xhaka rotates outward. Doucouré is wary of overcommitting to Xhaka, opening up a switch, so leaves the midfielder and instructs Ayew to drop. Martinelli is then able to break inside.

A predictable pattern of pressure

This phase of the game mainly featured a high 4-2-3-1 block from Arsenal. Ødegaard was tight to Doucouré as the pivot, while Jesus often pressed from the front with curved runs to block passes from one central defender to the other. If Martinelli jumped to close down Joachim Andersen from outside, Zinchenko moved outwards to have better access to Nathaniel Clyne. Xhaka dropped off to cover Eze, prompting man-oriented defending off the front from Gabriel, Saliba, and White to keep the forwards in check. Arsenal’s intensity managed to shut down any goal threat from Palace nearly until the break. 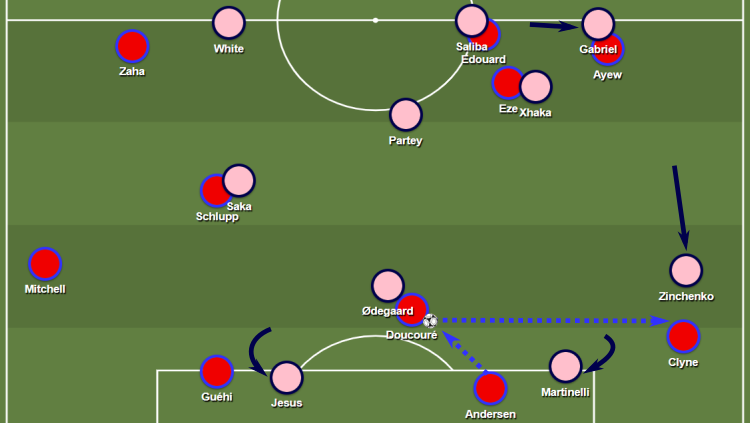 18th minute: high pressing sequence from Arsenal. Jesus arcs his run to encourage a pass to Vicente Guaita from Guéhi. Palace escape Martinelli and Ødegaard thanks to a third man combination to find Clyne. But now Zinchenko can jump to force a long ball from Andersen, while the double pivot drop to cover in front of the central defenders. Gabriel picks up the pieces from Édouard’s flick-on.

However, the tide was turning in favor of Palace. Single goal leads for Arteta’s men have tended to mark a decline in intensity. Indeed, the hosts began to grow in confidence at the half hour mark. A lack of pressure to force turnovers at the back gave space and time to Andersen to spray diagonal passes into the path of Zaha. Arsenal could not flip the switch, falling back into a more passive block.

The guests were more willing to morph into a 4-4-2 pressing structure at the start of the second half. Ødegaard ran at Guéhi, and Xhaka marked Doucouré behind him. Yet, this change was not enough to weaken Palace’s grip on the play. Calculated long balls from Andersen now targeted the right. Ayew bullied his way into the channel as the back four dropped, while Zaha blossomed from the other flank.

Chances eventually came for Palace, who had ended up with 57% of the ball by the final whistle. In the 52nd minute, a brief loss of concentration let Eze freely break into the box, but Aaron Ramsdale parried his strike. Though the visitors had not punished Palace more before the break, the course of the game brought attention to Saliba’s talent. A calm customer on the ball, his tackling, turn of pace, and positional sense in the penalty area was the ideal cover for White to help preserve a clean sheet.

William Saliba on making his debut for Arsenal in the Premier League.

Arteta made a double substitution in the 83rd minute. Zinchenko made way for Tierney, and Eddie Nketiah came on for Jesus. The striker’s fresh legs took Arsenal to the cusp of the top four at the end of last season; he duly wasted no time making a mark here. Dropping to receive from Xhaka, a switch to Saka breached the final third. The right winger drilled the ball back along the face of the goal in an attempt to return the favor, but Guéhi stooped down to finish the job on his behalf. 2-0. Game over.

Arsenal did not kick on from their prompt start to this clash, but it was pivotal to come away with a win. They might have yielded to another opening day defeat on the road, but their preparations this year starkly contrast with those of 2021. Above all, new faces, plugging visible holes in the squad, had time to bed into Arteta’s plans. The flexible profiles of Zinchenko and Jesus offer new tactical solutions, while Saliba starred at the back. They now prepare for the visit of Leicester City next week.

Before kickoff, Vieira claimed efficiency in front of goal would let Palace have a chance of keeping a foothold in this contest. All the more reason for the hosts to rue their wastefulness. Palace’s strengths came to the fore as time elapsed. Blending physique and technical prowess, a nod to Vieira himself, they might have forced a tighter final score. The tenacity of Conor Gallagher is no longer a weapon in their ranks, but the manager has no intention of allowing his return to Chelsea to derail his aspirations. 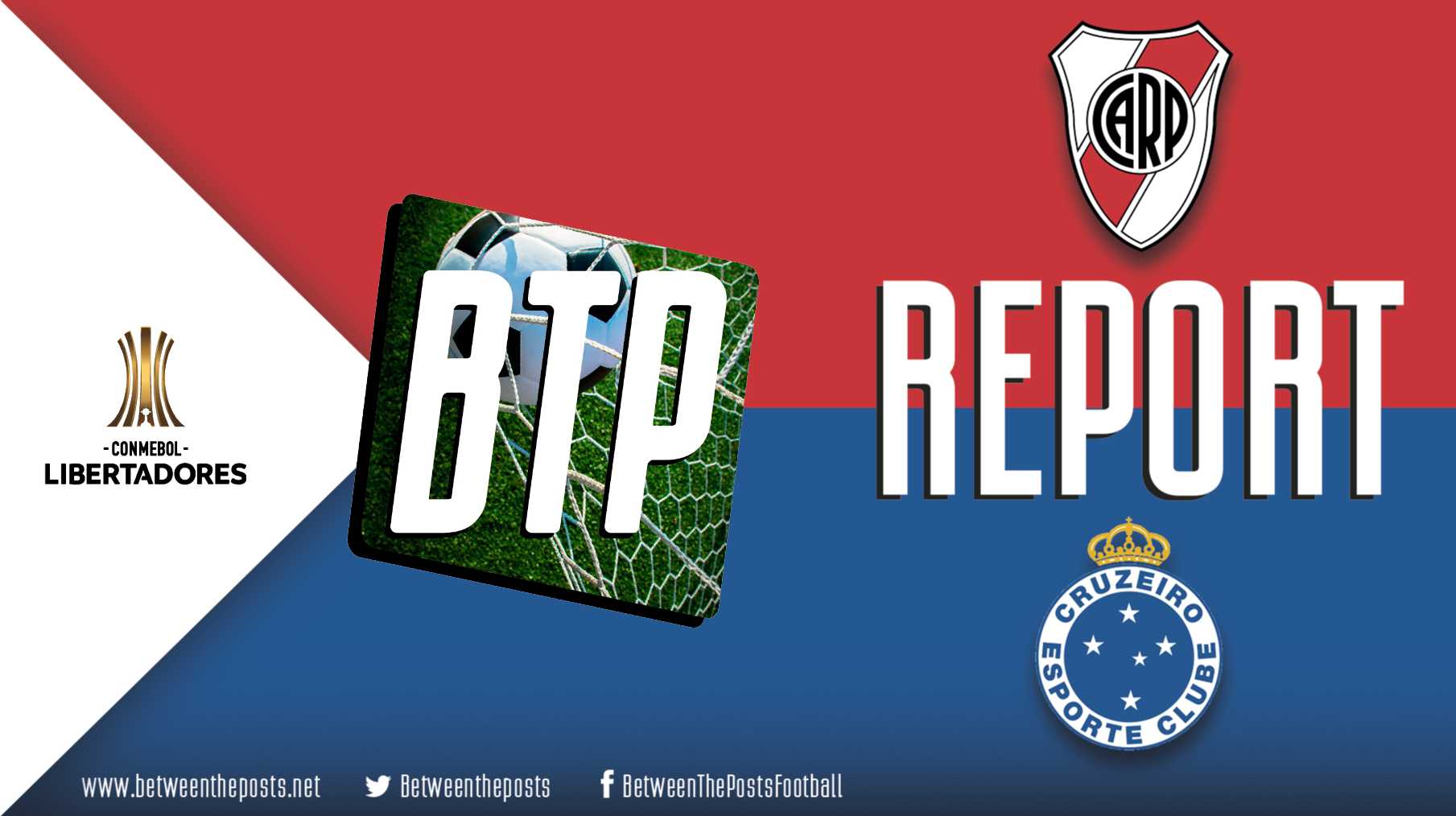