Defender Jérôme Boateng’s red card, ten minutes into the start of Bayern München’s match against Eintracht Frankfurt, opened the door to victory for the hosts. However, Bayern manager Niko Kovač’s unrealistic expectations, combined with naïve tactics, allowed Frankfurt to run riot in the second half and ultimately led to his eventual sacking on Sunday evening.

So far this season, the mood around Bayern München has been less than enthusiastic. The division at boardroom level and the perpetually tenuous nature of Kovač’s stewardship has been exacerbated by often middling on field performances. And yet, despite the issues plaguing the club Bayern still very much find themselves in the midst of Germany’s rather competitive title challenge.

In recent weeks, injuries – particularly in defense – have made life more difficult for Kovač – forcing the now sacked Bayern manager into more creative solutions, while also testing his side’s depth and youth products. Therefore, Kovač’s decision to field a 4-2-3-1 formation with a center-back duo of David Alaba and Boateng after a midweek fixture, while curious, was not unpredictable. Flanking the central defenders were Benjamin Pavard at right back and 19-year-old Alphonso Davies, who made his third straight start on the left side. Pavard’s inclusion rotated Joshua Kimmich into the midfield two with Thiago Alcántara, as the tandem sat behind a forward-three of Serge Gnabry, Phillippe Coutinho and Thomas Müller. Up front, Kovač stuck with the red hot, Robert Lewandowski.

This campaign has seen Eintracht plagued by up-and-down results – exemplified by a convincing round eight victory over Bayer Leverkusen, which only a week later, was followed by a humbling at the hands of Borussia Mönchengladbach. Manager Adi Hütter has done well with a side that lost nearly all of their attacking firepower from last season – parting ways with Luka Jović, Sébastien Haller and Ante Rebić. Nevertheless, Frankfurt’s dexterous sporting director, Fredi Bobič, filled in the gaps with thoughtful additions – making Sebastian Rode and Filip Kostić permanent, while also bringing in forwards, André Silva, and Bas Dost.

Hütter has shown a distinct preference for playing a 3-1-4-2 formation and the match against Bayern was no different – as he started David Abraham, Martin Hinteregger and Evan N’Dicka in a back three – shielded by Gelson Fernandes in defensive midfield. In front of the Swiss holding midfielder, Hütter selected Danny da Costa, Djibril Sow, Rode and Kostić. The strike duo of Dost and Gonçalo Paciência got the call to lead the line.

The match began with an intense high, wing-press from Frankfurt, who were successful in hampering Bayern’s buildup – making the visitors uncomfortable from the outset. The front three of Frankfurt was effective at moving in conjunction with their wide midfield players to act quickly on any balls shifted out to the Bayern fullbacks. It was a maddening exercise for Kovač’s men, as they were forced to punt the ball up field several times to start the fixture. 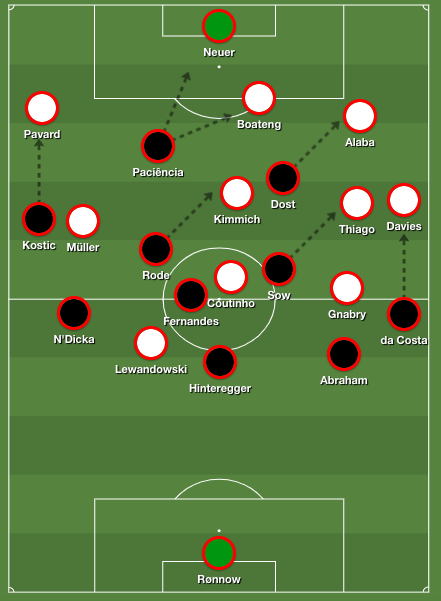 However, when Bayern were able to progress the ball through the Frankfurt press and move into their defensive third, they chose to hold an incredibly high defensive line with Pavard and Davies frequently coming inside to create overloads, When one team has more players in a certain area or zone than the other team. while receiving little support from Thiago and Kimmich in midfield. This imbalance was the root cause of the counterattack that led to Boateng being forced into a last-man-back tackle just outside the penalty area – earning him a red card. Dost and Panciência were able to mark the Bayern center-backs and therefore a turnover in the penalty area led to a breakneck Frankfurt transition – leaving Boateng with no choice but to foul. 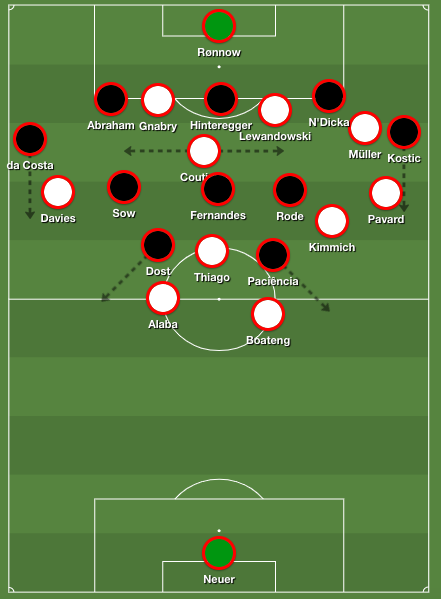 Boateng’s exit forced Kimmich into the right back position, while Pavard shifted into central defense. Meanwhile, in midfield Coutinho slotted in alongside Thiago, while Müller and Gnabry held wing positions so that Bayern were playing a nominal 4-4-1 formation with Lewandowski at the tip. It was after several minutes that it became clear Kovač was not going to make any substitutions and, what is more, was not going to adjust Bayern’s proactive game plan.

The by-product of Kovač’s decision was an off-kilter, three-man press that was easy for Frankfurt to bypass. Moreover, the impact of the press was a significant amount of running foisted upon Gnabry and Müller, who needed to move up field to try and press the Frankfurt buildup and then quickly make broad recovery runs back into their 4-4-1 defensive formation. 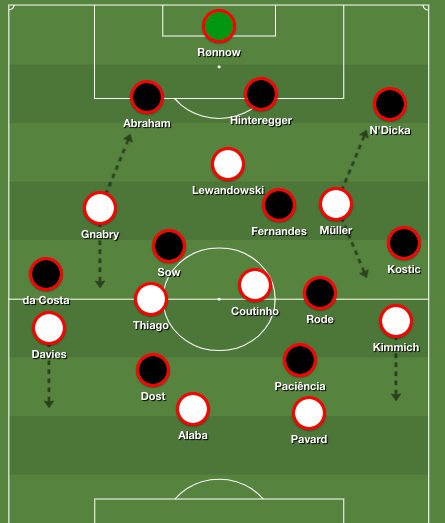 For a time, this approach worked for Bayern, as it obliged Frankfurt into more possession and complex passing sequences, which bumped up against their prepared game plan – to play on the counterattack and through midfield transitions. However, Bayern did eventually settle back into their preferred possession game and Frankfurt’s numerical advantage in midfield quickly became apparent. In the 25th minute Thiago turned the ball over and Hütter’s side was able to transition with numbers in advanced field position. The result was a Kostić goal and a 1-0 lead for the home side.

Notwithstanding the fact that his side had conceded a goal by continuing to play into Frankfurt’s hands, Kovač still passed on the opportunity to adjust tactically. Bayern continued to own the lion’s share of possession and Frankfurt were happy to settle back into their comprehensive 5-3-2 low block. A low block refers to a team that retreats deep in their own half out of possession, generally only disrupting their opponents around their own box. Meanwhile, up to this point, Frankfurt had largely been unconvincing in buildup, but in the cases in which they were able to develop play effectively, they proved ruthless. Hütter had his side adjust to a 3-2-5 formation when transitioning through midfield, which put a ton of pressure on Bayern’s wingers to collapse deeper into their defensive third. At which point, Rode and Sow were able to take turns dropping into midfield – outmanning the tandem of Thiago and Coutinho. 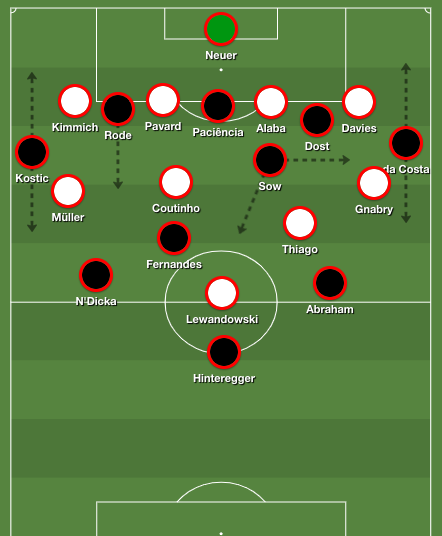 This ballet led to the second Frankfurt goal, which was expertly worked through a number of clever touches and thoughtful runs – scattering the Bayern defense – before Kostić was able to play a ball across the box to a wide open Sow – doubling the Frankfurt lead.

Even with Frankfurt’s numerical advantage Bayern were able to find gaps in the defense, mainly off the shoulder of Sow. This type of focused attack led to Lewandowski’s 2-1 marker. The goal showcased a splendid bit of individual skill from the Polish international, who bullied Hinteregger – forcing his way to the front of goal and finishing clinically. This was a microcosm for Bayern’s first half, as they were creating chances, but the physical toll their game plan was taking on them was unsustainable.

It all comes crashing down

It was apparent to start the second half that the physical demands put on the Bayern players were untenable. The amount of running, their largely ineffective press had put on the midfield was acute. In the 49th minute Frankfurt took advantage and Abraham scored his club’s third goal through another wonderful buildup sequence – made easier by a lethargic Bayern defense.

Matters only got worse for Bayern, as Kovač made a curious substitution in the 55th minute – bringing on Kingsley Coman for Coutinho. The decision pushed the already spent Müller into central midfield alongside Thiago and just six minutes later was punctuated by Frankfurt’s fourth goal of the afternoon.

Realising his side was unlikely to make a comeback and hoping to stem the flow of goals, Kovač brought on Javi Martínez at center-back, replacing Müller. The change once again affected Kimmich, who transitioned back into midfield, pushing Pavard out to right back.

Somewhat content with their three-goal lead, Frankfurt began to slow the match down with elongated passing moves and a more pronounced defensive block. At this point, the Bayern starters were exhausted – unable to put in the same amount of running that kept them in possession throughout most of the first half. The pressure on the fullbacks – Davies and Kimmich – to maintain high positions and do a fierce amount of tracking back was bordering on masochistic. Davies represented the lone bright-spot for a weary Bayern, as the teenager ran his socks off down the left flank – covering in defense and supporting Coman wherever he could.

Frankfurt’s fifth and final goal can be chalked up to exhaustion on the defensive side of the ball – substitute André Silva weaving his way through a worn-out Bayern side before finding Paciência in front of goal to slot it home.

In Spain they call it a manita when a team scores five goals – one goal for each finger. However, in this case, it represented more goals than Eintracht Frankfurt had been able to score on Bayern in their last ten matches combined. 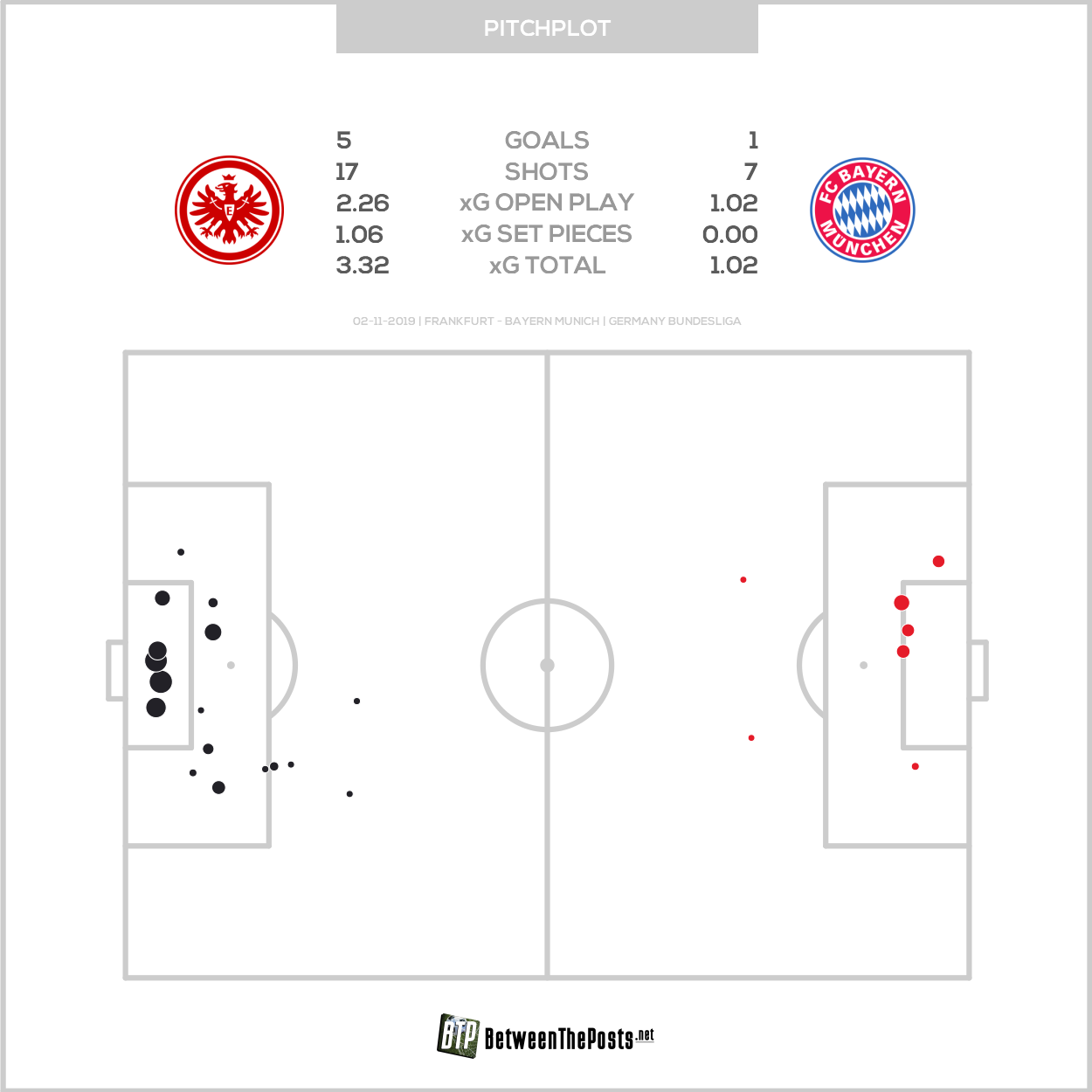 Eintracht Frankfurt will have to find a way to transition such a monumental victory into a lasting period of good form. The competitive nature of the Bundesliga means that while wins such as these are integral to remaining in the hunt for the top four spots, they are also compulsory in maintaining Frankfurt’s distance from the bottom half.

As for Bayern, this season continues to grow more complicated. Prior to his sacking, Kovač’s presence felt increasingly a consequence of there being no obvious long-term replacement, as well as a continued power struggle between president, Uli Hoeneß and chairman, Karl-Heinz Rummenigge, who are reported to have different philosophies regarding the future of the club.

Kovač’s departure leaves assistant manager Hansi Flick in charge on an interim basis. The next step for Bayern is a significant one, as regardless of the conditions, there is an expectation that the club compete for both the German and Champions League title. The eventual manager will have his hands full continuing to bed-in the new acquisitions, as well as the crop of young talents Bayern have hoarded over the past two seasons. What is more, they will have to balance the progress of these new talents with the continued presence of legacy players such as Müller and Boateng. It will be a complex several months in Bavaria, as the club continues transition under new stewardship. 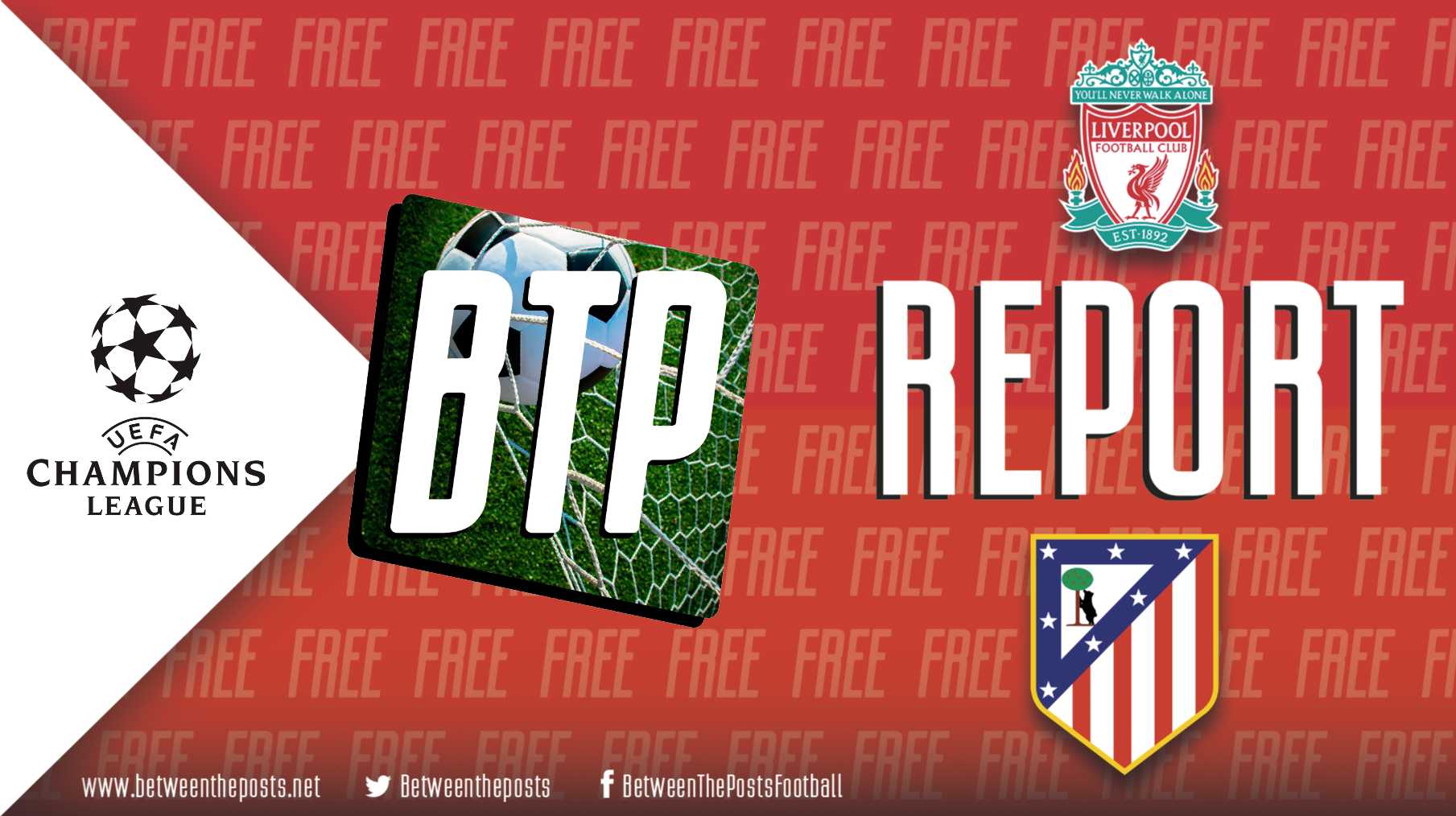 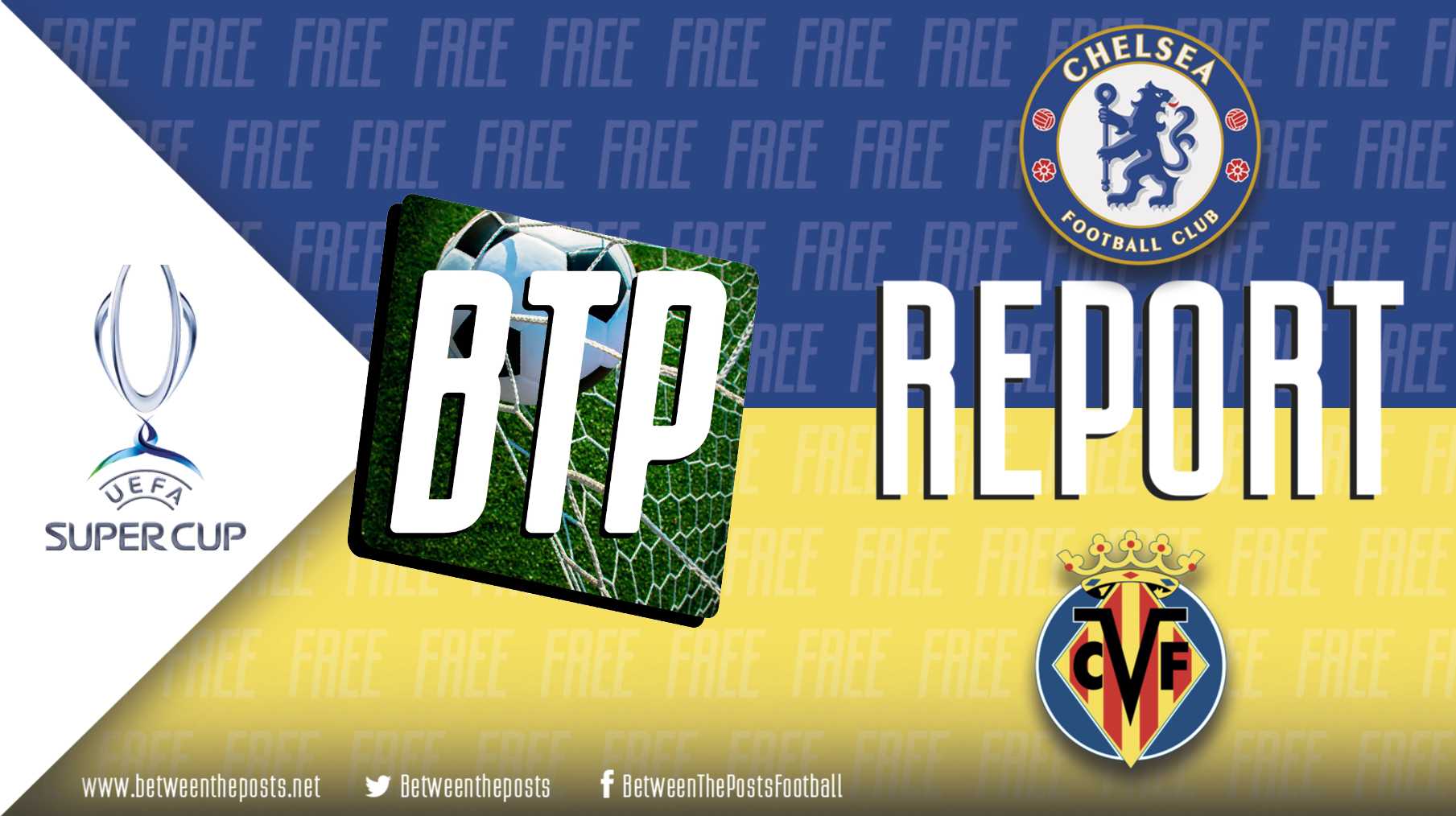