Unai Emery might have thought he was on the cusp of a good result. Arsenal’s decent first half display managed to mostly contain Leicester’s threat while creating chances off their own back. However, a second half midfield collapse proved too much to handle following many missed opportunities.

For the first time in a very long time, there was a feeling that Leicester City were the favorites over Arsenal, and rightfully so given that they had only failed to win in two of their previous twelve games in all competitions – those two defeats coming narrowly at Anfield and Old Trafford no less.

With a superb record at home to the North London side over the past few years, there was little reason to believe this side could not achieve the same winning feat. Leicester City were identical to the 4-3-3 setup that Brendan Rodgers used last week in their 2-0 away win at Crystal Palace.

Unai Emery, who has been placed firmly under the spotlight now – with fans eagerly awaiting his dismissal – resorted to a cautious approach, returning to a 3-4-1-2 setup, featuring Mesut Özil behind Alexandre Lacazette and Pierre-Emerick Aubameyang – the same system the manager used in Arsenal’s run to the Europa League final last season.

This system certainly differed in many respects to the 4-2-2-2 shape used in the 1-1 home draw with Wolves a week ago, with Dani Ceballos, Sokratis Papastathopoulos and Kieran Tierney departing the starting eleven, but it shared similarities to the back-three used in Guimarães on Wednesday, in yet another 1-1 draw.

Arsenal made it clear from the get-go that they were happy to sit off and allow for the opposition to take control. This was clear in Arsenal’s very standoffish and flat 5-2-3 shape. It saw the strikers split very wide of Özil, who would man-mark Leicester’s number six, Wilfrid Ndidi. This setup allowed the home side’s center-backs all the time on the ball but deprived them of clear cut forward options.

For the most part, Arsenal performed this shape quite well. The wide strikers cut off easy access into the fullbacks, which allowed their own wing-backs to narrow in and not be stretched by the three forwards inside on the last line. All three Arsenal midfielders man-marked their opposite numbers, also, which limited them to square passes. There was still the possibility of a breakthrough for Leicester, though, when Ndidi pushed on past Özil to receive around the corner as James Maddison dropped to the ball. 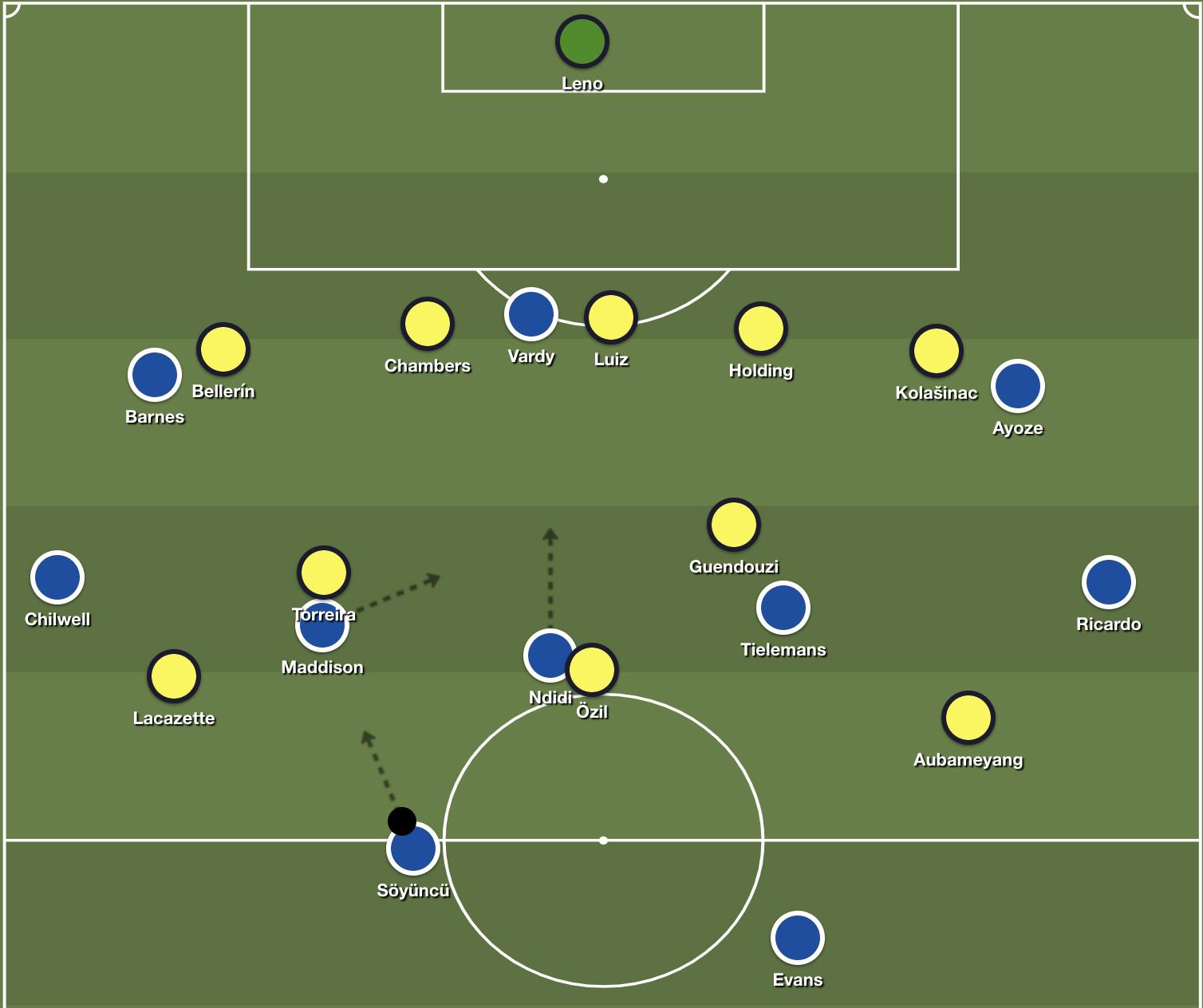 Example of Ndidi trying to break through Arsenal’s midfield setup.

This led to an early chance when Leicester managed to work it quickly from left to right – their preferred buildup pattern. What made the shift across so easy was how exposed the space in front of Arsenal’s defense was once they got between the lines. This forced the other holding midfielder in the two to narrow and thus lose track of his opponent. It also added the fullback, Ricardo Pereira, into the mix in having been previously blocked off, and, in that position, became a prominent threat when he wriggled free of the striker’s cover shadow, which he did, here, to deliver a cross for a Maddison volley put wide.

Apart from that route, there was only one other particular way that seemed to create a particular incision, which was through the forwards dropping in. For the most part, they were well followed out of defense by their respective center-back marker, which is why it mostly had not worked up and to a point, since these movements could be predicted.

It did work slightly later in the half, however, thanks to Ricardo forcing the initiative by driving into the open midfield – a midfield which allowed itself to be stretched by the positioning high, deep and/or wide by Youri Tielemans and Maddison. In this case, it was only at the last moment when Jamie Vardy dropped to link, which allowed him to sharply play it around the corner to exploit the runs off of him, and it so nearly led to a tap in for Ricardo’s continued underlap onto a teasing Ayoze Pérez cross.

Where Arsenal were most impressive was in attacking transition once they had won the ball back. What enabled them to play out of a rather suffocating Leicester counterpress was just how wide and deep the strikers were in support of playing out. Even when they were inaccessible, their pinning back of Leicester’s near-sided fullback enabled them to find the spare man through the wing-back and subsequently be more patient in their play up the pitch.

Their best move came within the opening fifteen minutes when Özil’s support for Lacazette down the left-hand-side exploited the spaces often left by lacking back-trackers from Leicester’s midfield. The best part, then, was the way they transitioned across. After triangulating with the wing-back down the left, Lucas Torreira, the far-sided central-midfielder would usually push up into the center-forward position to receive behind Leicester’s midfield, while Aubameyang held a wing-like position still. By the time it reached the wide striker, Héctor Bellerín, the right wing-back had built up a head of steam to underlap Underlap means that the full-back joins the offensive play by playing on the inside of the winger he supports. This is the reverse of an overlap, where the fullback plays on the outside and the winger moves inside. at a frightening pace. What was particularly incisive about this was the fact it was an underlap, going against the grain of the ball outwards, which could not be reacted to by the fullback who had stepped out and consequently dragged another player across instead.

On this occasion, Bellerín managed to get to the byline and pull it back into space, where Aubameyang mishit a clear shot before Lacazette did the same, as Arsenal passed up two glorious opportunities.

An almost identical move, but with the strikers reversed this time, led to Bellerín nearly charging through on goal past the half-hour mark, as his aforementioned underlap against the grain enabled him to run through the open channel. The issue here was Lacazette’s first-time layoff, which just saw the ball fall wayward of the Spaniard.

Following a tightly fought affair, in which the visitors can be rueful of their missed chances, Leicester inevitably began to push Arsenal back, or, more specifically, they got between the lines much easier. The work from the front three was decreasing exponentially, which gave midfield access to Leicester, but this was also sometimes through poor pressing by the holding midfielders, who looked a little disoriented just after the restart.

The hosts did not change much in their approach, other than some more drastic movements from Ndidi and the far-sided forward to get across to receive between the lines. The issue of most concern was how Arsenal’s double pivot 4-2-3-1 is one of the most frequently occurring formations in football. The two most defensive midfielders are called a ‘double pivot’. reacted to these situations where they had to defend on the edge of their own box.

There was little communication between the two players who had it all to do in terms of fending off the threat in front of their defense. Instead, what they did was move closely to the ball-side without ideal spacing or division of labour.

In the 49th minute, they almost paid for this as Mattéo Guendouzi and Torreira were both beaten down the right side through Ricardo’s run, who was then easily able to pull it back to Ndidi, whose effort rattled back out off the crossbar.

They were both at sixes and sevens again when Maddison almost had a clean cutback chance of his own past the hour mark. Following an unnecessary press from Guendouzi out wide, which left the center exposed, Leicester found it easy to progress before Holding’s in-between position left open substitute Demarai Gray in the inside right position behind him. An easy ball through allowed him to pull it back, but Maddison could not make a clean enough connection to make it count.

Gray was, in fact, a much-needed injection of pace into the home side’s attack – offering runs, exchanges and dribbles that Ayoze was not able to compete with when he was on. This was important in the leadup to the crucial opener, as his double movement to run into depth helped get Leicester up the pitch. From there, the exposed midfield shape came into play once again but this time, highlighting the extent of the miscommunication between the midfield pairing, they were so far split that Ricardo easily played from wide-to-in to find Barnes’ movement across, who then laid it off to Tielemans’ waltzing run from deep into the box, before completing a perfect attacking move to find Vardy at the far-post for a tap-in.

The gap in Arsenal’s shape in the leadup to Leicester’s first goal.

A sumptuous, and deserved, goal added to by Maddison fifteen minutes later after a slight tweak in system as Rodgers looked to maximize his side’s exploitation of that exposed midfield space with Maddison becoming the point of a diamond. With Emery not adapting to these blatant flaws in his setup, Leicester continued to get the better of them as, here, the hosts easily played it across the edge of the box to find Vardy, who laid it off for his teammate to drill it precisely into the bottom corner.

While Arsenal were very much guilty of gifting Leicester opportunities, they were not shy of attacks themselves, still, it was just that they had no chances to show for it.

Özil was the only player really breathing life into these attacks, picking up excellent positions down the left, center and right throughout the half to link play in transition. The wide duos attacking either side create good overloads, When one team has more players in a certain area or zone than the other team. but the crosses were so easily defended because they were always aimlessly floated deliveries to no-one in particular.

Aubameyang came the closest on one of these crosses as Sead Kolašinac managed to drill one in for him to convert but he was correctly ruled offside.

Emery attempted to change it up with the 4-2-3-1 alteration when chasing the two-goal deficit but it was comfortably contained as the hosts saw out the game for a 2-0 victory. 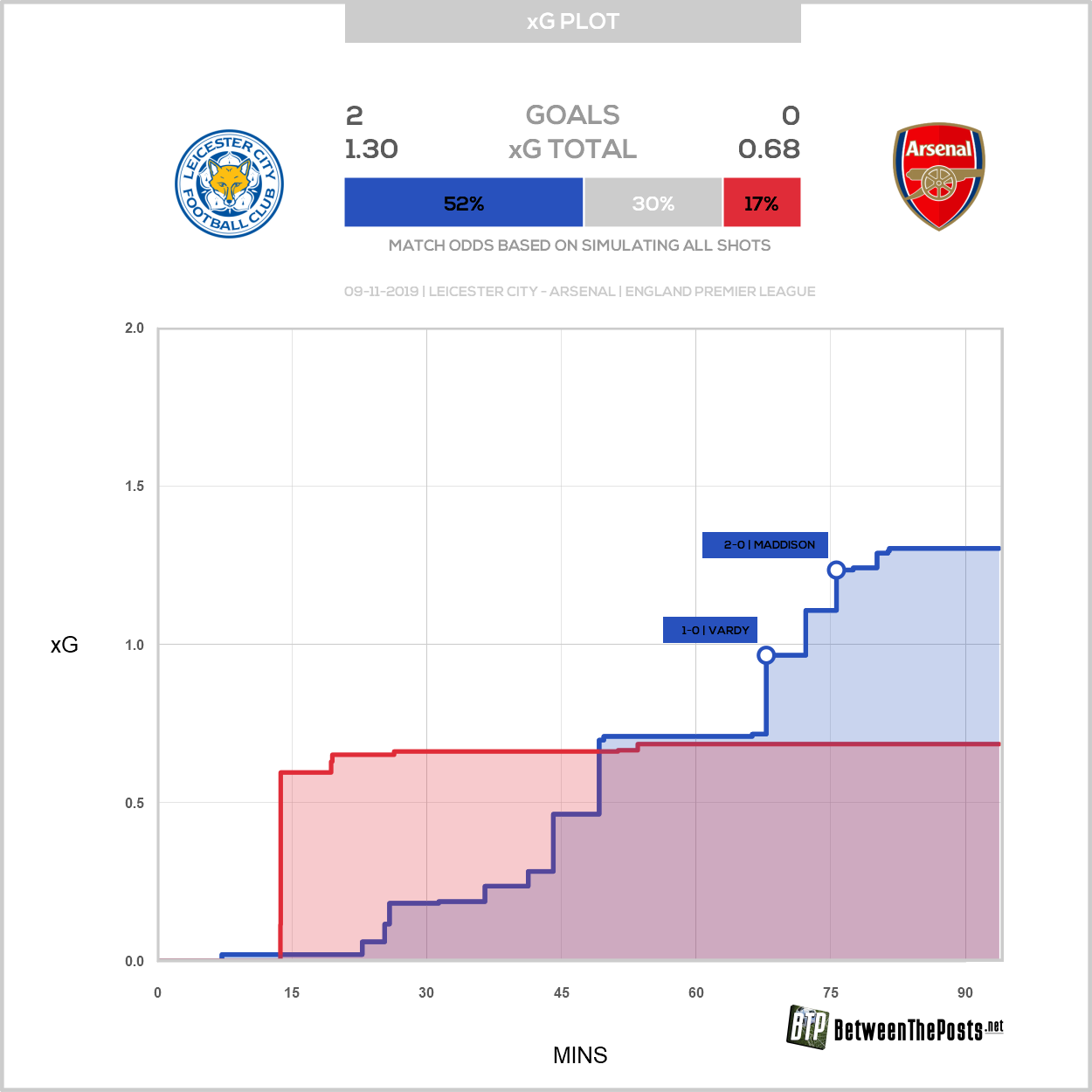 Brendan Rodgers’ side keep marching on as they returned to second place, opening up a nine-point gap over fifth, putting them firmly in a position to be strong top four contenders this season.

And, while Emery’s dismissal is not as close as many fans would like, there are minor positives to be taken away from the first half display but little could be said in defense of their second half performance, where they seemed to fall into disarray, and were deservedly pushed aside. 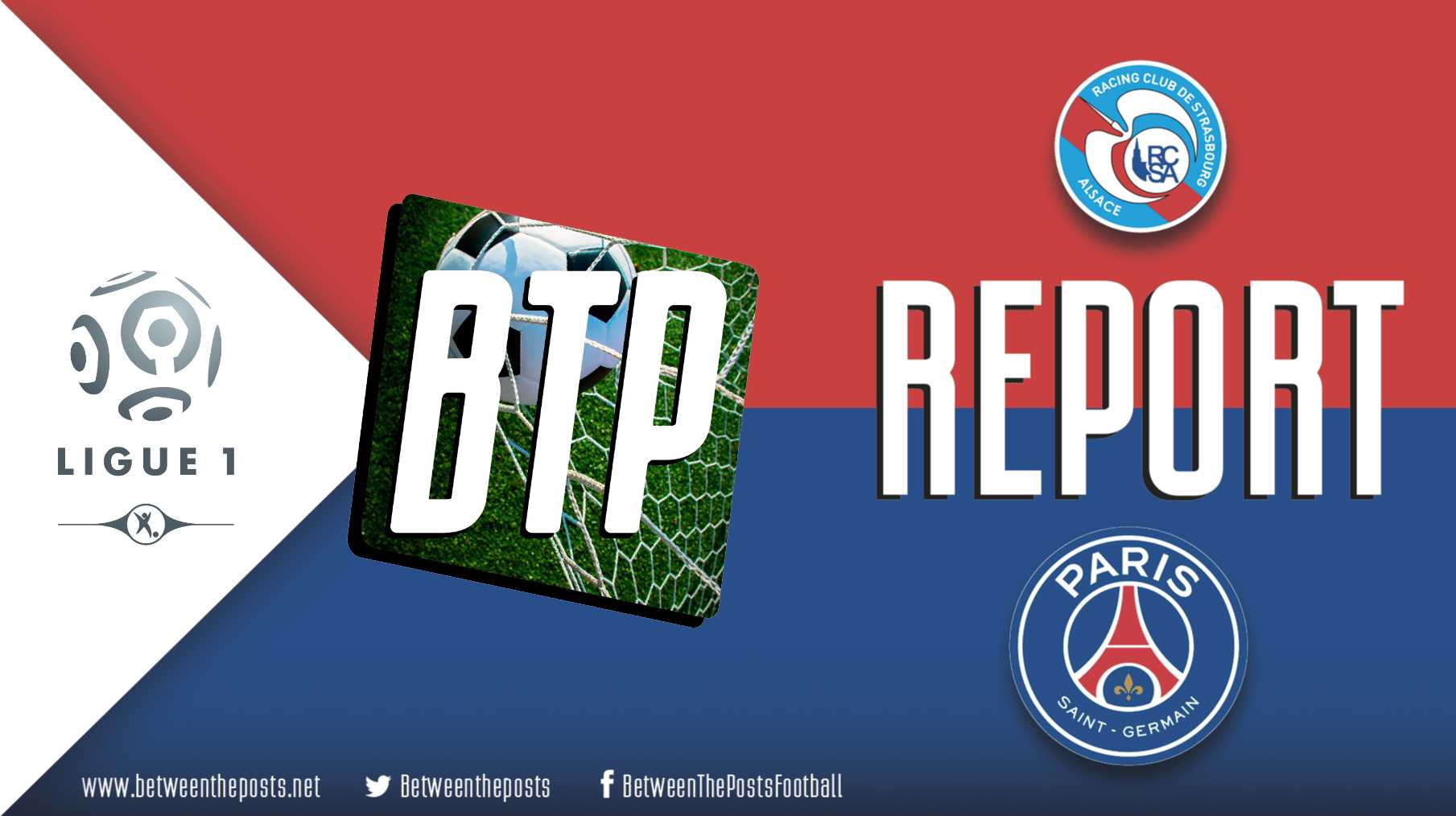