Lille dominated large swaths of the match, but a familiar lack of finishing allowed a rather disjointed Montpellier team to see their way back into the match. Nevertheless, it was an eighty-fourth minute goal from the reinvigorated Renato Sanches that handed the hosts a much deserved victory.

Saddled with a number of new signings and frustrated by the loss of several key players over the summer, it took time for Lille manager Christophe Galtier to bed-in the squad’s new arrivals and rediscover the balance that made Lille so formidable last season. However, nearly halfway through the campaign, it appears Galtier has done just that, as LOSC finally look to have a settled starting eleven capable of emulating last season’s exciting brand of counterattacking football.

Galtier took the opportunity provided by a meaningless midweek Champions League fixture, to rotate his squad – resting the bulk of his starting eleven for his side’s Friday night engagement with visiting Montpellier. Galtier seems to have landed on Domagoj Bradarić as his starting left back to play alongside 21-year-old center-back Gabriel. In the middle of the park, making up the double pivot 4-2-3-1 is one of the most frequently occurring formations in football. The two most defensive midfielders are called a ‘double pivot’. in Lille’s preferred 4-2-3-1 system, were Benjamin André and young stand-out, Boubakary Soumaré. Meanwhile, Sanches reprised his role on the right side of the attacking midfield three, while Victor Osimhen drew back in as the lone striker.

Conversely, with no European football on their agenda, Montpellier were coming off a full week of rest after a hard-fought defeat to Paris Saint-Germain in the previous round. Michel Der Zakarian’s side has been battling near the top of the table all season, but as of yet have been unable to get over the hump and maintain a place in the top four.

Montpellier has toyed with their midfield formation throughout the season, but have preserved a back-three. Against Lille, Der Zakarian elected to start with a 3-4-1-2 shape with few surprises in the starting eleven. The 18-year-old academy product, Joris Chotard got another start in midfield, alongside summer acquisition and set-piece specialist, Téji Savanier, as the recognizable front three of Florent Mollet, Andy Delort and Gaëtan Laborde were tasked with providing the bulk of the offense.

From the outset the Montpellier buildup was flawed and it continually put them in unenviable positions defensively. The visitor’s intended to develop play using their three center-backs at its base, while the fullbacks stretched the field wide and the front-three looked to pin the Lille backline high up the pitch. Unfortunately, while this meant the field was amply stretched the midfielders held positions too far high up the pitch – leaving a significant gap between the defensive line and any prospective pass. 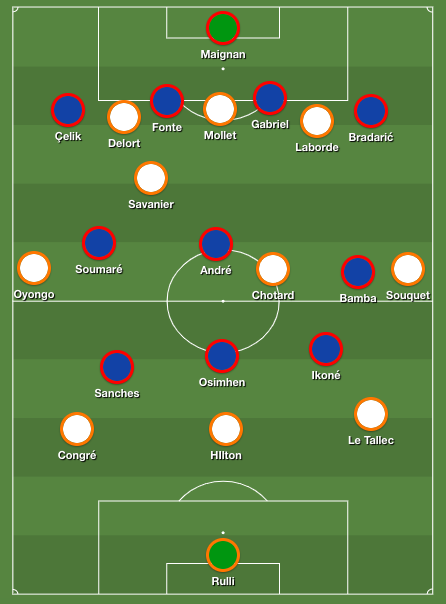 Lille pounced on this poor structure and brought plenty of pressure from a front three of Osimhen, Sanches and Jonathan Ikoné, who initially forced a number of misplayed balls, which ended up in the feet of Soumaré, André or Jonathan Bamba. At which point, the hosts were able to transition into the large gaps left by the expansive MHSC buildup. It took several deft tackles from, Captain, Vitorino Hilton, to keep the match level early on.

Conversely, Lille enjoyed plenty of success in their buildup throughout the fixture and, for the most part, were dangerous in their attacking sets against Montpellier’s 5-3-2 low-block. Lille endeavoured to play themselves off the wings and into the halfspaces If you divide the field in five vertical lanes, the halfspaces are the lanes that are not on the wing and not in the center. Because there is no touchline like on the wing, players have the freedom to go everywhere. But this zone often is not as well-defended as the very center. This makes it a very valuable offensive zone to play in and a lot of chances are created by passes or dribbles from the halfspace. by coaxing the visiting wing-backs into isolated positions on the flanks and then having their own fullbacks play combinations with the wide players, who eventually found themselves at the edge of the area looking to play in Ikoné or Osimhen. Once again, it took a number of swift challenges from Hilton to see off these early probes. 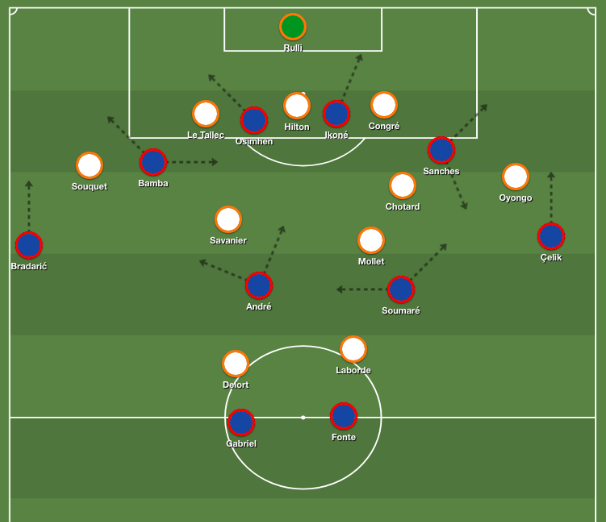 On top of this, Lille varied their distribution long – having goalkeeper, Mike Maignan, play long balls to Osimhen, who would casually drift toward the right touchline. The Nigerian international would then attempt to nod the ball down to Sanches, whose technique and physicality caused innumerable issues for the Montpellier defense all evening. What is more, as is generally the case, LOSC continually looked to put balls in over the top to the sprinting Osimhen – stretching the field and in the process forcing the defender to be constantly alert to such a potentially dangerous play.

It would eventually be a ball played into open space that found the on-rushing Osimhen that led to him being taken down in the box by the visiting keeper and earning his side a penalty. Ikoné dispatched the spot kick professionally and the home side took the lead in the fortieth minute.

Lille struggle to put the match away

The second half was more of the same from Montpellier, who could not seem to find a way to establish any type of threating offensive set in the attacking third. Galtier’s side had hunkered down into their well-drilled 4-4-2 defensive shape – funnelling Montpellier out toward the flanks where possession was quickly gobbled up by the hosts. It was in this phase that André continually displayed his tactical nous – always arriving in the appropriate areas and nullifying the usually dangerous Savanier. 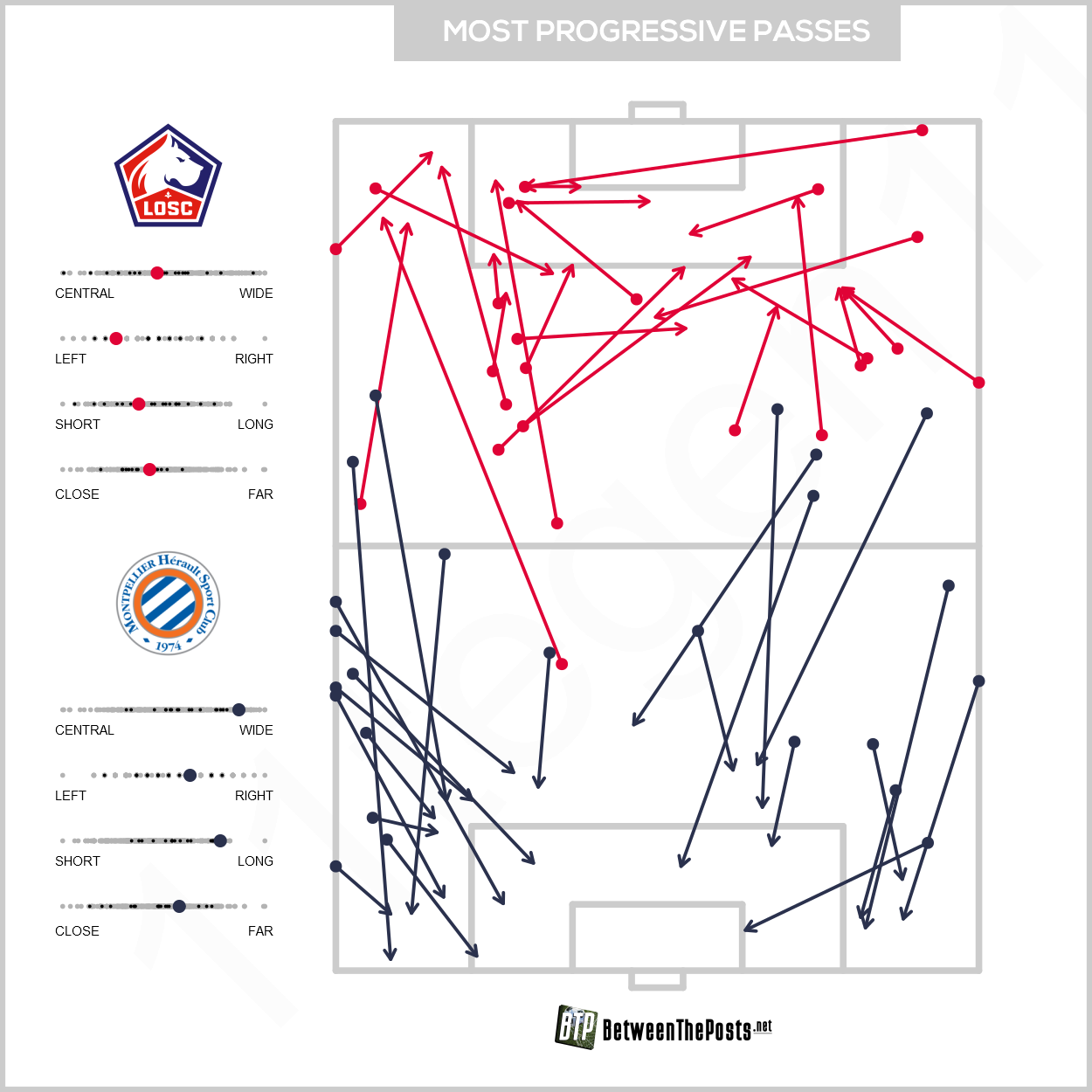 However, for all their possession and dominance, Lille could not put the match away by collecting the all-important second goal. The depth of the Montpellier back-three made if difficult to both find any brand of successful cross, as well as bypass the defensive line and gain entrance to the box.

LOSC’s inability to kill the game would come back to bite them in the seventy-fourth minute, as the wingback, Arnaud Souquet, floated a casual ball into the box, which was flicked on Mollet and landed in the path of Delort, who tucked it in at the back post – tying the match at one. It was an unnecessary goal, as Lille had packed the box with defenders, all of whom were caught napping and now at risk of losing a match they had so dominated.

Galtier responded by taking off Bamba and replacing him with Luiz Araújo – a move that shifted Sanches to the left flank. A subtle change that ended up paying dividends, as Araújo earned a throw-in in the attacking third, which was then followed by an extended spell of possession from Lille, who eventually knocked the ball back to Gabriel. The Brazilian then played a lovely, hard ball into the feet of Ikoné, who flicked it into open space where it found Sanches. The Portuguese then rushed into the space behind a staggered Montpellier backline and let go of a tremendous curling strike that flew inside the post – giving LOSC a 2-1 lead in the 84th minute.

Sanches’ brilliant run allowed Lille to settle back into their defensive mindset where they were able to kill off the game – even getting a chance at the penalty spot to extended their goal tally. However, Osimhen missed the kick and Galtier’s side would have to settle for a one goal victory.

Lille seem to have rediscovered their form from last season and Galtier finally seems settled on a starting eleven after having experimented with a number of different lineups through the early portion of the campaign. The most crucial factor in the club’s re-emergence is the decision to move Sanches onto the right flank where he has been given a more-free role and as a consequence has been nearly unplayable in his last two starts. If LOSC can continue to put in performances such as this, while finding a way to kill matches off with more ruthless finishing, they are going to be very difficult to keep out of the top three.

It was always a tough ask for Montpellier to go and take three points off of Ligue 1’s best home side. Nearly escaping with one point may satiate some supporters, but the inept buildup play is somewhat concerning. Chotard is still learning his trade at the top level and was exposed by a much more professional midfield in Sourmaré and André. It has never been so obvious how much the club miss the injured Jordan Ferri, who is not set to return until the end of January. Going forward it will be up to Chotard to improve, or perhaps for Savanier to take up a deeper role. 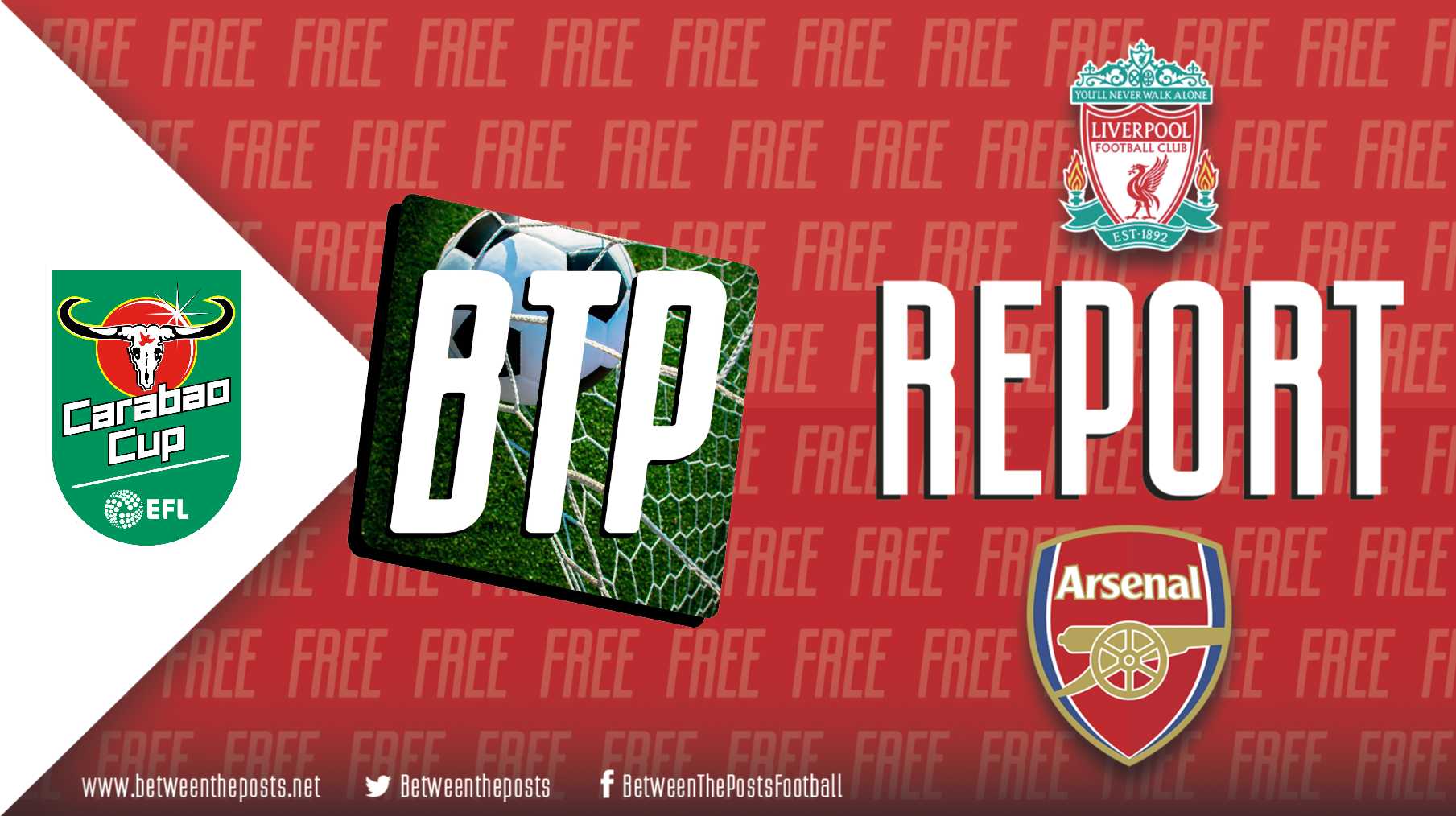