Much of the first half of this Manchester Derby was defined by Manchester United’s quick transitions. Manchester City had promising attacks of their own, but their defensive intensity was below usual standards, which partly allowed United to go 2-0 up within thirty minutes. City made slight adjustments to stem the flow of counterattacks and attempted a comeback in the second half, which was ultimately unsuccessful.

Manchester United’s 2-1 win over Tottenham Hotspur in midweek would have helped restore some confidence amongst Ole Gunnar Solskjær’s squad after some disappointing results in the weeks prior.

A trip to the Etihad Stadium always promises to be a completely different challenge though, even if Manchester City have shown weaknesses this season. Pep Guardiola’s team also won in midweek, with a commanding 4-1 victory at Burnley. Pressure is on City to keep the results coming if they want to have any chance of catching Liverpool at the top of the table.

United manager Solskjær made two changes from the team that beat Spurs on Wednesday. After a brief substitute appearance in midweek, Luke Shaw was selected to start at left back instead of Ashley Young. Secondly, they were boosted by the return of Anthony Martial, who took up the number nine role in their 4-2-3-1 system, replacing Mason Greenwood who dropped to the bench along with the aforementioned Young.

Guardiola meanwhile made just one change from City’s win over Burnley, as Nicolás Otamendi made way for John Stones to partner Fernandinho at center-back in their 4-3-3 shape. Ahead of them, Rodri was the number six behind Kevin de Bruyne and David Silva. Gabriel Jesus again started as striker in the absence of Sergio Agüero, with Bernardo Silva and Raheem Sterling on the wings. 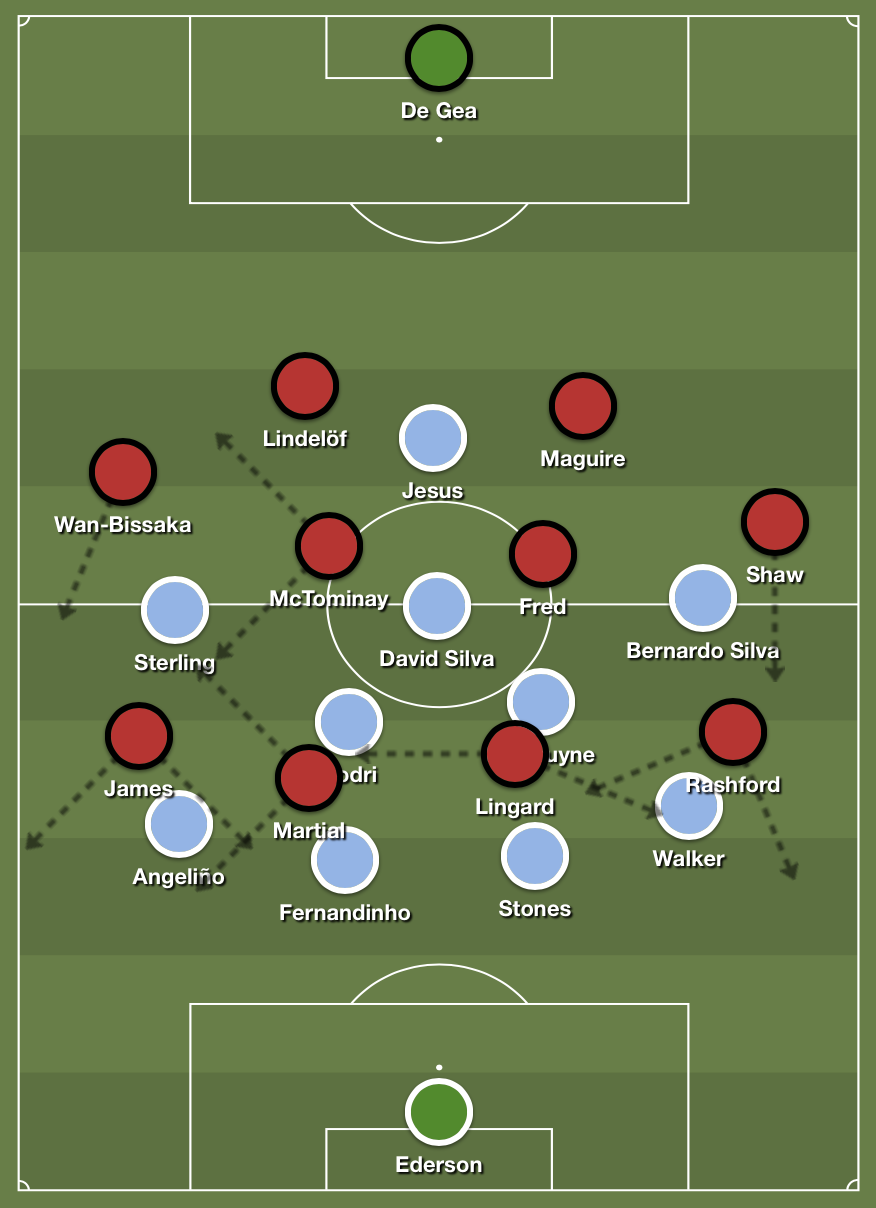 The game started in quite an end-to-end fashion for much of the opening exchanges. Both teams had moments of transition and were getting the ball into the feet of their quick attacking players. As the half progressed, City were taking ownership of the ball, but many of the promising attacking moments were falling to United.

United’s attacks were dangerous but usually relatively brief, which rather suited them as they are more comfortable in transition moments going forward than they are with organized possession phases, where they can struggle.

Having said this, they were able to put together a few decent moves, especially against the pressing of City, which seemed to lack intensity at times. In this phase, as usual this season, they transitioned into a 4-2-3-1 shape with David Silva moving to number ten and De Bruyne dropping alongside Rodri in central midfield.

In the moments where they did get possession, a similar structure could be seen to that shown against Spurs in midweek, where Lingard as the number ten would tend towards the left halfspace, If you divide the field in five vertical lanes, the halfspaces are the lanes that are not on the wing and not in the center. Because there is no touchline like on the wing, players have the freedom to go everywhere. But this zone often is not as well-defended as the very center. This makes it a very valuable offensive zone to play in and a lot of chances are created by passes or dribbles from the halfspace. sometimes interchanging with Rashford on the left wing.

Meanwhile the striker, in this case Martial, would often appear in the right halfspace, looking to link play and potentially combine with Dan James on the right wing. James himself ended up being a key threat for United as the half unfolded, as he found himself able to run in behind Angeliño on a few occasions, with the left back unable to deal with the sheer pace of James, especially in transition.

Rashford on the other wing naturally also offered a threat in counterattacks, although it was slightly more difficult for him in terms of his direct opponent Kyle Walker, who on a couple of occasions was able to use his incredible recovery pace to stop potentially dangerous situations developing for Rashford on the break.

Rashford was still able to make something happen though, as he was brought down in the penalty box by Bernardo Silva just after twenty minutes. Rashford then converted the penalty to put United 1-0 up.

Less than ten minutes later, Martial was able to put United 2-0 up. After combining with James on the edge of the box, he struck a left footed shot which beat Ederson and found the net via the post.

City’s possession shape initially in this game was again similar to the one utilized in their previous match against Burnley. From a starting 4-3-3 shape, they often formed a defensive diamond in buildup, with essentially three number tens in front. 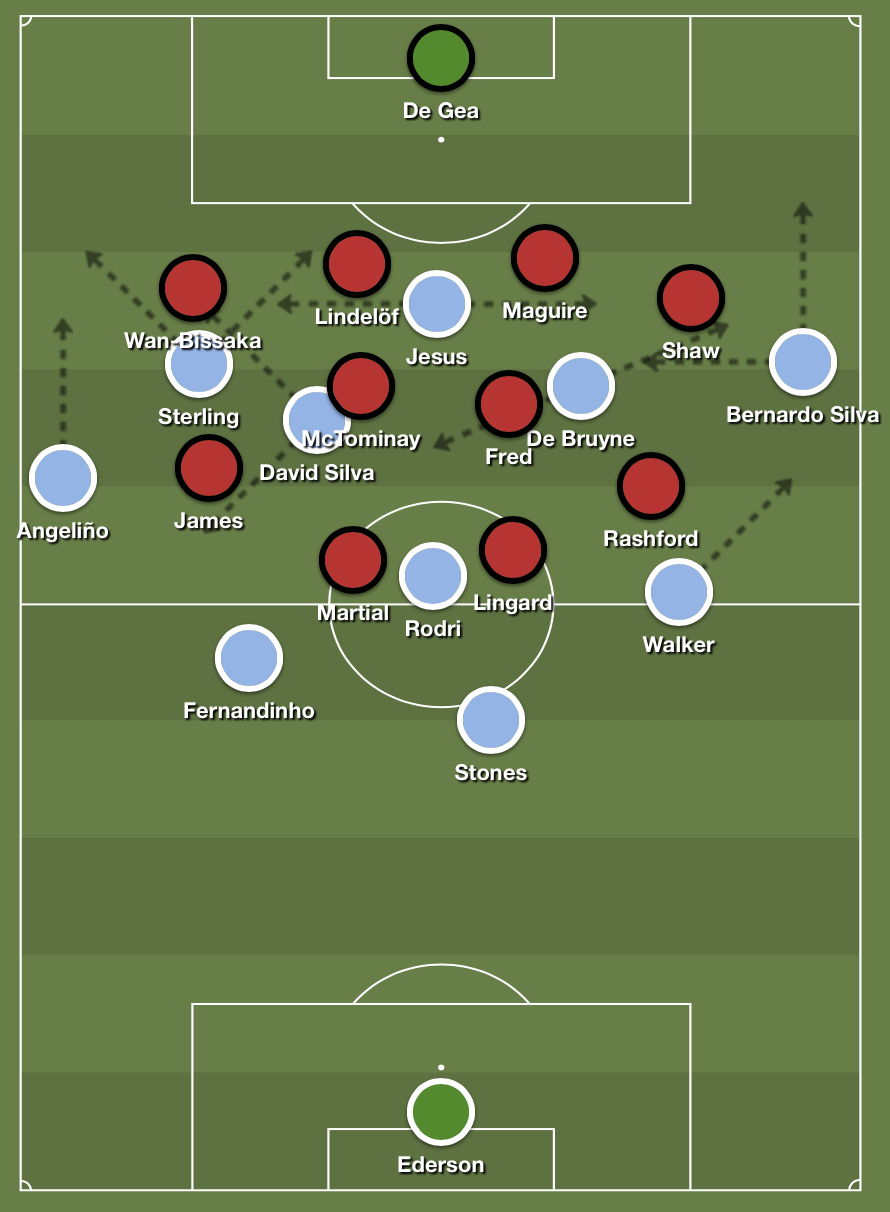 They did this firstly with the asymmetry of the fullbacks. Walker would usually stay deeper around the right halfspace alongside Stones and Fernandinho. Rodri would then sit in front of the aforementioned three players, forming a diamond shape.

The other fullback, Angeliño, would push up on the left wing into advanced positions to offer width while Sterling moved inside towards the left halfspace. Sterling could look to stretch the United defense with runs into depth in behind Aaron Wan-Bissaka, or drift between the lines acting as essentially a third number ten alongside David Silva and De Bruyne.

As usual, De Bruyne was involved with plenty of interactions with Bernardo Silva on the right side, with the recognizable pattern of the Belgian making runs in behind the opponent’s fullback as Bernardo Silva cuts inside onto his left foot, hoping to open space for the winger to cut into or receive a reverse pass in behind.

In this game though, De Bruyne was usually well marshalled by Fred in this aspect, who worked diligently to protect the channels behind Shaw. Scott McTominay operated with similar tenacity in the right sided channel for United. With their roles in protecting the halfspaces from the likes of David Silva and De Bruyne, the distances between United’s central midfielders could become slightly enlarged, opening the route for passes into the feet of Jesus centrally, but City were unable to make this substantially dangerous.

There was also some promise on the left side at times for City with the understanding between Sterling and David Silva. They also had the option of Angeliño on that side, however the Spaniard was unable to create much danger in the final third. The one-third of the pitch that is closest to the opposition’s goal.

About midway through the half, Angeliño’s role was changed. This was probably mostly in an effort to control United’s counterattacks, which were causing City worries as already mentioned. Angeliño now moved into more of an inverted fullback role in City’s possession structure, while Sterling more often held the width and David Silva stayed between the lines as usual. 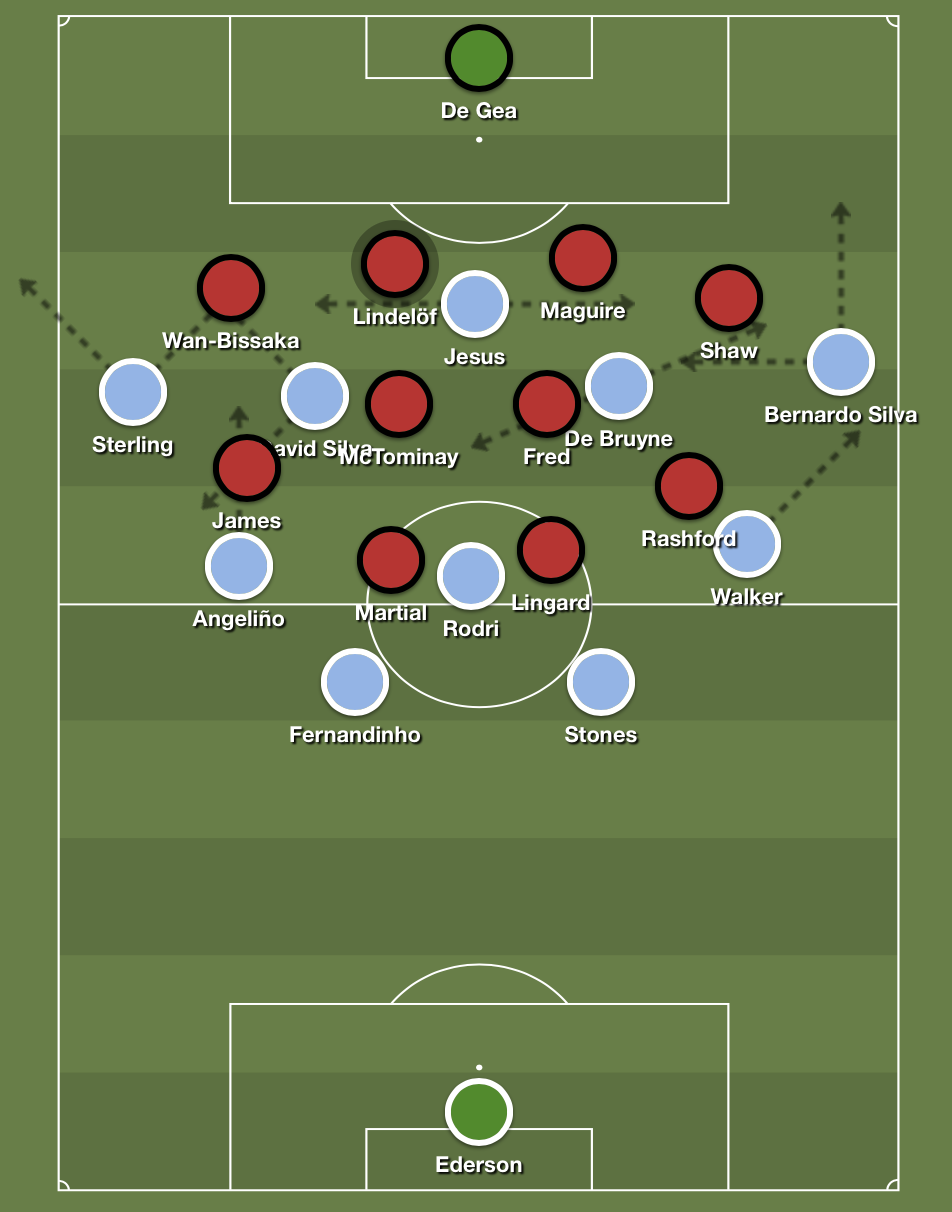 The frequency of United’s counterattacks did seem to dry up somewhat after this change, but another knock-on effect was the individual duel that emerged between Wan-Bissaka and Sterling in one-versus-one dribbling, now that Sterling was more often close to the touchline.

Wan-Bissaka did well overall, despite Sterling being able to gain a yard on him on a couple of occasions. These interactions were deemed promising enough for City to increasingly use Sterling as an outlet as the half went on, with switch passes A pass from one side to the other. being played towards the left for Sterling to run at Wan-Bissaka in isolation.

The home side came out in the second half with a slightly improved intensity and were able to start pinning United back in their own third to an even greater extent than in the first half. Whereas United had thrived on transition situations in the first half, the supply of counterattacking opportunities for the United forwards was decreasing as the match went on.

City’s center-backs were seemingly more aggressive in counterpressing After losing possession, a team immediately moves towards the ball as a unit to regain possession, or at least slow down the pace of the counterattack.
and positioning themselves slightly further forward to try and push United back further and stop counterattacks at source. This left larger spaces behind them to be exploited by United’s pace, but United also found it more difficult to break out in the first place.

Guardiola’s first substitute of the game was an enforced one, as Stones was forced off through injury, meaning Otamendi was needed from the bench. Shortly afterwards he also introduced Riyad Mahrez in place of Bernardo Silva, potentially seeking a more direct one-versus-one threat from the right side.

Eventually City returned to their previous attacking structure with Angeliño again starting to push up and provide with on the left while Sterling more often moved inside. De Bruyne at this point was playing a very free role, roaming to both wings and into deeper central areas to try and put his vision and passing range to use in finding a breakthrough for City.

City continued to exert long periods of pressure on the United defense, but United were mostly able to crowd them out around the penalty area, aided by a couple of vital defensive blocks and David De Gea saves. Finally though, in the 85th minute, Otamendi gave City their breakthrough with a header from Mahrez’ corner delivery.

However, this was as good as it got for City. They were unable to make the final push for an equalizer. In reaction to the goal, Solskjær brought on Young and Axel Tuanzebe in place of Shaw and Lingard, as United went to a 5-4-1 to add numbers to the defensive line and ultimately see out the win. 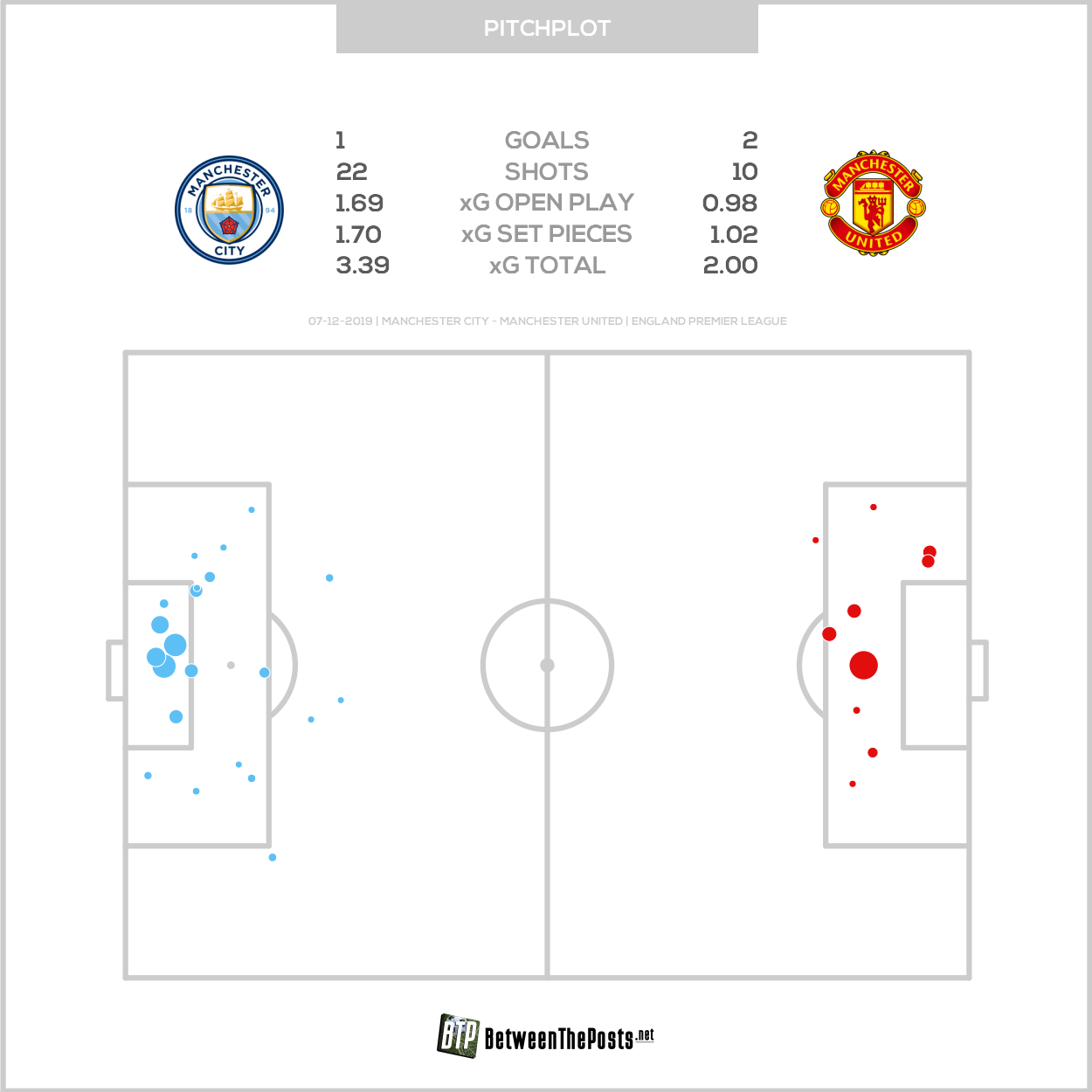 United seem to have a habit of raising their level for big games under Solskjær, perhaps because the generally more proactive nature of the top six teams gives United more opportunities to counterattack, where they excel. This result, combined with the earlier win against Spurs, will temporarily at least take some pressure off Solskjær and the players, as well as giving them confidence going into the busy Christmas period.

For City meanwhile, the result puts them even further off the pace at the top of the table, and is another demonstration of their vulnerabilities in defensive transition this season, where the counterpressing machine seems to no longer be functioning as seen in previous seasons under Guardiola.

Unfortunately, it should be mentioned that the game was also marred by a second half incident in which United player Fred was seemingly the victim of racial abuse by fans in the Manchester City section, who also threw projectiles in the direction of players.