With critics to be proven wrong, and a return to the top four at stake, the expectation was high for the latest edition of the Manchester derby. However, both teams produced a limited, lethargic and lackluster affair, with bad buildup structures being cancelled out by tangible defensive organizations.

After Leipzig exploited major issues to knock Manchester United out of the Champions League, the prospect of beating their closest companions offered a huge uplift for Ole Gunnar Solskjær. The matchup against Pep Guardiola has enabled them to deploy their counterattacking scheme to the full, winning three of the last four derbies prior.

Though Man United are still picking up results in the league, structurally they still heavily rely on the work of Bruno Fernandes and their defensive work remains individualistic, rather than cohesive. The goals they concede can’t be without pundits pointing at those in the defensive line making errors, rather than the way the manager shapes the team.

Manchester City are another team whose results have improved, without looking entirely convincing. In recent performances, Guardiola has favored the double pivot Two central midfielders next to each other. in buildup, which has seen their fullbacks operate more functionally as fullbacks, rather than dropping centrally. However, Man City still look one-dimensional in the final third, The one-third of the pitch that is closest to the opposition’s goal. funneling a lot of their creativity through Kevin De Bruyne.

Solskjær made two changes from the Leipzig game: both Alex Telles and Nemanja Matić were replaced by Fred and Paul Pogba, respectively, rotating their shape from a 3-4-1-2 into a 4-3-1-2 formation. Guardiola made a vast number of changes from their win over Marseille, having already qualified for the next stages. Sticking to the 4-2-3-1 formation, Kevin De Bruyne, Raheem Sterling and Gabriel Jesus all returned, while Sergio Agüero still missed out.

On the ball, Man City didn’t assert themselves in the opposition half like they usually do – in fact, it was Man United who were continually attempting to build in the first ten minutes.

On paper, Solskjær’s team initially looked to play in the diamond. However, with Paul Pogba wide on the left, Bruno Fernandes roaming into the right channel, and the two remaining midfielders as part of the same line, they resembled more of a 4-4-2 formation in possession of the ball. 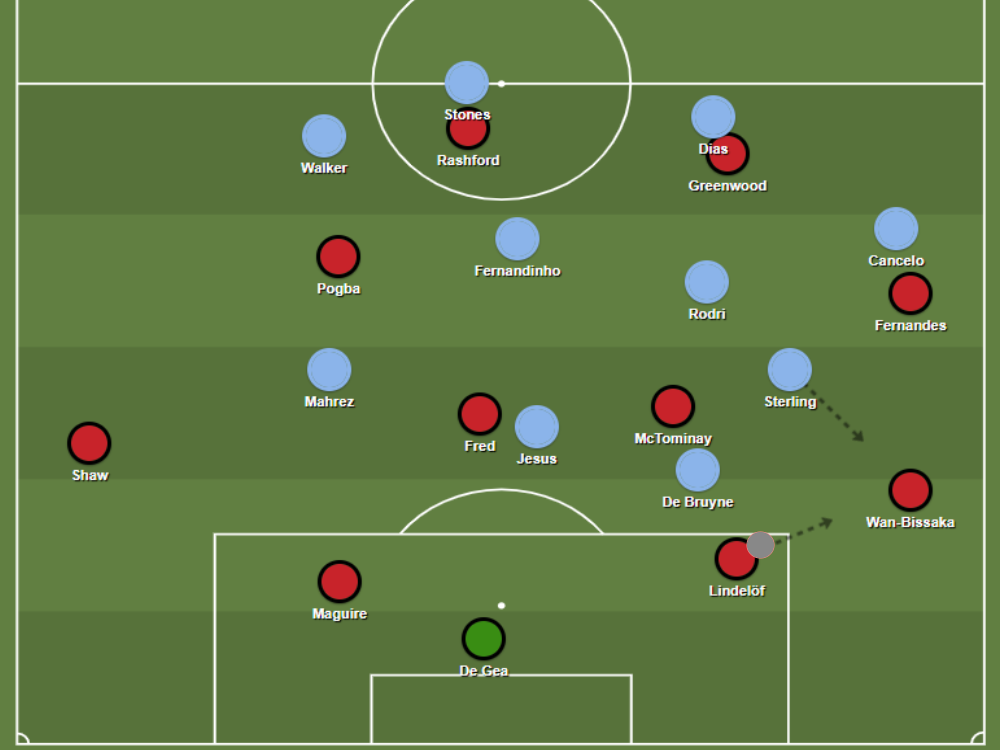 This was perfect for Man City to deploy an effective press out wide, who matched their shape in a 4-2-4 formation, as De Bruyne joined the forward line. Both him and Gabriel Jesus didn’t close down the center-backs but remained high and cut the passing lanes into their opponent’s double pivot. As a result, Harry Maguire and, more notably, Victor Lindelöf would make a lateral pass towards the fullbacks, which activated an aggressive pressing trigger from the ball side winger. A pressing trigger is a specific pass or movement by the opponent that draws out a coordinated team press.

Raheem Sterling was effective at closing space for Aaron Wan-Bissaka, who was aided by Fernandes dropping deep and receiving the ball. Despite not directly creating a turnover, Man City heavily disrupted their opponent’s buildup and would often force a misplaced pass because of their pressing triggers. Fortunately for Man United, they couldn’t keep their transitions clean or move the ball quickly enough to turn these pressing sequences into direct shots at goal.

The buildup shapes of Man City

For the first ten minutes, Guardiola kept his team in the 4-2-4 formation when in possession. These moments would often come when they were in transition, but Rodri and Fernandinho lacked the penetration and pace in these situations to thread the passes forward.

After the first stages of the game, Man City’s shape evolved into a 3-1-6 buildup scheme; a familiar setup to the way Hansi Flick’s Bayern Munich often establish themselves. Fernandinho dropped into the defensive line, though Rodri could also take up a similar position, while Kyle Walker and João Cancelo hugged the sidelines to maintain the width.

What was particularly un-Bavarian, though, would be the severe lack of tempo across the team and limited rotation amongst the forwards. Without the attackers dropping deep, or making movements between the lines, Man City’s shape generated bad circulation in the middle third, If you divide the pitch in three horizontal zones, the middle third is the most central area. incapable of progressing into the final. 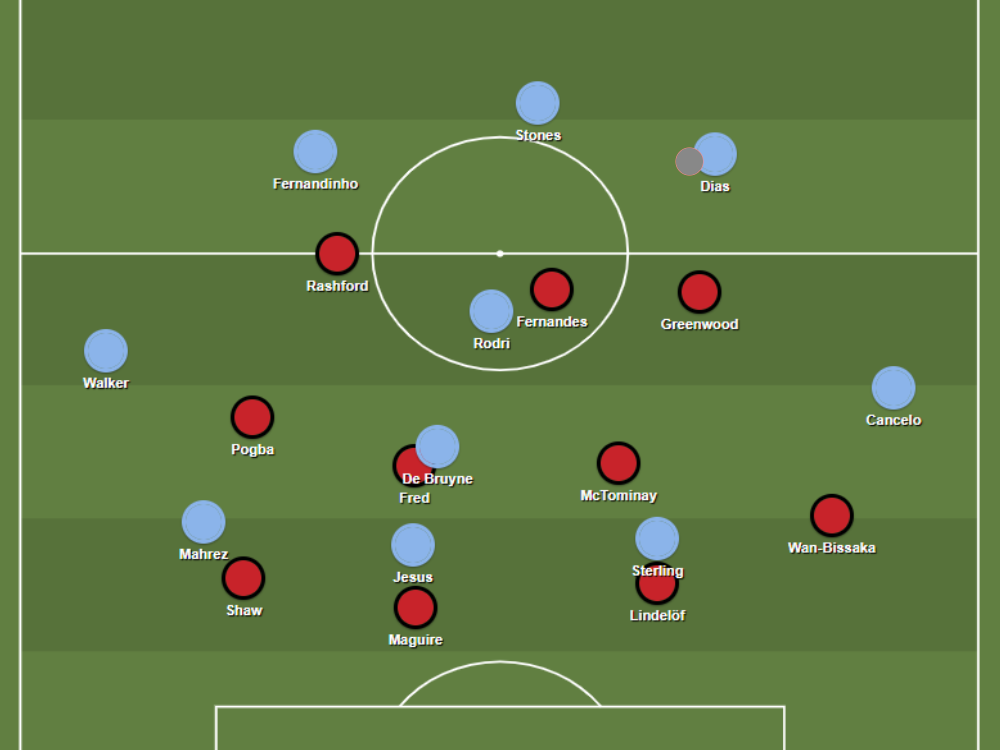 The disconnect between midfield and attack can also be credited to Man United’s off the ball shape. They did have moments where they applied more pressure, but in most defensive sequences, Man United held their asymmetric 4-3-3 shape, with Mason Greenwood higher up than Pogba and Fernandes as part of the forward line. As a result, they were able to match their opponent’s defensive line and were able to get the occupation down the channels, which initially looked like a good route for Man City to progress down.

Guardiola alternated his team’s shape once again after the half-hour mark, which saw the return of the 3-2-5 system we had originally become accustomed to when watching his team recently. They resembled this shape in two different alterations. The first would be Walker joining the defensive line, as the double pivot remained ahead of them, with Cancelo and Riyad Mahrez hugging the sidelines. The second would be the original structure, but with De Bruyne dropping deep to collect next to the single pivot. Teams vary in the number of midfielders they place in defensive positions during buildup. In systems like a 4-3-3 or 4-3-1-2, usually a single midfielder plays closer to the defense, for protection, but also for buildup play in the center of the pitch. The player is called the ‘single pivot’, to contrast with the ‘double pivot’ in systems like a 4-2-3-1.

Man City rotated and tinkered with the shape, but without the off-ball movements, dynamism, or interchanges to access space – they failed to progress out of the middle third. The severe lack of tempo further blunted the Guardiola attack, perhaps because he was cautious of his opponents counterattacking threat, but in doing so their effectiveness on the ball reduced. They finished the half having taken just four shots, and just one shot on target apiece in the same time period.

Game grinds to a halt

The second half was a combination of both team’s poor buildups, meeting slightly better defensive structures to stop shot creation all together.

Man City reverted back to the 4-2-4 buildup that they had formerly started with, but with the same glaring issues. Both Cancelo and Walker’s incisiveness to operate more in their inverted roles resulted in width not being properly maintained in the construction phase. Combine this with suboptimal occupation between the lines, and Man City looked as limited as they’ve ever been under Guardiola’s management at the club.

Man City’s narrow 4-2-4 passing structure failed to open up space for the receivers and resulted in very limited exchanges in the final third.

Man United failed to offer much either. Solskjær slightly tinkered with his team’s shape, with Pogba moving centrally and Fernandes roaming more into the left channel, to try and combine with Rashford. This didn’t add much to their approach, with Pogba still not involved in buildup sequences and Fernandes unable to laterally move across the field to combine. Man City were also well organized in regrouping into their 4-4-2 shape off the ball, before moving their opponents backwards where they could operate in the 4-2-4 formation.

As a result of these factors, the Manchester derby grinded into a passive, slow and lethargic affair. Solskjær’s team completed just 22 passes in the final third after half time, most of these thanks to long balls into the area, whilst Man City’s 75 passes failed to break into the penalty area.

With both managers making just one substitute each, and neither really changing their team’s shape, there was no real aspiration to take a risk for two more points – or at least give off that impression. Just two shots on target apiece, across the full ninety minutes. 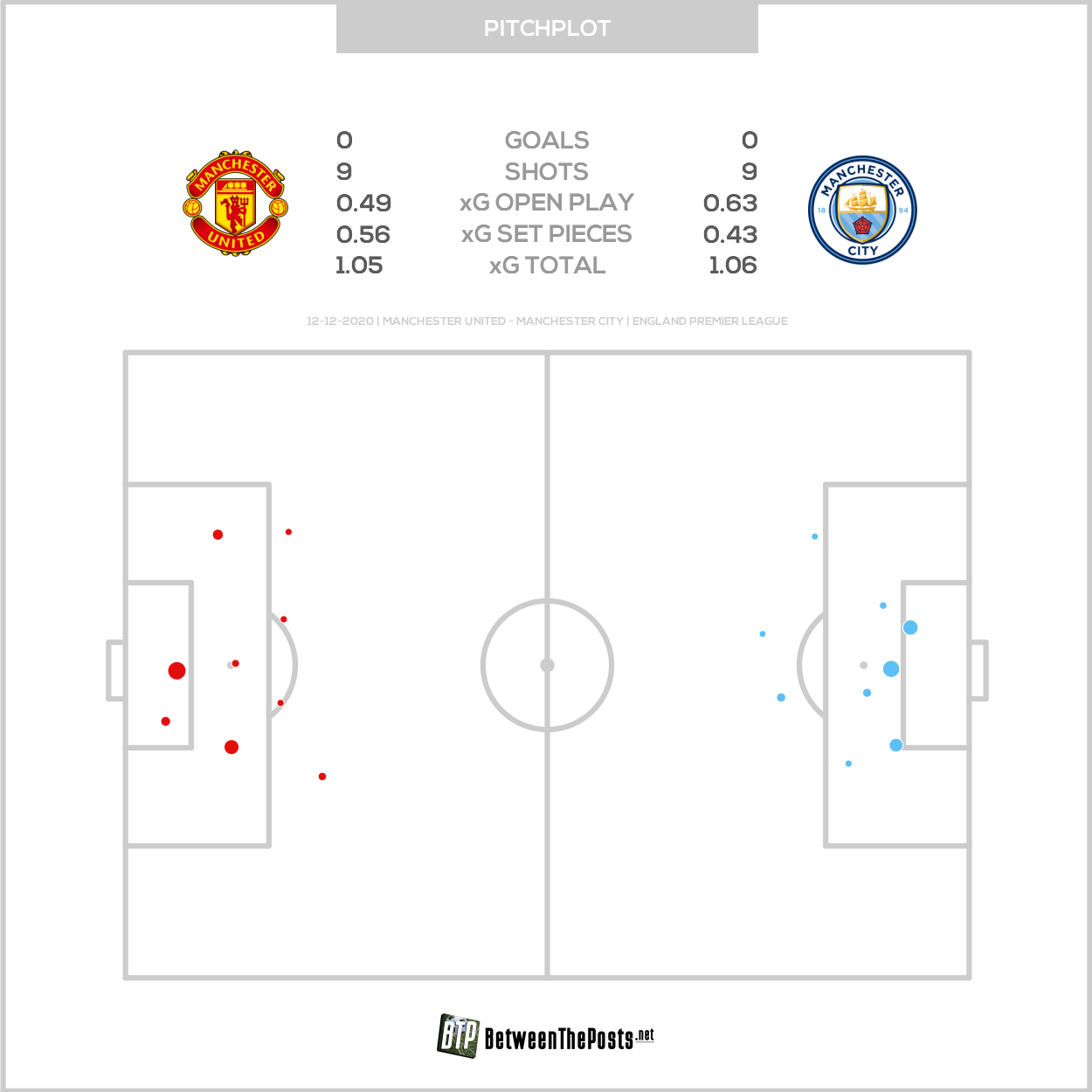 After midweek trauma, maybe a stalemate with their cross-city rivals is a lot more calming for Solskjær than anyone else. For the most part, Man United defended compactly and kept the channels occupied, thanks to the split-striker system out of possession, but their game plan seemed to forever wait for their transitional play to kick in. They still need more ways to attack, so perhaps Sheffield United during midweek could reveal new ways.

Guardiola has seemed to find a route to keeping their opponent’s counters nullified, but at a grave cost to their positional play and sheer efficiency in the final third. They might be keeping clean sheets but attacking like this will not consistently win them football matches. 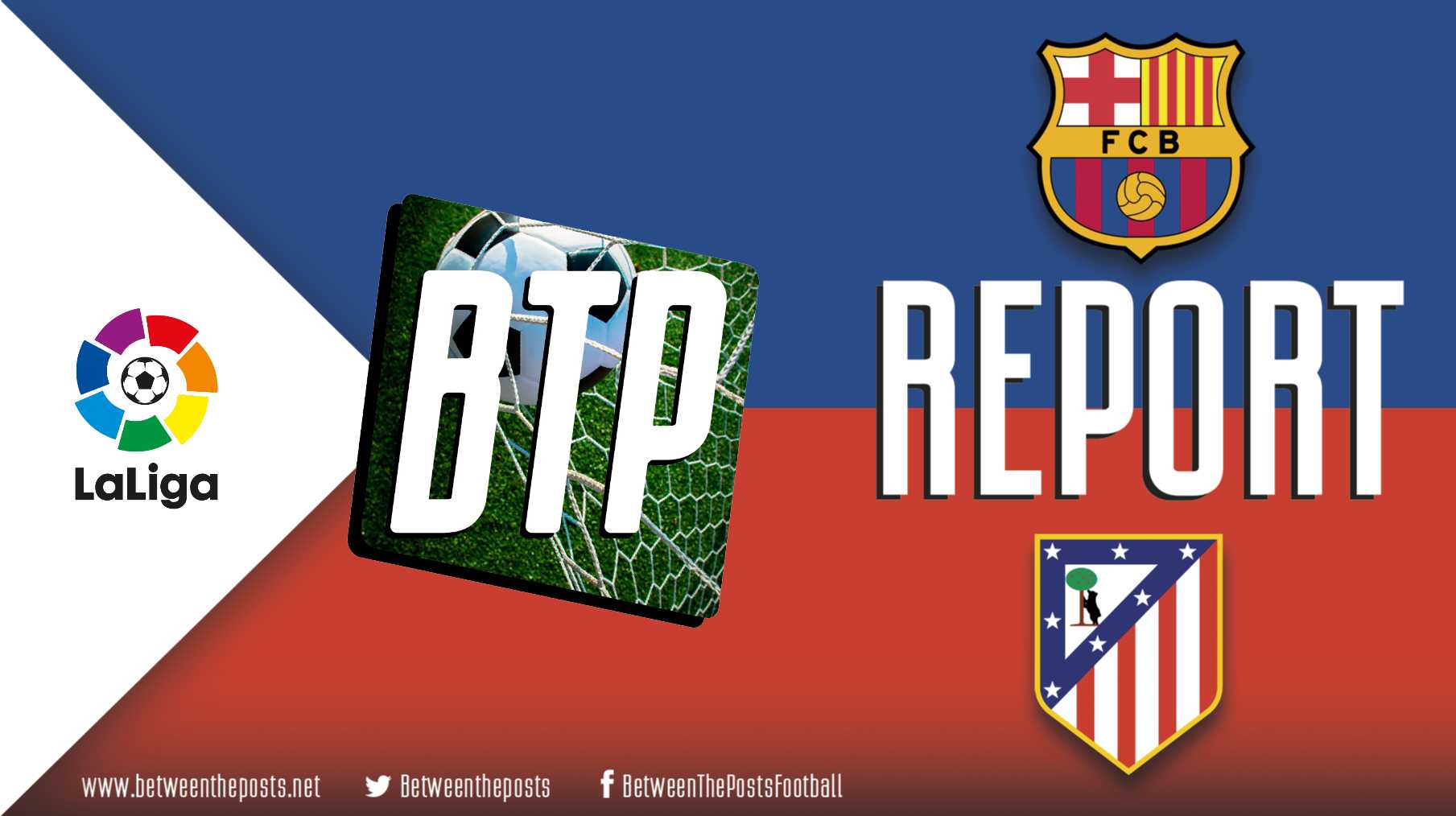