Manchester United dominated possession and defended well against Wolverhampton Wanderers’ main threats, but struggled to create goal-scoring opportunities. Man United controlled the first half, but João Moutinho’s equalizer brought the game back to where United is uncomfortable. Wolves ended up close to stealing a win.

Manchester United reacted from two straight defeats with three away wins in a row, including a winning start in the Champions League against Swiss champions Young Boys (0-3), and looked to be back on track. Wolves arrived at Old Trafford in form managing to collect seven points from their last three games, as they drew 1-1 against Manchester City (H), and notched 1-0 wins against West Ham (A) and Burnley (H).

José Mourinho could not count on Nemanja Matic and Marcus Rashford, who where both serving suspensions. Marcos Rojo (knee) and Ander Herrera (ankle) continued to be sidelined by injuries. In addition, José Mourinho stated that promising Diogo Dalot shall only play when “totally fresh” during his adaptation, so Antonio Valencia returned to the starting eleven. As did Marouane Fellaini, Jesse Lingard and Alexis Sánchez, who were all rested in the Champions League fixture in Bern in midweek. Luke Shaw was picked ahead of Ashley Young, despite playing ninety minutes on Wednesday.

Nuno Espírito Santo had fewer problems, with only winger Ivan Cavaleiro still unavailable, and repeated the lineup that started every game so far this season.

Manchester United started in the usual 4-3-3 with Fellaini in the ‘Makelélé role’ as defensive anchor, with Paul Pogba and Fred ahead of him in midfield, and Lingard on the right wing as a wide playmaker often joining the midfield, Sánchez on the left wing as a more incisive inside forward and Romelu Lukaku up front in his usual target man role. 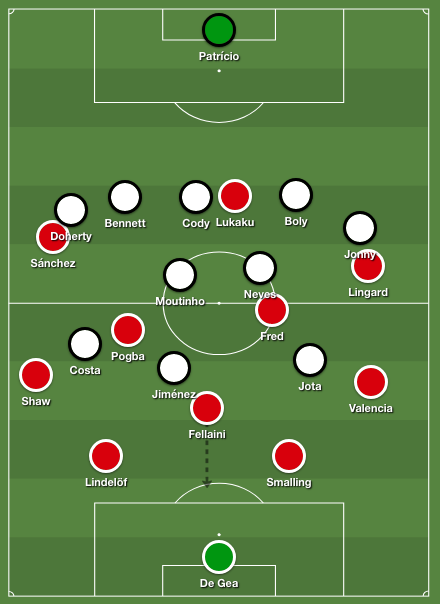 Manchester United’s positioning in attack, while Wolves formed their 5-2-3 / 5-4-1

Wolves started in their usual 3-4-3-in-possession, 5-4-1-in-defense formation. With Conor Coady as the central and most creative player of the back three, Willy Boly and Ryan Bennett on either side of him, Matt Doherty and Jonny Otto as the wing backs, Rúben Neves and João Moutinho forming a fearsomely creative double pivot, Hélder Costa and Diogo Jota as inside forwards and Raúl Jiménez as striker. 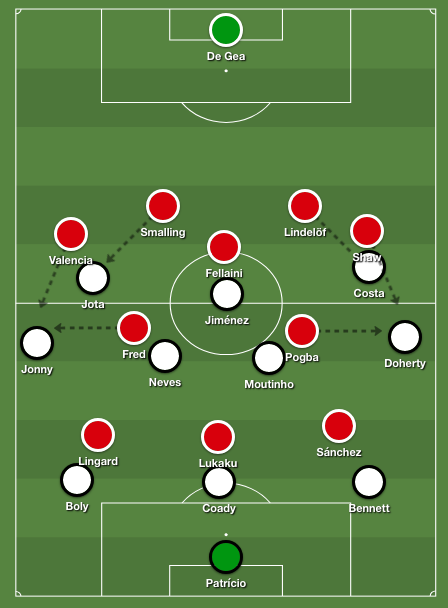 United dominate possession
It was a game where both managers knew exactly what to expect from their opponents and were confident they could stop them, which they mostly did.

Having a natural three-versus-two advantage in the central midfield, United was expected to dominate possession and did just that. With Neves and Moutinho being forced to defend deep by the positioning of Fred, Pogba and the incursions through the middle of Lingard, Fellaini was usually free from pressure. Wolves seemed content to allow the least creative of United’s midfield trio more time on the ball, but the Belgian did on occasion find a line-breaking pass, including a direct connection to Lukaku who could then pass back to either Pogba or Fred to receive the ball while facing the opposing goal.

This did not happen nearly often enough, though, and once in the final third of the pitch, United struggled against the very compact and balanced 5-4-1 shaped defence of the visitors, because Lingard and Sánchez could not find space between the lines. Fullback Valencia’s lack of involvement in attack seemed to be a particular problem. With Lingard cutting inside, Valencia was the one responsible for providing width on the right wing. But at the age of 33, there are signs he might not be up to scratch to play that role for United anymore. Which makes newly signed youngster Diogo Dalot’s inclusion in the first team more urgent than anticipated. 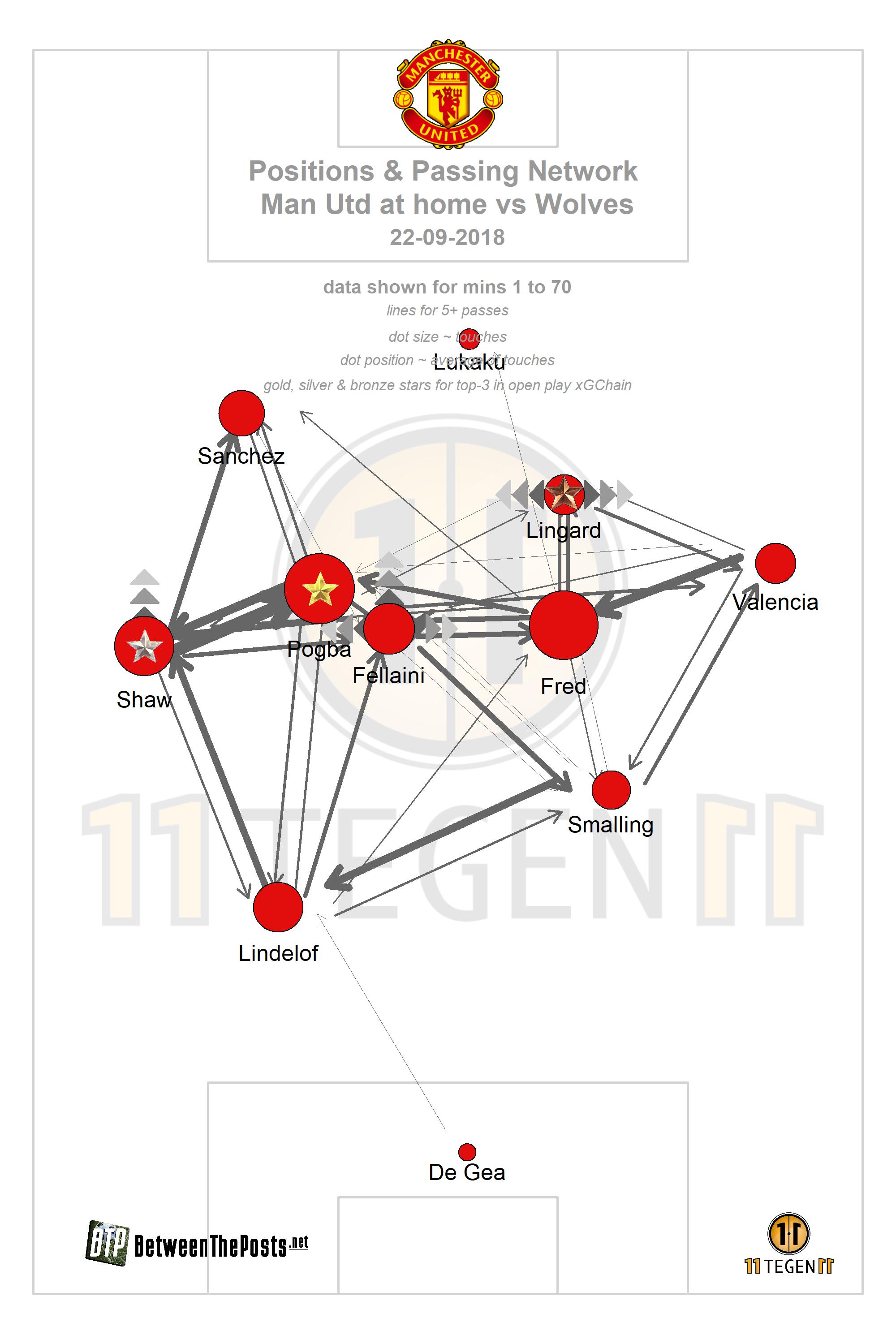 Wolves’ counter-attacking: few yet dangerous
Wolves were not having much fun in the attacking phase either. United prevented them from playing from the back, trying to force the ball to be played to the wing backs, deploying the front three near the centre backs in goal kicks and forcing Rui Patrício to pass wide. As the ball travelled to the wing backs, United’s press was triggered. By the time Jonny or Doherty received the ball, they were being closed down and could only attempt a first time pass towards their side’s inside forward or midfielder who would also be marked tightly by then.

The times Wolves did manage to reach the opposite half, a lot of balls were lost with speculative passes and one-two attempts with low probabilities of success. Striker Jiménez, always energetic off the ball, played particularly uncomposed in possession today.

Wolves’ main plan, though, was to hit quickly on offensive transitions, using their width and their midfielders’ ability to make quick switches of play. Mourinho expected this and United’s full backs never allowed their opponents too much space, but Wolves still managed to create some one-on-one situations against the fullbacks, which created real danger.

This was the case in the seventh minute, when Hélder Costa beat Shaw on the right and found Jiménez in the box. The Mexican received the ball with his back to goal, but managed to turn and take a shot, which David De Gea saved. Wolves came close again from a corner, when center-back Boly, after beating his man-marker Chris Smalling, headed dangerously and forcing De Gea to another save.

United scored the opener slightly against the run of play from a moment of pure class by Pogba. A Sánchez cross was headed clear towards the Frenchman who, just outside the box and with no obvious passing lines in sight, saw Fred’s movement behind Neves and with a brilliant first touch set up the ball perfect for the Brazilian’s shot. With plenty of men in front of him, Fred’s shot went through the head of the needle and into the bottom corner.

Against the run of play it may have been, but once ahead, United could focus on what they do best and see the lead through. The confidence of Wolves seemed hit and United kept dominating possession and controlling the game at will. Their danger in the first half came from set pieces too. For example in the 32nd minute, when a training ground play involving Fellaini and Smalling almost went in. The same routine had yielded a goal in United’s last Premier League outing at Watford. The second dangerous moment was just before the half-time whistle, when Fred took a terrific free kick towards the top corner that Rui Patrício saved brilliantly.

Wolves equalize, Mourinho reacts
The second half continued with Manchester United comfortably controlling the game until the 53rd minute when, fittingly, Wolves also scored in perhaps their worst period of the game.

Pogba, who was immense all game, committed a costly mistake. He received a pass from Fellaini with his back towards goal, tried to turn but was dispossessed by Rúben Neves in the centre circle. After a quick pass forward, Jiménez found Costa who, one-on-one, got the best of Shaw and managed to serve Jiménez once again. Pressured, the Mexican striker passed backwards to Moutinho who, from the edge of the box, curled a beauty into the top corner.

Mourinho’s instant reaction was a familiar one. Fellaini was moved up the field to serve as an extra outlet for a direct ball. Ten minutes later, Mourinho was more ambitious, bringing Mata and Martial on for Sánchez and Fred. With the substitutions came a switch to 4-2-3-1 with Fellaini and Pogba playing deeper, but with freedom to go up, Lingard as the ‘ten’ and the substitutes on the wings.

Without Fred, though, United lost their grip on possession and the game became more open. The two teams traded blows with semi-dangerous shots from outside the box by Jota and Lingard. As the game went on, though, it seemed Wolves were tiring quicker and United started to have the upper hand. Twice, crosses from the left, by Pogba and Shaw, connected with dangerous headers by Lukaku and Fellaini.

With only Andreas Pereira left on the bench as an attacking option, he was the next to come on in the 75th minute, with Lingard being sacrificed. Fellaini was once again moved up as United prepared for fifteen minutes of route one football.

Wolves’ coach Nuno answered by bringing on Adama Traoré – one of the best dribblers in the league – for Costa, hoping to steal a win on the counter. Wolves kept dealing with United’s high balls fairly comfortably and almost hit back with Traoré. Twice, the speedy dribbler was launched on the counter in added time. On the right wing, sent into space by Neves, Traoré dribbled in front of Shaw and hit a low shot towards the bottom corner that De Gea had to save with his foot. In the last minute of added time, Traoré carried the ball through the centre in a three-against-two situation, but opted for the shot and could not hit the target.

Takeaways
Manchester United have come short once again in a game where Mourinho read the opposition well enough to deny their offensive threats and defended competently. United, once again, created too few chances for a team with ambitions of winning the league. It seems all too easy for a compact team in a low or medium defensive block to force United out of ideas rather quickly. Mourinho’s critics will be smelling blood, and his reactions to them will probably make the headlines, but the truth is that it is harder and harder to understand how this United side is not capable of doing much better in the offensive phase.