Old-School Football In The New Age Of Napoli

Luciano Spalletti has a reputation for being the right coach at the wrong time. With an array of club legends all departing in the summer, perhaps a similar fate was awaiting him once again. But excellent summer signings adopting his old-school possession methods, may be the perfect marriage for Napoli to dominate Serie A this season.

Tensions and discontent had surrounded an awkward summer in Naples. Club president Aurelio De Laurentiis had announced that they would no longer sign players who could represent their national team at Africa Cup of Nations, whilst heckles towards Spalletti could be heard during their summer training camp.

With Kalidou Koulibaly, Dries Mertens and Lorenzo Insigne all leaving, Napoli had lost its spine of the last decade; yet they have always found a way to regenerate. When Ezequiel Lavezzi left, Insigne stepped up. When Edinson Cavani was sold, Gonzalo Higuaín and Mertens came in. When Higuaín left for the highest-ever fee seen in Italian football at the time, Napoli scored more Serie A goals than anyone else that season.

It was a squad blessed with incredible technical ability but hadn’t reached the same brilliance that Maurizio Sarri had brought to them. Carlo Ancelotti left on bitter terms and a poor run of results and although Gennaro Gattuso delivered a Coppa Italia trophy, his conservative style didn’t reflect the approach that Neapolitans desire. Spalletti elevated the team to greater heights, with sloppy results in April the only time that caused detachment from the rampant Milan clubs.

After a summer of discontent, they started the season with a bang. Unbeaten and on top, nobody has produced as many shots, nobody has scored as many goals and only AS Roma has a higher Expected Goals count than they do. Spalletti alla Napoli, a traditional dish with fresh ingredients.

Deep to draw the press

In possession, the role of the fullbacks has been football’s biggest evolution in recent years. This is because we have seen them take a lot more central or inverted positions, not just to assert control but for midfielders to push a lot further ahead. Napoli’s fullbacks still take up some interesting positions, but their approach is all about what their midfielders are doing and how they are rotating.

Spalletti’s 4-3-3/4-2-3-1 system has fielded Stanislav Lobotka, André Zambo Anguissa – who signed permanently in the summer – and Piotr Zieliński in all but two of their fixtures so far this season, including the games in the Champions League. When you think of these midfielders, two obvious traits spring to mind: press resistance and excellent dribbling skill. 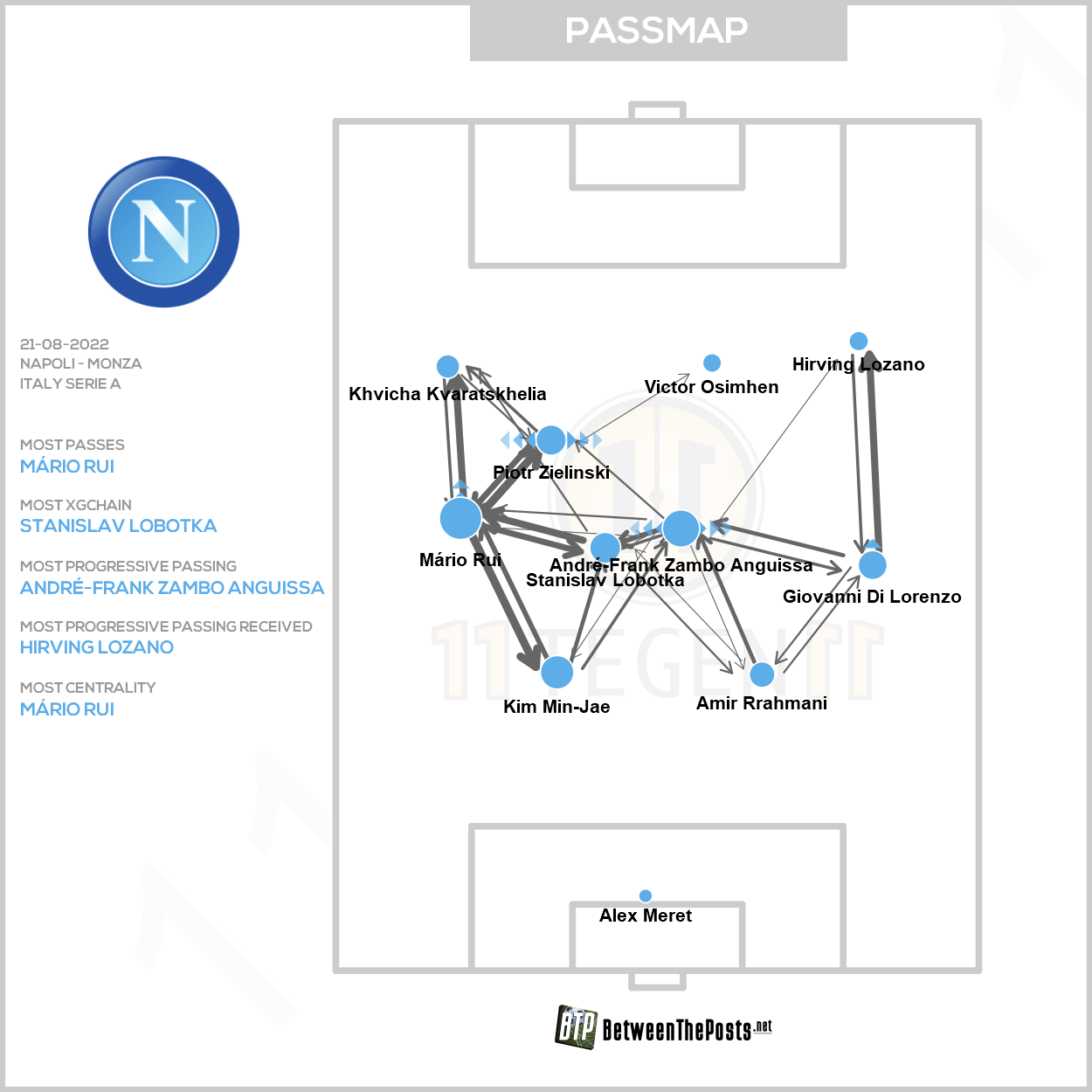 Deep center-backs, conservative full-backs and an adaptable midfield. Napoli is all about attracting the opposition to press them.

When building from the back, Napoli capitalizes on their skillsets, by setting their backline as deep as possible to open space for their midfielders to receive on the turn. Min-jae Kim, who was recruited from Fenerbahçe, and Amir Rrahmani are on the same line as goalkeeper Alex Meret on goal kicks. Mário Rui and Giovanni Di Lorenzo are also in very deep positions as they aim for the opposition to draw forward, to open space behind them.

Napoli often deploys Lobotka as the deepest, but Anguissa can also move into the same line, which can cause a conundrum for man-orientated pressing schemes, as Napoli has an excellent collection of runners that can be isolated with a defender very quickly. Although Spalletti’s team doesn’t have clear defined patterns, the excellent spacing and connectivity between its midfielders make them incredibly difficult to press in these areas. Even Zieliński can drop behind Lobotka, but the positional tweaks and rotations mean that they do not lose balance when they end up in these positions. 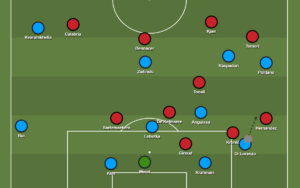 37th minute vs Milan: Napoli’s deep set-up versus the press of Milan. Di Lorenzo was able to find Politano, and with Raspadori separated from Simon Kjær, due to the center-back opting to cover his partners’ space, Raspadori switched possession to Kvaratskhelia.

Teams have been able to suppress Napoli’s midfield on occasions, most notably Fiorentina and Milan who had strong pressing phases in their games by sitting compact centrally before overloading the wider areas as the play developed. But taking the ball off their midfielders has proven to be an impossibility and their fullbacks offer great support by maintaining deep positions. In their rotations, Di Lorenzo or Rui can sit more narrowly on the far side, which can make connections more accessible.

When circulating around a mid-to-low block, both Kim and Rrahmani keep their deeper positions, rather than sitting on the halfway line. If an extra attacker can be drawn out of his position in the block, it can be capitalized.

When passing through teams, the relationships between fullback and winger is very important and the dynamics can shift. On the right, Matteo Politano sticks as close to the sideline as possible when he drops deep. The angle is then open to pass infield on his stronger left foot, whether his target would be an underlapping Di Lorenzo or the striker who comes towards the right side as they exchange passes.

Further up the field, Anguissa adds to the offensive dynamic by taking up a wide-right position, where his dribbling ability can become a great asset in the final third. This often helps the winger or fullback access good crossing locations towards Victor Osimhen, but Anguissa can make the off-the-ball movements in the halfspaces too to create spaces for the ball-carrier. 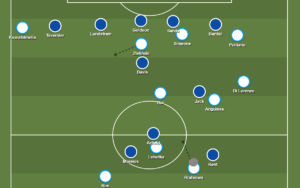 11th minute vs Rangers: Example of adaptations coming from fullbacks. As play funnelled backwards, and Arfield was attached to Lobotka, Rui took up a position in the center, free by Zieliński’s high positioning. As Zieliński moved laterally into space, Rui connected with the Polish midfielder and the fullback made an underlapping run into space behind Lundstram.

In possession on the right, Napoli can inflict further problems by either Rui or Zieliński coming over towards this side, closer to the ball-carrier, to create overloads and connect. This was seen in the game away to Rangers, who were in a 3-5-2 defensive set-up. As their wing-backs were pinned to the defensive line, space was created for Napoli’s fullbacks to become adaptable in their positioning.

Though they are usually in their 4-3-3/4-2-3-1 system, Spalletti’s team can make tweaks to their shape and midfield movements, to create attacks. In the same Rangers game, Napoli had Khvicha Kvaratskhelia and Politano come more towards the ball, with a huge onus on underlapping runs to create space. Zieliński and Anguissa created these movements, but Rui and more noticeably Di Lorenzo could also offer similar moves.

Away to Lazio produced a very different performance, after Sarri’s 4-4-2/4-5-1 system had caused frustration in the first half. Then Napoli started to add the extra man in the defensive line, which would come from Anguissa, Zieliński, or even Di Lorenzo on the right. Not only did this tilt Lazio’s shape more towards one side, but Napoli could create two-versus-one overloads on the far side, with Rui on the outside and Kvaratskhelia inside. As a result, Napoli worked the ball to the player holding the width, with more options back inside to connect. 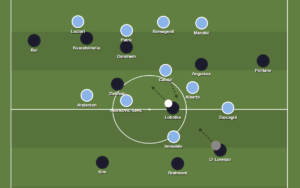 25th minute vs Lazio: (Grey ball, first pass: white ball, second pass) Napoli’s switch to 3-2-5/3-1-5-1 shape was able to change passing angles out the backline and asymmetry enabled two-versus-one overloads to be established on the far side.

The biggest dilemma towards the end of last season was just how Napoli was supposed to replace the ever-present Insigne. Like Arjen Robben, you knew just what Insigne was going to do, cut inside onto the stronger foot. Though their end products were very different, just how the opposition was supposed to deal with their incredibly effective skill sets was another matter altogether.

Little did the general football public know that the answer would come from the Georgian league.  Khvicha Kvaratskhelia has exploded onto the scene and with a distinctly different profile to his predecessor. Whereas Insigne slowed down, Kvaratskhelia has an excellent ability to instantly change the tempo once on the ball.

Zieliński or Rui can take a high position, inside or outside, to accommodate the winger, often providing one-twos or enabling Kvaratskhelia to receive on the turn and drive the ball towards the defenders. He is a much more aggressive option, an excellent dribbler and able to utilize either foot to chop and change away from the opposition fullbacks. Kvaradona is set to continue the great trend of left-sided attackers at Napoli. 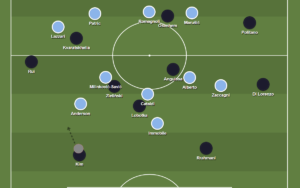 35th minute vs Lazio: Buildup to Kvaratskhelia’s shot hitting the post. Man-orientation from Lazio’s midfield created a lot of space in front of their center-backs. Napoli connected by Rui’s pass back inside for Kvaratskhelia to take the ball to the defenders.

Wingers like Politano or Hirving Lozano are a little more connective, but the young Georgian is perfectly equipped and a natural fit in a Napoli system that is all about drawing and exploiting space. Once behind the midfield line, this is where attacks can turn from settled possession into semi-transitional attacks. Kvaratskhelia assists this by constantly driving the ball in the halfspace and his influence in games has already shown his great importance.

Perhaps there isn’t a more frustrating Napoli signing than Victor Osimhen, simply through the sheer amount of injuries the Nigerian striker has suffered. In Spalletti’s system, Osimhen has no deep playmaking responsibilities and his central presence can lead to Napoli producing a lot more direct passes into his path.

His weighted touches are the perfect asset to speed Napoli up, rather than slow them down. These long balls aren’t entirely coming from the middle of the pitch, and when Osimhen is asked to connect down the channels, he is perfectly capable of building the transitions on his own. Once Napoli gets into good crossing locations, there isn’t anyone in Serie A with a more powerful header or shot than the striker.

This piece in the offensive arsenal can be utilized perfectly in Napoli’s extremely deep passing set-up. Look no further than their biggest result of the season so far, when they smashed Liverpool at home in the Champions League.

Osimhen was continuously relied upon to make vertical runs around the Liverpool center-backs, whilst Napoli’s wingers, Kvaratskhelia and Lozano, were able to create overloads by coordinating their runs on the transition. It was a performance that perfectly pictured all the great things about Napoli in this period: their deep circulation drew pressure with routes out, they found multiple ways to break through the last line and got their two aggressors, Kvaratskhelia and Osimhen, in golden positions continuously.

Is this a team that cares more about retaining the ball or rampantly building the pace once space has occurred? It’s the question you have to ask when you label a team ‘possession-based.’ Napoli may have made more passes than anyone in Serie A, but their mechanisms forward highlight a team that is incredibly dangerous when they build the tempo.

Napoli is a team that is traditional in its passing style but is blessed with the technical and tactical ability that can make them very adaptable on the pitch. Their midfield has a huge influence in all three thirds of the field, whilst taking up flexible positions in the process, and has established very important relationships between fullbacks and wingers. This isn’t a team with predetermined patterns, but with the connectivity, width and interplay that makes Napoli a unique collective in the modern game.