After conceding from a set piece early on in the match, Internacional were forced to chase the game for over seventy minutes. For a host of reasons, they could not create any chances against a resilient and efficiently organized Palmeiras, meaning they have started this season’s Brasileiro with two losses from three matches.

In Brazil, they do not like to start the season nice and easy. The top domestic league Serie A kicked off last weekend. Since then, a midweek round of fixtures was in store for all clubs, meaning this was already the third fixture of a season that has only begun one week ago.

World Cup winning manager Luiz Felipe Scolari set Palmeiras up in their nominal 4-2-3-1 formation. Just in front of the defense, the double pivot 4-2-3-1 is one of the most frequently occurring formations in football. The two most defensive midfielders are called a ‘double pivot’. is the fulcrum of the team, as it consists of captain Bruno Henrique and former international Felipe Melo. The attacking trio behind striker Deyverson was formed by Dudu, Gustavo Scarpa and Zé Rafael.

Internacional acted in a 4-3-3 formation, wherein Rodrigo Lindoso acted as the lone pivot, supported by advanced midfielders Patrick and Edenilson. The attacking trio was entirely made up out of non-Brazilians, as the young Argentinean winger Martín Sarrafiore and Uruguayan Nicolás López flanked good old Peruvian José Paolo Guerrero, who after a long spell in Europe is still plying his trade in Brazil.

Whenever Palmeiras had the ball, their main way of building up was either through the flanks – fullbacks passing to wingers – or through a vertical pass into the attacking trio or striker Deyverson. The double pivot was rarely used when building up, and because of this more direct approach, Internacional won the possession battle, averaging over 62 percent in the entire first half.

Internacional were a lot less vertical and direct in their approach, instead preferring a slower buildup and attempting to play through the thirds. The wingers, most notably Sarrafiore, attempted to come inside and overload, When one team has more players in a certain area or zone than the other team. Palmeiras midfield, while Edenilson and Patrick rotated in and out of midfield. 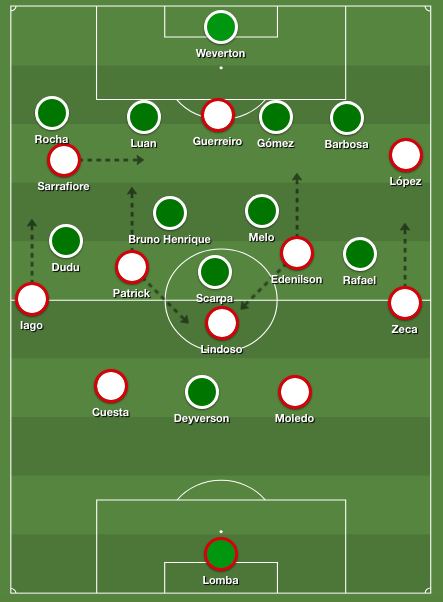 Despite seeing less of the ball, Palmeiras did create some early chances. In the fourth minute, a corner kick aimed towards the first post offered a free header for Deyverson, the striker. He hit the bar with a neat backwards header, and the rebound was cleared by Internacional. Two minutes later, a deep throw-in by Palmeiras’ right back Rocha left Dudu open in the penalty area, but his powerless header went wide.

These early set pieces scares should have probably warned Internacional, but they did not. In the fourteenth minute, another first post corner kick – now from the other side – was headed in by Deyverson. Internacional used a mix of zonal and man-marking to defend set pieces, but to very little effect as multiple Palmeiras players were left free at various set piece routines. 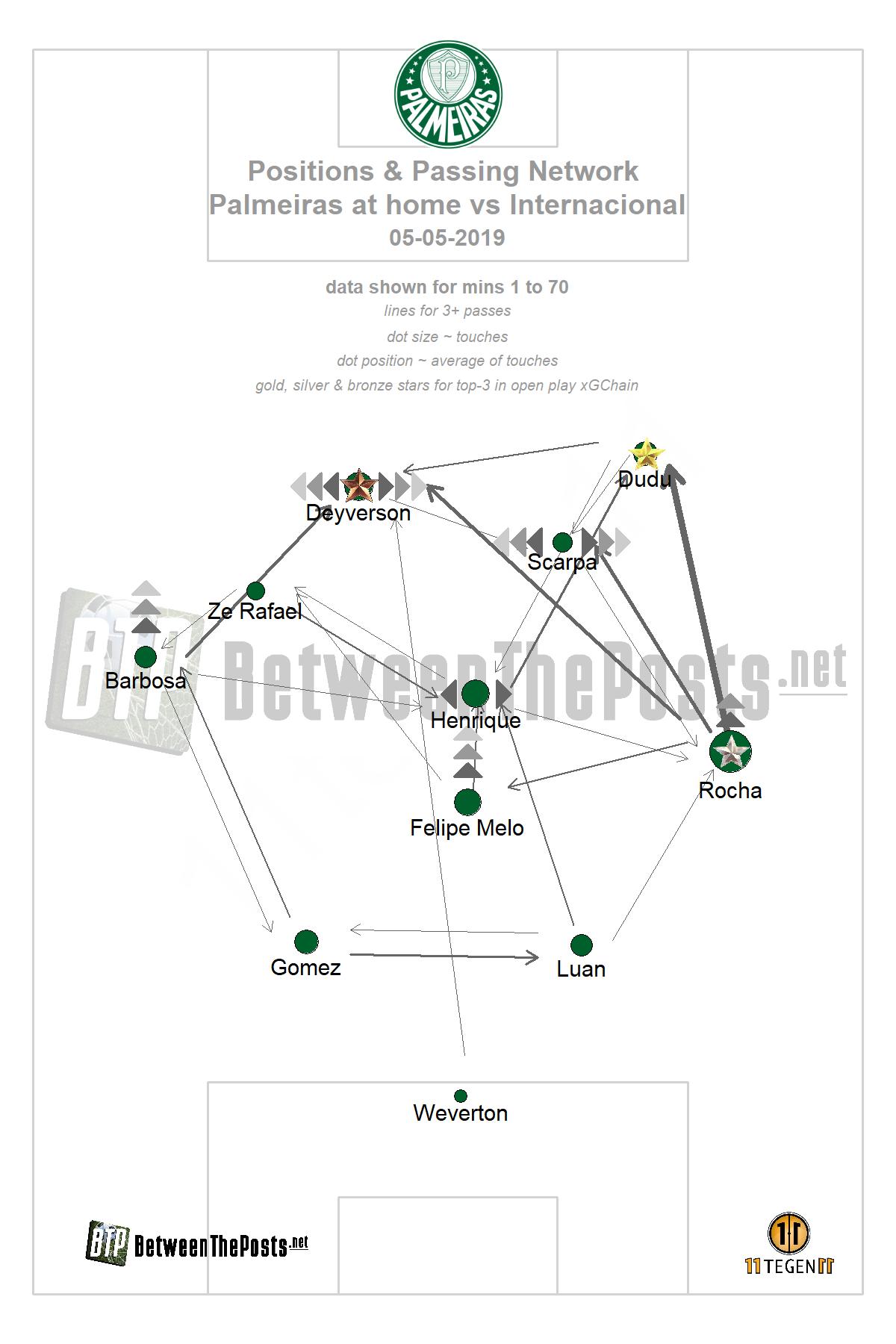 Right back Rocha was a crucial figure for Palmeiras’ ball progression.

The 4-2-3-1 formation used by Scolari very smoothly transitioned into a 4-4-1-1 shape, with two narrow banks of four and Scarpa shortly behind Deyverson. Scolari’s teams usually have a very good defensive organization. Yes, we know the 1-7 against Germany happened when he was Brazil’s manager. That was more of an outlier in Scolari’s career than a recurring trend, however, and Palmeiras are no such exception. It is also worth noting that the wingers defend with discipline and an overall willingness that can be rare in Brazilian football.

It has been mentioned earlier that Internacional played with a rotating midfield, as either Patrick or Edenilson offered for the ball next to lone number six Lindoso. As a result, sometimes no less than seven outfield players were positioned outside of the defensive block put up by Palmeiras.

Because of the slow tempo and total lack of surprise, the match went into half-time 1-0, as after going up, Palmeiras created very little for themselves as well. 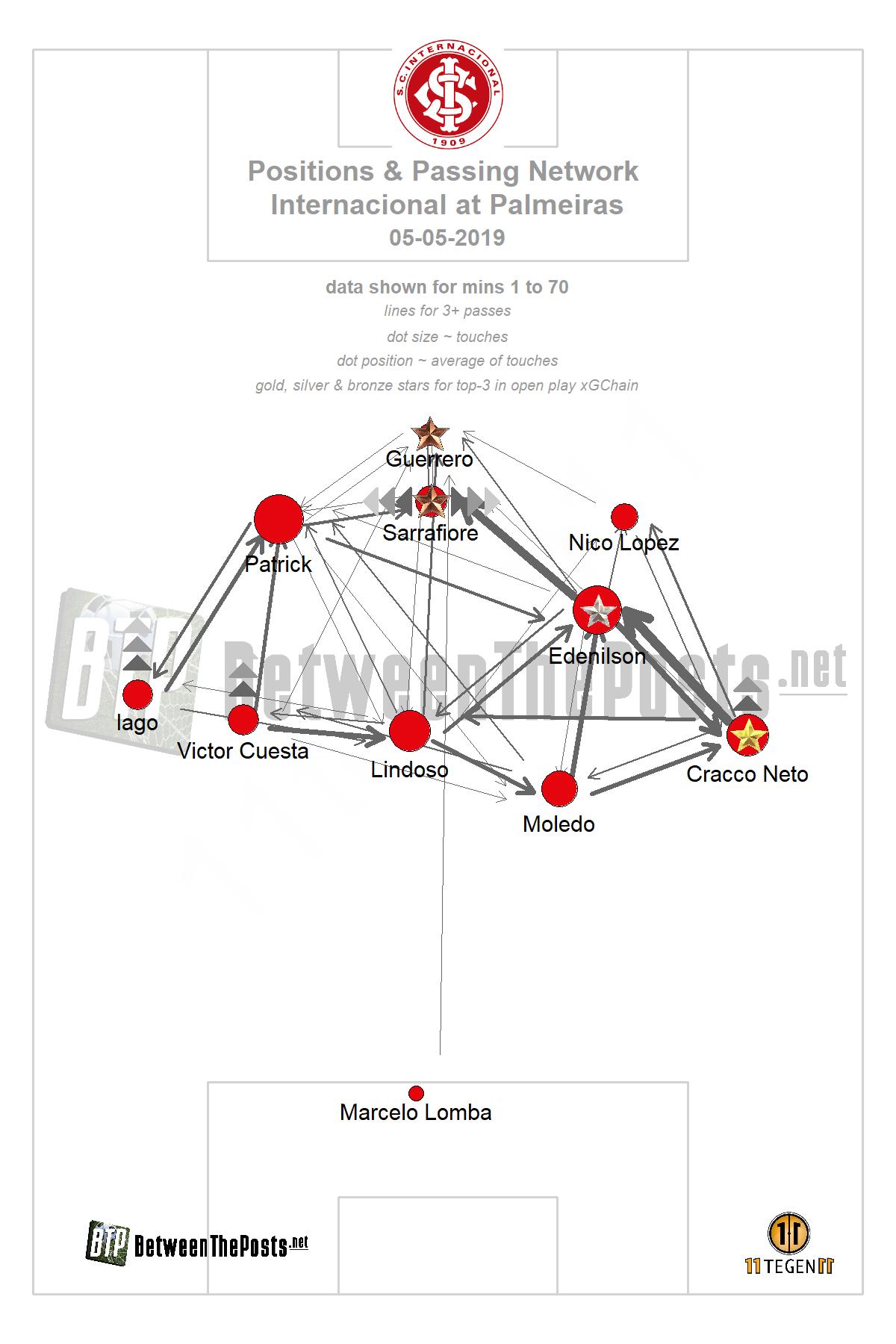 Internacional had Lindoso drop deep in possession, and fell into the trap of playing mostly outside of Palmeiras’ defensive block.

Internacional chase the game without any urgency

Internacional manager Odair brought on Guilherme Parede for winger López at half time. It is easy to say López played an anonymous game, but when the passing is more horizontal than vertical, wingers often get the ball very far away from goal against two defenders, without any tempo in the attack whatsoever. Good luck with that.

What López could have done however, and all of his attacking partners as well, was go in behind the Palmeiras defense a lot more. Because there was a total lack of runs from the attackers, Palmeiras had an easy time defending.

After another fifteen minutes of predictable football, Internacional switched formation, when 38 year-old Andrés D’Alessandro entered the pitch for his compatriot Sarrafiore. The little dribbler – who is still quicker than most defenders, even at his age – went on to play as the number ten in a 4-2-3-1 formation, meaning Parede was shifted over to the right and Patrick acted as left winger from then on. 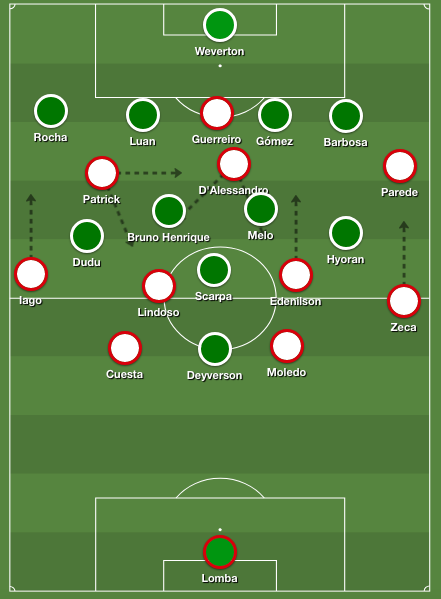 Patrick is a very competent midfielder who was great ball-retention skills and physical ability. But he is not a winger that will take on a right back and deliver a final pass into the penalty area. Because Internacional’s left back Iago played a very bad game offensively, their left side was very dysfunctional all game long.

One minute after Internacional’s switch of formation, in the sixtieth minute, Palmeiras could have gone two up, after a rare counterattack that was finished with a header by captain Bruno Henrique. He headed the ball in the arms of the goalkeeper. In the entire second half, Palmeiras had some semi-counterattacks that did not offer any actual goalmouth action. They never established prolonged possession, meaning this game was almost entirely played on Palmeiras half.

Without any actual defensive problems, that is. The last thirty minutes, this game mostly revolved around veteran D’Alessandro collecting the ball outside of Palmeiras’ defensive block and trying to force something out of the blue. It may be because of Internacional’s heavy schedule, but it felt like they approached this game with an overall lack of urgency, as the tempo was not raised, players still took too many touches and there was still no player providing depth.

In the 88th minute, substitute Hyoran should have finished the game, as he collected a rebound, after Deyverson missed one-versus-one with the goalkeeper. Hyoran however was not able to put the ball between the posts, meaning we got to see another two minutes plus extra time of stale attacking by Internacional, before the final whistle.

All in all, Internacional took thirteen shots, none of those being clear-cut chances or well-rounded attacks. The most poignant statistic to point out their offensive woes is that Guerreiro, the striker, took only one shot all afternoon long, and it came from a set piece. 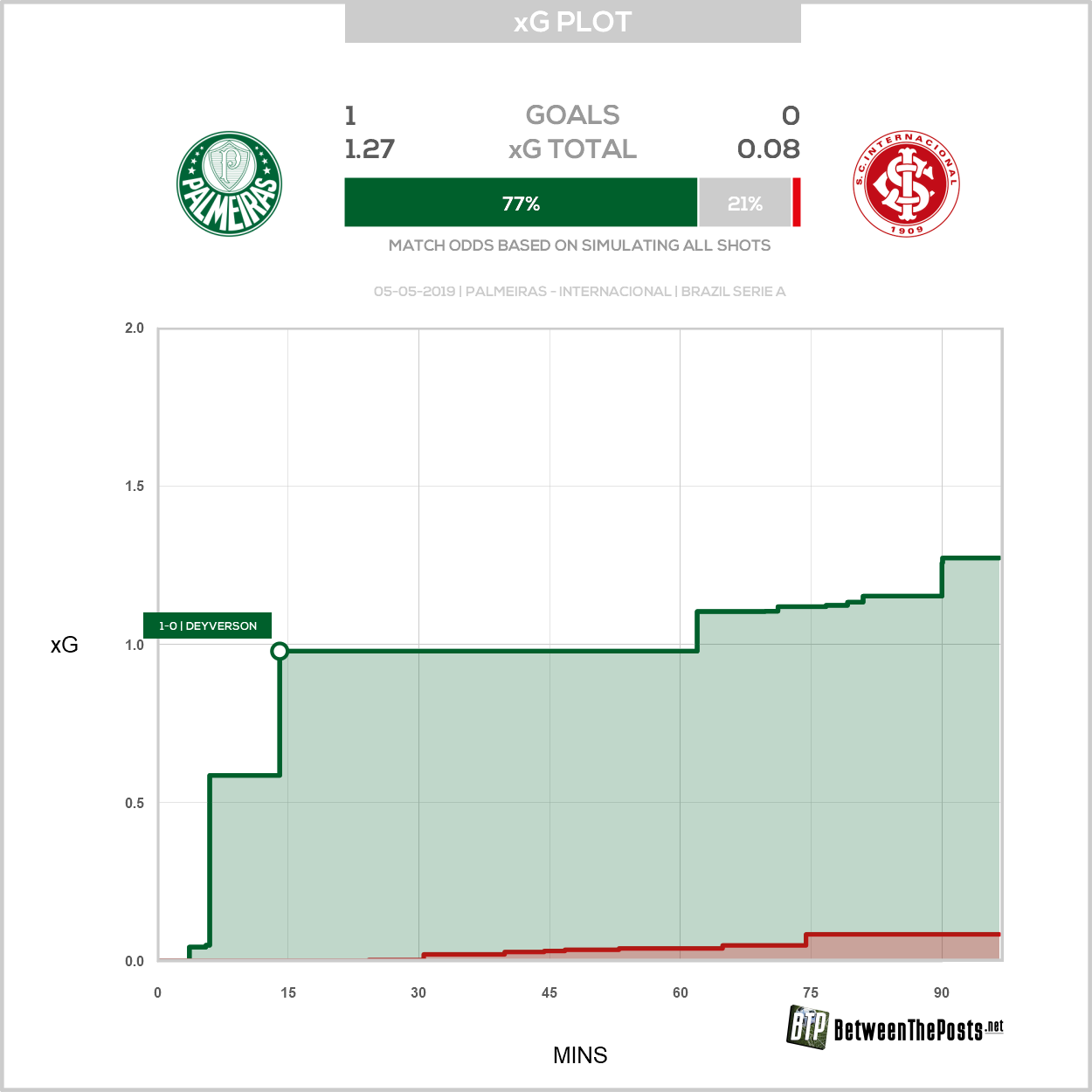 Internacional are tipped as an outsider for the title, but they will come nowhere near the championship if their attacking play does not offer more depth in behind and variety. Manager Odair has to add another layer to their buildup and overall offensive game if Internacional are to get anything out of their season.

Palmeiras will be one of those Scolari teams that give up little goals but also have a hard time on offense themselves. They do have some genuine talent in Deyverson and Dudu however, meaning they will probably be fine and very able to compete for the top spots.

Both teams have to play a Copa Libertadores match on Tuesday night, before playing in the weekend again. South American football: definitely not for the light-hearted…