In the French Classique, the first half was enough to leave Marseille for dead. The abundance of Parisian offensive talent punished André Villas-Boas’ risky tactical approach with four goals before half-time. After a much calmer second half, this also turned out to be the final score.

Despite the obvious budget difference between both clubs, the rivalry lives on and PSG against Marseille remains a very exciting Ligue 1 fixture. Marseille have played second fiddle in recent years and are still chasing a long awaited victory against the Parisians, as the last win came in 2011.

After a deserved success in the Champions League against Club Brugge, PSG kept the same 4-3-3 system in place and started the game with Marquinhos in midfield, along with Marco Verratti and Ander Herrera replacing Gueye who was injured. Without Neymar (injured) and Cavani (unfit to start), the front three was composed of Kylian Mbappé, Mauro Icardi and Ángel di María.

In seventh place in a tightly packed league table before this game – only a four point difference from the second to the twelfth place! – Marseille came to the Parc des Princes in a 4-3-3 system as well. André Villas-Boas chose to play his most technical players available with Maxime Lopez, Valentin Rongier, Dimitri Payet (back from suspension), Dario Benedetto and Valère Germain. Morgane Sanson started on the bench for the first time this season. A starting eleven that clearly suggested some ambitions on the ball from the Portuguese manager.

PSG win the kick-off battle .. and the pressing battle

The beginning of the game was wild.

Both teams started with a very high tempo, and the ball quickly went from one end of the pitch to the other, leading to very early chances. Di María after one minute, Benedetto after two minutes, and then Germain missed the target by a few inches in the tenth minute. After this miss, the tempo slowed down and PSG scored on their first actually thought-out action, starting to expose Marseille’s weaknesses of the day.

Di María, from his right winger position, crossed the ball to Icardi who managed to be free despite being outnumbered four-against-one inside the box. The Argentinian striker scored the rebound from his own header. Ten minutes into the game and Marseille already had the difficult challenge of chasing the game.

PSG started the game with a superior possession and held a 60% possession dominance until the end of the game. Despite the first goal, Marseille probably applied their game plan of the day, which was to hold a medium-high block A medium block refers to a team that retreats in their own half out of possession, generally only disrupting their opponents some way into their own half. A high block refers to a team that regularly leaves their own half out of possession, to disrupt their opponents far into the attacking half. A medium-high block is well… in between these two variants. in a 4-5-1 shape and be able to regularly press PSG high.

Villas-Boas probably noticed during the game preparation that pressing PSG high requires a high level of coordination and intensity. It was indeed the strategy chosen by Nice and Club Brugge, the last two opponents PSG faced (and slammed). Where Nice’s man-oriented approach got torn apart quickly, Club Brugge actually showed that pressing with a more coordinated collective could frustrate PSG for some time. The risk obviously being to be punished by PSG’s elite forwards anyway if you dare leaving them too much space. 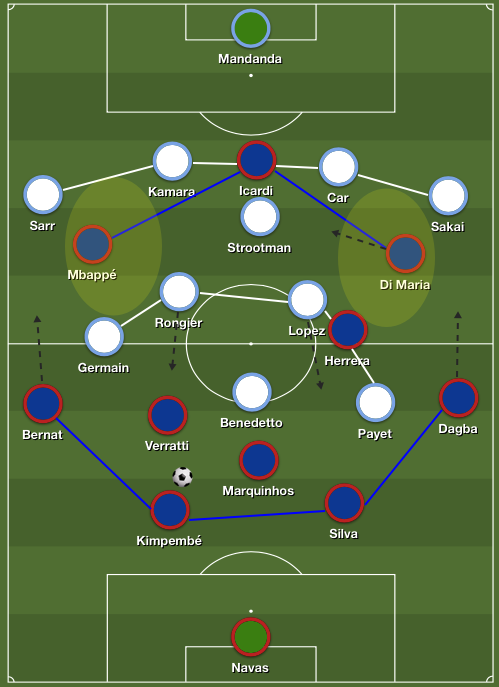 PSG’s 4-3-3 system in the buildup against Marseille’s 4-5-1 shape defensively. The lack of aggressiveness and coordination, along with central midfielders stepping out, offered PSG too much room to manoeuvre.

Marseille’s high pressure was nothing resembling what Nice or Club Brugge had tried to do. It was more of a classic 4-5-1 approach with central midfielders likely to step out on Verratti or Marquinhos. Marseille would press, but it was too shy and uncoordinated to put PSG in trouble at the moment of building from the back.

Even worse, the lack of pressing associated with the risky positioning of the block offered PSG a lot of space between the lines or behind the defensive lines. For example, it was very easy for PSG to find Mbappé or Di Maria in the halfspaces If you divide the field in five vertical lanes, the halfspaces are the lanes that are not on the wing and not in the center. Because there is no touchline like on the wing, players have the freedom to go everywhere. But this zone often is not as well-defended as the very center. This makes it a very valuable offensive zone to play in and a lot of chances are created by passes or dribbles from the halfspace. as those zones would be left unprotected by Rongier or Lopez out of position. On top of this, Strootman was being static and unable to compensate defensively.

All of this did not seem to really bother Villas-Boas, who has a history of asking his teams to maintain a high defensive line – without perfect pressing – at any cost.

In this tactical context, we could see a flexible and free-flowing animation from PSG with some switches of positions – Di Maria and Mbappé, Verratti and Herrera – where Tuchel usually asks his players to remain pretty positional on the field.

As a result, the exploitable space would indeed be exploited. PSG tried to pinch the ball behind the exposed back four, who had to sprint back thirty meters every time their opponents found an interesting pass. Di Maria had a good chance in minute 19, Icardi in minute 29, and the third goal Mbappé scored in minute 32 resulted from a chipped ball bypassing the defense from Verratti to Di Maria. 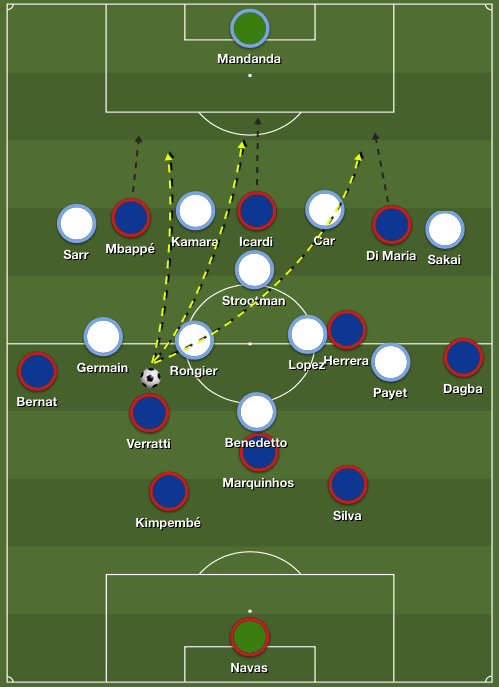 Opportunities for Verratti to shine with his long-range passing into space.

Marseille were in trouble when they hesitated to press high, but also when they tried some high pressing movements. When everyone stepped higher, PSG showed some impressive composure on the ball to bypass pressure and keep the passing flow untouched.

In the 25th minute, PSG moved the ball across the whole field under pressure, ending with a chipped ball from Verratti to Icardi, who scored a header unmarked once again. It is worth mentioning that this very action started with Kimpembé Ronaldo-chopping Benedetto as the last defender, which speaks volumes about the technical level the team can reach.

PSG’s masterclass on the ball reached its highest point in the fortieth minute with Mbappé’s second goal. The action started with Navas perfectly controlling a long ball (!) from Herrera before playing a rondo under pressure with his center-backs. With the first wave of pressure gone, the Parisians then played more vertically until Di Maria made an exquisite pass to Mbappé to offer him a one-against-one with the keeper. Of course the young World Champion did not miss.

Technically Marseille were too poor to respond and they were not really dangerous after Germain’s chance and ended up without an attempt on target in the first half. Moreover, they even lost the ball in dangerous areas at times. Without some great saves by Mandanda, the scoreline could have been higher than the actual 4-0 score at half-time.

PSG slow down and control their lead

Coming back from the locker room, PSG had clearly changed compared to the first half. They did not show the same intensity and Marseille took advantage of that to spend some more time on the ball during the first ten minutes. The Parisians were also more sensitive to high pressure as we could see how the lack of effort and even concentration had an impact on the technical level of the team. However, Marseille would not create any clear chances during that period.

After an hour of play, Paredes came in for Dagba, switching Marquinhos to the right back position. This is also the moment where PSG froze possession again with a fresh technical element in midfield. Tuchel’s side was less vertical and rarely attacked in the second half. Two out of the three shots on target produced by PSG came through long distance free kicks.

Tuchel showed clear signs of unhappiness about the lack of danger created by his team in the second half. “When something does not seem good, I tell it,” he said after the game. Nevertheless, the score was sealed and nothing special would happen anymore, to the point the referee whistled the end of the game without any extra time despite six substitutions in the second half.

The Parisians celebrate a fantastic victory in the #Classique #PSGOM

Boasting four victories in a row with four or more goals scored for the first time since Tuchel has taken over the team, PSG continue their current great dynamic. Despite all the injuries and the international break, the French capital club has found a point of balance by maintaining the 4-3-3 system game-in game-out, with several nuances according to the players starting in each position.

There was probably not much Marseille could do to actually win against this PSG side, but still Villas-Boas’ obsession with the high defensive line – without proper pressing – against an opposition that excels at playing vertical and dangerous passes into space was dubious. After all, Mbappé had scored a hat-trick in half an hour playing against an exposed defense the game before.