Poland – Italy: Italy Steals Victory At The Death With A Clever Set-Piece Routine (0-1)

Poland tested Italy’s build-up with an interesting starting formation, determined to block off access to the center. Italy soon found a way around this, upon which Poland responded with an efficient formation change. This evened out the game but wasn’t enough to prevent Italy from snatching victory with an injury time winner.

With Portugal leading Group 3 of League A in the UEFA Nations League by a healthy four points, Italy manager Roberto Mancini picked a strong lineup to travel to the Silesian Stadium in Poland. He fielded a 4-3-3 formation with a fluid front line of Lorenzo Insigne, Federico Bernardeschi, and Federico Chiesa, spearheading a midfield trio of Marco Verratti, Jorginho, and Nicolò Barella.

Poland manager Jerzy Brzęczek took the match just as seriously as Mancini and went with an intriguing 4-4-2 diamond shape, which played out as a crucial element in this match. Robert Lewandowski and Arkadiusz Milik formed the strike partnership ahead of Piotr Zieliński, the ‘number 10’ who sat in front of a midfield of Karol Linetty, Jacek Góralski, and Damian Szymański.

Italy’s high press troubles Poland throughout the game
Roberto Mancini sought to control the game right from the start and have his team dominate possession through the use of an aggressive man-to-man high press. 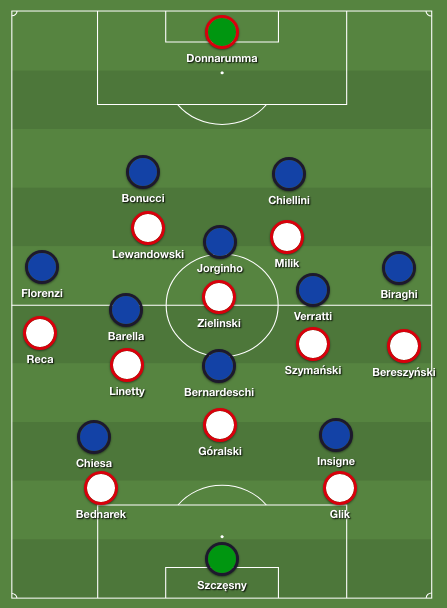 This approach allowed Italy to stay in their natural 4-3-3 shape, as Chiesa, Bernardeschi, and Insigne didn’t have to move far from their offensive positions to access Polish center backs Bednarek and Glik and defensive midfielder Góralski. Behind Italy’s front three were midfielders Barella, Jorginho and Verratti, who man-marked their midfield options, and Florenzi and Biraghi, who stuck close to Poland’s fullbacks. Bonucci and Chiellini completed the full man-marking system by breathing down the necks of Lewandowski and Milik.

The described system was simple but effective – goalkeeper Szczęsny was forced into no less than 34 long passes. One can argue that Poland preferred to go direct regardless of Italy’s strategy in order to take advantage of Lewandowski and Milik’s strengths, but the home side’s lack of comfort became apparent when they opted to play on the ground. Central defenders Bereszyński and Reca completed only sixty and fifty percent of their passes respectively and every midfielder besides Zieliński failed to attain a mark greater than eighty percent.

Italy’s high pressing system created turnovers either side of half-time, with high-quality chances for Insigne and Jorginho in the first half.

Poland try to block off the center
Teams that attack in a 4-4-2 diamond formation have the choice which defensive option to take when transitioning back to defense. Either they change to a flat 4-4-2 on defense to cover the flanks, or they stay in their diamond shape and are more compact in the center of the pitch.

Brzęczek chose to do the latter against Italy by setting Poland up in a 4-3-1-2 defensive block near the halfway line. 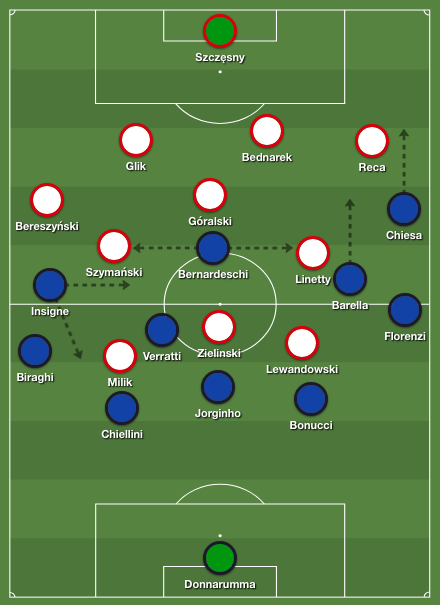 Poland’s 4-3-1-2 formation when Italy had possession.

Although there was some pressing from Lewandowski and Milik, it is difficult to discern whether this was part of a concerted plan. The two didn’t seem to be reacting to specific triggers A pressing trigger is a specific pass or movement by the opponent that draws out a coordinated team press. and Zieliński’s involvement in the pressing actions felt random. As a result, it appeared like Lewandowski and Milik were simply pressing of their own volition, which is probably why their efforts died down significantly as the match wore on.

Regardless of whether those moments were intended or not, it is clear that Brzęczek instructed his two strikers to generally sit in line with Zieliński to block off passes to the center, where Italy’s passing powerhouses Verratti and Jorginho were stationed. Though Verratti often dropped near Jorginho to create a secure base for ball retention, this didn’t allow Italy to do more than pass to the wings.

Initially, these passes were mainly aimed at the left thanks to Verratti’s positioning as a left central midfielder and Insigne’s willingness to drop deep from that side of the pitch. The objective was probably to engage in short passing combinations between Insigne, Verratti, Jorginho, and Biraghi, but this strategy played straight into Poland’s hands.

Brzęczek’s midfielders and strikers moved in unison to trap Italy’s possession play on the left-wing, creating a congested atmosphere that was only made worse by Insigne dropping deep. Smaller passing distances can sometimes help to improve passing accuracy and ball progression, but Insigne’s movements prompted Poland’s left-sided defensive structure to step up the field and effectively tighten the operating space.

Italy’s team was filled with thinkers though, and the failure to progress the ball on their left flank prompted them to try more attacks down the right, where they found much more joy. This was due to Barella’s unorthodox central midfield role and right-winger Chiesa’s direct nature. Both players chose to make runs into the channel between Poland’s left center back and left fullback, which stretched Poland’s defense and created space for Florenzi to move the ball forward. This pattern occurred midway through the first half, when Barella’s run in behind helped advance possession to the final third, before Chiesa used his impressive one-versus-one ability to create a shot for Bernardeschi.

If Florenzi was able to get forward to join Barella and Chiesa quick enough, his overloads proved to be a real threat. This proved to be the case in the 36th minute, when Florenzi drove forward and floated in a cross that Chiellini nearly headed into the back of the net.

This moment roughly coincided with Insigne’s decision to start roaming to the right, which enhanced the opportunities for progressions down that flank. And when Italy finally melded all of this with swift side-to-side ball movements, they created an excellent chance for Florenzi in the 44th minute off of a beautiful Insigne backheel. 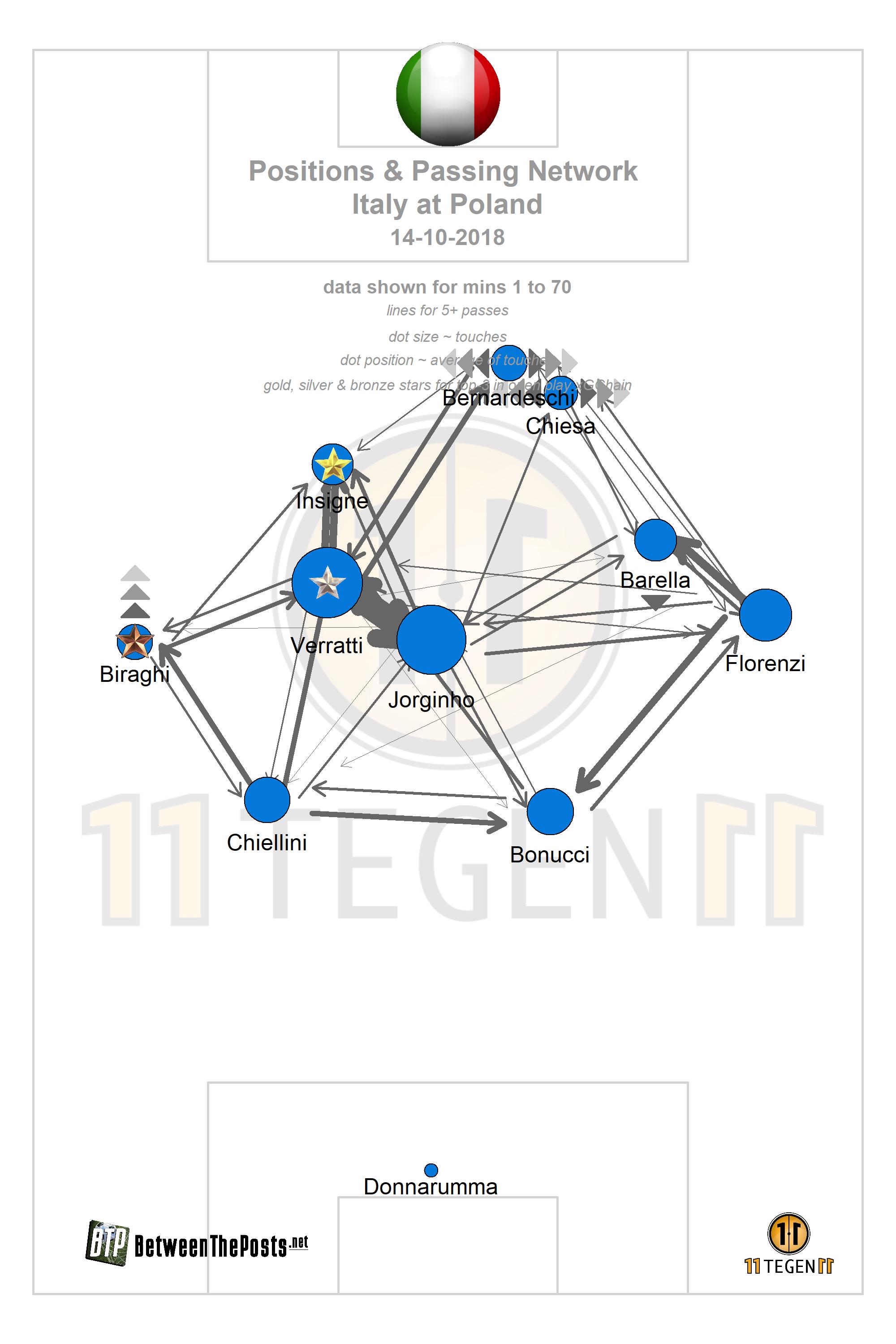 Poland’s half-time solution
Concerned with the way Italy’s lateral switches of play, Barella and Chiesa’s runs, and Insigne’s movement had destabilized his side, Brzęczek changed things to a flat 4-4-2 formation with the introductions of wide players Kamil Grosicki and Jakub Blaszczykowski for central midfielders Szymański and Linetty.

For whatever reason, Italy reacted to this by pushing Chiesa to the left wing, bringing Insigne to the center, and shifting Bernardeschi out wide. Consequently, Italy’s attacks were heavily focused on the left-wing as Insigne drifted over to that flank and looked to link-up with Verratti to help play get to the final third.

However, this wasn’t nearly as effective as what they had produced in the first half, something that was probably down to Poland’s tactical change. The presence of Grosicki and Blaszczykowski in wide areas made it harder for Italy to manufacture space through horizontal passing movements. Additionally, moving Chiesa to the left-side of the pitch ended the Chiesa-Barella overload down the right channel, making it easier for Poland to defend the spaces between their fullbacks and center backs.

Thus, Italy only managed three significant shots – only two of which came in open play – after the half-time break, with one coming in the 70th minute when Bernardeschi blew a great headed chance off of a brilliant Chiesa cross. The other opportunity came in the 59th minute from a standard cross from the right-wing. The third arrived in injury time off of a clever set-piece routine. Substitute Kevin Lasagna charged towards the near post and flicked the corner into the path of Biraghi, who poked home the winner.

Before that moment, Poland had had some joy or their own in the second half where they managed to create a handful of fast break chances. It’s difficult to discern whether this was down to their formation change or Italy’s own carelessness. The latter certainly contributed to dangerous situations repeatedly. A poor Insigne pass in the 73rd minute created a one-versus-one situation and a good rebound chance that Grosicki and Milik blew respectively.

Poland’s best offensive spell came in the 58th minute, when the width Grosicki provided down the right allowed Zieliński to play a diagonal ball into the box. Grosicki controlled the ball well and forced Donnarumma into a solid save that nearly gave Milik a headed opportunity on the ricochet. 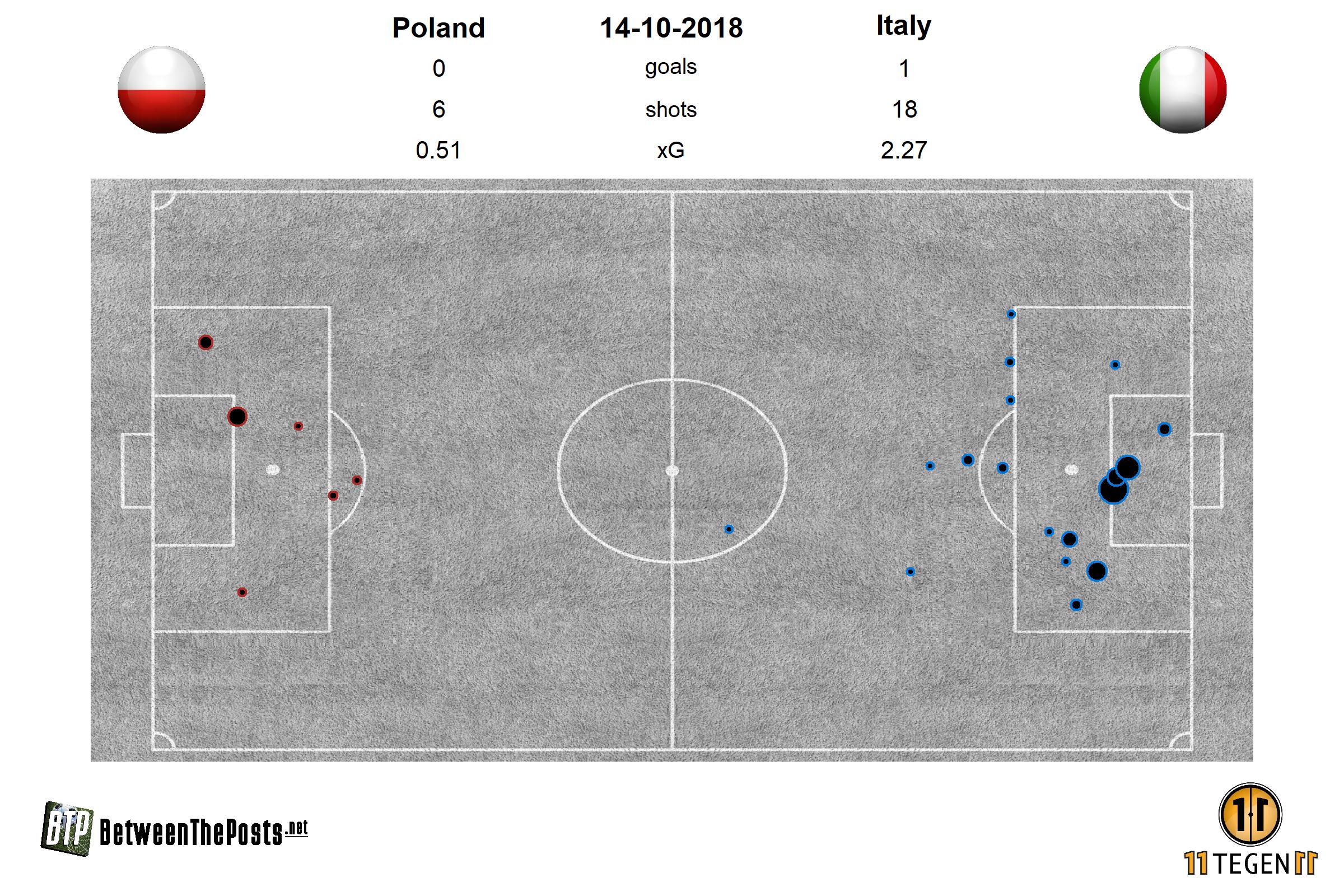 Takeaways
Italy were the much better side and deserved to win. Their effective high press demonstrates their impressive level of tactical discipline and their ability to change strategies in possession on the fly shows the creative intelligence that exists within this Mancini team.

Youngster Federico Chiesa deserves a line all to himself. He was an omnipresent threat versus Poland, creating three key passes and all kinds of danger with his direct runs on and off the ball.

Poland will come away from this encounter feeling disappointed in themselves. Aside from a couple of counter-attacks, they were outplayed for most of the match and now sit last in their group with one point from three games.