Real Madrid – FC Barcelona: A Lopsided Scoreline Fails To Reflect The True Nature Of The Game (0-3)

Real Madrid had the better of their eternal rivals for most of the game. They threatened on the counterattack late in the first half and responded with a flood of shots after going down 1-0, but simply were not clinical enough. The exact opposite was true for Barcelona, who scored three goals on only four shots, and thus qualified for the Copa del Rey final.

The second leg of the Copa del Rey semifinals was finely balanced going into the Santiago Bernabéu. The aggregate scoreline was 1-1 and the first leg had produced a tense, back-and-forth affair that many fans expected to witness again.

Beyond the prospect of a tight encounter, each set of supporters also had their eyes on the games ahead. These two teams meet again in the league on Saturday, and Real have to play Ajax in the Champions League on Tuesday. Losses in those matches, in addition to the Copa game, could effectively knock Madrid out of all competitions.

FC Barcelona have their Champions League fixture against Lyon a week after next and a greater buffer of points in the league, but the potential to prevent Madrid from winning two trophies has its own significance. Thus, both sides were desperate for a win in order to boost their confidence ahead of a crucial stretch in the season.

In keeping with the importance of this game, Santiago Solari started an eleven that was almost unchanged from the team that played in the first leg. Vinícius Júnior got his customary start alongside Karim Benzema and Lucas Vázquez, while Casemiro slotted in at defensive midfield in place of the injured Marcos Llorente. Sergio Reguilón coming in for Marcelo was the one other adjustment Solari made, as the Brazilian had been on a run of bad form up until that point.

Barcelona manager Ernesto Valverde also made some changes. Malcom, who was arguably the man-of-the-match in the first leg, was inexplicably benched, along with Philippe Coutinho and Arthur. They were replaced by right back / central midfielder Sergi Roberto, right winger Ousmane Dembélé, and Lionel Messi.

Real Madrid started the game with an energetic high press that caused a couple minutes of trouble before Barcelona were able to work their way into the opposition half. From there, a predictable pattern of play emerged for the first half hour or so. Barcelona’s attacking structure, which was originally predicted to be a 4-3-3, formed up in a 4-4-2 / 4-2-3-1 shape, with Sergi Roberto essentially playing as a right winger. This left Ivan Rakitić and Sergio Busquets in a double pivot 4-2-3-1 is one of the most frequently occurring formations in football. The two most defensive midfielders are called a ‘double pivot’. and allowed Lionel Messi to roam freely as a false nine, a striker that constantly drops into midfield, leaving the position up front open for other players to dive into.

Roberto’s unexpected attacking position was a clever way of maintaining attacking balance on the right, given Messi’s tendency to roam inwards. However, the same would have been easily achievable had Valverde simply started Malcom, a natural wide attacker, instead of Roberto. Perhaps the Barcelona coach was wary of stacking too many offensive players in his eleven, but his conservative approach ended up hurting his team.

Without Malcom’s one-versus-one threat, which had been Barca’s sole way of disordering Madrid’s defensive structure in the first leg, Valverde’s team were toothless. They achieved 60% ball possession in the first half, but only managed to get one shot, which was a blocked Rakitić effort from outside the box.

A lot of Barcelona’s offensive troubles were due to Real Madrid’s defensive structure as much as it was down to the lack of a threat on Barcelona’s right-hand side. Solari organized his men in a well-disciplined 4-1-4-1 medium block  A medium block refers to a team that retreats in their own half out of possession, generally only disrupting their opponents some way into their own half. that covered all central passing lanes and stayed compact. Additionally, Lucas Vázquez diligently tracked Jordi Alba while Toni Kroos man-marked Busquets. 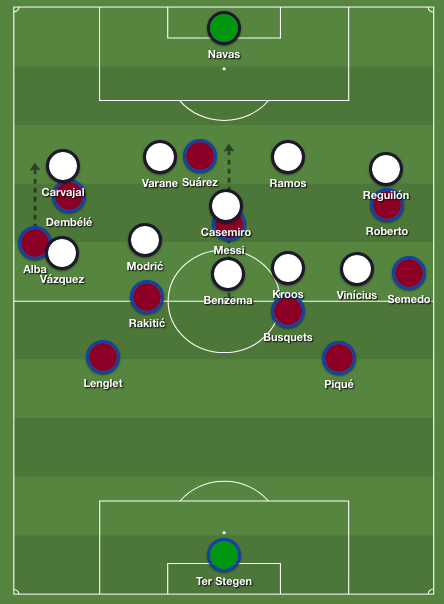 The role of Vázquez was exploited once, in the seventh minute, when Roberto drifted into the right halfspace If you divide the field in five vertical lanes, the halfspaces are the lanes that are not on the wing and not in the center. Because there is no touchline like on the wing, players have freedom to go everywhere. But this zone often is not as well-defended as the very center. This makes it a very valuable offensive zone to play in and a lot of chances are created by passes or dribbles from the halfspace. to receive the ball freely. Kroos, unsure of what to do, moved away from his assignment, allowing Busquets to get on the ball and spark a dangerous attack.

Such a passage of play never occurred again, limiting Barcelona’s progression into the final third  The one-third of the pitch that is closest to the opposition’s goal. to Messi one-twos, which rarely came off due to the congested nature of the midfield.

Real Madrid end the first half on a high

Aside from a scramble in the box and a Vinícius attempt from the edge of the box, Madrid had not created much to be proud of either. That changed though, starting in the 36th minute, when Casemiro won the ball in midfield and released Vinícius through on goal. The teenage phenomenon botched his touches and widened his angle, allowing Lenglet to block his shot. Vinícius recovered well and redirected the rebound into the path of Benzema, who was unable to finish one-versus-one with Ter Stegen.

The two opportunities sparked Madrid into life and suddenly the home side was roaring forward on the counterattack. Barely a minute later, Reguilón got on the ball in space and squared a pass that Vinícius sent over the bar. In the 40th minute, Vinícius got another chance that was blocked.

Who’ll be the first to blink at the Bernabeu? 👀@realmadriden 0-0 @FCBarcelona (1-1) pic.twitter.com/d3aUPPogJU

Despite these quality chances, both teams entered the half-time tunnel with the scoreline level. As is often the case in football, the side that had missed their moments to score were soon made to rue their profligacy.

In the 50th minute, Madrid made their first real mistakes in defense. Lucas Vázquez failed to stick tight to Alba, allowing the left back to play a through ball to Dembélé. Carvajal was half a second late to track the Frenchman’s run, allowing Dembélé enough space to play a cut-back for Luis Suárez. The Uruguayan striker made no mistake and finished at Keylor Navas’ near post.

Instead of throwing the towel, Real Madrid actually reacted fairly well to going down and immediately seized the initiative. They began to dominate possession and started relentlessly funneling the ball towards the left flank, where Vinícius could get on the ball. The eighteen-year-old delivered, torching the right-hand side of Barcelona’s defense and working in tandem with Reguilón to create chance after chance. The best of those shots came in the 61st minute, when Ter Stegen brilliantly saved a header from the aforementioned Reguilón.

Once again, Madrid were made to wonder what could have been, when Barcelona found the back of the net eight minutes later. Mirroring the first goal, Semedo was left free to play a through ball to Dembélé, who made a blind side If a defender looks one way, an attacker can try to make a run behind his back, on the side where he is not looking. This is called the blind side. run on Reguilón. The left back could only fruitlessly appeal for offside as Dembélé’s cross was bundled past Navas and into goal by Raphaël Varane.

Soon after the restart, Barcelona scored another, after Suárez drew a penalty on the counterattack. The Uruguayan striker shamelessly went for a Panenka finish, which left the home crowd dazed as it went in behind Navas. The game died down from then on, as Barcelona drew back, and Real Madrid only took one more shot before the referee blew the final whistle.

The result was certainly cruel on Madrid, who outshot Barcelona 14-4 and created the better chances. Nevertheless, the home team’s performance was not perfect. The absence of a structured counterpress After losing possession, a team immediately moves towards the ball as a unit to regain possession, or at least slow down the pace of the counterattack., which has been a theme under Solari due to the lack of an organized offense, allowed Barcelona those few moments in transition that allowed them to seal the game.

That is still not enough to say Barcelona deserved to win, and Valverde will be acutely aware of that. His team were almost completely unable to create from slow possession play and he will need to figure out how to overcome that – in addition to figuring out how to prevent Madrid’s counterattacks – if Barcelona are to prevail in El Clásico on Saturday. 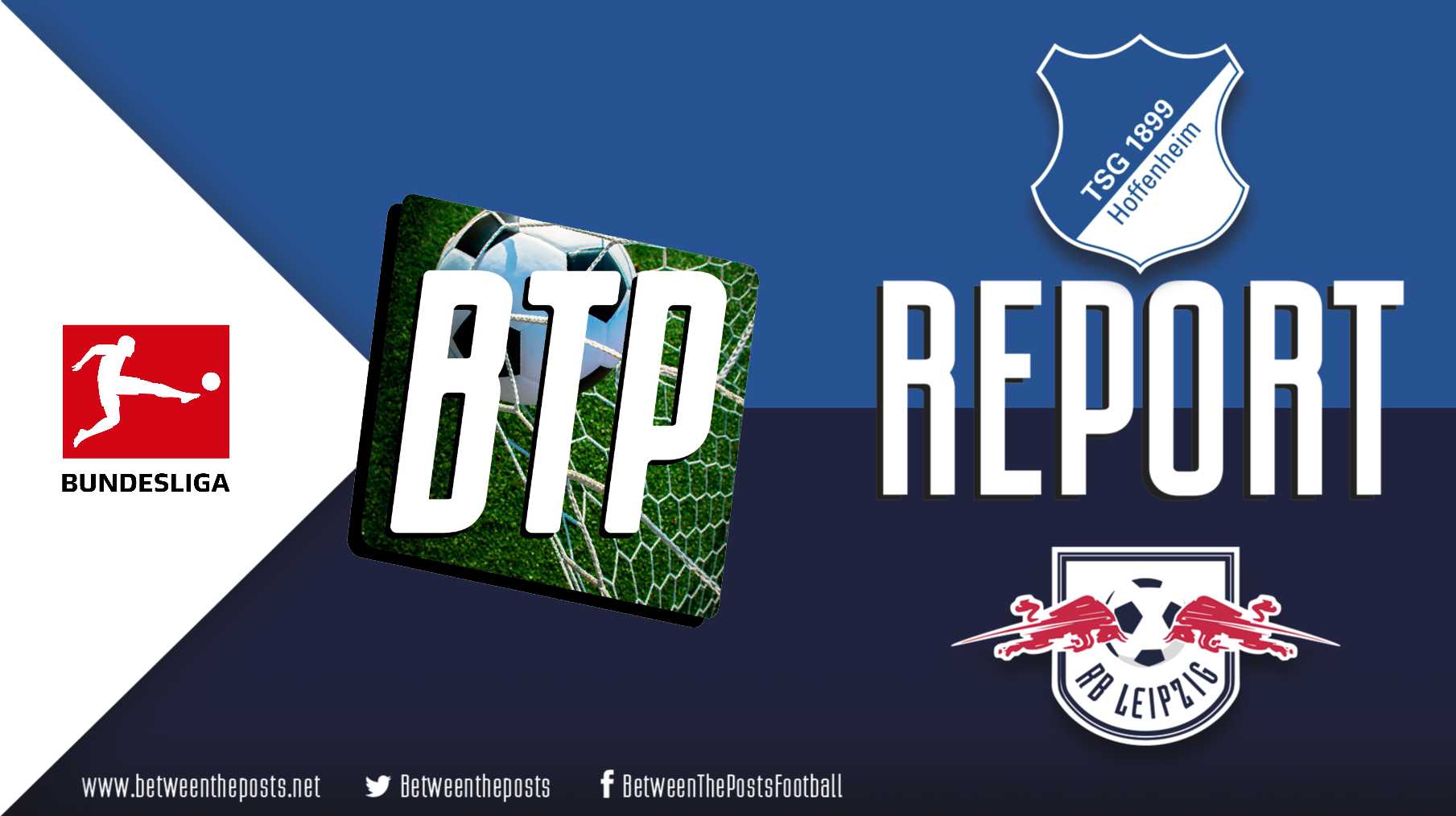 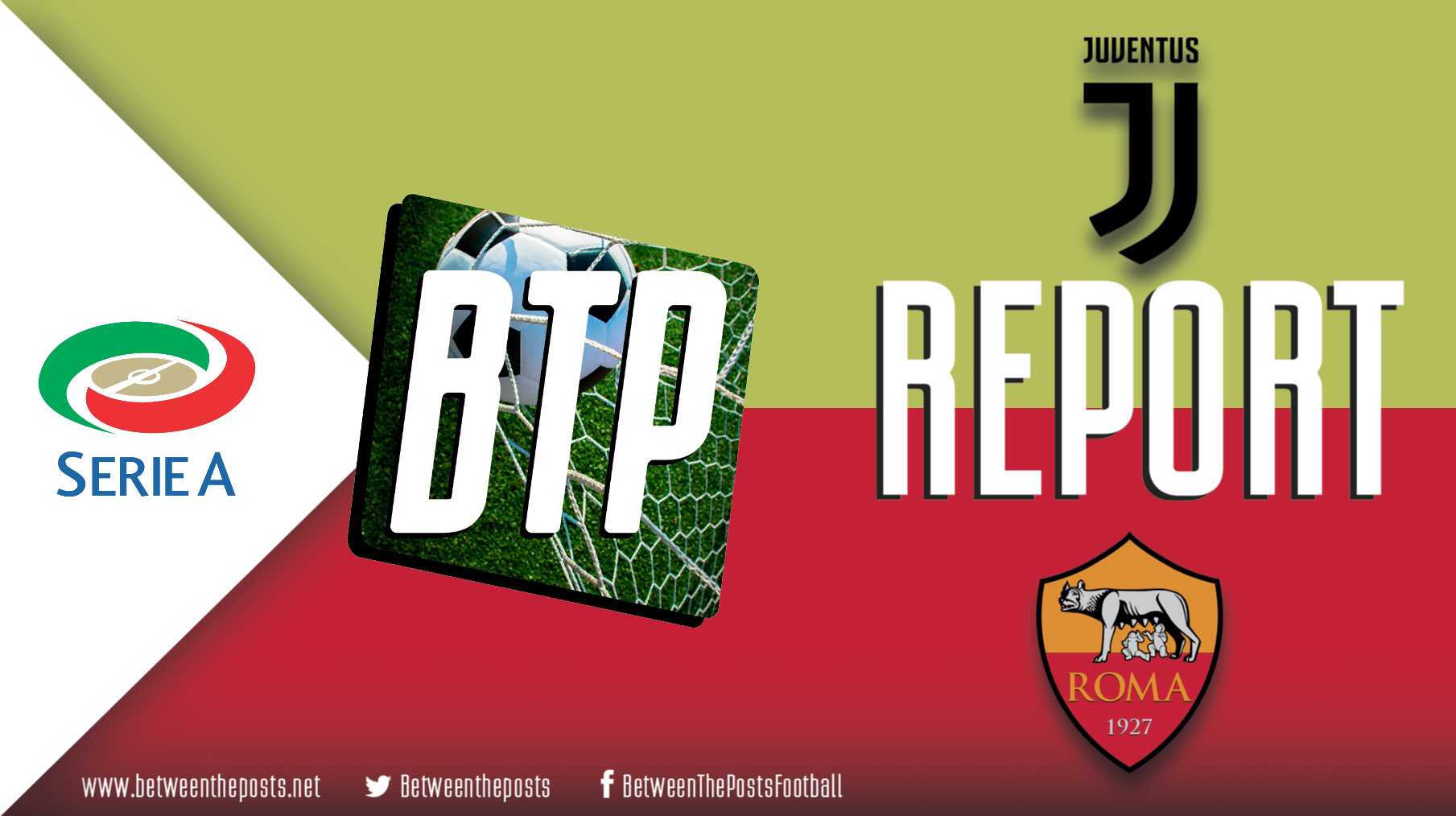