An early Karim Benzema goal caused Granada to self-destruct, enabling Real Madrid to take a 2-0 lead at the half. Luka Modrić extended the advantage before Granada attempted a late comeback starting with a mistake from Areola. Substitute James Rodríguez scored a late decider to secure the three points and prevent an embarrassing Real Madrid collapse.

After three games against Sevilla, Osasuna, and Atlético Madrid, Zinedine Zidane seemed to have gotten Real Madrid back on track. Their porous transition defense suddenly sealed up and they moved to the top of the table as a result. Hence, it came as quite a shock to Madridistas when they saw their beloved Blancos go 2-0 down in the first half of the Champions League fixture against Club Brugge in the Champions League. The second goal was entirely on Luka Modrić’s shoulders, but Madrid looked vulnerable as a collective every time Brugge pushed the ball into the final third. The one-third of the pitch that is closest to the opposition’s goal. The lack of defensive organization had seemingly reappeared out of nowhere.

In truth, Madrid’s defensive problems had only disappeared for a game. Against Sevilla, Zidane got it largely right, pressing in a coherent fashion with James Rodríguez and Toni Kroos stepping up in synchrony with Benzema. But that was also against a side that had the tenth best expected goals The amount of goals a team is expected to score based on the quality of the shots they take. figure in the league and a front line that lacked the pace and incisiveness to be threatening on the counterattack.

Versus Osasuna, Madrid’s lines were consistently penetrated by a more dynamic attack, only for Sergio Ramos and Éder Militão to repel everything that came their way. In the following encounter versus Atlético, Zidane went conservative and played Federico Valverde in midfield alongside Kroos and Casemiro. The workrate of the young Uruguayan helped cover the same lack of organization seen versus Osasuna, while Atlético’s labored offense did the rest – at that point, Atléti had recorded the fewest goals to start a league season in the Simeone era.

Granada are no offensive behemoth themselves, but there was still reason for concern coming up against the second-placed team in LaLiga. Diego Martínez’s side had only recently beaten FC Barcelona 2-0, displaying impressive coordination against the ball in a 4-4-2 medium-high block. A medium block refers to a team that retreats in their own half out of possession, generally only disrupting their opponents some way into their own half. A high block refers to a team that regularly leaves their own half out of possession, to disrupt their opponents far into the attacking half. A medium-high block is well… in between these two variants. Granada staggered their lines of defense so as to make it more difficult to play the ball between the lines and pressed opportunistically to break up Barcelona’s desire to play a short passing game.

One would think that starting James and Isco against such a system would be advisable, but both had only just recovered from knocks. Given a choice between the rusty Modrić, who had cost his side a goal versus Club Brugge and the industrious Valverde, Zidane went with the latter. The Frenchman also replaced Nacho with Carvajal at left back, as Marcelo and Benjamin Mendy were not fit to play, and the injured Thibaut Courtois with Alphonse Areola. Up front, Gareth Bale came in for Lucas Vázquez.

Martínez stuck with his 4-3-3 formation, anchored by goalkeeper Rui Silva and a back line of Victor Díaz, Domingos Duarte, Germán Sánchez, and Carlos Neva. Their best performer, Ángel Montoro, played as the single pivot defensive midfielder, situated behind interiors Yangel Herrera and Ramón Azeez. Antonio Puertas and Darwin Machís attacked the wide areas while Roberto Soldado played through the middle as his team’s striker.

Karim Benzema scores instantly and Granada lose all of their composure

The Santiago Bernabéu can be an intimidating place for both the home and away team. Depending on whether Madrid are winning or losing, the stadium can become a raucous atmosphere filled with explosive roaring or soul-sucking whistles. Two minutes in, the Bernabéu was furious with joy. Madrid had countered down the right wing following a Granada attack that caused half of Martínez’s men to appeal for handball against Sergio Ramos. Before the visitors could organize their back line so as to play Benzema offside, Bale had found his strike-partner with a beautiful outside-of-the-boot cross to put Madrid in front.

Minutes later, Montoro, their player of the season so far, came off injured and was replaced by Maxime Gonalons. These series of events, coupled with the resulting atmosphere, completely destabilized Granada. Every five minutes the camera zoomed in on a player or the coach gesticulating at everyone to calm down and use their heads. But it never happened, as their attempts to build from the back and attack Madrid’s box through wing patterns were consistently sabotaged by sloppy passes, funky touches, and constant miscommunication. 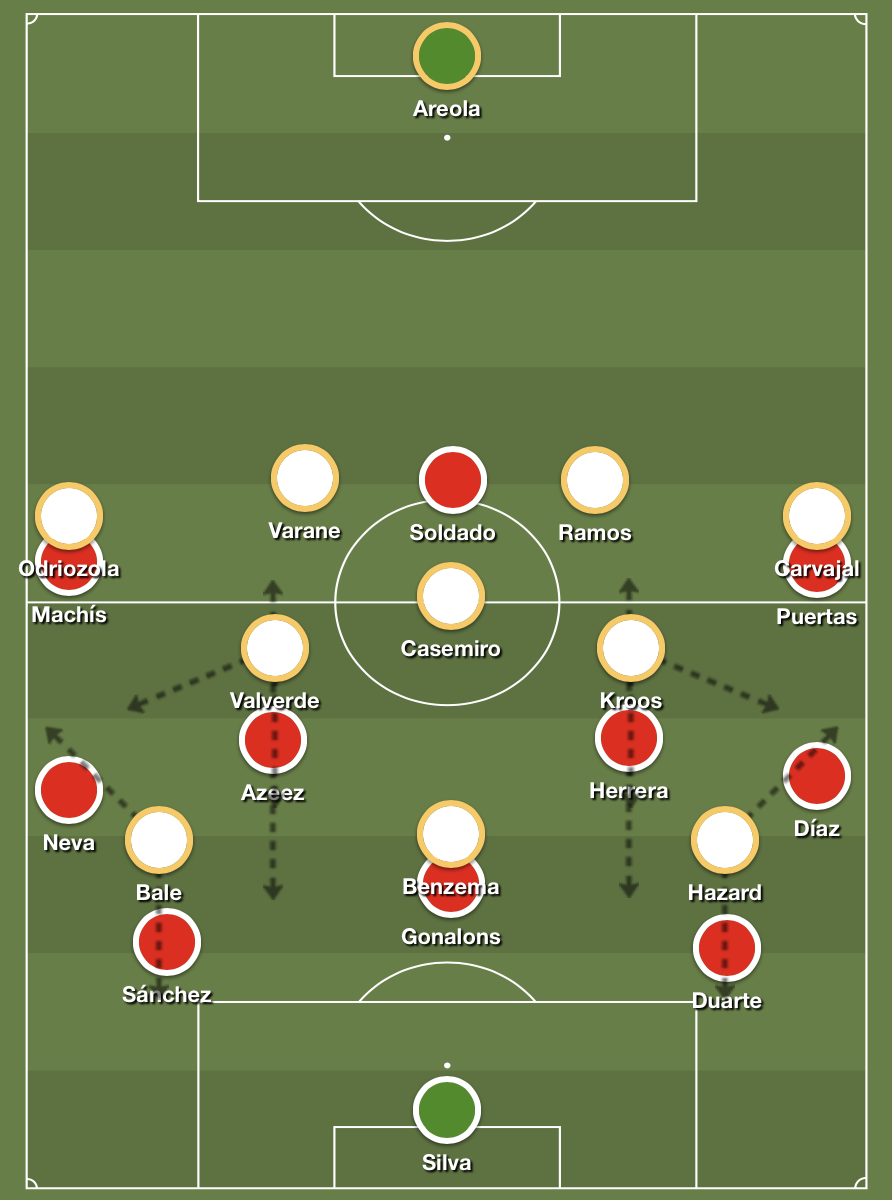 Real Madrid capitalized on this by pressing high; Bale and Eden Hazard would push up on Granada’s center-backs – when the moment was appropriate – while Kroos and Valverde aggressively man-marked Herrera and Azeez. This often forced the ball wide, where Kroos and Valverde would change gears and shift over to mark the fullback and the near side central midfield option. Valverde’s work in particular – combined with Granada’s horrible ball retention – was critical in producing numerous high-quality transition opportunities for Real Madrid, including Hazard’s goal at the stroke of half-time.

Though Madrid mainly thrived on the counterattack, they did manage to threaten in slower possession play. However, that threat still needs to be seen in the context of a game that was defined by fifty-fifty duels and end-to-end play, which made it difficult for Granada to organize defensively.

Still, Zidane’s side deserve credit for the way they capitalized on this through their high-tempo ball circulation. They gave Granada no respite, zipping the ball down the wings and looking to hit off-the-shoulder runs from Benzema and Bale at the slightest opportunity. This was enhanced by Hazard’s roaming into the center, Valverde’s constant activity, Odriozola’s bursting overlaps, When a wide player, most of the times a wing-back, runs outside to fill in the space left by a winger going inside with or without the ball, this is called overlapping. and Carvajal’s ball carrying actions and movements towards the halfspaces. If you divide the field in five vertical lanes, the halfspaces are the lanes that are not on the wing and not in the center. Because there is no touchline like on the wing, players have the freedom to go everywhere. But this zone often is not as well-defended as the very center. This makes it a very valuable offensive zone to play in and a lot of chances are created by passes or dribbles from the halfspace. 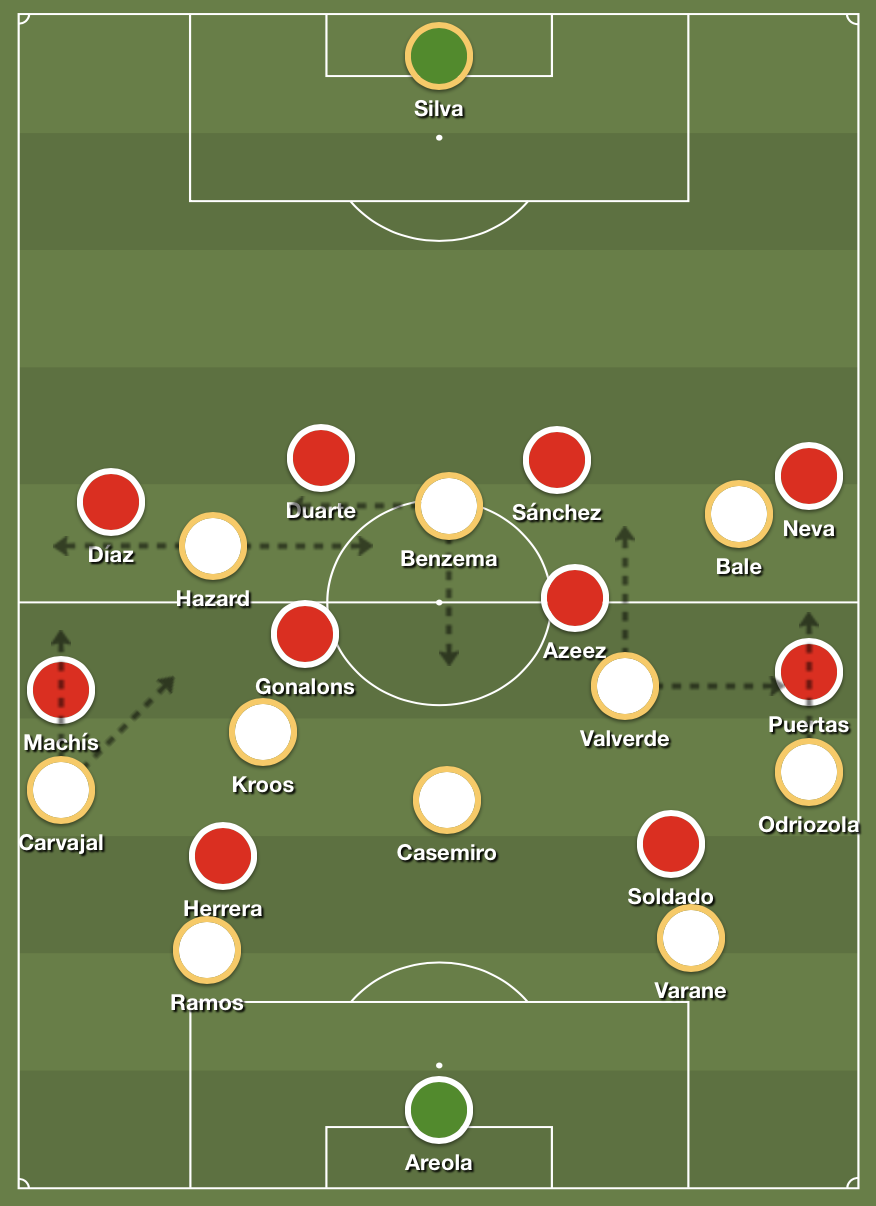 In such an environment, it became extremely difficult for Granada to pin play on the wing with their press. They attempted to be extremely compact once play shifted wide by bringing their far side The far side is the side of the pitch where the ball is not. winger into midfield. This allowed one of Gonalons or Azeez to mark Casemiro, but Madrid’s movement and speed of passing kept Granada’s already malleable shape constantly moving, allowing for gaps and passing options to appear.

After fifteen minutes of calm in the dressing room, Granada approached the second half in a manner more characteristic of their prior performances. They looked less rushed on the ball, their decision-making was quicker and sounder, and their defensive organization finally looked capable of controlling Madrid’s buildup phase.

Part of this had to have been influenced by the home side’s own dip in performance, which is only natural when one’s advantage depends on ultra-high intensity running. Such activity is impossible to keep up for long periods of time and, given the scoreline, it made sense to slow things down and seek to control the game.

Despite this strategy’s obvious negative effect on Madrid’s offensive production, Zidane got to enjoy another goal from his team; Modrić blasted a long distance shot into the net to make it 3-0 after good work from Hazard on the left. The strike pummeled the spirit out of Granada and seemed to ensure an easy victory for the All Whites.

Then, in the 68th minute, Areola made a critical mistake, accidentally kicking substitute Carlos Fernández’s leg when attempting to play the ball. Granada converted the penalty and the game reverted to chaos – this time with the away side surging forward and instigating danger. In the 77th minute, Granada scored from a corner, making the Bernabéu restless with anxiety. Their worries were extinguished in the dying embers of the game; Madrid took advantage of the return to an end-to-end context and launched a counterattack that enabled them to score through substitute James Rodríguez.

Zidane is famous for continually emphasizing “intensidad” no matter the reasons for a particular result. To him, almost everything can be solved by putting in more effort and going the extra mile. It remains to be seen whether that will be enough to paper over structural issues over the course of an entire season, but it did the job today in a game that was defined by chaotic midfield duels instead of specific tactical beats.

For that reason, the focus has to be on the individuals, with special consideration given to Fede Valverde. After two seasons with very few minutes in the top flight, Valverde proved that he has many qualities to bring to the table: a good work-rate, strong ball carrying, and impressive defensive ability. However, questions remain over his creative nous and ball progression skills, which contrasts sharply with the concerns surrounding Hazard. No one doubts the Belgian’s quality, but he continues to look out of shape and sluggish. Perhaps his first goal in a white shirt will finally spark a return to the form that Real Madrid paid 100 million euros for.

Granada will be disappointed with their performance notwithstanding the admirable fight-back at the end. They had the tools to frustrate a rather flat midfield but lost their composure after an early goal. Remaining calm and focused can be just as important as having good tactics, and that is something that Granada must learn. If they can take lessons from this defeat, there is still much to look forward to in a season where they have only just returned to the first division. 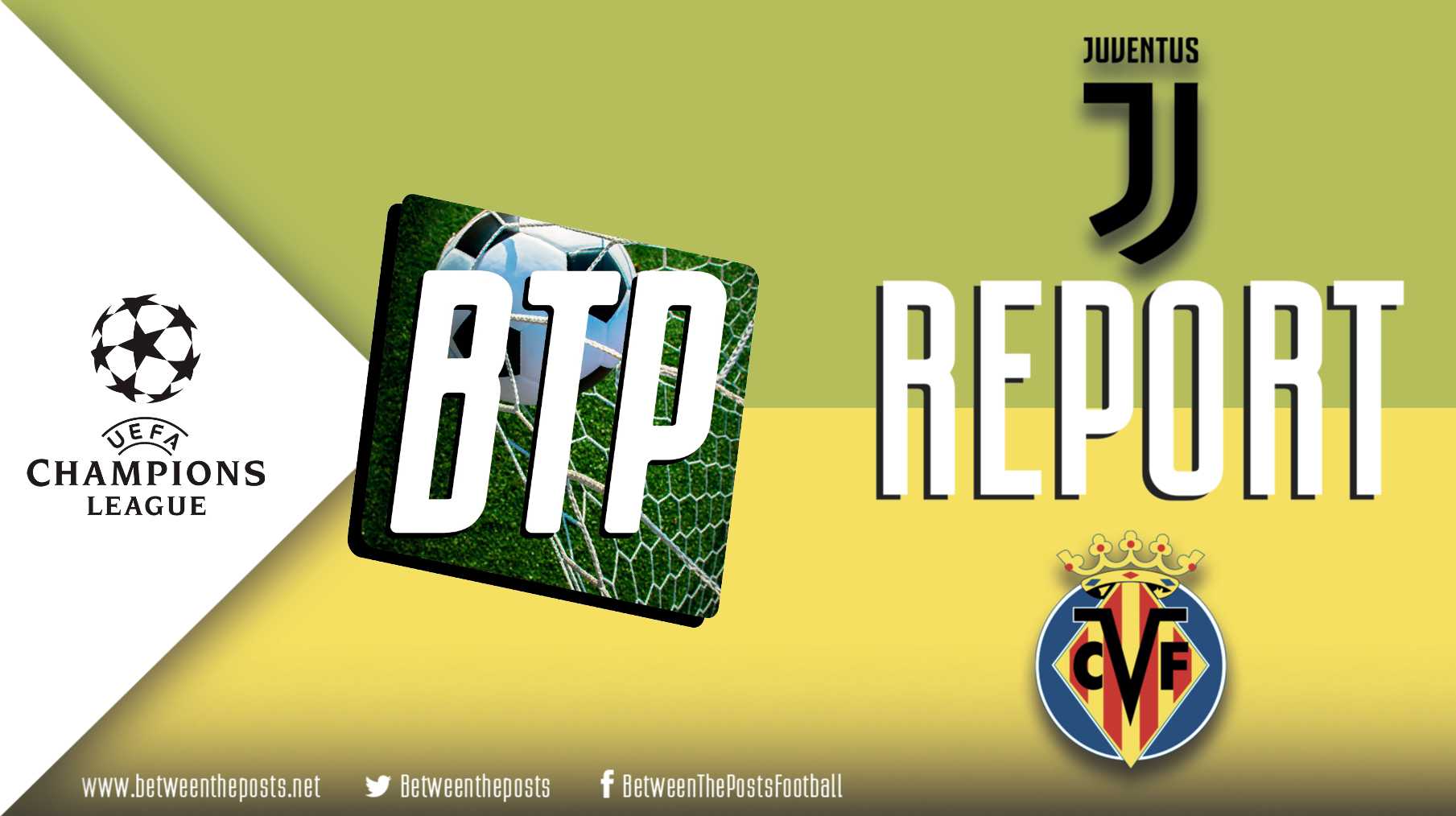 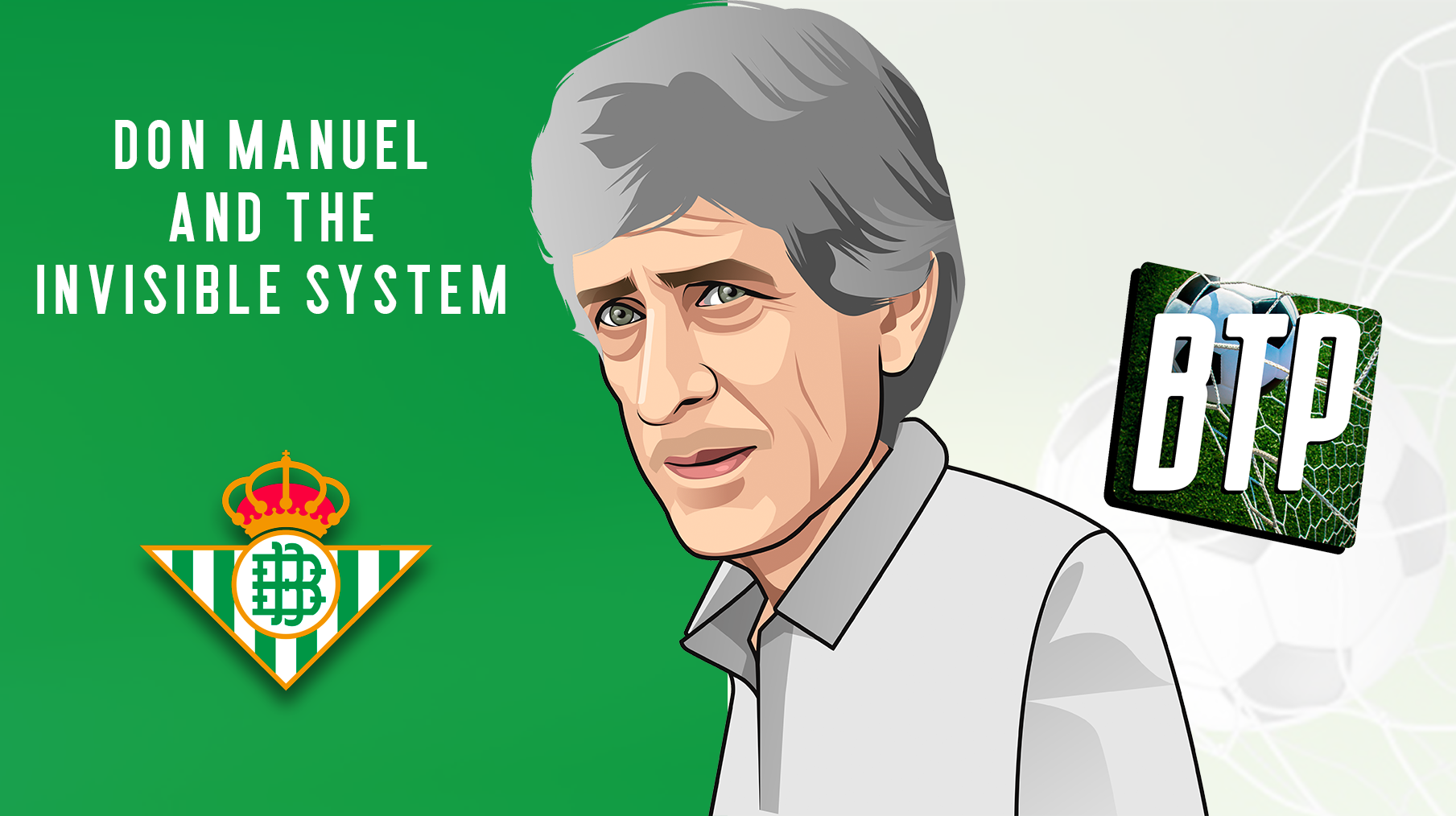