Once Sweden settled into a comfortable shape, Spain struggled to break the hosts down. Predictability in attack, coupled with lingering issues in defensive transition, plagued Spain throughout the evening, as the visitors were lucky to escape with a point against a resolute Swedish side.

Heading into Tuesday night’s match against Sweden, on paper Spain’s Euro 2020 qualifying campaign looked relatively straightforward. Manager Robert Moreno’s side had amassed seventeen points in seven matches and were a single point away from qualifying for the summer tournament. However, dig a bit deeper and the underlying issues of the squad are clear to see.

Inflated victories over the Faroe Islands and Malta aside, Spain struggled to assert themselves in what should have be an easy group – filled out by Sweden, Norway and Romania. Heading into their match against Sweden, the European giants had mustered just 18 goals – only one better than Sweden up to that point.

The lack of offensive thrust has led Moreno to experiment with his side’s formation and personnel. Against Sweden he elected to use a 4-4-2 diamond with Rodri at the base and Dani Ceballos at the attacking tip. Filling out the midfield were Thiago Alcántara and Napoli’s Fabián Ruiz. In defense, Sergio Ramos’ suspension due to card accumulation meant a center-back tandem of Iñigo Martínez and Raúl Albiol was fielded, while Juan Bernat and Daniel Carvajal drew in at left and right fullback respectively. Up front the manager went with Gerard Moreno, who has been in good form for his club side Villarreal and Mikel Oyarzabal.

Despite a difficult 3-0 loss to Spain in June, Sweden have remained largely consistent. The solid defensive approach adopted by manager Jan Andersson at the 2018 World Cup has carried over into Euro 2020 qualifying and the result has been a physical side with a broad understanding of their game plan and a willingness to carry it out.

Andersson remained consistent in his approach against Spain, sticking with a flat 4-4-2 formation, with Marcus Berg acting as the second striker in support of his attacking partner Robin Quiason, a regular starter for FSV Mainz in the Budesliga. In midfield, RB Leipzig’s Emil Forsberg acts as the main creative threat, generally cutting in from the left. Krisstoffer Olsson and Albin Ekdal do the running in central midfield, while the hulking center-back duo of Victor Lindelöf and 34-year-old captain, Andreas Granqvist, guard against any aerial threats. In goal, Sweden are backed up by the reliable Robin Olsen, who now plies his trade for Cagliari.

Spain started the match well, moving the ball at pace, shifting the Swedish defense with acute long balls to their fullbacks, Bernat and Carvajal, who drove up the flanks and provided the width, as is very common the 4-diamond-2 formation. The speed of play seemed to unsettle Sweden early on, as the hosts struggled to collect themselves defensively when Spain switched play. The result was a number of glorious chances for the guests early on with all of Thiago, Fabián and Rodri had clear looks at goal.

After only twelve minutes Spain had amassed over one hundred passes to Sweden’s eight. This continued through the first twenty minutes of the fixture, as Spain forced more last-ditch deflections out of the Swedish defense, while frequently testing Olsen in goal.

Unable to capitalize on their early chances, Spain began to slow slightly, meaning Sweden pushed higher up the pitch and looked to hit Berg with long balls. The striker held the ball up well, allowing for a shift in territory and for Sweden to begin bringing a high press – putting pressure on keeper, David De Gea, who exhibited discomfort in playing out of the back.

It was De Gea’s uneasiness on the ball that led to Sweden’s first real chance of the match in the 33rd minute. The Spanish keeper played a soft pass to Rodri, who was well-marked and as a consequence turned the ball over at the edge of the area. A simple ball into the box was met by Quiason, who forced De Gea to make the first of what would end up being a number of stellar saves.

Now looking more comfortable, Sweden settled into a compact shape in the middle of the pitch – allowing Spain’s fullbacks to maraud up and down the wings – confident their center-back duo would be capable of dealing with any crosses. It was an educated risk, as neither Moreno, nor Oyarzabal are a natural threat in the air, as they both tend to occupy wide areas with their club teams. Moreover, with possession being pushed out to the flanks and the two strikers uncomfortable in the role of target man, Ceballos was often left as the lone option centrally. 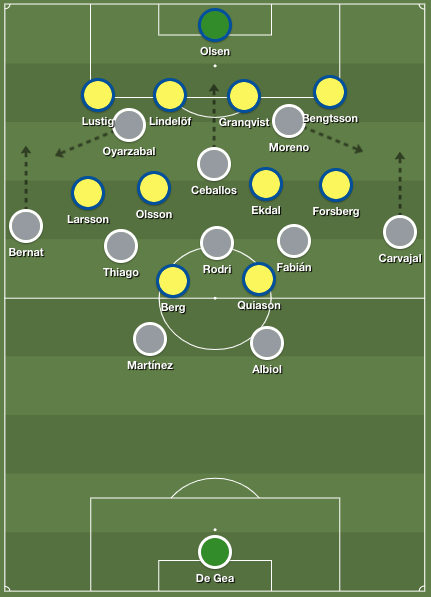 Spain also lacked a midfield player willing to attack the defense through the middle of the park. Fabián, Thiago, Rodri and Ceballos are all deft passers of the ball, but show little interest in taking defenders on in one-on-one scenarios high up the pitch. This lack of incisiveness made it easy for Sweden, a side adept at keeping their shape, to defend against what became a monotonous Spanish attack.

A lack of verticality

Emboldened by Spain’s lack of dynamism through the middle, Sweden came out in the second half and immediately began to press with greater intensity. Once again, De Gea struggled to handle the pressure and Spain stumbled in trying to build play. It was this moment that Spain’s inability to play vertically and lack of a plan B became especially noticeable. It was obvious that Sweden were not going to allow for easy exits from their defensive third and yet continually Spain tried, with no avail, to extricate themselves.

In the fiftieth minute Sweden were rewarded for all their hard work, as another straightforward ball was put into the box and headed goal-ward by Berg; De Gea rescued Spain with a spectacular diving save, which he followed up with an equally impressive recovery on a shot from Forsberg. Unfortunately for the goalie, he could not bail them out a third time and Berg bundled the ball home from the goal line.

After taking the lead, Sweden kept the pressure on and De Gea was required to make a few more sprawling stops to keep his side within one. To make matters worse, the Spanish keeper was unceremoniously forced off with an injury after an hour of play  and replaced by Kepa Arrizabalaga.

Sweden remained on the front foot until Spain brought on Rodrigo Moreno for Thiago in the 66th minute and shifted into a more familiar 4-3-3 formation with Oyarzabal taking up a position on the left wing and Rodrigo slotting in on the opposite flank. 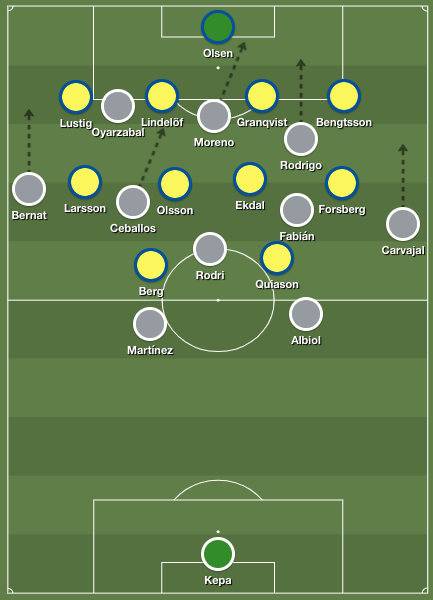 The change obligated Sweden to shift into a low block, A low block refers to a team that retreats deep in their own half out of possession, generally only disrupting their opponents around their own box. as Rodrigo helped to stretch the field with clever runs and Ceballos was allowed to drop deeper and help Fabián pull the strings. As Sweden transitioned into their low block, Spain were able to manufacture chances, but once the hosts settled, it once again became difficult for Moreno’s side to influence the game through midfield.

At that point, it looked as though Spain were going to have to wait until the next international break to confirm their place in Euro 2020. That is until a 92nd minute corner was poorly cleared by Swedish substitute, Alexander Isak; the ball landing at the feet of Fabián, who hit it low, across goal to Rodrigo, who was waiting on the goal line to tap it home. The draw was welcomed by frustration from Sweden and a sigh of relief from a Spanish squad with a great deal of work still to do.

Sweden played well and showed more adventure tactically than one would have expected against a traditionally strong European side. The result against Spain did not influence Sweden’s overall place in the group standings, but did narrow their lead over third place, Romania, to a single point. The two sides will meet in November – a win would confirm Sweden’s place in the Euros this summer.

As for Spain, the draw and early entry into the European Championship only serves to paper over what have become serious issue within the national program. It remains unclear if Moreno is the right man for the job, as he seems incapable of varying Spain’s offensive style and their predictability is giving way to subpar results.

When Luis Enrique took over following the country’s disappointing showing at the 2018 World Cup there were signs that Spain were capable of adjusting their style of play. Enrique brought a more varied approach to the attack and had the squad playing with greater verticality, while not betraying their roots as a possession-based program.

These changes seem to have dissipated under Moreno and Spain look increasingly ponderous on the ball. Perhaps more concerning is the lack of talent in Spain’s defensive ranks. There has been a substantial debate in the Spanish media around Ramos’ continued inclusion in the starting eleven. However, at this juncture there does not seem to be a natural replacement for the center-back – evidenced by the return of a 34-year-old Albiol.

Early qualification does afford Moreno time to engage in greater experimentation, both in terms of tactics and personnel. Nonetheless, if Spain does not begin to show progress in the coming months the federation may be forced into a managerial change. 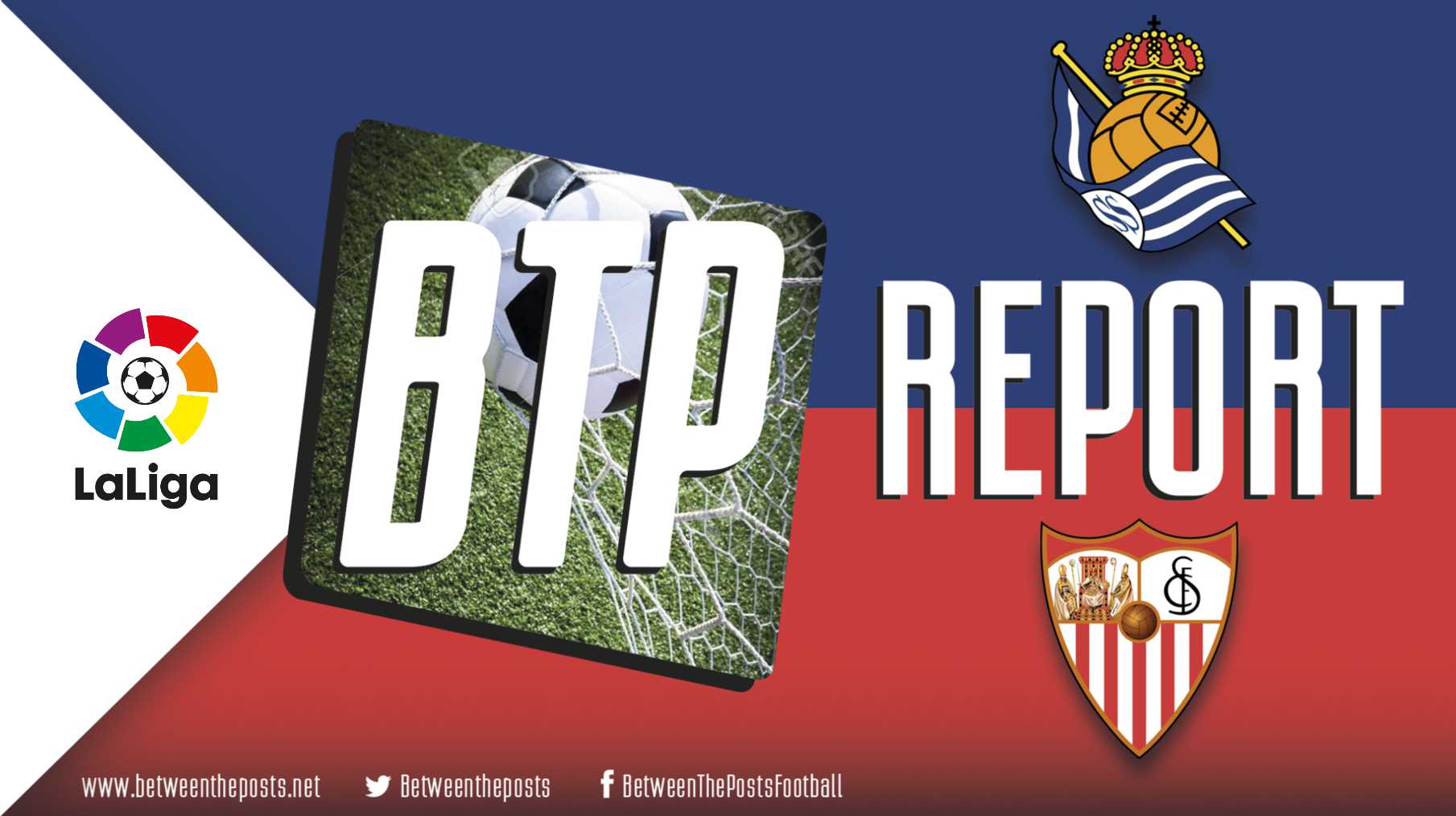 Real Sociedad – Sevilla FC: Despite Januzaj, this was a bad game (0-0)