Liverpool’s luck had to change some time after a run of five games without a victory and this was the perfect occasion for the champions to regain their flair. Facing a Spurs team that had nearly beaten them last time, Liverpool put on a phenomenal second half display to clinch the win, with Sadio Mané’s performance highlighting the champions’ long-awaited return to form.

As the story of the 2020/21 Premier League season continues to unfurl, a number of teams have propped up as contenders for the title. This game marked a meeting between two such outfits, with champions Liverpool looking to revitalise their title defense with a first win in 2021. In their way stood a Tottenham side that has looked equal parts refreshed and devastating under José Mourinho, who has designs of his own on the title and the top four.

Given the number of injuries that have befallen Jürgen Klopp’s men, it was a boost to see the team sheet. Having been rested for the FA Cup tie against Manchester United, Joël Matip returned as the center-back alongside captain Jordan Henderson, with Trent Alexander-Arnold and Andy Robertson making up the defense in front of Alisson. The midfield saw the inclusion of James Milner alongside Thiago and Georginio Wijnaldum, while the attack featured the usual front three of Sadio Mané, Roberto Firmino and Mohamed Salah.

Having gone with a different approach in their previous encounter, José Mourinho sprung another surprise when the team sheets were revealed. Eschewing his usual 4-2-3-1 formation, the Portuguese opted for a 3-4-3 shape, with Ben Davies, Eric Dier and Joe Rodon making up the defense. Ahead, the midfield pivot comprised of Pierre-Emile Højbjerg and Tanguy Ndombele, who were flanked by wing-backs Matt Doherty and Serge Aurier. The front three was the usual trio of Heung-Min Son, Harry Kane and Steven Bergwijn, who between them possessed the kind of guile required to unlock the Liverpool defense.

Anyone expecting a fast paced, quality affair would have been delighted with the opening portion of the game as both teams demonstrated how incisive they could be. First, it was Liverpool who got in behind the defense, with Mané knocking down a pass for Salah and receiving it in behind for an excellent opportunity. The pass took a slight deflection but fell kindly for the winger, who was only able to shoot wide from that position. Liverpool would seemingly rue this opportunity minutes later when an outstanding counterattack saw Son score at the other side; however, they were let off after the goal was ruled out for a tight offside. Still, the rapid exchange highlighted what each side could do – only it would be a long time before we saw anything approaching it for the rest of the half.

Lack of incision drops the pace

Post the initial exchanges, both teams fell into a pattern from which they would not emerge till late in the first half.

Liverpool’s shape out of possession was intriguing, as the front three pressed the center-backs diagonally. While Firmino screened passes into midfield, Milner and Thiago stayed tight to Højbjerg and Ndombele to disrupt Spurs’ attempts to build through the middle. This often resulted in a 4-2-4 shape, as Thiago moved closer to the front three to mark Ndombele. In theory, this was a good idea, as Spurs’ wing-backs often took up advanced positions while the attackers stayed narrow and were covered by the Liverpool defense. However, Ndombele was often able to beat Thiago in one-versus-one situations, which allowed Spurs to progress and forced Liverpool to drop and remain compact. 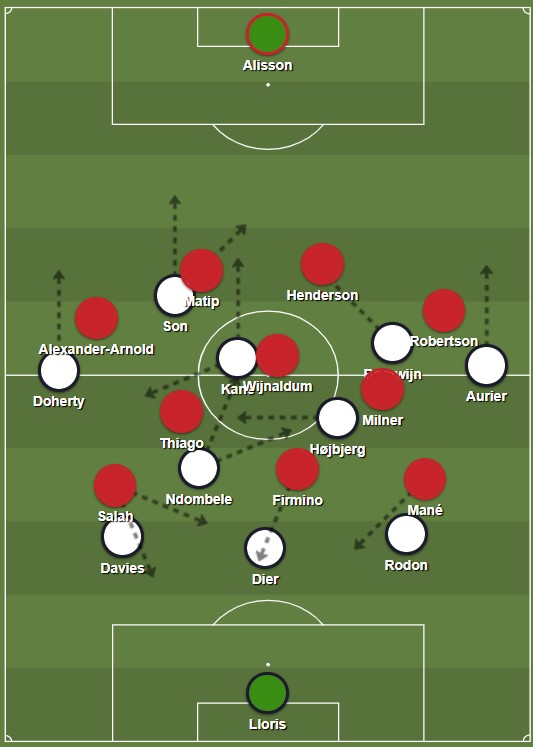 Spurs building up against the Liverpool press.

It was interesting to see how proactive Spurs initially seemed to be, as they pushed players forward and allowed Ndombele to join the attack when the ball was in advanced areas. The primary idea for Spurs was to create situations of semi-transition, either by executing the occasional press on the Liverpool buildup or engage the away side’s players in midfield duels. The latter option proved successful, as Liverpool’s lack of sharpness in circulation allowed Spurs intercept passes and immediately move forward. Aurier and Bergwijn were active in these duels, as Liverpool often tried to build through the left before horizontally circulating it to Salah and Alexander-Arnold. Even if this didn’t work, the ball over the top was always a weapon, with Son’s electric pace capable of causing problems for Matip and Henderson.

Unsurprisingly, Liverpool enjoyed a lot of the possession, though Mourinho was equally happy to cede the ball to them. When in possession, the away side would play almost with a back three, as Henderson and Alexander-Arnold took up positions as ‘half-backs’ on either side of Matip. Rotations in midfield were common, as Thiago and Wijnaldum dropped to become the six during various phases. But problems arose in the pace of circulation, as well as the lack of movement across the frontline. 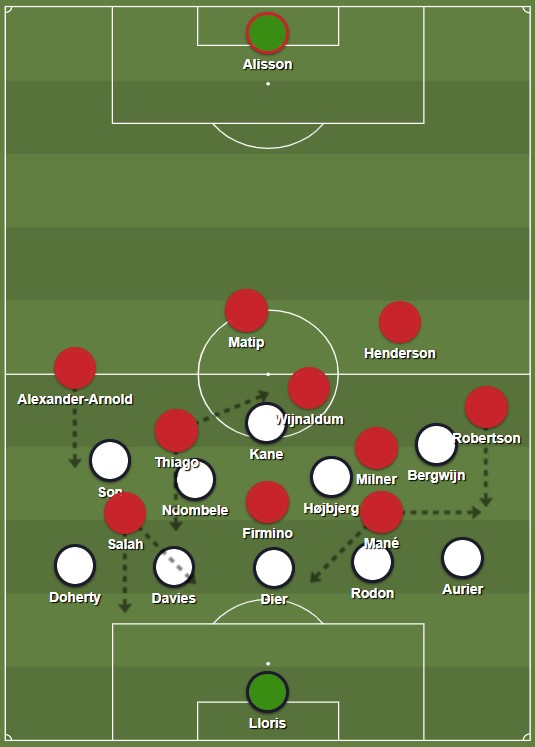 Liverpool set-up against Spurs’ 5-2-3/5-4-1 low block. A low block refers to a team that retreats deep in their own half out of possession, generally only disrupting their opponents around their own box.

Due to Milner and Wijnaldum’s conservative passing, Thiago could often be seen pushing up as an attacking midfielder to support Salah and Alexander-Arnold on the right. However, this only led to stale possession, as Liverpool lacked the quick interchanges and movements that characterised their first game against Spurs. With Spurs defending from a 5-3-2 block – which flattened into a 5-4-1 shape on occasion – they were content showing Liverpool to the touchline, while retaining their threat on the break with periodic counterattacks.

With Salah being denied space and Spurs’ compactness counteracting Firmino’s dropping movements, the responsibility for moving off the ball fell to Mané, who often created opportunities by running the channel between Rodon and Dier. The winger’s persistence would pay off spectacularly towards the end of the first half, with Liverpool breaking their seven-hour goal drought in the league with a superb opener. With Mané receiving a superb pass over the top and drilling a low cross, all Firmino needed to do was get a touch – half-time, 1-0 to Liverpool.

Fireworks and drama characterise the second half

While Spurs’ first half game plan was clear, it was heavily reliant on Son and Kane breaking through the Liverpool lines. The quality of the two overshadowed Spurs’ issues in possession, as the team’s attack was often disjointed from the buildup. Issues with occupation of space and quick interchanges blunted Spurs’ threat so far, though they still managed to create some opportunities. However, the halftime substitutions of Kane and Aurier due to injury had the potential to exacerbate these problems.

In any case, Klopp’s side opened the half in superb fashion, as their attacking thrust came to the fore. While Salah couldn’t find the net after Firmino had shaken off the defense, Mané was able to receive and turn past Doherty (now the right back) with one move, before firing a shot that Hugo Lloris palmed away. However, this would be a mistake, as Alexander-Arnold had free rein to aim a shot low into the bottom corner to add to the away side’s lead.

In keeping with how their season has gone, Liverpool’s joy did not last long, as Højbjerg managed to score with a rocket just minutes after Spurs conceded. With Kane and Aurier off, Spurs had shifted to a 4-2-3-1/4-3-3 shape, with Harry Winks joining Højbjerg in the pivot and Erik Lamela slotting in as the No. 10 behind Bergwijn, Son and Ndombele. However, it was a lot more fluid in reality, as Davies continued to act as a third center-back while Højbjerg had a freer role with Winks staying deeper. Further, the versatility of the attackers meant they could exchange roles and positions, which was a factor in Spurs’ play becoming a lot more fluid on the ball.

Liverpool retained the upper hand, as a Salah goal was chalked off for a Firmino handball in the buildup. Despite the decision, it was a flowing move that involved Thiago and Mané, the latter of whom capped off his night with a deserved goal after ghosting in behind Rodon to score from an outstanding pass from Alexander-Arnold. 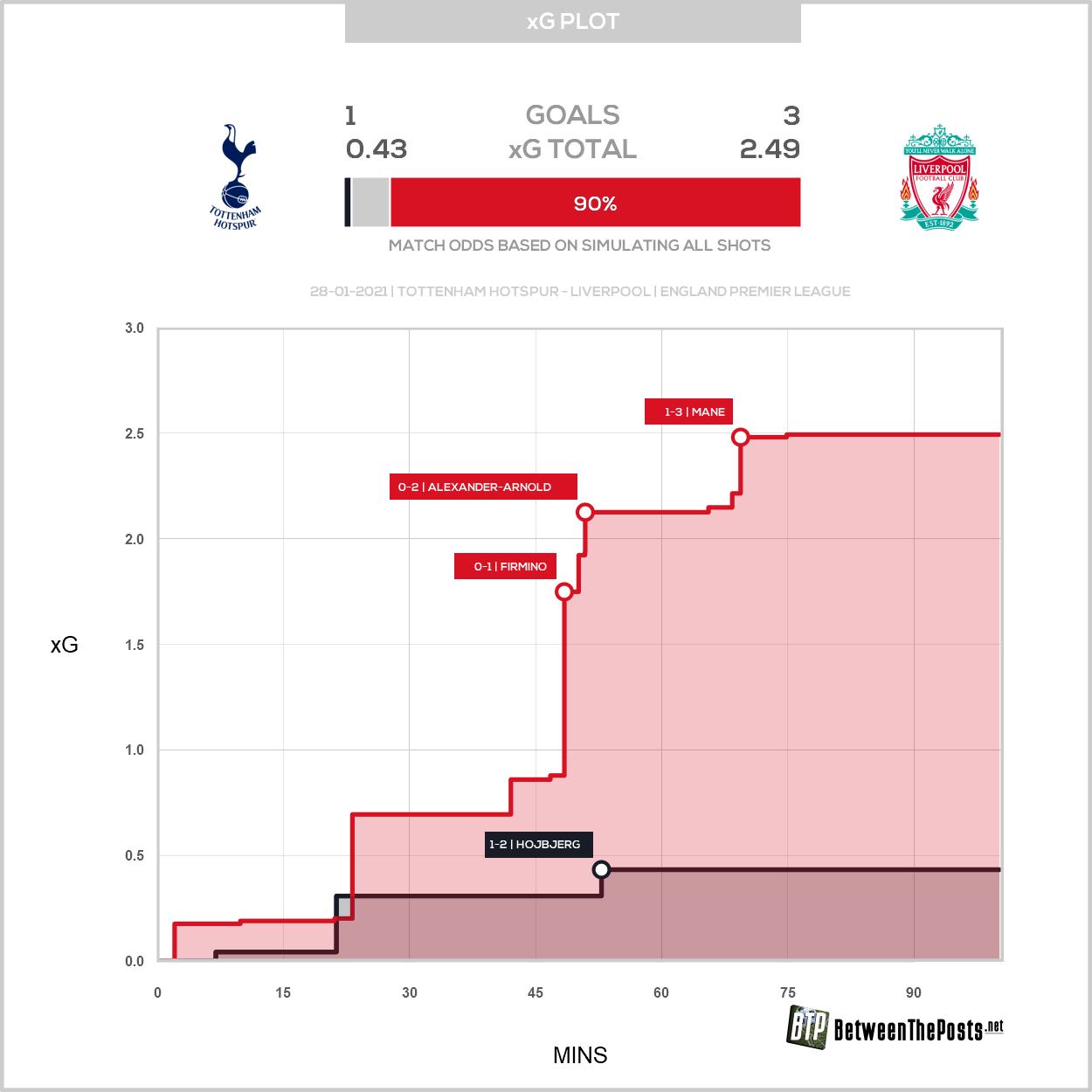 A first win for Liverpool in 2021 will go a long way in restoring momentum to a side that has hit a rough patch in recent times. While some level of drop-off is expected after the team’s incredible performances over the past two seasons, Liverpool still have the talent and tactical nous to defend the Premier League title. However, they will have to replicate the consistency from the initial part of the season to stand a chance, especially with Manchester City once again looking like favourites for the title.

The vagaries of the season continue to affect Spurs, who have gone from dark horse contenders to top four hopefuls over the last two months. While Mourinho’s approach has produced some good results, it is fair to wonder how much Spurs can achieve with Kane out because of injury. The coming weeks will test the limits of the Portuguese’s ability to maximise his resources, as Lo Celso and Bergwijn have yet to perform to the level that was expected of them when they were brought in. 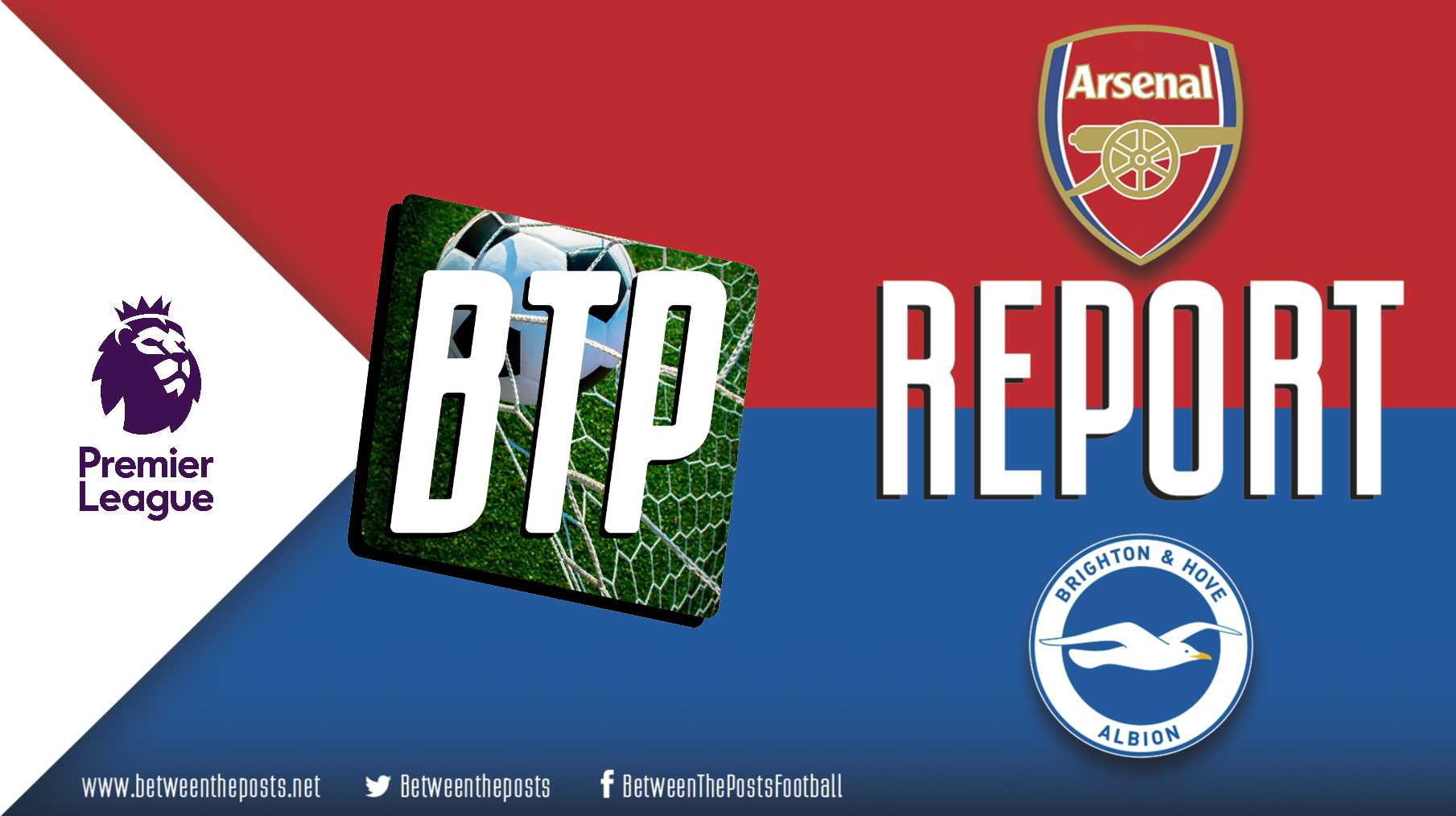