It was tight, it was fierce, and chances were scarce. As expected, Watford – Wolves turned into a tense affair with heated tussles in a match that was much more down to moments, as opposed to what came of sustained periods of pressure.

The battle for the final European spot in the Premier League is overshadowed by the title race and the race for top four. It is a good jostle however, the contenders being Leicester City, Everton and the two sides that were put up against each other here. Both of these clubs had rescheduled home games in midweek. Watford drawing 1-1 to Southampton whilst Wolves swept aside Arsenal 3-1.

There were very few changes for either side. Wolves coach Nuno Espírito Santo named the exact same eleven and 3-5-2 system that he fielded on Wednesday night.

Javi Gracia, however, made slight alterations but only in defense, where the fullbacks – Daryl Janmaat and Adam Masina – dropped to the bench as Kiko Femenia and José Holebas took their respective places. In the center, Adrian Mariappa was reinstated alongside Craig Cathcart in Watford’s 4-4-2-come-4-3-3 setup.

Little to split the two sides in the opening period

In the first half hour, fans were starved of any good chances, as Gerard Deulofeu’s twenty-fourth minute shot was a scarce highlight. What it stemmed from, though, was an aspect of Watford’s on-ball play that was present throughout.

In that specific instance, following some aerial duels from a throw-in, Watford’s compact structure managed to swarm the space around the ball. Subsequently, as they did so impressively in all circumstances, they combined with one-touch, two-touch football, looking for lay-offs into runners off the ball and give-and-go’s to evade any pressure from Wolves.

On this specific occasion, Deulofeu had identified the space on the right and made a run, as the ball eventually arrived down the channel. With some room to attack, the Spaniard made a go for goal but slipped at the crucial moment.

Watford attacked with a, let us say, undefined attacking structure. It was all about working to create options for potential attacking targets. As Étienne Capoue pivoted around the center-backs, sometimes dropping wide and to the right of them – since that was the preferred side of their buildup play – it left some room in the center for others to drop into. 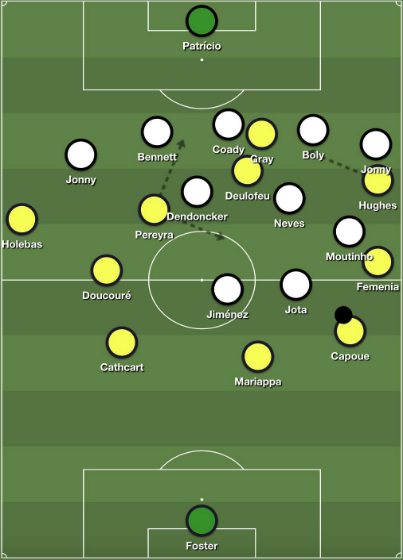 Watford’s possession-based setup, veering to the right side.

In particular, Roberto Pereyra seemed to enjoy dropping into that pocket of space right in the middle of Wolves’ 3-2 central defensive setup. By also doubling up on the width at the near-side – positioning Will Hughes there – the hope might have been that they could stretch the midfield across and find Deulofeu and Gray more easily. Usually, they did go direct into the two players. Into feet, though. When they did, Pereyra and Hughes would be close by, meaning the recipient could play a first-time lay-off to either side, which then saw the next receiver drive with the ball already forward-facing.

Despite the clever overloads When one team has more players in a certain area or zone than the other team. it provided, the final stage of this attacking plan was the biggest let down. Gray’s runs were quite one-dimensional, almost always through the center, meaning that there was rarely much space for Holebas on the switch and so the attackers were forced into shots from range, which were easily blocked by the crowd of Wolves bodies already back behind the ball.

Wolves were not so successful in possession, either. As we have got to know them this season, their game plan was much more about stretching the opposition, playing direct and long with almost every other pass.

More often than not, Rúben Neves, the nominal holding midfielder, would drop into the first line seeing it become a four. Because of this, Watford’s three pressers could not then press high without leaving a spare man available.

At the same time, there would be synchronized attacking movements, such as Diogo Jota and Raúl Jiménez both dropping towards the ball, in order to open the space for direct runs from Jonny Otto, Leander Dendoncker and Matt Doherty. 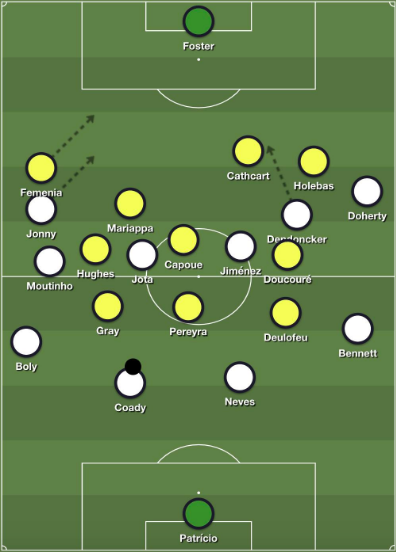 Wolves’ possession setup, with Neves and the two strikers dropping in to create space and options.

Watford, much like as a possession outfit, showcased a similar fluidity in their defending. They tended to mix between a flat, horizontally stretched 4-3-3 and 4-4-2 diamond setups.

Typically, it was a 4-3-3 when Neves dropped out of midfield. Against Wolves’ wide rotations, which saw the ball-sided central-midfielder, center-forward and wing-back all rotate positions, Watford’s matching numbers tracked the movements expertly to prevent any form or progression.

It then became a 4-4-2 diamond when Neves was in his given position. Up front, then, the two Watford strikers would press the center-backs closest to them. Watford’s pressure was far greater in these cases as the temporary back four deployed by Wolves afforded the deeper players time and space to recycle possession.

Set plays and counterattacks come to the fore

With both sides’ approaches in possession falling somewhat flat, it was hardly a surprise that the best chances manifested through set plays and counterattacks.

The first of these came in the thirty-fourth minute when Pereyra’s failed in-swinger was cleared away. Wolves’ midfield presence then enabled them to win the second ball. With Watford’s fullbacks supplying the width at this point, it left a two-versus-two – Jota and Jiménez against Mariappa and Cathcart. Jonny and Dendoncker got up in support as the pairings on either side stretched the central defenders before Jota drove inwards. Jiménez made a clever run through the middle to leave Dendoncker open, resulting in the Belgian squaring it to Jiménez for a tap-in. The lack of clean contact, however, saw the ball flick up into the air as Capoue made a goal-line clearance. 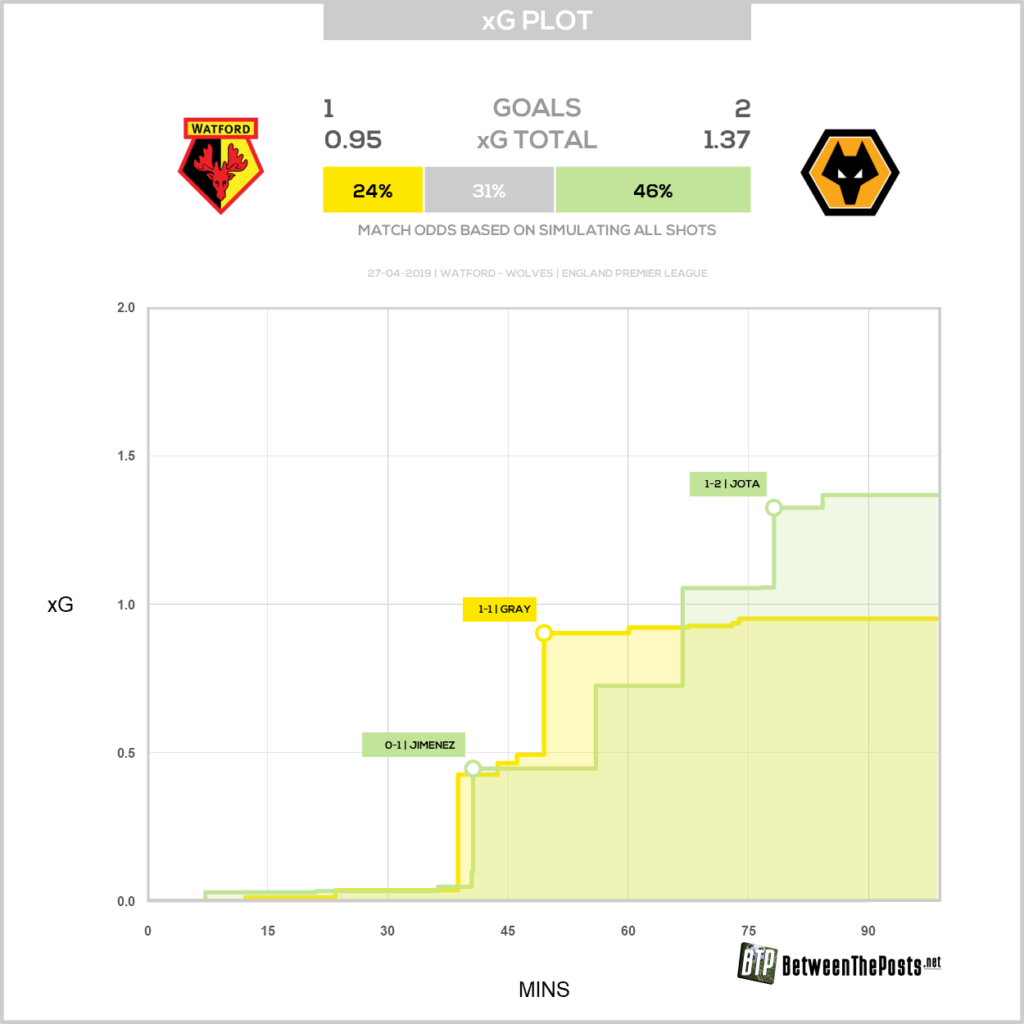 Watford had their turn at goal five minutes later as Holebas’ ball all the way over to the far-side found Pereyra, who brought it down and played it right back across. The pinball effect continued as Mariappa’s ensuing header was just another knock-on back the other way, finding Hughes, who glanced it over from close range.

Third time worked as a charm however, when Jiménez made the breakthrough for Wolves, two minutes after Watford’s best chance. In a less thought-out corner routine that was recycled over and over, Neves put a stop to Watford’s final attempts to counterattack and thus played it wide to Jota. The striker created some room for himself and whipped in a pinpoint cross onto the head of his strike partner to give the away side the lead, just before half-time.

Only three minutes after the restart, Watford levelled the game up. In very similar fashion to their first half possession sequences, they played short before quickly firing a direct ball into an attacker for a lay-off. The weight of the pass made it impossible to control but Watford’s attackers were quickly on hand to counterpress. After losing possession, a team immediately moves towards the ball as a unit to regain possession, or at least slow down the pace of the counterattack. In doing so, they forced Wolves backwards. Deulofeu had joined across and slightly ahead in support already meaning he was in the way when Ryan Bennett attempted a limp back-pass to Rui Patrício. Having intercepted the ball, Deulofeu unsuccessfully rounded the goalkeeper but Gray picked up the pieces and fired in the loose ball. Tie game five minutes after the break. 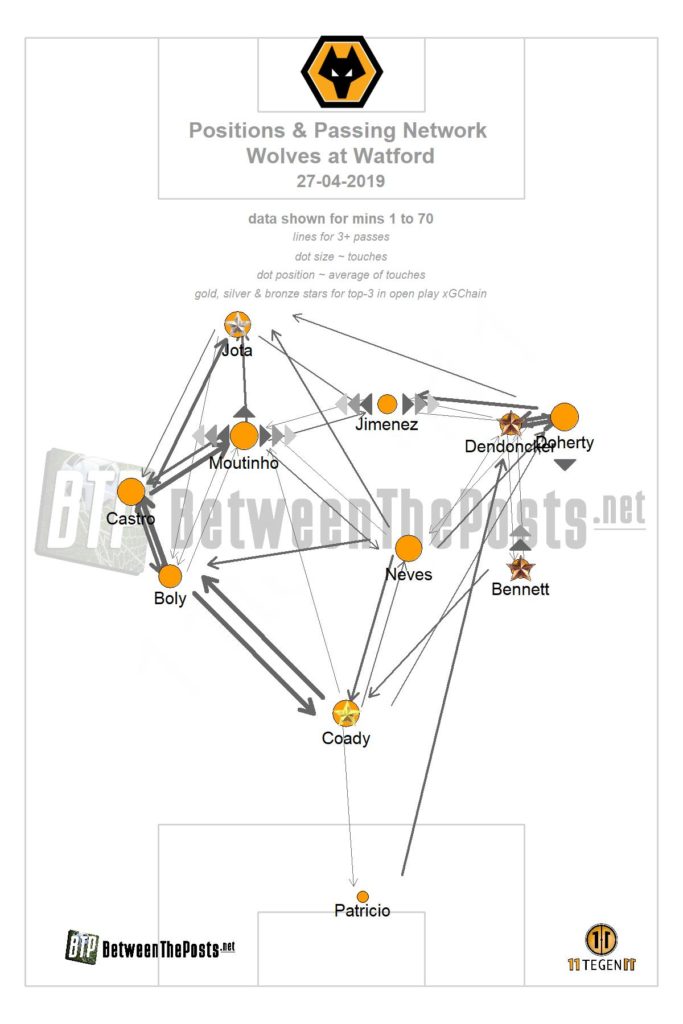 The game settled in its old pattern after the equalizer. There were more promising moves from Watford, but every time they combined to create an attacking opening, they had nobody to stretch play by being a far-sided presence. Wolves kept their shape intact comfortably that way, and space for attacks was denied time and time again.

Gracia did make one change, potentially with this issue in mind, as Christian Kabasele came on for Hughes to utilize a back three instead. Watford now played in a 3-5-1-1 formation, in most cases with Abdoulaye Doucouré providing more offensive presence. Similar principles remained, but the structure was stricter, like Wolves, hoping they could spread their play more evenly.

Despite their best efforts and some steady possession spells, it was not long before Wolves spoiled the party. As the away side played back and around, Watford’s 5-3-2 shape meant they were not readily covering the width of the back-line. So, when Neves peeled wide right, it was easy to get it quickly across. The midfielder’s subsequent, looping cross flew past Ben Foster – huge mistake by England’s former goalkeeper – and instead found Jota for a simple tap-in.

Gracia had to revert to a more attacking shape quickly after, as there were only fifteen minutes left to play. In the remainder of the match, Nuno’s side did a good enough job at breaking up the play to see off their competitors in a game Wolves, overall, just about edged.

Wins now against Arsenal and now at Watford mean it has been a great week for Nuno’s side in their push for the final European spot. With three matches to go, they have three points in hand over closest competitor Leicester City. Barring more misery at the hands of Watford – who could potentially beat Manchester City in the FA Cup final and claim qualification irrespective of their league finish – they will probably finish seventh. Knowing their off-the-field gravitas and strong transfer policy in general, it will be hugely interesting to follow their summer transfer window and next season. Is a top six finish possible next time around? A deep Europa League run perhaps? 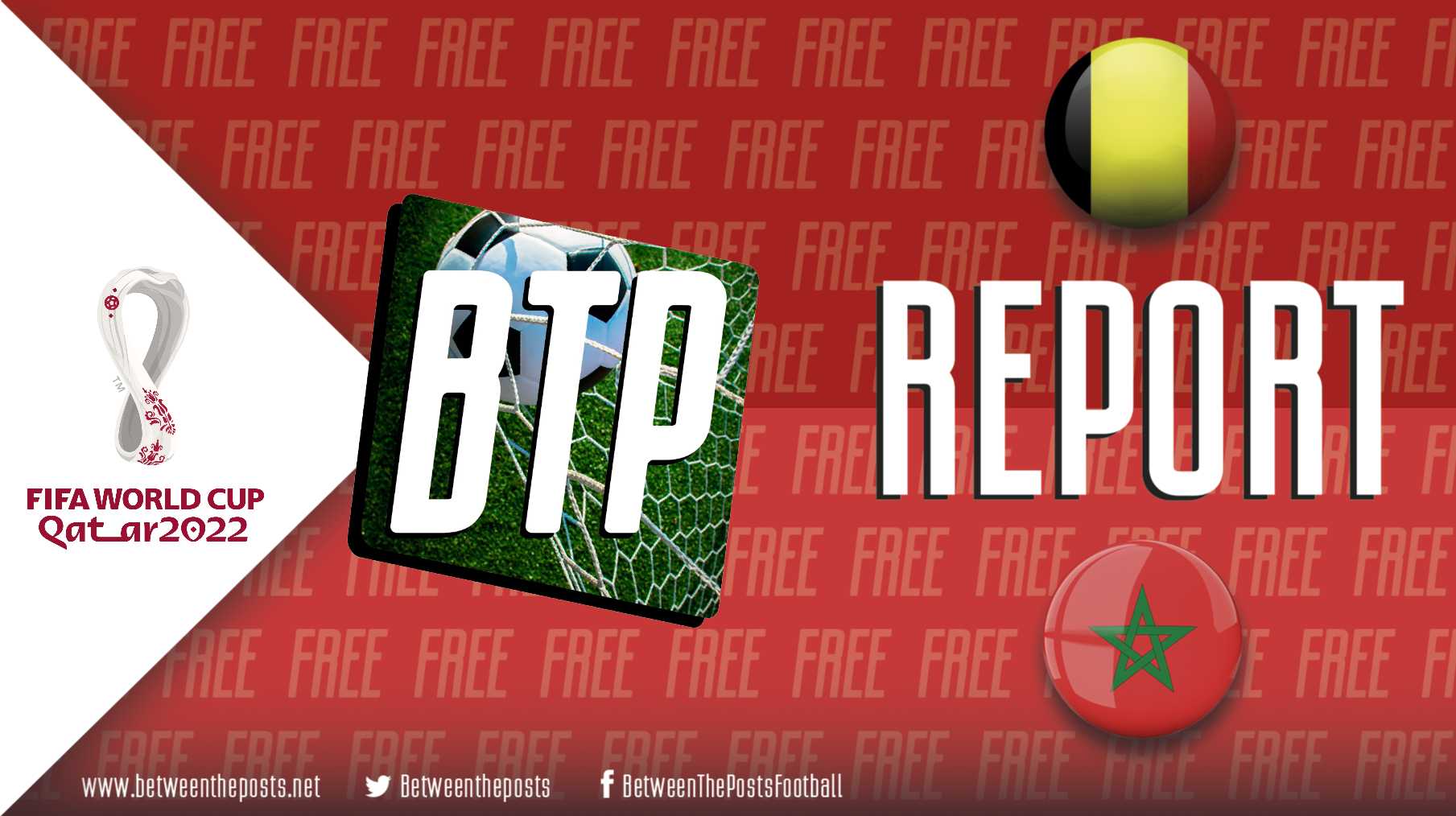 Belgium – Morocco: Belgium Have No Answers To Morocco’s Organized Setup (0-2)