Manchester United were superior for the majority of the game, even when they were a man down. Still, Wolves ran away with a 2-1 win, which definitely flattered Nuno Espírito Santo. Solksjær’s United put up a much better performance against Wolves compared to their recent clash in the FA Cup quarter final, but the new manager was let down by two big individual errors and a series of squandered chances.

In his second game after being announced as United’s permanent manager, Solksjær showed his reactive tactical prowess, despite losing the game. His opposition analysis and starting tactics were spot on, and he reacted brilliantly to a red card to keep his side on top.

After fielding a 4-4-2 diamond formation against Wolves in their previous FA Cup encounter, Solksjær opted for a 3-5-1-1 structure this time to match his opponent’s shape. United’s lineup had six changes from their unconvincing win against Watford in the weekend. Ashley Young started in an unfamiliar right center-back position alongside Chris Smalling and Victor Lindelöf. Fred was deployed as a regista in front of the back three, with Paul Pogba and Scott McTominay ahead of him with more offensive roles. Jesse Lingard played off Romelu Lukaku in a roaming role.

Nuno Espirito fielded his strongest side despite having an FA cup semi-final with Watford on Sunday, with the only exception being Ruben Vinagre in place of Jonny Otto in the left wing-back position. Wolves were in their accustomed 3-5-2 shape.

United learned their lessons from the FA Cup quarter final loss. Wolves’ 5-3-2 medium block A medium block refers to a team that retreats in their own half out of possession, generally only disrupting their opponents some way into their own half. structure is very hard to surpass through the middle, and here Solksjær planned a direct approach to make his way into the final third, using Romelu Lukaku. Despite ending up as the antagonist with the sending off, Ashley Young’s right center-back role was a key part of United’s buildup approach.

Having a 3-1 buildup structure that could comfortably pass around the Diogo Jota – Raul Jimenez duo, Young stayed wider towards the right in possession and he was the designated player to play searching balls towards Lukaku, which triggered Dalot, McTominay and Lingard to attack the second ball. This was a recurring theme, as Young played six balls towards Lukaku in the first half, with two of these moves ending up as clear cut chances in the early stages. 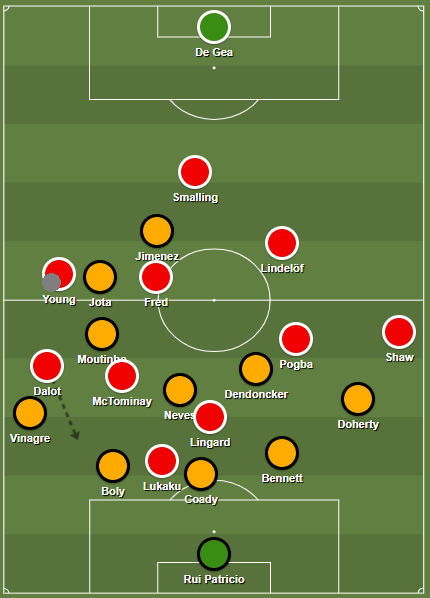 Fifth minute – Young plays a long ball to Lukaku, Dalot, Lingard and McTominay crowd the area for the second ball. McTominay receives, play continues in the final third and ends as a clear cut chance for Lukaku from a Dalot cross.

After getting the ball to the final third through direct balls, United would face a wall of Wolves defenders pinned back to their box. This made their main threats consist of quick switches of play to the wing-backs and crosses. Dalot set up Lukaku for a golden chance in the fifth minute, in the move described in the diagram. United found the opener through McTominay, who made great use of the wet surface with a low driven shot that went through the packed Wolves defense.

It is fair to say that United’s starting tactics were spot on, as Wolves did not even get near United’s goal, United was 1-0 up and missed three clear opportunities. They had a well worked path to progress the ball as Young was rarely under pressure to play those balls, they won the second balls, and without possession they did well to deny Wolves any space. 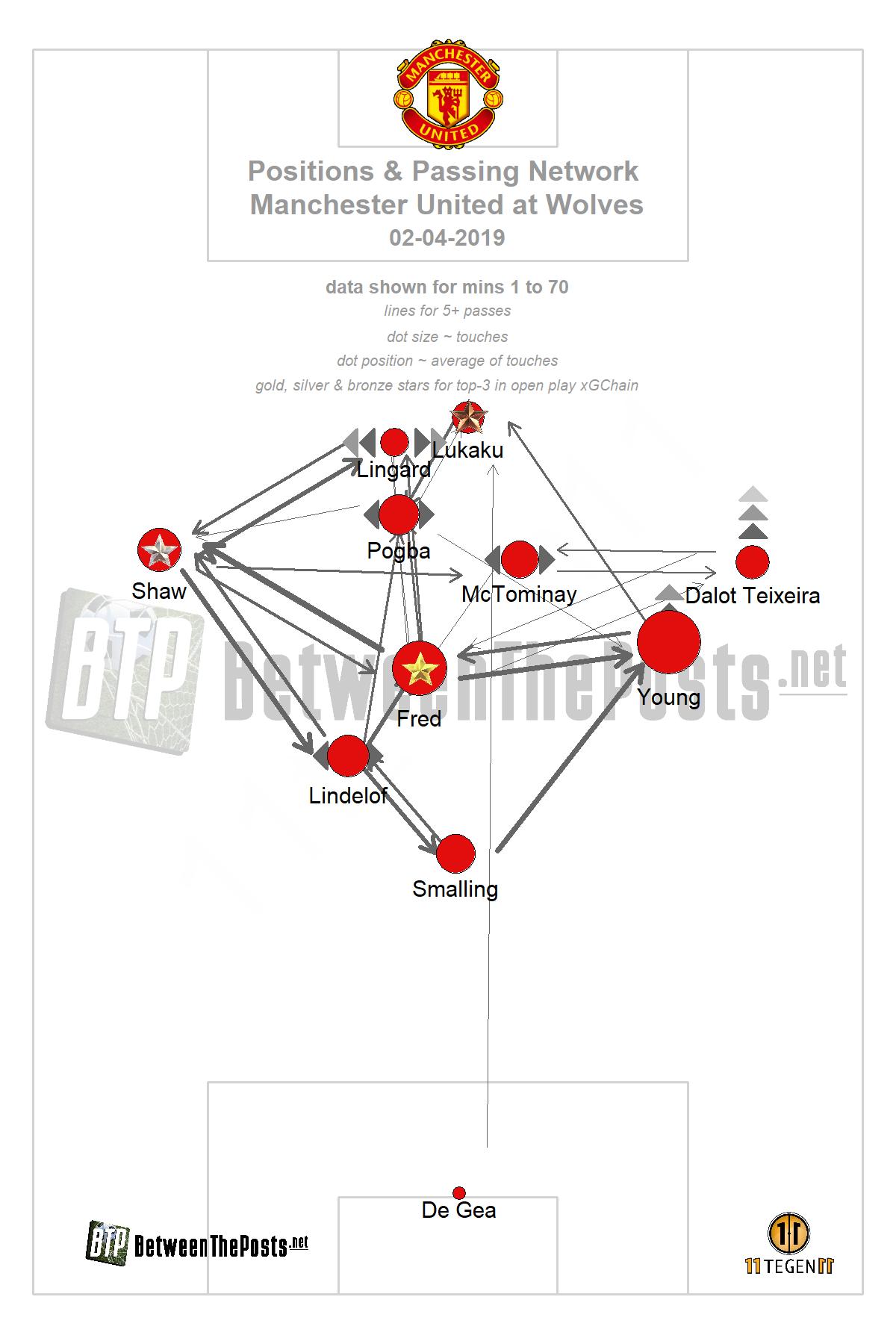 Note the important roles for Young and Fred in Manchester United’s passmap.

Identical roles and threat of Dendoncker and McTominay

Leander Dendoncker and Scott McTominay played identical roles for their respective teams – both players are tall, physical midfielders who have a no-nonsense passing play with limited talent. Both were used in a box-to-box midfield role by their managers, often surging forward to occupy a center-back and make numbers in the box. Since both teams often used the wings and had numerical superiority against their opponents’ forwards in the middle of the field, it was fitting that the game’s best chances fell to the late runs of these two players.

Completely against the run of play, Wolves equalized thanks to a Fred error in the 25th minute. Fred had the role of regista in this game as a playmaker in front of the back three, and with his fast progression of the ball and quick turns he actually had a decent game, except for the error, which illustrated that his role on the night cannot handle poor first touches. He made a terrible first touch on a De Gea pass and lost the ball, the deadly duo of Jimenez – Jota combined beautifully to equalize in the game’s first chance for Wolves.

Wolves suddenly found confidence and started using the ball much better, as we often see them do, progressing the ball better to the final third and missing one good chance with Doherty finding Dendoncker in the box who arrived with a late run. Solksjær reacted by switching Pogba and McTominay’s positions around the 34th minute, which gave Wolves’ left side a different profile of player to worry about, especially since United was using Young’s long balls through there. United balanced the game again with this slight tweak and had a good chance from Pogba and Lukaku combining in the right half-space in the injury time of the first half.

United started the second half like they did the first – they were completely dominant again and asked good questions of the Wolves’ defense. Pogba started as the right central midfielder like he ended the first half, more involved in ball progression. McTominay missed a golden chance with a header in the 55th minute, before yet another individual error caused another blow to United. A sloppy pass by McTominay led to Young missing his reach towards the ball and clattering Jota to receive his second yellow card. Young’s first yellow card had already been unnecessary, and it came back to haunt him. 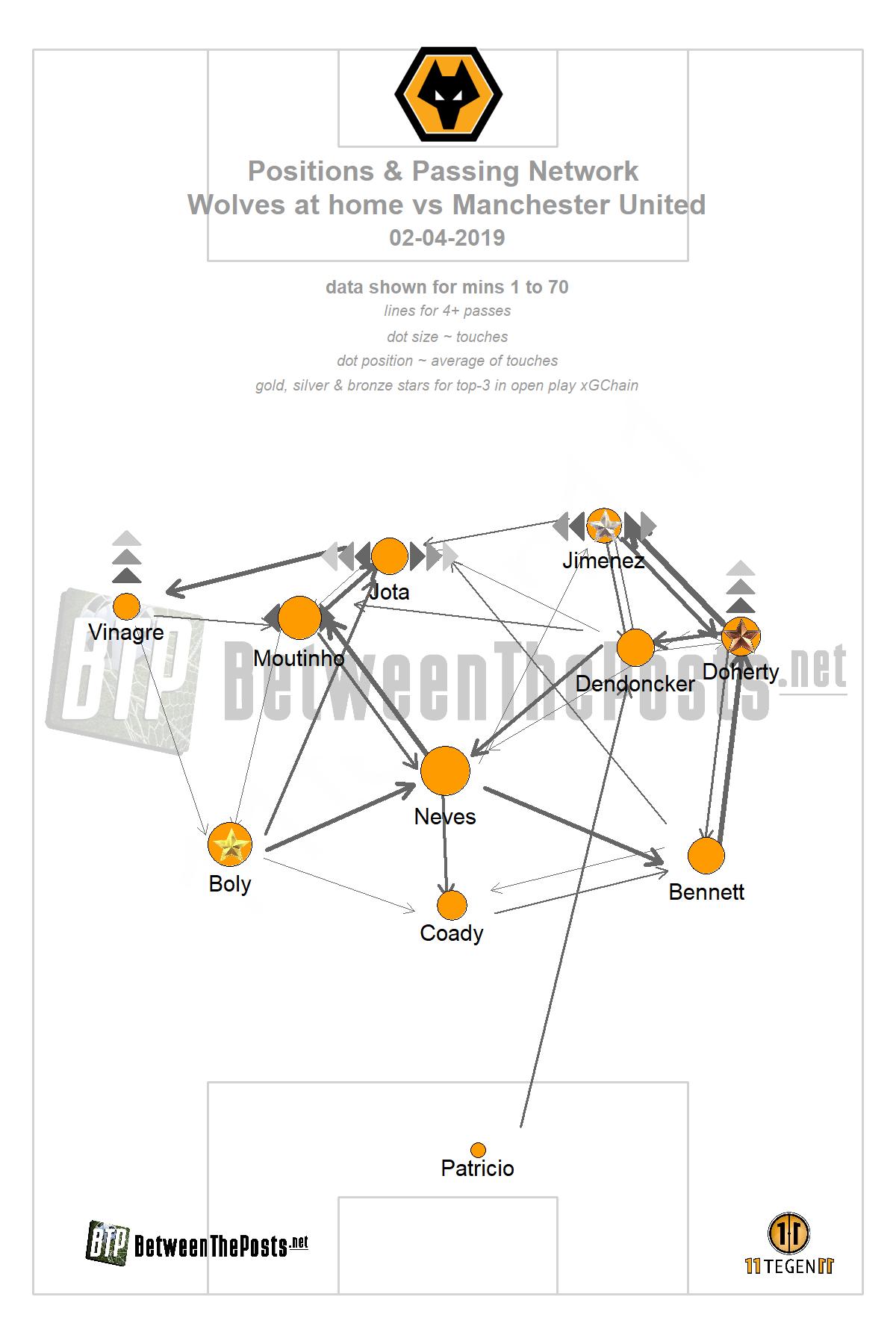 Wolves’ trademark 3-5-2 formation is well reflected in their passmap.

After the red card, United played a 4-4-1 diamond formation for eight minutes. Wolves increased their intensity and the vertical running of Dendoncker and Doherty were drawing defenders out of position. Solksjær reacted by bringing Jones on for Fred, turning his side into a 3-5-1 shape. McTominay became the defensive midfielder with Pogba and Lingard in front of him.

This made perfect sense in all aspects – the defensive organization and the player orientations stayed the same, just with one less player up front. United completely balanced the game again after this switch and arguably looked the better side in this period. More substitutions came shortly after, with both managers going for straight swaps – Cavaleiro for Jota, Martial for Lukaku, Jonny for Vinagre.

Wolves’ winner came in the 76th minute, once again against the run of play. In one of their rare moments in this game where they attacked well-organized with numbers, they had a player to occupy every player in United box and a brilliant cross by Moutinho landed on Jimenez’s head, who mishit it but the scramble ended up as a Smalling own goal. Once again, it was Dendoncker who was involved in the start of the move with a pass to Neves, burst into the box and attacked the rebound to force Smalling into the own goal. His forward runs were key in Wolves creating anything against this back three of United. 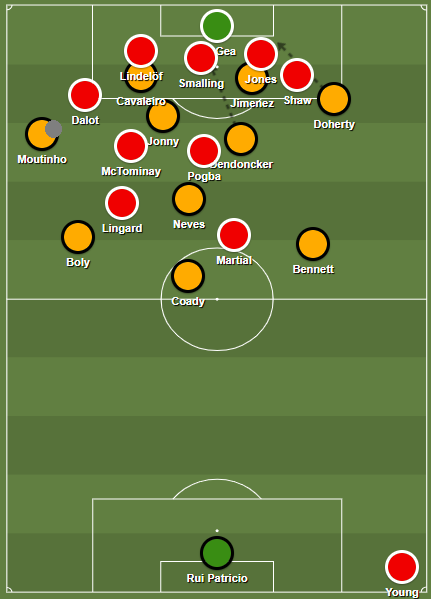 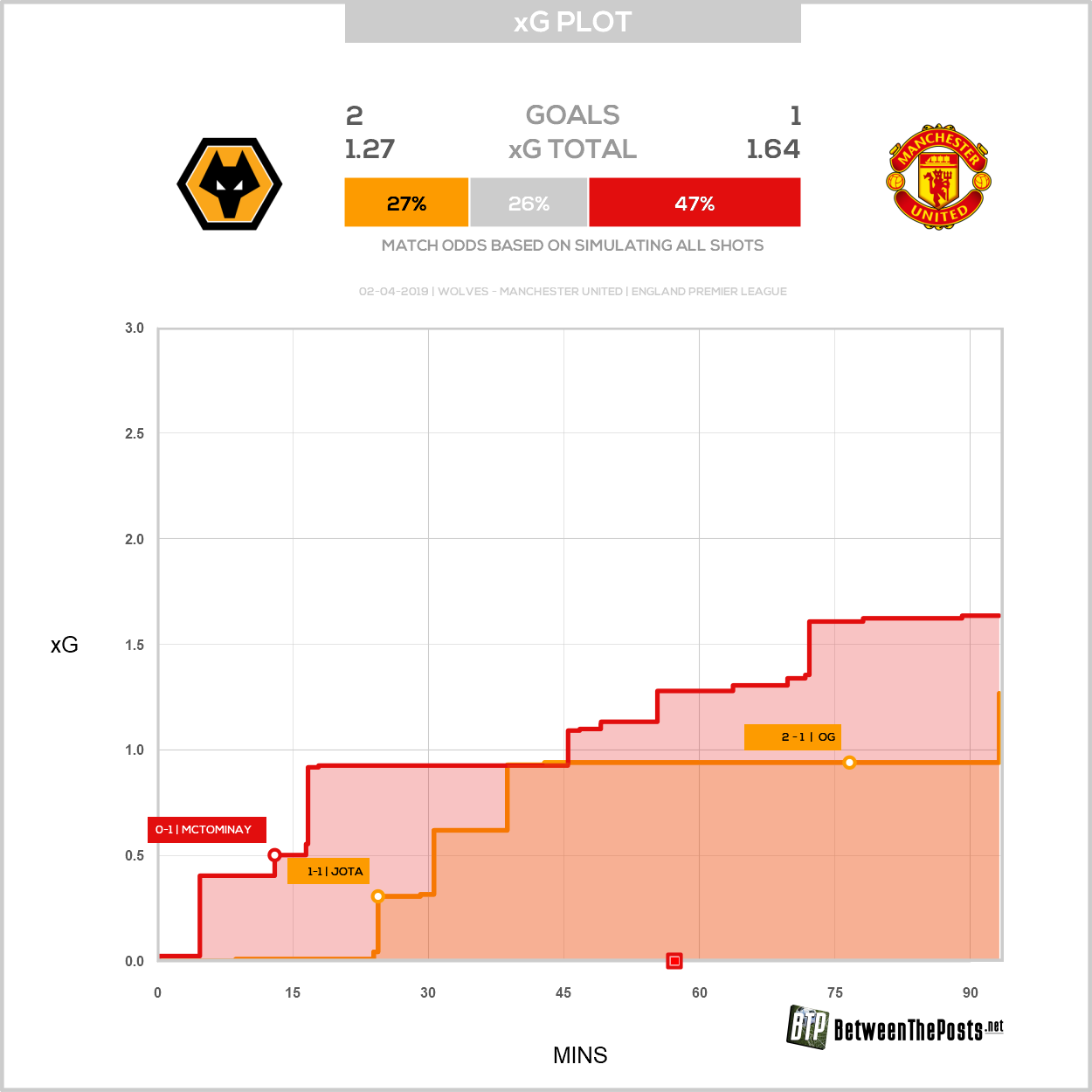 Manchester United can consider themselves really unlucky here, and anyone that is still evaluating if Solksjær has what it takes can note this game down as a big plus. The Norwegian did everything he could from the start to finish to get the best out of his weakened lineup against an excellent side, but he was let down by two key individual errors. Especially the ten men switch of tactics into a back three was brilliant and kept his side in control of the game despite numerical disadvantage. To put things into perspective, Wolves did not have a single shot in the second half until Jimenez’s failed header for the goal in the 76th minute.

This season, only four teams fielded a back three against Wolves. Wolves lost 2-0 home to Huddersfield, lost 2-1 away to Cardiff, won 2-1 away in Newcastle (Newcastle got a red early second half), won 2-0 home against Bournemouth and drew 1-1 home against Newcastle in these games. Nuno Espirito Santo’s team are more and more becoming a team to beat, and in their second season they might encounter more teams that play with a back three to cause them trouble, as we saw with Chelsea in Antonio Conte’s second season. Nuno Espirito Santo might need to find some alternative solutions to offer more offensively against this setup. 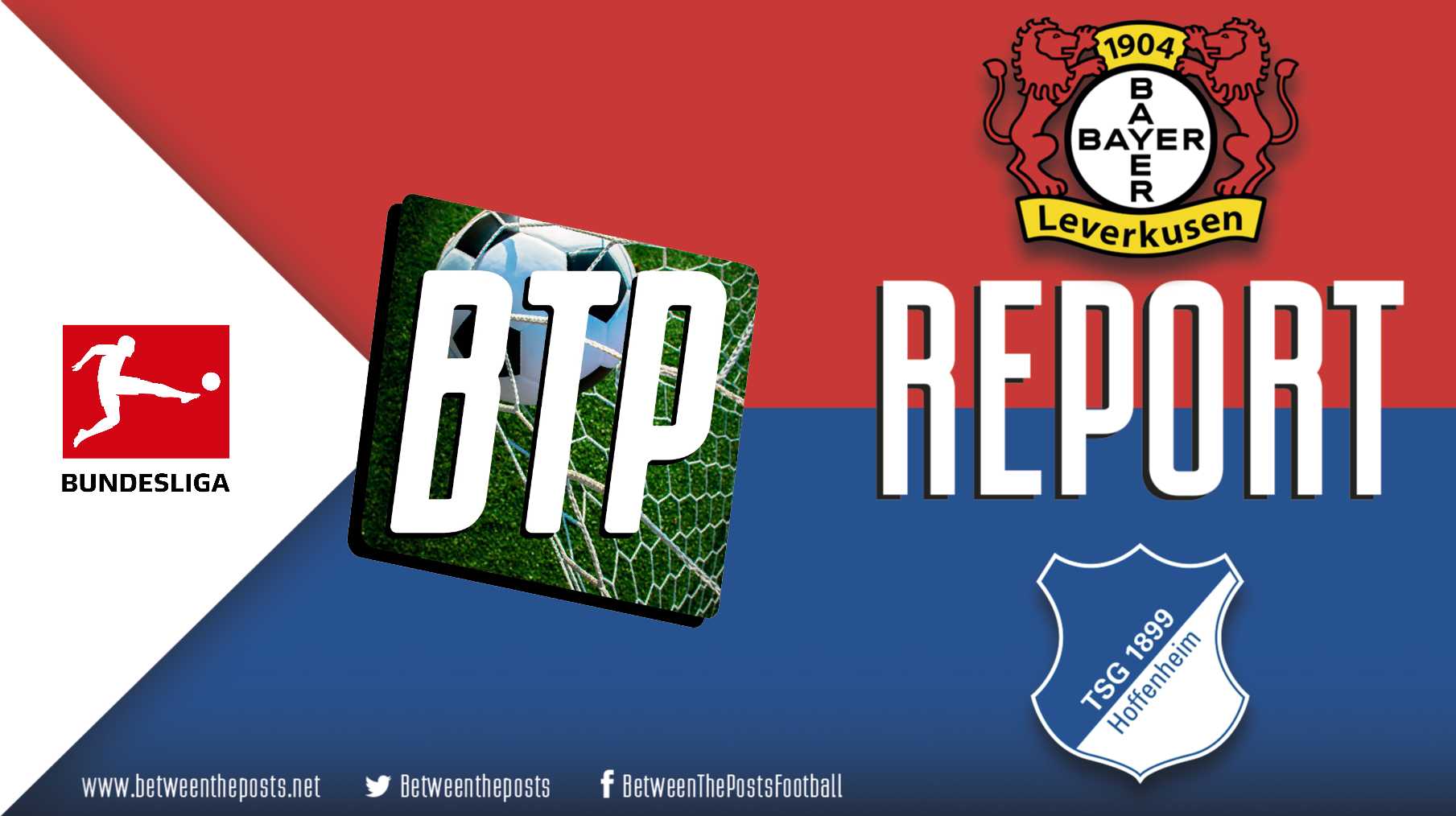