Behold the Premier League’s greatest rivalry. Football is nothing like it was twenty years ago and neither are these two teams. But chaotic defending, errors and refereeing decisions always offer fun. Though not on top form, Arsenal was still superior to their opponents in turmoil.

Ambitions between one of English football’s great games have been massively skewed by the decline of both of these clubs. Three points may separate them, but the gap is not large enough to reflect one club’s situation being a lot healthier than the other.

Arsenal had lost control of the fourth spot after three consecutive defeats, but an excellent defensive display, followed by some neat transitions forward, saw Arteta’s team claim a huge 4-2 victory away to Chelsea. This team is still raw but has required some of the finest young offensive talents the league has to offer, combined with a manager who is showing a bit more tactical nous to his blueprint.

Whereas Arsenal shows more signs of recovery, Manchester United show more signs of decline. Years of mismanagement and structureless planning have turned a club almost unfixable: one which took another battering from a club that reflects the complete opposite in midweek. Ralf Rangnick described the task as an “open heart operation” for incoming manager Erik ten Hag, set to take over at the end of the season.

Eddie Nketiah kept his place in the striker position, having scored twice in that away win at Stamford Bridge. Arteta’s only change, to that same team, came in the defense, as Rob Holding was replaced by Cédric Soares, Ben White moved back next to Gabriel Magalhães in the center-back spots.

Rangnick made five changes, which saw United move back to the 4-2-3-1 formation. Raphaël Varane returned to the defense, with both Harry Maguire and Phil Jones dropping out. Alex Telles returned to left-back, whilst Scott McTominay and Jadon Sancho also came in. Cristiano Ronaldo started upfront.

Arsenal’s blend between a 4-2-3-1/4-3-3 shape soon took control of the ball and aimed to put the ball behind Man United’s wingers, who sat in a 4-4-1-1 medium block. Within the first few moments, Arsenal put themselves in the lead.

Granit Xhaka switched the ball twice, but Man United was able to deal with the first phase of the attack until Xhaka attempted another ball towards the back post. Dreadful handling between Varane and Telles led to the ball bouncing to Bukayo Saka, his shot well saved by David De Gea, but tapped in by Nuno Tavares at the back post.

The hosts continued to control possession, but their phases on the ball were heavily inconsistent when building from the back. Although expansive, White and Gabriel’s wide split led to both Mohamed Elneny and Xhaka dropping closer to the goalkeeper and Arsenal being static when the tempo had slowed. Soares remained closer to the center-backs than Tavares, who pushed higher, but Soares did not offer much flexibility or contributed much to the buildup phase when in possession. 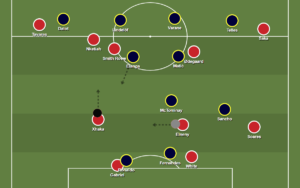 Nevertheless, despite Arsenal being very basic when moving the ball out, they were bailed out by Saka pinning high and Martin Ødegaard dropping into the space behind Jadon Sancho. They were also met by a high Man United set-up which didn’t know what to aim for.

The forwards didn’t press, only reacting to the pass, rather than preventing such progress from being made. Bruno Fernandes awkwardly stepped forward to join Ronaldo in pressing the center-backs, but the midfielders often failed to cover. This led to Scott McTominay pushing higher against the double pivot, whilst Anthony Elanga stayed deep to cover Tavares.

Upon entering the opposition half, Arsenal still looked u-shaped in possession and reliant on interchanges between Saka and Ødegaard. Xhaka and Elneny still worked in proximity to each other, with fullbacks that offered very little to the final third product. On the right, Soares remained deeper without the center-back positions being altered and still not contributing much to the buildup phase. Down the left, Smith Rowe operated in the halfspaces but there was a lot less dynamism between himself and Tavares, compared to the right side.

As a result, Arsenal attacks were disconnected and United was able to create from a few counterattacks. These attacks were often constructed by Ronaldo peeling off the center-backs to receive deeper, anchored by Elanga making runs in behind from the right. In these moments, Arsenal’s defensive line could be distorted easily and it lead to Elanga getting in behind twice in the opening stages, the first attempt was saved by Aaron Ramsdale, and the second failed to end up in a shot after Elanga lost balance from Tavares pressure. 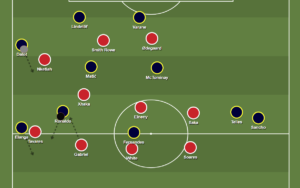 14th minute: Buildup to Elanga chance (First pass, grey ball: second pass, black ball.) Some positions altered in this particular phase – Nketiah on the left, Matić towards the ball – but far too much space afforded on the left of Arsenal’s block enabled Ronaldo to peel off to the right and create space for Elanga.

Sporadic shots have been a common theme between these two teams and fortunately, we were inbound for another game like it. Man United continued to form attacks on the right, able to gain chances in the second phase by Arteta’s team continuously bunching rather than drifting when the ball was moved laterally. This led to Diogo Dalot’s shot, from outside the area, smacking the top of the crossbar.

Nevertheless, Arsenal continued to cause danger, mostly from poor United pressing moments that lead to their midfield being so open. Though the attack slowed, a weak touch from McTominay gave Arsenal another bite as a crisp Ødegaard pass slipped Nketiah through, a shot which was saved by De Gea.

Arsenal grabbed the second shortly after, but it wasn’t without some confusion. Once again, Arteta’s team flowed play through after some poor transitioning, between United pressing and dropping off. Saka cut inside, combined with Ødegaard, who delivered another fantastic ball from a similar area. Saka’s touch was finished by Nketiah in an offside position, but the challenge from Telles on Saka was deemed a foul and Saka converted from the spot after a lengthy VAR review. 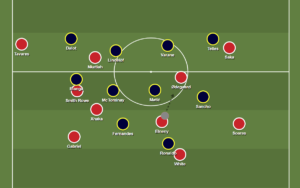 26th minute: Buildup to Nketiah offside goal/penalty awarded for Arsenal. Arteta’s team were able to turn buildup into attacks quickly once Ødegaard was found behind the midfield line. Poor spacing and disorganization in the United block lead to defenders dropping off, rather than any counterpress and compactness to form.

Just two minutes later, United pulled a goal back, after Arsenal failed to deal with the Ronaldo outball and allowed the visitors to create in the second phase. Neat touches from Sancho lead to the Arsenal block being bunched and made space for Nemanja Matić to cross. Ronaldo easily slipped between Gabriel and Tavares, whilst Ramsdale hesitated and stumbled. An easy finish for the striker to bag his 100th Premier League goal.

United gain some ball to no avail

Arsenal would continue their lopsided dominance into the second period, but United would start to gain more of the ball in the second period, after wild attempts from Tavares and Saka. The game started to slow down a lot, after this point. After both teams racked up eleven shots apiece in the first period, just four shots were taken between both Arsenal and Man United after fifty-five minutes.

As well as looking lost off the ball, United was not as promising on it. However, they were given a golden opportunity to equalize, after being awarded a penalty for a handball. Fernandes stepped up, and in Simone Zaza fashion, his slow shuffle towards the ball would not result in the desired outcome: the shot bouncing wide, off the foot of the post.

United kept their shooting momentum on the right side, through shots from Elanga and Dalot that forced good saves from Ramsdale. This stemmed from mistimed pressure from the Arsenal block, which gave Matić space to find Telles and Dalot’s overlap round Ronaldo created the shooting opportunity, which smacked the post after Ramsdale’s save.

From this point, both teams failed to form major attacking opportunities. United’s dysfunctional shape lead to passes from Matić being the only source of progression as their four forwards fell into the last line and contributed very little. Rangnick’s team passed the ball outwards, for attacks to die.

Arsenal would soon kill the game off, with twenty minutes left. Having transitioned the ball forwards, it was Ødegaard into Saka which gave them access to the box, once again. Telles cleared, but a dreadful touch from Fernandes allowed Elneny to keep the attack alive. Xhaka took a touch and fired the ball in from range, a vintage blast from a defensive midfielder, that had enough of his attackers’ attempts.

This would be the final attempt that either team would register. Saka would be forced off due to injury, which saw Rob Holding come on and Arteta’s team rotate into a 3-4-3 formation. Rangnick’s substitutions were more unusual, as Matić was replaced by Rashford and Elanga came off for Lingard, which saw United in a 4-1-4-1 formation for a brief period until Juan Mata came on.

This is what Barclays has always been about. Chaotic fun, with dreadful defending throughout, in which case, neither team covered themselves in glory. Despite that, it is a significant result for Arsenal, in pursuit of the fourth spot. With an away trip to Tottenham still on the cards, it is impossible to choose between either club to make a Champions League return.

That being said, all hope of United keeping their spot has well and truly gone. It reflects a terrible mood around the club, one in which has never looked so detached from an identity. It is a huge task, but with a decent crop of young players still involved, it is not an impossible one. 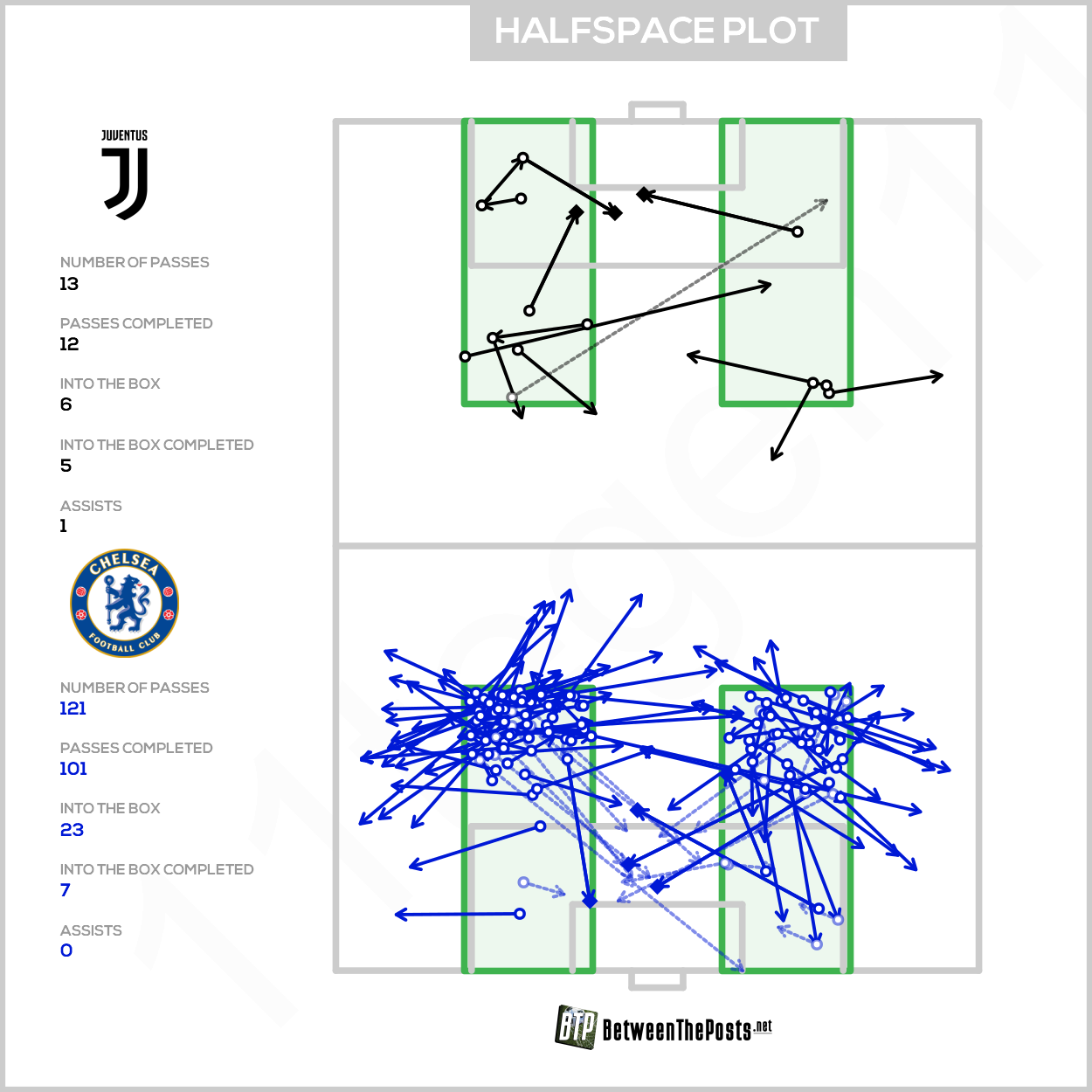 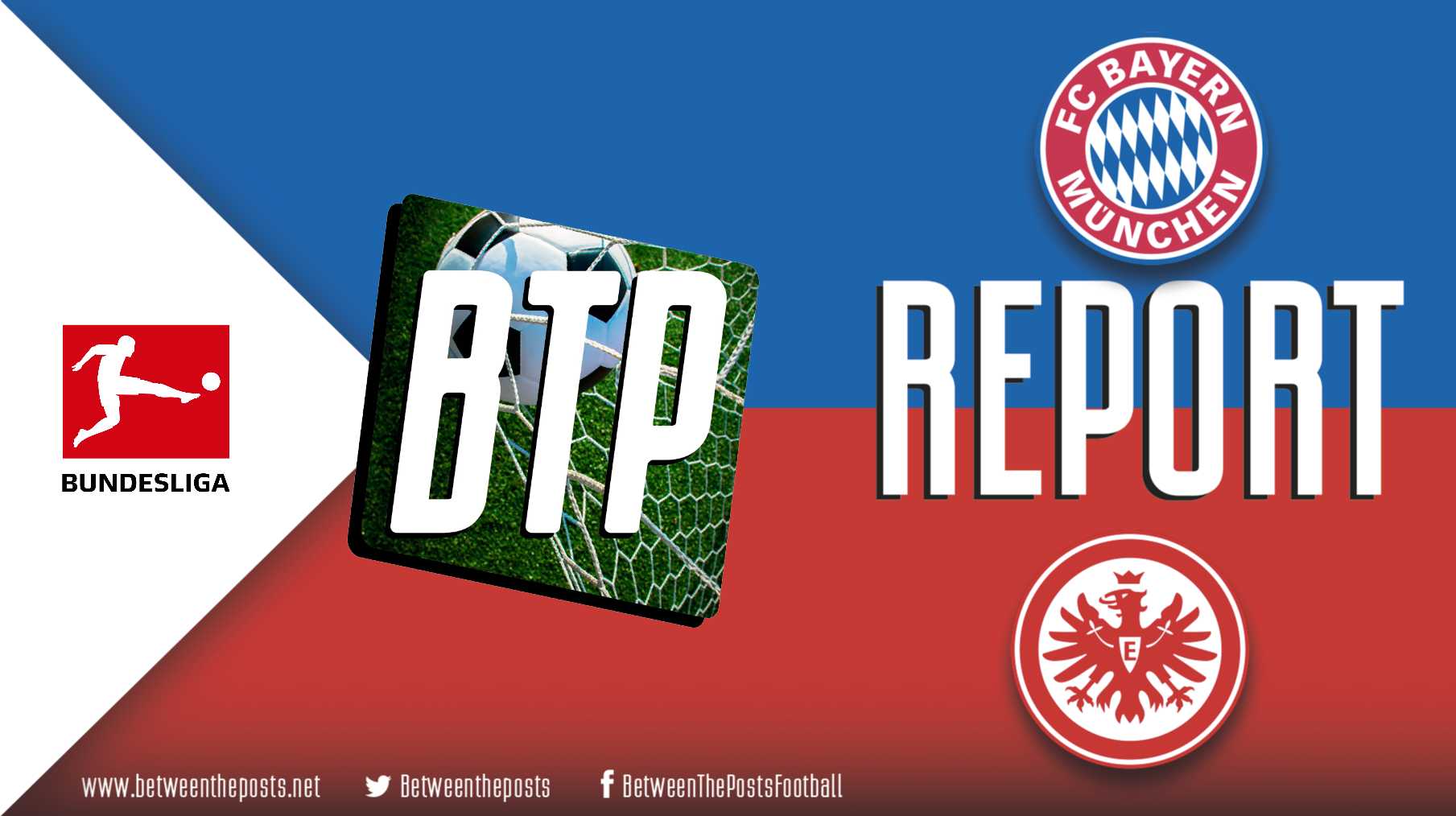