Barcelona – Internazionale: The Blaugrana Are Back On The Brink Of Their Death Knell (3-3)

The ‘Group of Death’ reunited two giants of the European game in a contest whose second half was one for the ages. An exhibition with six goals aligned with Xavi’s risks that befitted the big stage, but even his staunchest backers could struggle to bear the consequences of the outcome.

Pride comes before a fall. Barcelona have flaunted all sense of decency in their pursuit of former successes from the turn of the 2010s. So how fitting that twelve years after Inter’s historic 1-0 loss at Camp Nou, the stadium might be setting the stage for another Italian job to set back the Catalans.

Debt has merely emboldened Barcelona to test the limits of financial regulation. A final outlay of 158 million euros has added to the depth of talent in the squad. There is, of course, a catch. With great power comes great responsibility. A LaLiga title is one matter, but now more than ever, demand is high to deliver in the Champions League. A return to the Europa League is not a feasible outcome.

The ‘Group of Death’ has had other ideas. Inter dented their hosts’ prospects with a 1-0 win at the San Siro last week to compound Barcelona’s 2-0 loss in Munich. This disciplined display was a relief for Simone Inzaghi, whose team have been erratic. Six points off the summit in Serie A, their troubling form has flitted between five victories and four defeats in their opening nine league games. Adding to their group points tally in this outing would hand the manager more time to restore order in his post.

Inzaghi picked nearly the same group that repaid his faith eight days ago. Samir Handanović is still the club captain, but he has lost his spot to summer signing André Onana. Hakan Çalhanoğlu filled in again for Marcelo Brozović, and Henrikh Mkhitaryan stood to his right. Elsewhere, Denzel Dumfries was back in the fold as a right wing-back, while Edin Džeko joined Lautaro Martínez in the front two.

The same principle was at play for Xavi. The Barcelona manager placed Gerard Piqué next to Eric García at the heart of the back four, in which Marcos Alonso and Sergi Roberto were the fullbacks. The trusted trident of Sergio Busquets, Pedri, and Gavi stayed in the middle of the park. In the same way, Raphinha, Robert Lewandowski, and Ousmane Dembélé were part of a familiar front three.

The strategic dynamic of this fixture was clear. Bayern Munich, sitting at the top of Group C, were easing towards another three points away to Viktoria Plzen. A loss would rule the hosts out of the running for a spot in the top two, while a stalemate would push them perilously close to third place. What’s more, Inter had been content to sit off in their half of the pitch in a 5-3-2 block for most of the match at the San Siro. This tactical alignment forced Xavi all the more to unearth more firepower.

From kickoff, Xavi had settled on a new shape. On the ball, Roberto moved into the right halfspace to function as a central midfielder from the right of the back four, swapping a 3-2-4-1 structure for a 3-1-3-3 formation. Gavi was on the left of this diamond, and Pedri was at its tip, far higher up the field. 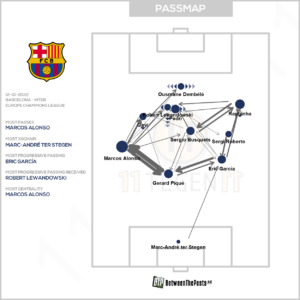 Inzaghi’s men sat off again in a 5-3-2 block, waiting to engage behind the halfway line. They now faced the same setup that dominated them against Bayern Munich, running into a familiar wall. 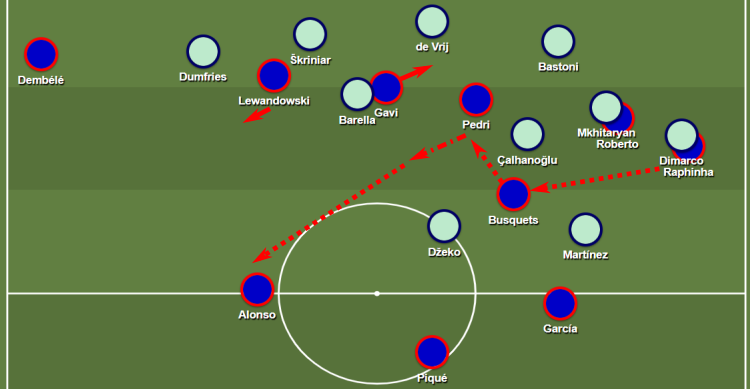 10th minute: offensive sequence from Barcelona. Raphinha’s deep width lures out Dimarco from the back five. Mkhitaryan shadows Roberto, opening the inward passing lane to Busquets. Pedri moves to the right of Çalhanoğlu, offering a secondary switching option to find Alonso on the opposite side of the pitch. Notice the opposite movements of Gavi and Lewandowski, forcing Barella to cover deeper and creating access to the striker in the left halfspace since Dembélé’s threat of depth pins Dumfries.

As did the Bavarians, the hosts formed a diamond at the base of their buildup. If Inter’s forwards were too wide, they would open a passing lane to the midfielder. If the pair were too narrow, pressure on Alonso and García was weak. This balance of covering tasks became harder once the visitors began accounting for the forwards. Dropping movements in front of a loaded back five pinned Çalhanoğlu, who jumped to close down Busquets from midfield. If the strikers did not fall back, vertical switches in position paved the way for Gavi to roam into the final third with the ball at his feet in the halfspace.

Pedri took on a range of tasks near the box. On the left, he often drifted diagonally to the center if Gavi moved outward to evade Nicolò Barella. This interaction, along with the brief linkup plays of Lewandowski, worked to overload Inter’s active right sided defense. On the other hand, the space inside Dimarco was the target of deep balls on the right. The attacking midfielder sprinted freely into these gaps before the break, but Roberto profited most of all. In the 40th minute, the right back read a lateral pass from Raphinha, slipped into the blindside of Mkhitaryan, and teed up Dembélé. 1-0.

Vulnerabilities at the back come to light

If Barcelona’s wide defenders sought to bring narrowness to aspects of the attack, the approach of Inter could not be any more different. As was the case in the reverse fixture, their buildup structure and patterns wielded many tools. The width and depth of their two wing-backs, advances from Çalhanoğlu, and hold-up play of their front two stretched the home team’s man-oriented 4-4-2 block.

Here, attention was on Barcelona’s center-backs as a point of weakness as Ronald Araújo and Andreas Christensen were missing. The pair duly validated concerns. Piqué was a few meters further back than the rest of the backline in the 50th minute, inviting Barella to elude the offside line and exploit the error. If Camp Nou was full of angst, the next quarter of an hour did little to calm the rising tension.

More constant transitional circumstances revealed problems defending in open room, and Martínez soon pounced. He took down a switch from Çalhanoğlu on his chest, shifted inside García, and cracked home a strike off the post. Now the Catalans were mired in a crisis and required a riposte.

A feverish and frustrating finish

Before the restart, Xavi put on his first two substitutes. Frenkie de Jong sat at the base of the midfield in place of veteran Busquets. Ahead of him, Dembélé had moved over to the opposite flank as a right winger, and Ansu Fati replaced Raphinha, operating to the left of Lewandowski. Asserting his desperation, the manager later took off Roberto, bringing on Franck Kessié. At this point of the match, the visitors were willing to camp around their penalty area. Inzaghi trusted Martínez as the lone striker on the field from the 76th minute, bringing on wing-back Raoul Bellanova for Džeko.

The last ten minutes of this taut duel were thrilling. Lewandowski presented himself as a source of hope, turning the ball goalward past Onana. Still yearning for an extra goal, Xavi swapped Gavi with Ferran Torres, but the Italians were no pushovers. Two minutes of the allotted time remained when Martínez capped a stellar display. He waited for teammates to pour forward, then astutely broke the lines to set up Robin Gosens to bag his side’s third goal. Lewandowski immediately responded. A headed effort in injury time earned Barcelona a point, but the final whistle signaled disappointment.

Xavi: “I’m sad and angry. I apologize because it’s everyone’s mistake, we had put it into our heads not to fail, but we did”. 🔵🔴 #FCB

“We tell Barça fans that we will work to turn the table around and win titles”. pic.twitter.com/KSXk8OxScz

Barcelona are still alive in the Champions League — by the skin of their teeth. An inferior head to head record against Inter renders their last two fixtures ‘finals’ they must win to get into the Round of 16. As the Europa League beckons, this outcome has brought their weaknesses to the fore. If a lack of tempo was costly at the San Siro, the absence of control in transition proved to be their undoing here. This state of affairs emphasizes how quality alone is not enough, and Xavi has questions to answer.

Inter Milan will lament the ending of a clash in which they should have killed Barcelona’s aspirations. However, they will also be the heartier of the two contestants. Amid an inconsistent vein of form, they cashed in on the frailties of their opponent to deliver a pair of results that ought to inspire a revival of their fortunes. Returning to the summit in Serie A would be no mean fate, but they must now finish the job in Europe: defeat Viktoria Plzen and reach the knockout stages for the second year in a row. 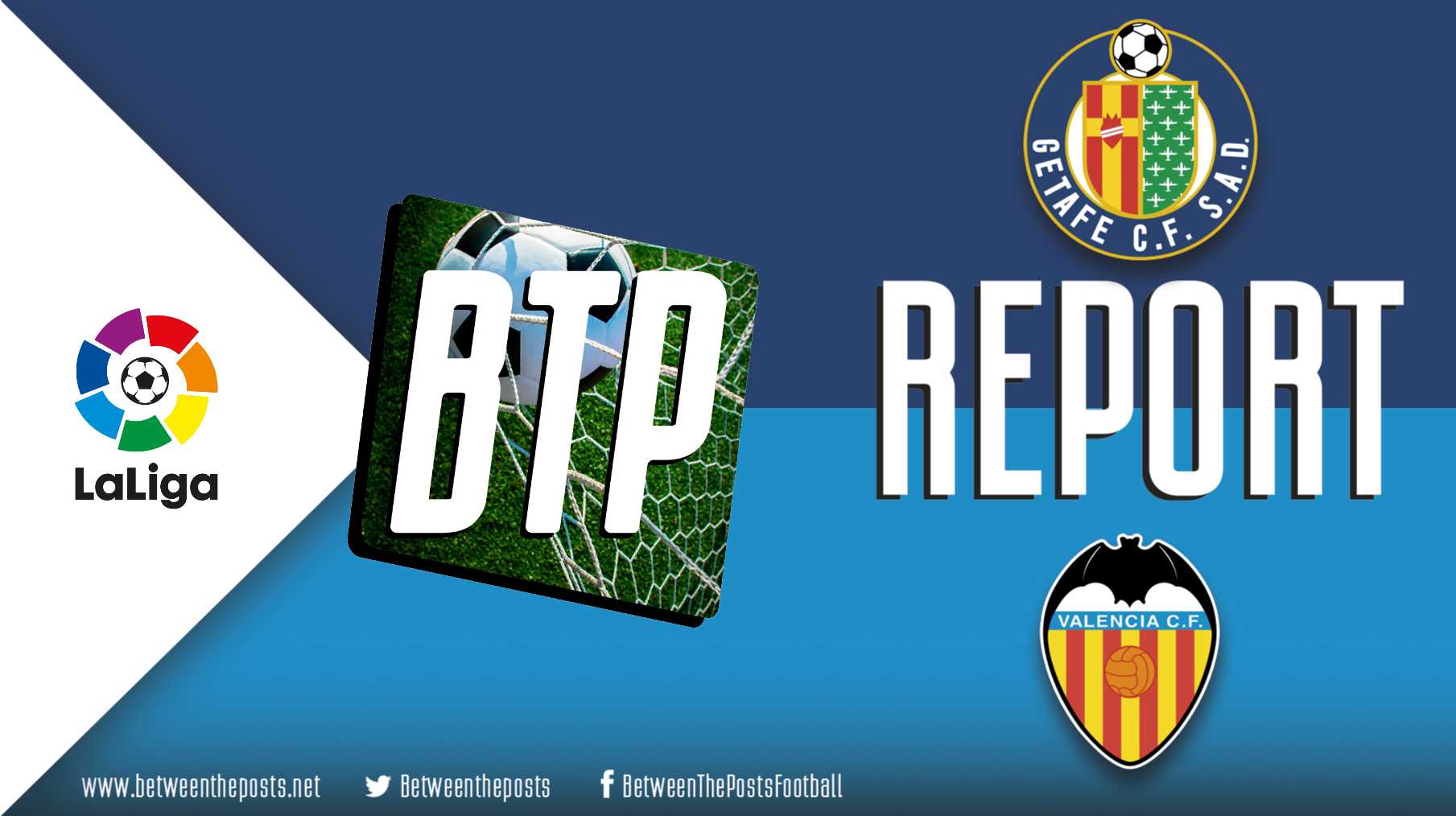