With Ronald Koeman at the managerial helm, this was the beginning of a new Barcelona chapter. A dazzling Fati performance highlighted the cohesive left flank of Barcelona’s 4-2-3-1 formation. From the support from Alba and De Jong to the central connections being constantly available, Barcelona’s left caused plenty of danger. Villarreal failed to deal with this threat as the game was effectively decided in the first 45 minutes.

Barcelona were kicking off their LaLiga campaign under less than ideal circumstances. This time, it was Ronald Koeman in charge after Ernesto Valverde and Quique Setién had an even split last season. The historic humiliation at the hands of Bayern Munich saw the prompt dismissal of the latter. Then came the post-season turmoil. Regulars under his predecessors such as Luis Suárez, Arturo Vidal and Nélson Semedo, had all recently departed, even though Koeman will be relieved he can still rely on Lionel Messi. The saga surrounding the Argentine’s potential exit may be most indicative of the club’s issues. All in all, it was imperative that Koeman got off to a great start to such a monumental task.

A 4-2-3-1 formation would shape the first official match of the Koeman era. There was a familiar look to the backline as Sergi Roberto, Gerard Piqué, Clement Lenglet and Jordi Alba all started while Neto was between the posts. Koeman deployed a double pivot Two central midfielders next to each other. in midfield as Sergio Busquets and Frenkie de Jong sat in front of the defense. The three in support of strikerl Lionel Messi were Antoine Griezmann, Phillipe Coutinho and Ansu Fati.

Unai Emery’s Villarreal would offer the first challenge for the Dutchman. The visitors had already started their league campaign and sat on four points after two games. In a 4-4-2 formation, Sergio Asenjo was in goal while Mario Gaspar, Raúl Albiol, Pau Torres and Pervis Estupiñán were the four ahead of him. The central midfield duo consisted of Dani Parejo and Francis Coquelin, both formerly of Valencia. Moi Gomez and Samuel Chukwueze were the wide players as Gerard Moreno and Paco Alcácer made up the front two.

Barcelona looked to create a 2-3-5 / 2-2-6 attacking shape as Villarreal were settled in their compact 4-4-2 defensive shape. Alba and Roberto would start in line with the double pivot and then advance as play developed. Fati and Griezmann would either occupy the halfspaces If you divide the field in five vertical lanes, the halfspaces are the lanes that are not on the wing and not in the center. Because there is no touchline like on the wing, players have the freedom to go everywhere. But this zone often is not as well-defended as the very center. This makes it a very valuable offensive zone to play in and a lot of chances are created by passes or dribbles from the halfspace. or hug the touchline. Messi and Coutinho operated more centrally, alternating to be the furthest forward. All four divided the tasks of receiving and combining between the lines or making runs to stretch the backline. The latter task was made more of a threat as Villarreal did not set up too deep. The fullbacks also got in on the act, making these runs regularly. There was not enough pressure by the Villarreal first line which also encouraged these long balls. 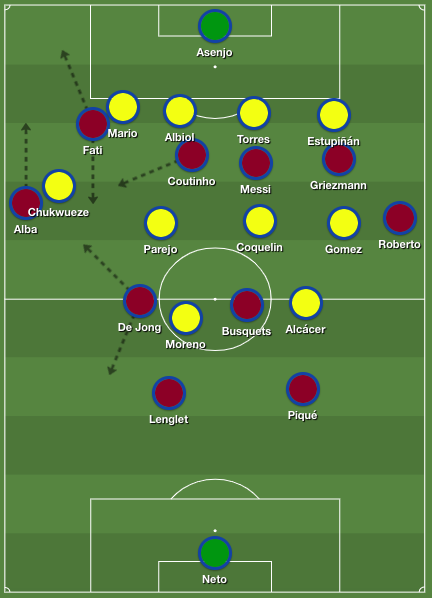 Common movements as Barcelona moved into a 2-2-6 shape while attacking down the left side.

Of the double pivot, De Jong was much freer to move around to create numerical superiority in various areas. Like he did at Ajax, he often dropped into the left center-back position to help deal with the first line of Villarreal pressure. Sometimes, he would move wide as Fati tucked into the halfspace. De Jong could even be seen in the forward line as Coutinho dropped deep on the left side. Their attack was certainly lopsided with the left side providing most of their threat. Fati and Alba combined well with De Jong in support. Lenglet’s passing from deep in that left center-back position was useful in bypassing pressure. Coutinho and Messi drifting towards that side, and not to mention the latter’s passing from the right, all made the left flank very dangerous. Griezmann did not receive the same support on the right in much the same way as Fati on the left. This led to him being on the periphery for seemingly large periods.

It was a 4-1-4-1 shape in defense for Barcelona. One of the double pivot would step up and join Coutinho further forward, while the other would monitor space in front of the backline. It was then the first line of Fati, Messi and Griezmann to initiate a high press. Villarreal generally played more direct, vertical balls so this high press was often not too aggressive. 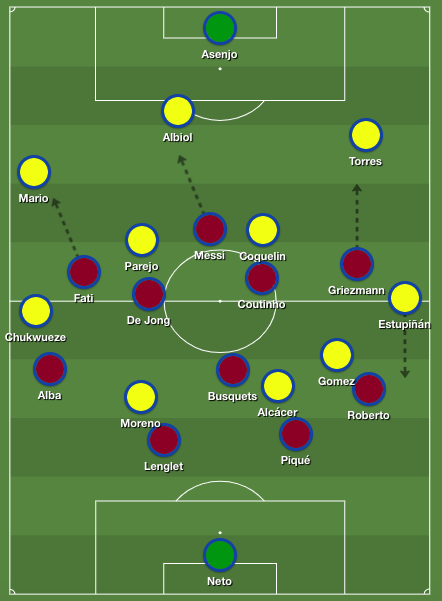 The usual setup as Villarreal built up from the back.

Building up, Mario was less advanced on the right than Estupiñán on the opposite flank. This gave Villarreal a three to build with which was assisted by the double pivot. They focused their attacks in the wide areas, looking frequently for the space behind Barcelona’s fullbacks as they were drawn inwards. Villarreal connected decently through the halfspace but often ceded possession when playing longer balls. Estupiñán, especially, was regularly free as Roberto was sucked in while Griezmann had not tracked back. This avenue was also available during transition with Barcelona usually having a 2-2 / 2-3 structure as transition defense. Villarreal’s failure to create chances, even when getting in good areas, meant they would struggle to get a result here.

It was the work of the young Fati which produced the match-winning goods for Barcelona. For the opener, Fati, in the halfspace, drew the attention of the advancing Alba’s marker. The ball was immediately sent in behind by Lenglet for Alba to latch onto with a step on Mario. He then pulled it back for Fati who was charging forward in support. A brilliant first-time finish gave Barcelona a fifteenth-minute lead. 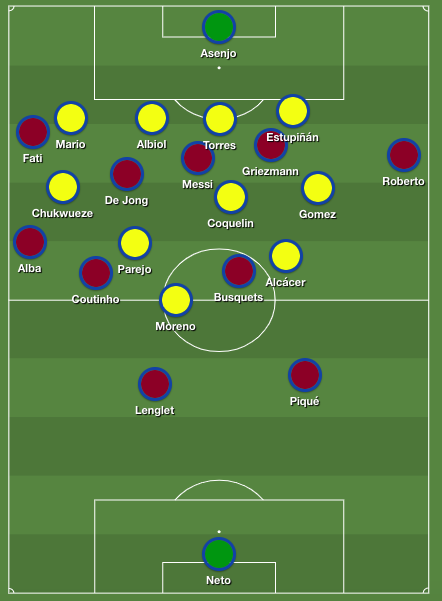 A left-sided rotation within the useful overloads for Barcelona.

Fati grabbed his brace off a swift punishment of Villarreal’s rare first-half high press. Six Villarreal players were in Barcelona’s defensive third. After some deep circulation, Lenglet played out of the pressure to Coutinho in acres of room in midfield. As Barcelona ran at a retreating Villarreal, Coutinho found Fati on the left, in space. The young winger coolly finished in the nineteenth minute.

In the 35th minute, it was Fati who drew the foul off Mario which resulted in a penalty. Messi slotted the penalty away to give the hosts their third goal. Messi was also involved in their fourth goal. From the left, he crossed to an unlikely target who was their most advanced player, Sergio Busquets. Torres, trying to intercept said cross, inadvertently put it past his own goalkeeper at the stroke of half-time. The match was truly done and dusted as a contest at this point. 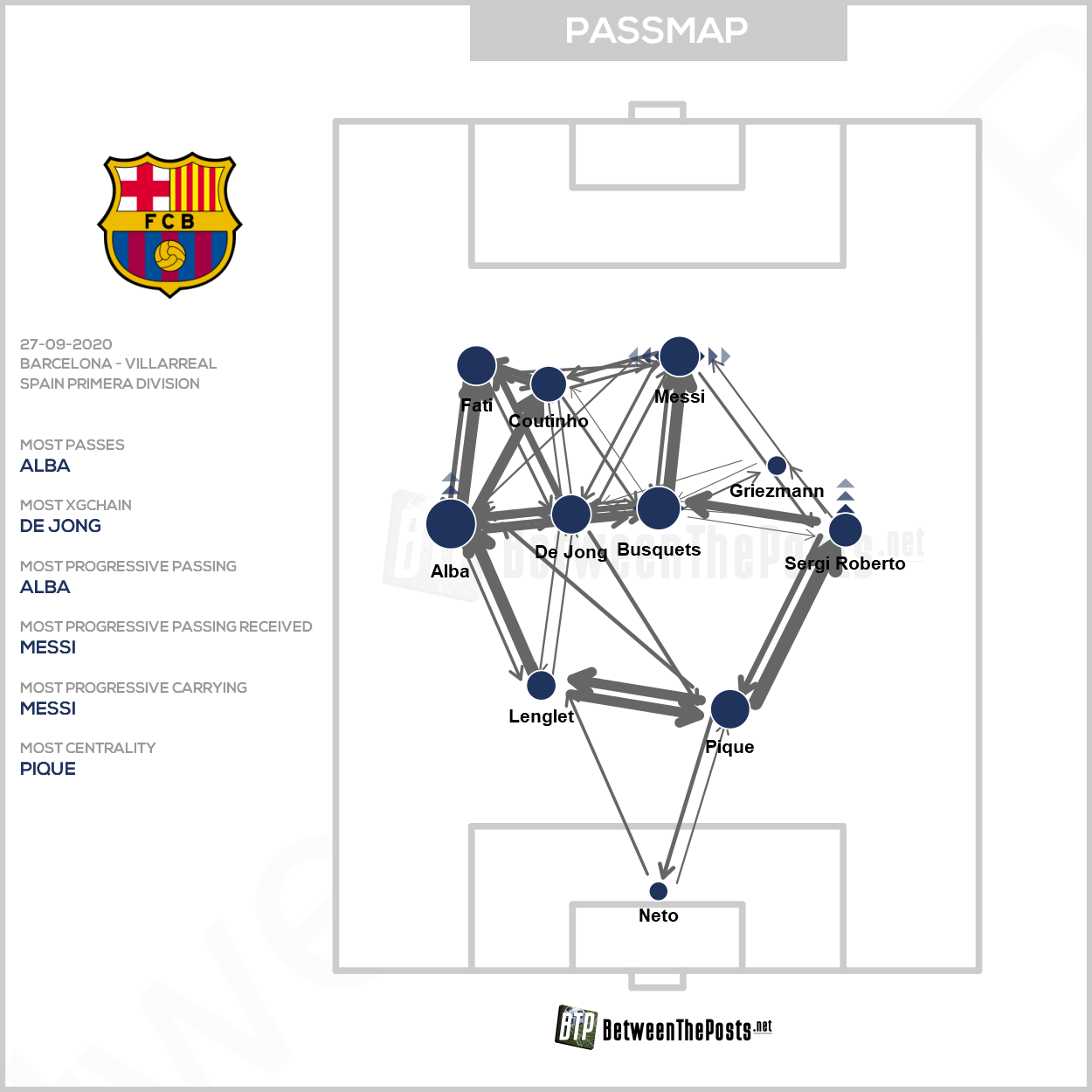 A calmer second half to close out the game

Out of the break, Emery brought on Iborra and Manu Trigueros for Coquelin and Alcácer. They shifted into a 4-5-1 shape with the two substitutes joining Parejo in central midfield. They pressed higher which forced Barcelona to play long and occasionally turn over the ball when deep. It was also easier to shift an extra midfielder to assist when defending out wide.

Going forward, they also sent more men forward as Parejo pushed slightly higher, leaving Iborra as a lone pivot. Villarreal were much improved but still failed to generate enough scoring chances from their promise. Barcelona were content to sit back more and wait for counterattacks. The home side still threatened but their wastefulness would go unpunished with the result already secured. 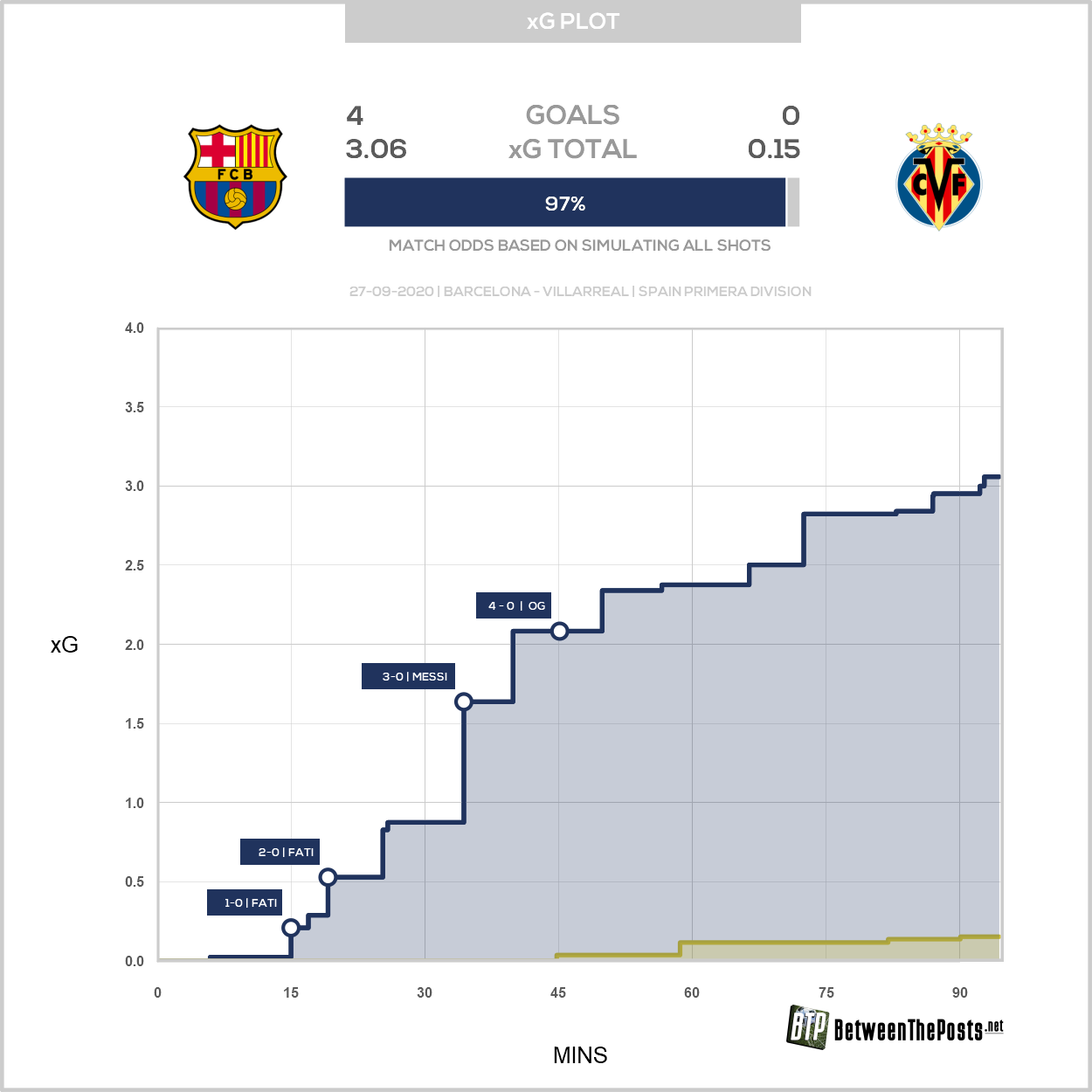 There are still some kinks that need to be ironed out by Koeman. The wide attacking was superb – but this was mainly on the left. Koeman may search for a more balanced approach to his attack. Furthermore, issues when defending their own wide areas were also evident. But overall, this was a great result and the bright performance from Fati was particularly timely. The emergence of attacking contributors, especially in the wake of Suárez’s departure, is vital to take some of the burden off of Messi.

Unai Emery would be hard-pressed to find many positives from this game. Villarreal offered little by way of goalscoring threat but still showed a glimpse into possible issues for Barcelona. Emery must quickly regroup his side as they prepare to host Alavés. Meanwhile, Barcelona go away to Celta Vigo next. 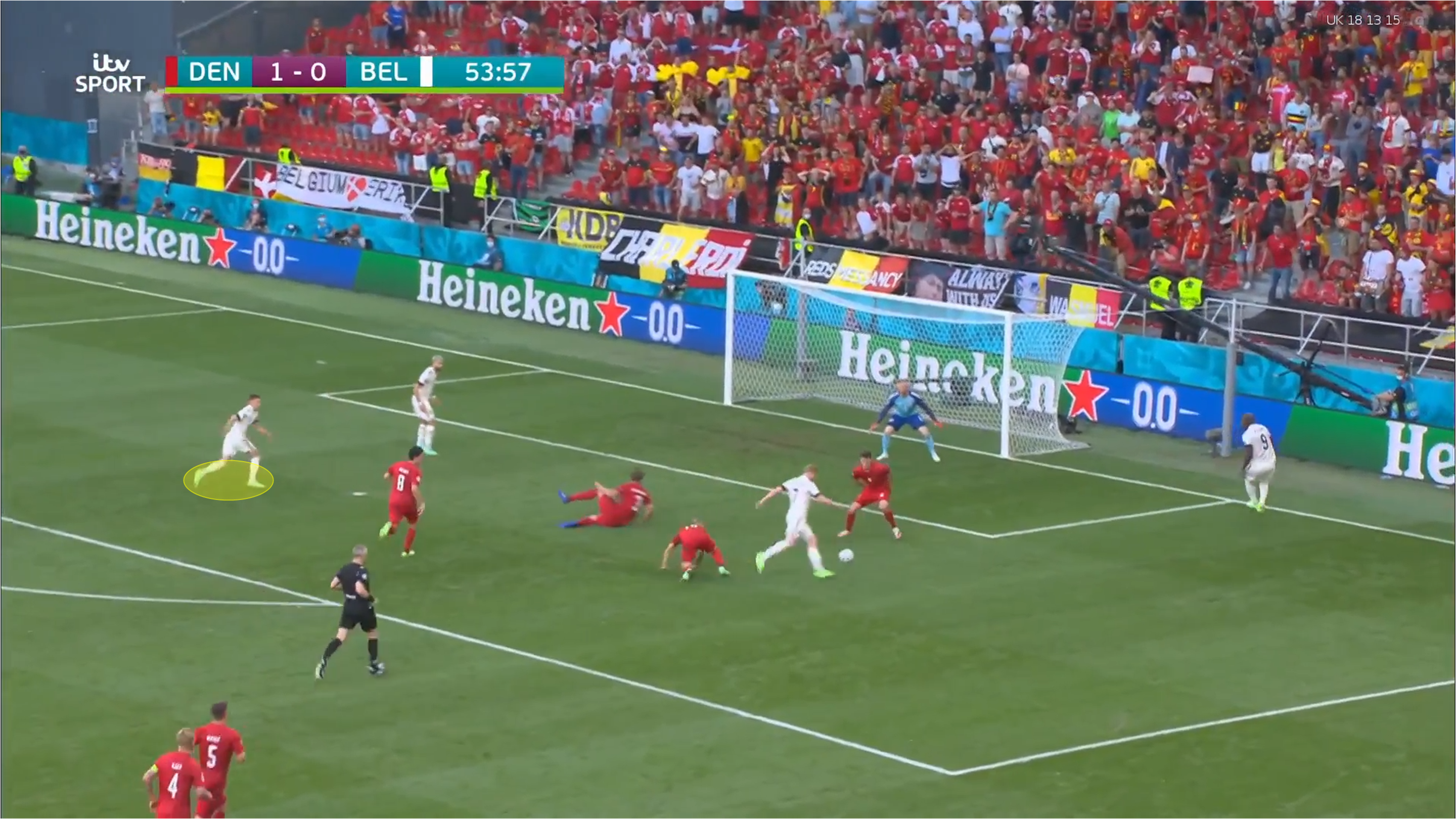 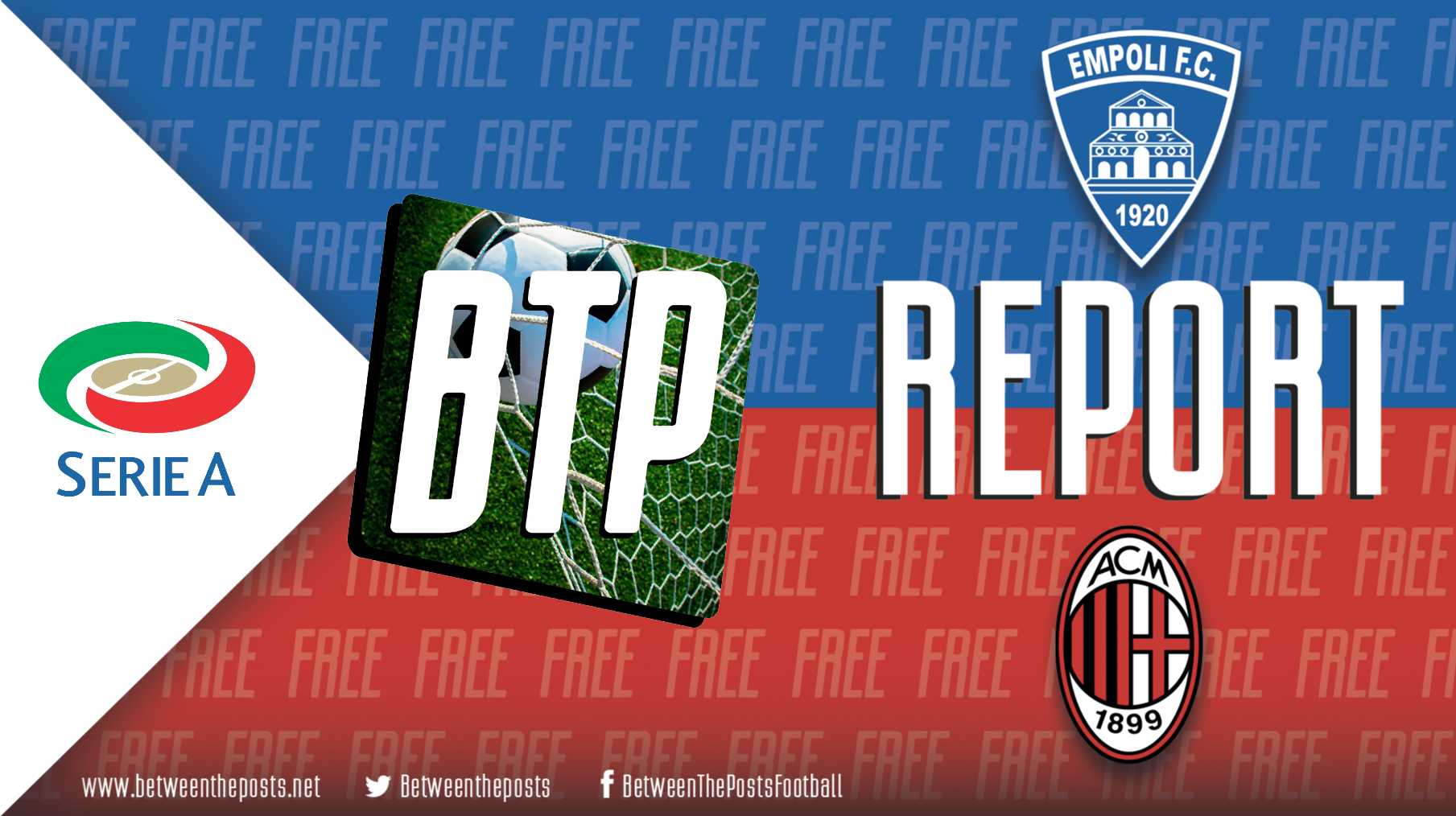