The twists and turns of another intense affair between these two sides seemed to be heavily influenced by Gladbach’s defenders and the aggression they did, and did not, showcase throughout – turning their press from impeccable to exposed. Marco Rose made several changes along the way, whichhelped to establish firmer control for the home side, who mostly dominated proceedings with and without the ball.

The eleven laid out for this pivotal clash for the Bundesliga leaders was fairly similar to that of the Leverkusen game, in which they won 2-1. Playing a similar back three system, where only three changes were made: Christoph Kramer and Jonas Hofmann were dropped from the midfield trio to see the returns of László Bénes and Denis Zakaria, and up top, the experienced Lars Stindl  came in ahead of Patrick Herrmann, partnering Marcus Thuram.

Roma were also on the winning end of a 2-1 scoreline, when they faced SSC Napoli on Saturday, and manager Paolo Fonseca was clearly impressed with his side’s performance, as the only changes made were through Leonardo Spinazzola and Mert Çetin. They exited the defense, to be replaced by Federico Fazio and Davide Santon. Otherwise, it was the same 4-2-3-1 setup also seen in the home match against their German opponents.

All about the buildup play

From the start, Rose’s side emerged as the most prominent pressers.

In a 3-4-1-2 press – which arguably looked more like a 1-2-4-1-2 shape given how aggressively the wide center-backs pushed onto Roma’s inside forwards – Gladbach were excellent at using their underload centrally and inviting the away side to play straight into trapped areas.

For instance, their attacking triangle was outnumbered by Roma’s, who started their buildup with two central defenders and two holding midfielders.However, they still pulled off an effective press, thanks to the near-sided striker’s curve press, the number ten’s close positioning to either defensive midfielder, and the short distance between the goalkeeper and the receiving center-half. This made it easy for Gladbach to direct play, whilst either forcing a riskier, aerial ball wide, or a flat pass wide to the far center-half.

And, because the initial near-side had then been sectioned off, Gladbach could now go man-for-man on the side of the ball, the close proximity of each teammate also putting them in a position to intercept passes predictably played straight down the halfspace If you divide the field in five vertical lanes, the halfspaces are the lanes that are not on the wing and not in the center. Because there is no touchline like on the wing, players have the freedom to go everywhere. But this zone often is not as well-defended as the very center. This makes it a very valuable offensive zone to play in and a lot of chances are created by passes or dribbles from the halfspace. into the forward. 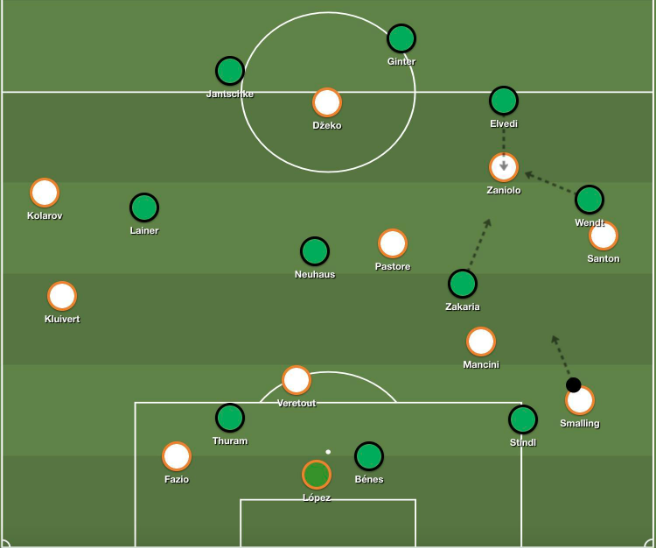 No matter how much space Roma’s players attempted to create by having the players either side draw their opponents out, the pressure of the tight-knit shape formed by the center-back, wing-back, midfielder, number ten and striker was altogether too intense and could narrow in on the receiver intensely by the time the ball had reached their feet, if it even made it that far.

Roma’s four most offensive players were largely inaccessible. This was down to the wing-backs and center-backs; the wing-backs never held particularly wide positions themselves, but instead narrowed in, meaning they could also double up on those direct passes into players inside, and in defense of the simpler passes wide., They were then already positioned inside to block pass attempts aimed at the center, which was exclusively the case since Roma did not use their forwards to come wide and stretch the isolated back three like they probably should have done.

For all their good pressure, though, it was hard for the hosts to create any significant openings, as the nature of their man-to-man press meant they were also instantly matched up after a turnover, so Gladbach were limited to shots from range which provided them with very little substance.

What did lead to some better chances, however, was their buildup, in their 3-5-1-1 formation. The home side knew Roma would press in a 4-2-3-1 shape and man-mark the three defenders as well as the number six, and Rose made use of this by using a clever rotation, which involved Stindl as the beneficiary.

Since the central midfielders had to be marked by the defensive midfielders of Roma, their pendulum-like movements in support of the near side, but mostly down the left, saw the receiver have time to receive whilst also drawing open the space behind the presser. In stepped Stindl, who, from a ten position, would move wide to fill that space and become directly accessible, since the wing-back would act like a winger, positionally speaking, to pin back Roma’s defensive line. Then, they were free to shift it across to the far side where the other central midfielder was waiting to charge into open space. 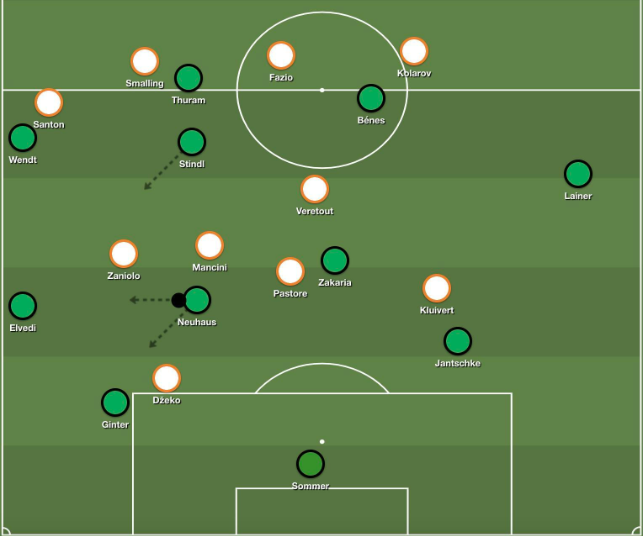 In the thirteenth minute, the same blueprint was carried out, except Stindl was the far-sided receiver whose driving run through the halfspace allowed him to take on a shot across goal, but it was placed narrowly wide.

This was not the only way Gladbach exploited this space, however, they also did so by utilizing Thuram’s aerial ability. So, by drawing out that space behind one side of midfield, they could also isolate Thuram and have him win a knockdown for the overlapping When a wide player, most of the times a wing-back, runs outside to fill in the space left by a winger going inside with or without the ball, this is called overlapping. fullback. This worked to a tee in the sixteenth minute, when the fullback won the second ball, returned it to Thuram, who then got to the by line in the one-versus-one duel – a situation Gladbach also attempted to frequently create given the striker’s multitude of skills. Here, though, things were not quite falling the home side’s way, with the header back across falling short, as well as the shot attempt before Zakaria narrowly curled one over the bar.

Finally, though, and quite a bit later following plenty of Gladbach control, they finally pushed ahead. On the counterattack in their 5-2-1-2 shape, wherein the strikers often stayed close to one side, allowing them to receive quite freely short after turnovers. Here, Thuram received and laid it off for the vacant number ten, who then set the Frenchman back off down the channel. Winning another wide one-versus-one duel, he got to the by-line again and, despite not exactly finding his teammates, his drilled ball across the face of goal was enough to force a terrible mistake from Fazio which saw him put it into his own net.

Roma fight back in the second half

After a quiet first half from the away side, they did eventually find themselves getting back into proceedings, and in ways similar to ones they tried in the first half. The key difference was that Gladbach’s center-backs were not nearly as positionally aggressive as they had been. Be it for the sake of defending their lead or just through fatigue, it was costing the home side and opening up spaces for key attackers to receive in.

Edin Džeko, who had been a target man in the first half, was one of the main routes out, using clipped balls into him for attackers to run off of, mostly through Justin Kluivert. The Dutch attacker frequently did this to get in behind but was typically very well challenged. This space given up also meant Roma’s wing-backs could play inside to the narrow forwards or into the number ten, which could set off quick transitions to the far side and then back in, with little recovery time for the hosts. This gaveJavier Pastorea chance to shoot free on the edge of the box, which was brilliantly tipped over the bar by Yann Sommer, just prior to the hour mark.

The same threat posed by the number ten was at the heart of Gladbach’s problems five minutes later, when Pastore received in that pocket of space and was able to play Džeko in down the side of the central center-back. Despite not making much of the situation, Roma managed to win themselves a free kick diagonally out from the box. Fazio was neither tightly marked up Zakaria nor Oscar Wendt, meaning the Argentine could get a run in on the whipped delivery where his volleyed effort jolted the net, amending his earlier mistakes to draw the visitors level after 64 minutes.

Particularly after Rose’s reactionary change to a 4-2-3-1 system in attack, the game became very open-ended, with each attacking contingent notably detached from their midfield base, meaning there were constant four-versus-four scenarios, as  the defensive pairings in midfield lagged behind.

What this meant was a repeat of the shape we saw from Gladbach in the 1-1 draw, where the number ten and one of the wide midfielders dropped in, whilst the other wide midfielder and striker split wide of them to run into depth and create a 2-2 shape in the center. So, now we were seeing plenty more balls drilled into the space in front of Roma’s defense again, which proved particularly ideal here given the aforementioned dichotomy of the structures.

In the seventy-second minute, this strategy almost worked to a tee when one of the attacking midfielders accessed the other on the far side in transition, with Thuram, on the left, overloading When one team has more players in a certain area or zone than the other team. the fullback with his position ahead. He would have been through had Florian Neuhaus’ short layoff not been so sloppy. Thuram still managed a follow up shot towards the far corner but that was easily saved.

It was counterattack after counterattack from there, with Kluivert’s blistering pace always lingering on being devastating but without any true incisiveness due to some excellent individual defending.

For the remaining five minutes added through stoppage time, Gladbach were all hands to the pump looking for a crucial winner but were coming up short each time. Eventually, though, they got their break.

In the very last minute of the match, Zakaria recovered the ball on the farleft side, following a poor set-piece; he then floated a cross to the back-post to find substitute Alassane Pléa, whose header managed to find Thuram, as he coolly glanced it into the far corner to seal victory for Gladbach. 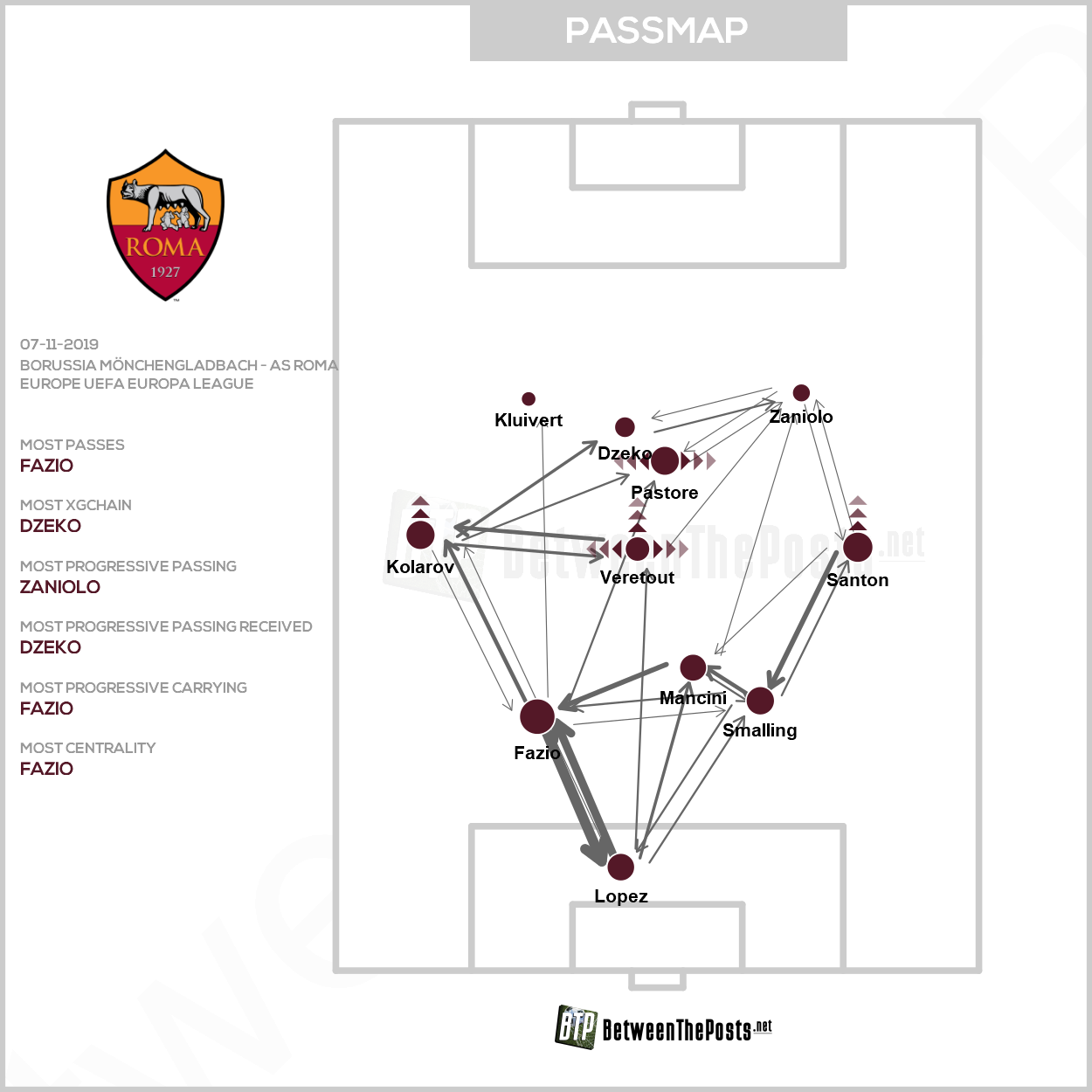 Rose’s Gladbach continue to be an unstoppable force, and their performances against Roma show just how strong an outfit they are. Their tactical versatility in attack and defense proved key, here, in solving the puzzles posed by Roma’s sturdy 4-2-3-1 system. Additionally, the win has moved them up into second through the head-to-head rule, two points off the top spot, having been on the brink of exiting the competition just a fortnight ago.

Much like it was the case before for Gladbach, Roma, despite showing strong league form (currently sitting in third place), must now prioritize their away match in Istanbul in three weeks’ time, as a win is paramount. 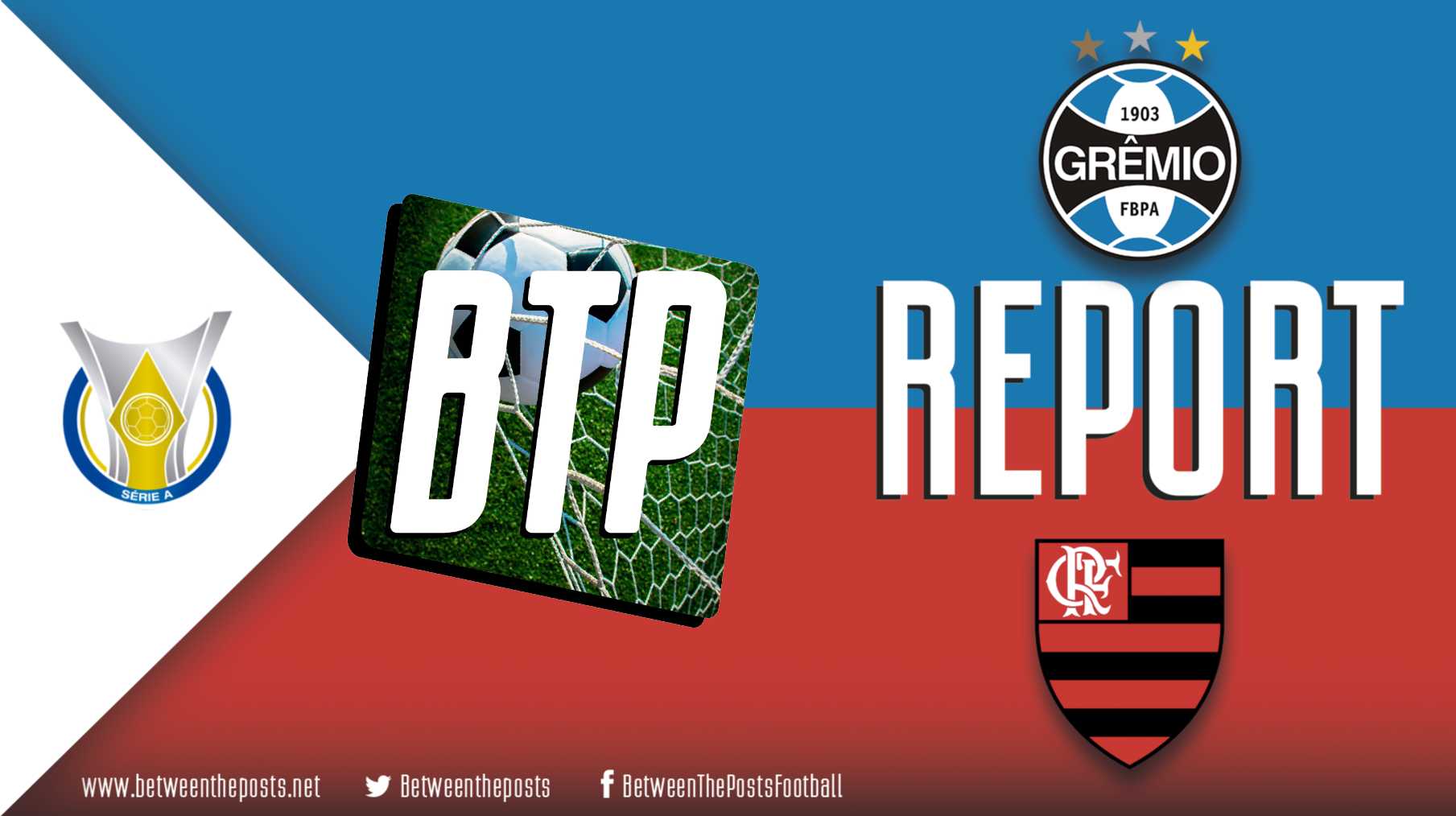